A social media platform can be just as big a success in the absence of interactivity.

In 2009, Ben Silbermann, Paul Sciarra, and Evan Sharp ideated and gave birth to a product that they coined as “catalogue of ideas”. The product was concentrated on bringing Discovery and Innovation on the forefront.

What started off as an introvert’s haven, soon became the house of some of the most creative minds of the world, who came to the platform looking for ideas and hobbies.

The idea that backed it, bagged it 50 Best Websites of 2011 award from the Times Magazine. And today, after 8 years, its application hosts over 291 million monthly active users.

This product that took an off-stream approach and created a new business model & industry standard was Pinterest.

In addition to being a non-intrusive platform, Pinterest has set a benchmark for businesses: giving them a path to succeed on both user engagement and business revenue front.

Pinterest is a social media platform which enables users to share media related to goods, services, and projects and discover new interests by looking at the images that others have posted.

Users normally save a.k.a pin the images they find on the web or Pinterest on different boards on their profile. Most of the images which are saved on Pinterest are clickable and are opened in a new tab when clicked.

B. At the beginning of this month, Pinterest launched a refreshed new look of its Android and iOS app version. The four most visible of those new features were – Lesser space around Pins, Personal recommendation at top of home feed, Search option in main navigation bar.

C. Getting more conscious about its users mental health, Pinterest trained its algorithms to identify disturbing content and remove it from the application.

The feature set that Pinterest comes with is fairly straightforward and concentrated to one purpose – saving and sharing ideas. Here are the features that carry an impact on Pinterest like app cost estimate:

Similar to maximum of applications operative in the market today, Pinterest app too offer users  the functionality of creating an account and logging in. To expedite the process, the app offers the option to do social media logins.

Pinterest home screen is made of slab like portrayal of media that users can then choose to Pin or scroll through. This part of the application is governed by Artificial Intelligence technology. The feed gets adjusted on the basis of what you show interest in on the feed.

This is the section that users make use of to search for pins related to the topic of their interest. Pinterest has been making a lot of effort to make the search functionality advanced and extremely precise.

This feature is what majorly answers how does Pinterest app work. When users click on a pin they are given two options – A. Put the pin in a board B. Share it with their friends through different mediums. This is one way how Pinterest betters their user engagement numbers.

Pinterest gives users two options when it comes to creation – Pin and Board.

You can either create a pin by uploading a media element from gallery or capture picture from the camera. You can also create a board wherein you can add multiple pins related to the topic of your interest.

Once created, you can modify the pins on the board or delete it – pin/board – altogether.

This part of the application shows users what people they follow have saved in the app. It also comes with a recommendation tab, giving users to find new people/accounts to follow.

Pinterest use this re-engagement marketing technique perfectly by sending notifications to users related to their boards, new additions made in the pin type they have shown an interest in.

Denoted as ‘Saved’ this is the user profile section of the application. This details the number of followers and following, boards and pins that they have created and saved. Here, the users also get a Sort feature which gives them the facility to either sort their boards according to alphabetical order or time wise.

Although not main or must-have, these advanced features are one that make Pinterest what it is. These tend to carry an impact on the cost of Pinterest like app development, greatly.

Pinterest gives users the functionality to create board and invite their friends to collaborate in it. This makes it possible for them to make plans together and work on it.

While not originally in the plan, Pinterest gives users the functionality to react to a pin through emoticons.

Stepping one step further in the social media game, Pinterest gives its users the ability to send messages to other people from inside the application.

When you enter a search term in the app, Pinterest gives additional queries for you to select from. This makes the search process a lot more advanced and engaging.

When you create a Pinterest mobile app, you don’t just have to consider the features set. What makes the app truly special is the experience that it offers to the end users through its design.

When Pinterest started its operation, there was little to no focus on design principles. The focus, back then, used to be entirely on offerings. That was the time when Pinterest UI looked like this: 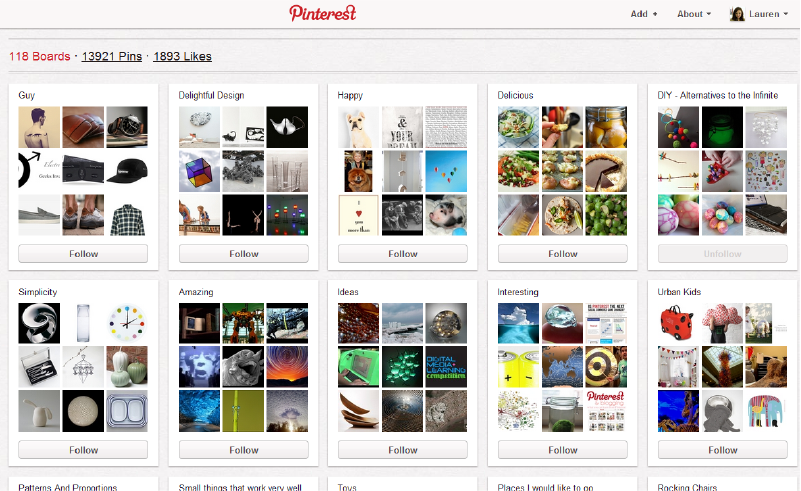 It was in 2017 when Pinterest’s product design team brought the corporate focus on the changing the app design on phone.

The foundation that they set for the app was –

The foundation principle gave birth to a revamped app design that focused on white space and intuition. The two factors that played a massive role in taking the app’s engagement off the charts. 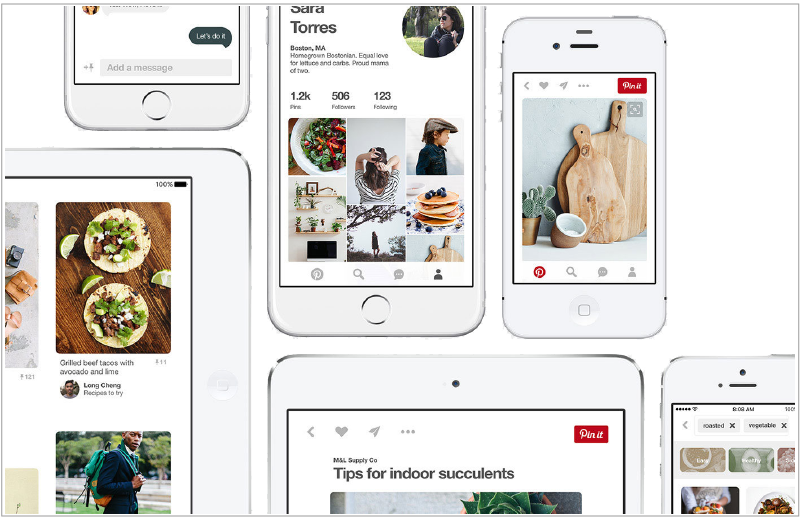 At Appinventiv, we perform a series of research to back the UI and UX of an application. We start with a product discovery workshop which lasts for 5 days. This, lets us create wireframe and mindmaps which help set the future of user experience. We also follow a series of UI/UX trends to ensure the app design is extremely on-point, right from the onboarding stage.

This is something our clients would find in our estimate of the cost of developing app like Pinterest.

Beside the designing process and elements, the other factor that is included in the Pinterest clone app cost breakdown is the technology stack.

Pinterest, as an application grows continuously, both in terms of the users count and the ads business. Increasing with it is the review volume. In order to answer the question of how to develop Pinterest like app, businesses will have to work around technology stack that solves the flourishing operational and engineering challenges at scale.

The cost of Pinterest like app can be estimated upon the study of the factors that would go into it. While design is one of those, it is not the only one. There are a number of things that come into play in the cost of app development range.

While the choice between Android and iOS for startups depends on a number of factors, it is interesting to note that Pinterest can be accessed as a website, PWA, and Native app.

So, if you want to make a Pinterest replica, you will have to create four versions of the app.

We generally advise our clients to get an MVP developed and validated first, before going live on multiple platforms. It is only after you have tested your product in the market should you go with iPhone application development company or Android app development company.

Developing the frontend and backend of the application takes up the majority of the developers’ time along with adding on to the cost of Pinterest like app development. While the efforts required to do Frontend development is still less compared to Backend, it is not unimportant.

Now when we talk about Backend development, there are two options available to businesses – Monolithic and Microservices with latter being more expensive than the former.

There are a number of elements that defines app complexity – features set, the tech stack that backs it, the design elements, etc. It is the app complexity that differentiates a $10,000 app from a $100,000 mobile app.

Pinterest in itself is a mid to high complexity app. But it’d depend on your business choice whether you want to make your app complex or not.

Location of the agency

The cost of developing app like Pinterest also depends greatly on where the development agency is located. An agency based out of the USA or Australia will charge a lot more than agencies based out of Eastern nations like India.

The next part to attend to after knowing the Pinterest like app development cost is to plan how you would earn money on it.

Pinterest mainly earns its money through advertising, more specifically promoted pins. These promoted pins are the advertisements which appear similar to the user generated posts.

If you are following the Pinterest route, the answer to how much money you can earn will also majorly revolve around advertisements.

Yes. Pinterest offers an API. It allows developers to offer Pinterest’s Pin feature inside their application.

There are a number of applications that have emerged as Pinterest’s competition. The top three of them are – We Heart It, Jux, and Gentlemint.