Seven Reasons Why Native App Development is a Better Solution

Since the advent of web apps, native apps have faced a lot of flak for being costly, sluggish, and platform-dependent. But the superior user experience, enhanced security and amazing native capabilities of these apps can beat the lights out of any web app in the market. Backed by the goodwill of App Stores, native app development  makes for an excellent investment.

This blog explains succinctly the advantages of native app development over web app development. Later, it elaborates how developers can create a wonderful concoction of native and web apps through React Native-based hybrid apps.

Native apps are stored on the device so their processing speed is not dependent on internet connectivity or bandwidth. Moreover, these apps utilize a device’s native programming language and APIs to operate. So they run extra efficiently.
In contrast, web apps are actually a bunch of web pages tied together with browser technologies. They just give the look and feel of apps but are HTML-powered user interfaces. For any action to be performed in a web app, calls are made to remote web pages. The speed at which processing occurs is dependent on internet connectivity in the vicinity.

2. They have the App Store advantage.

App stores only feature native mobile apps. And app stores are undeniable one of the most important marketing channels for any app. When a person is in need of a new app, the App store will probably be the first play they’ll look for it. If your app is listed there, its chances of being discovered are greater. There are ways your app can be made more prominent in App Stores. Since native apps are backed by App Stores, they are perceived as the hallmark of quality by most users.

Another big thumbs up for native apps is that their monetization (commission, revenue, etc.) are taken care of by the App Stores from where they are downloaded. For web apps, payment systems have to be integrated within the app.

Native apps can leverage the in-built security features of a device’s operating system. Plus, performance enhancement updates of the OS are also available for native apps. Mobile device management feature allows users to take remote control of their app and protect its data from encroachment or compromise.

Web apps, on the other hand, are more prone to security threats since they work on the non-standard programming codes made using HTML, CSS and JavaScript.

4. Scalability and enhancement are non-issues

New features can be added to native apps easily and rapidly. The unlimited APIs available for native apps can render your app scalable and better. If need be, new APIs can be created for crafting features that aren’t provided by existing APIs. Conversely, web apps can work only within the limits of the web browser facilitating them. So they aren’t as flexible as native apps.

Mobile devices have super features such as camera, GPS, touch screens, integrated calling and microphone. Native apps can utilize these features with ease. Leveraging these capabilities within a web browser can be challenging and cumbersome.

Native apps delight users with the kind of UI and UX they have come to expect from their handheld devices. Web apps give the look of inherent apps but not their feel. They cannot function as seamlessly as native apps. Web apps also give a monotonous user interface across all devices that rarely matches the spectacular user experience provided by native apps.

7. These apps run offline too

One of the biggest advantage of native apps is that, unlike web apps, they don’t need internet to run. Since they are stored within a device, native apps can be worked on the move, in a desert, forest or anywhere else. Web apps are hosted on web browsers that can be accessed only when online. So, if using web apps, you will be hindered by wavering internet speed, connectivity issues and hefty internet usage charges.

Native apps are secure, efficient and delightful. This is what makes native apps the preferred choice of most quality developers and vendors. This certainly doesn’t mean that the affordability and rapidity of web application development can be dismissed lightly. Most people find themselves at a veritable crossroad where they are compelled to compromise and settle for cheaper, quick-to-market web apps at the cost of native apps that offer better user experience. 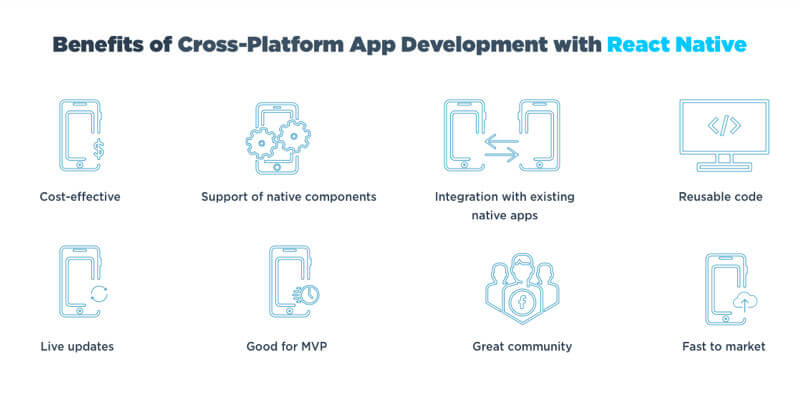 But Facebook’s React Native has changed the rules of the game. React Native apps combine the performance factor of Native Apps with the ease of development of Web Apps. This JavaScript library helps build amazing user interfaces that render flawlessly on all devices and platforms consistently.

React Native has components corresponding to iOS and Android and these components can be used time and again to give native look and feel to your app, regardless of the device on which it resides. The speed and functionality of React Native apps is no less than of Native apps. Additionally, these apps can be built in agile frameworks that are speedy and efficient.

If you don’t wish to overhaul an app; instead you want to utilize its existing code- React Native Applications are the answer to your prayers. Your Cordova or Ionic code can be reused as a plugin in the React app. So, no coding!

React Native is easy to pick up for JavaScript programmers. It does away with the need for learning Swift or Java for Android. Essentially, front-end programmers can turn developers and coders by using React Native application development.

Facebook has made React Native open-source, meaning there is a distinct possibility of compatibility with Windows and TvOS operating systems, in the near future. If that happens, React Native will have all bases covered and beat rival framework undisputedly.

Native apps are slower to develop and deploy than web apps. But React Native apps bring agility and speed into the system. ReactJS’s simple programming strategies and better performance enhance the efficiency of these apps.

You don’t need a Web View for loading third-party plugins. They can be incorporated within a React app and they load fast and ensure a smooth ride, even for devices with older versions of operating systems.

So, as we have covered in this blog, Native mobile apps score over web apps in a multitude of ways. And with React Native-based hybrid apps, things are looking even brighter. But, if you want a detailed information about these technologies before choosing one, consider our mobile app development guide today.