Node.js vs Golang: What to Choose?

What makes a mobile application successful? Regardless of how much you appreciate the design and idea, the truth is that the prime pillar of app success is its Backend. The better the application serves the business logic and perform all the tasks effectively and smoothly, the better outcomes it delivers.

Now, while this clears that paying attention to the app backend is imperative, the question that arises here is which tech stack to consider for backend development – especially when you have a myriad of options including PHP, ASP.NET, Node.js, and Golang.

As we have already compared the former two, i.e., PHP vs ASP.NET last year, let’s pay closer attention to the latter two, i.e, Nodejs vs Golang in this article.

But, before we jump into the crux of this article, i.e, comparison of Node.js vs Go, let’s refresh our basics first. 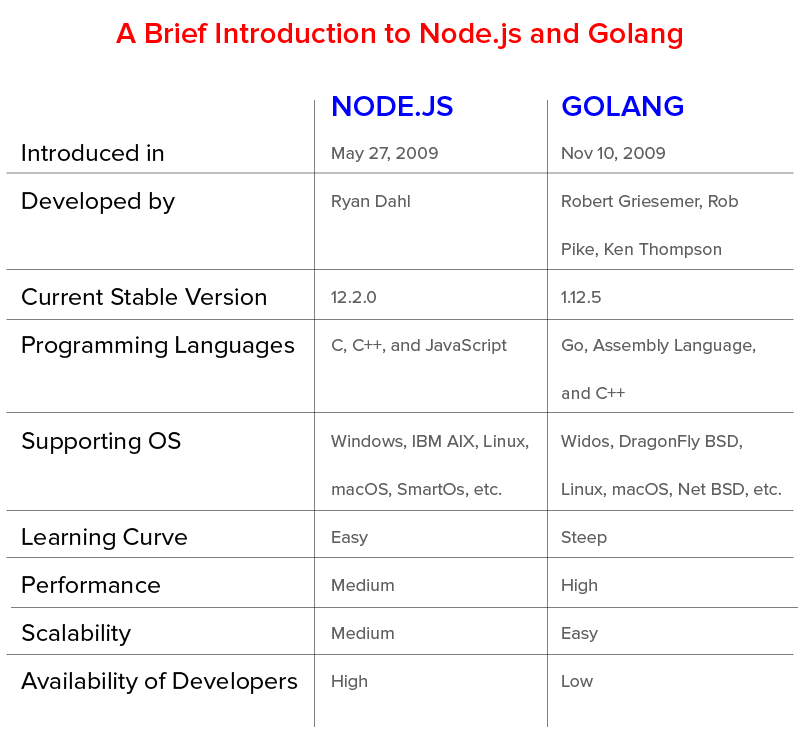 Though the introductory image throws some light on both the backend development tools, for better clarity, let’s look into what Node.js and Golang actually are and what benefits they offer.

Is Node js a programming language? While many developers and businesses call Node.js a programming language or a framework, it is actually a cross-platform environment that runs on Google Chrome’s JavaScript engine, V8. It was founded back in 2009 by Ryan Dahl and is known for serving developers with a complete library of different JS modules that simplifies the web and mobile app development process.

The framework, as per Node-by-Numbers report of 2018, has 368,985,988 downloads and over 578 new contributors in 2018 itself – which makes it nearly impossible for the developers to overlook it. But, the prime reason why developers feel magnetized to the idea of investing in Node.js development is the set of benefits it offers – a few of which are:-

Golang – What’s So Special About This Backend Technology

Golang, also called Go and Google Go, is an open-source, cross-platform, and statically typed programming language. Introduced in 2009, the Golang framework resembles C++ and Java in terms of code and is one of the Top 18 Programming languages as per Tiobe Index for May 2019 because of the following advantages of the Golang language:-

So, as you have seen so far, both the server-side programming languages/frameworks come with a heap of opportunities and facilities. An impact of which is that both the  backend technologies are highly preferred in the market by both startups and well-established brands – a glimpse of which can be taken from the image shared below:- 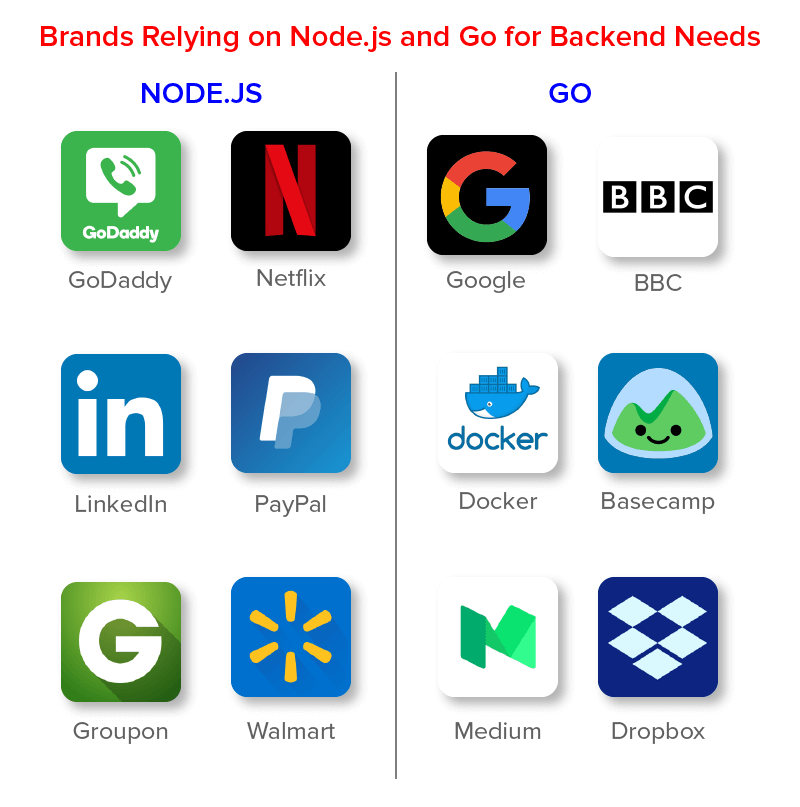 However, this is not enough to determine what is best for your project. Right?

Considering the same thought, let’s uncover which server-side environment is optimal for your app development needs – nodejs vs golang – based upon different parameters.

Factors to Consider While Node.js vs Golang Comparison 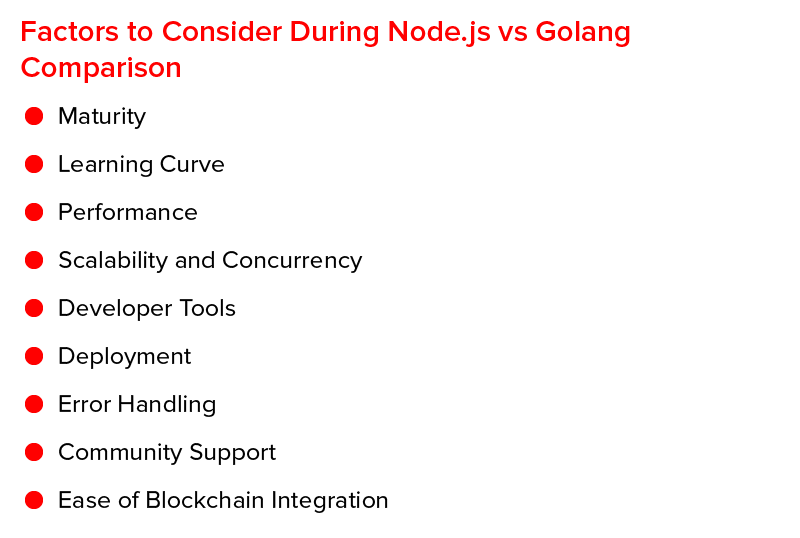 Though both Node.js and Go entered the market in the same year, the latter is more decent and mature. And the reason behind this is that the former, i.e, Node.js operates with several APIs that undergo continual changes.

Another factor that contributes to the process of determining which is the right backend tool is Learning curve.

On one side, Node.js, being one of the top JavaScript frameworks for 2019, relies on JavaScript. This makes it easier for one to learn and begin developing a solution in Node.js environment.

Whereas, on the other side, Golang is a complete language in itself – making it necessary for a web and mobile application development team to be familiar with basic rules, processes, pointers, and programming concepts before starting with it.

This signifies that Node.js is simpler to learn and thus, is preferred over the other option in the Node.js vs Go battle.

When considering go vs node js performance, Go wins the credit of being the best backend development tool among the two because of its lower app loading and response time.  This is because JavaScript, the language on which Node.js platform relies upon, takes more time for executing code than what is required in the case of Go. Besides, Go for backend development has also proved itself as a leader in terms of memory-bound tasks and raw CPU performance.

Node.js is a single-threaded platform where the instructions are executed in a particular sequence. While this seems like a good practice, it creates more challenges for developers when considering large apps with massive scaling and needs for the execution of different processes in parallel.

However, when considering Go, the language offers better concurrency options than JavaScript and enables developers to work with multiple threads at the same time without using much RAM.

Node.js comes up with a heap of ready-made solutions that simplifies the development process and cuts the cost and time required. For example, NPM in Node.js environment consists of 800,000 built-in building blocks which developers can install and run efficiently and effortlessly as per their requirement.

Go, on the other side, has a standard comprehensive library with features that act independently of any third-party. Because of this, Go has less number of tools than Node.js – making the latter the answer of which is better – Node.js or Golang.

When you consider using Go and Node.js for software development in terms of deployment, the former proves to be a better option. This is because Node.js demands installation of NPM (Node Package Manager) on the server, or the need to pull down app project code with pm2 on the server for running it effectively. But, when it comes to Go-based backend app development, there is no need for any locale. The binary generated from the build is automatically dropped to the server. This makes the developers find it worth switching to Go from Node.js.

When talking about who will win in the Golang versus Node.js battle in terms of Error Handling, both the platforms deliver optimal solutions. While Node.js goes with the convention ‘try…catch’ error technique, in which errors are caught just the moment they occur, Go requires explicit error handling when the program code is flowing in a uniform manner.

Another reason why developers prefer Node.js over Golang is that the former has a wide and vibrant open-source community, with thousands of contributors and support from various popular brands such as IBM, PayPal, GoDaddy, Intel, and Microsoft. But, when it comes to Golang, the language has comparatively smaller community.

Since the idea of Blockchain app development is attracting almost everyone in the industry, it can be a profitable decision to consider blockchain integration as a factor when considering Node.js vs Go.

So, as you can depict from what we have covered so far, there is no perfect language/tech stack that fits every project requirement. While Go is the optimal server-side environment for microservices and enterprise projects where you need to deal with high loads, Node.js is used by Node js development company an ideal choice to mitigate development challenges using the ready-made solutions and design a custom app in lower time.