If you are even a month old in the world of mobile application development, the probability of you have not heard of the concept of Technology Stack is very minimal.

No matter what mobile app development process you are planning to follow, it would never turn fruitful until you get together a set of robust technology stack. Technology Stack is what decides the future of a software product.

Well, we will get to the exact definition of tech stack in a while. For now, here’s the snippet – The present and future of your mobile app depends on nothing but your mobile app technology stack.

In this article, we will be looking into the concept of technology stack for mobile application in more detail, while throwing the light on the importance of knowing the technology stack that your mobile app would be based on. We will also talk about the tech stacks that power the apps on the basis of their type.

What is a Mobile Development Technology Stack?

The complete technology stack for mobile application development can be divided into four areas. And these are also the areas that also constitute the anatomy of an application.

Here are the four components which together make one Technology Stack –

Backend Development – The part which takes the user input, processes it, and convert it into an output

Development Platform – The place where interfaces and libraries come into the picture to design and develop the mobile application.

Why is it Important to Find the Best Tech Stack for Mobile App?

There are a number of elements that are dependent on the selection of the right mobile app tech stack. The probability of whether your app is robust or will it be able to scale to different operating system versions, relies heavily on the technology combination that you choose for its development.

Any wrong or hasty, uncalculated decision with respect to the selection of nothing but the best technology stack for mobile application, will affect its current performance and future growth prospects negatively.

[Extra: Talking of Cost, Know how much does it cost to develop a mobile app]

Since you now know what tech stack is and why it is important to know the technology stack, let us come to the section where we look into the technology stack that powers the development of powerful, scalable, and innovative mobile and web apps that comes out of the factories of any skilled app design company and their development domain.

Native apps are known for their robustness and performance. The quality standards that a business usually looks to achieve in their mobile journey are the ones that their investment in Native App Development perfectly solves.

Native Apps allow businesses to integrate the device’s in-built functionalities in their mobile app, without calling for an external third party API.

Now, when we talk about Native app, we usually talk in the context of Android and iOS App development. The two platforms come with different capabilities, which call for different technology stacks as well. 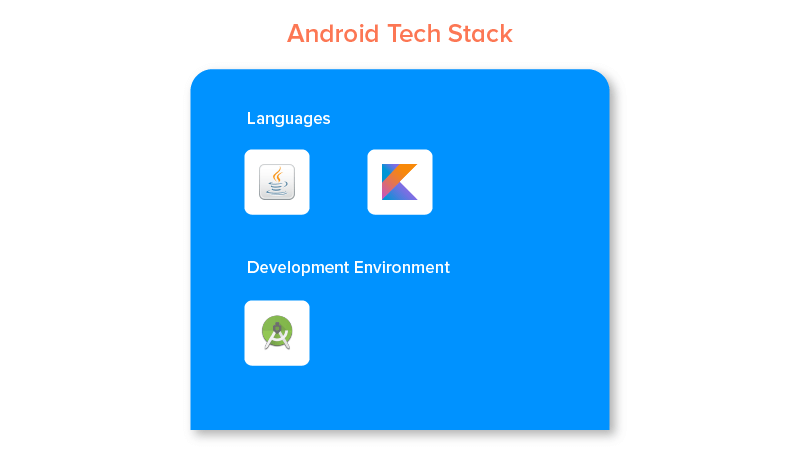 {Bonus: Java vs Python: Who is Winning the Coding Battle?}

However, Kotlin is also not lying too behind in the popularity race. With time, Kotlin has become a lot more stable option for the developers to workaround in the Android studio. The fact that the language is clean, lightweight, and much less verbose is making it a solution to all the Java problems.

The platform enables you to focus entirely on building high quality and unique apps.

With help of the Android Developer Tools, you will be able to gain complete support for the whole Android app development process. Along with that, it allows developers to use multiple on-device debugging tools, emulators, graphical UI builder, and a completely scriptable test automation support.

In order to write programs with the latest features, the developers are made to download and then install each version SDK for a specific phone.

Using this Android tech stack, developers have been able to increase the app count to over millions and have made the Android app development industry the one that businesses opt for when they are looking to reach the masses. 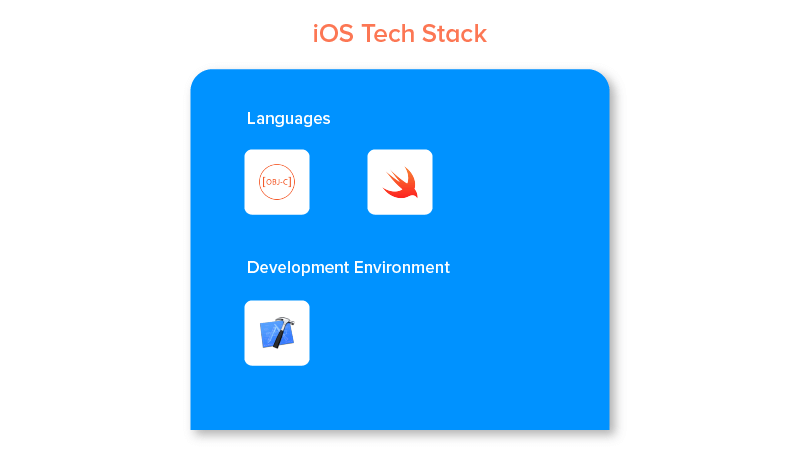 The most preferred languages that find themselves being a part of the iOS mobile app development technologies are Swift and Objective-C.

Objective-C being the superset of C language provides a dynamic runtime environment and object-oriented capabilities.

But we recommend Swift over Objective-C, simply because the language is a lot more functional and offers codes which are a lot less error-prone. It also consists of dynamic libraries which are uploaded directly to memory, cutting down the initial app size and increasing its performance.

Toolkits are the full feature environment that allows one to create both mobile and desktop apps. The ones that are most commonly used by the iPad and iPhone app developers are IntelliJ AppCode and Apple Xcode.

The iOS SDK consists of an API which acts as the link between platforms that they run on and the software application. The iPhone SDK offers tools used for Apple’s touchscreen interface and for the proprietary iOS operating system.

At the back of this technology stack, Apple app development industry has been able to brand itself as the market that businesses head out to generate revenues on their mobile apps.

While this was for Native apps, there is one app type which calls for a different set of full stack mobile development altogether. The apps we are talking about here are Hybrid Apps.

Although they are not used to a great extent anymore, there are still a small class of entrepreneurs who select them at the back of their low cost and time to market advantage. 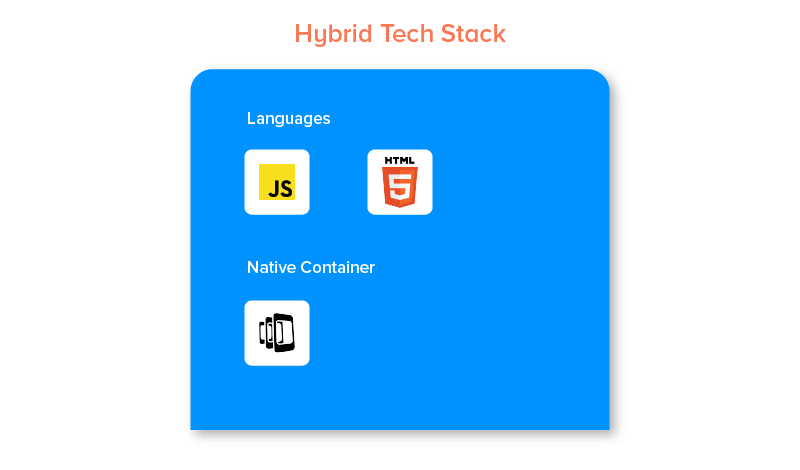 Hybrid apps are usually developed with the help of the standard web techniques like CSS, HTML5, and JavaScript. They usually consist of two sections – Backend and Native shell. These apps can run on all platforms and tend to provide access to API and acquire device storage and a camera etc.

The three frameworks that are most commonly used for the development of Hybrid apps include – Cordova, Sencha Touch 2, and Ionic.

Now that we have talked about both Native Apps and Hybrid Apps, it is time to move our focus on the Tech Stack for Cross-Platform App Development 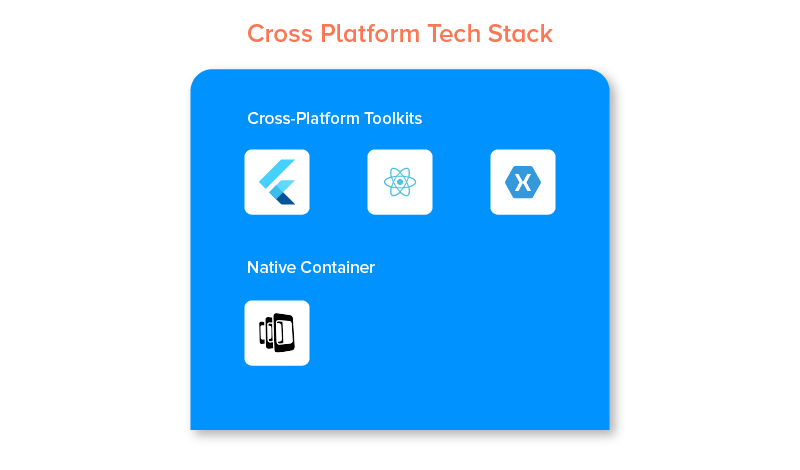 Cross-platform app development means using the same code to develop apps that would then run on multiple platforms – Android, iOS, and Web.

Businesses usually go with the cross-platform app development because of the simple fact that they are able to operate around a greater demographics. All the while taking advantage of the low development cost and faster go to market time.

A. React Native & TypeScript or JavaScript

React Native is a JavaScript framework that is used for writing mobile apps which work like native apps. When you use React Native, the application logic gets written and runs on JavaScript or TypeScript.

Xamarin allows development engineers to share 90% of codes across a series of major platforms. The tool uses C# as the main language.

Now that we have looked into the tech stack that powers the development of a variety of app types, ranging from Native apps to Cross Platforms and Hybrid Apps, it is time to look into something that matters to a mobile app development company more than knowing the tech stack: Knowing How to Choose the Best Technology Stack for Mobile Application.

How to Select the Best Tech Stack for Mobile App? 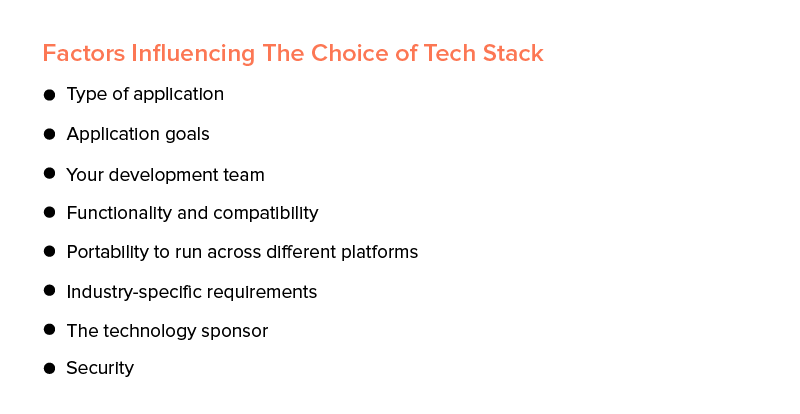 All these app elements clubbed together help decide the set of framework, library, languages, and the software that would be combined to develop the mobile

2. The Goal of Mobile App

The choice of tech stack for mobile application development also depends heavily on the goal that your mobile app is going to achieve.

There would be a stark difference in the mobile app technology stack choice when you are looking to develop a high latency app vs a quick response, low latency mobile app.

A mobile app that is dependent on heavy load processing call for a much robust tech stack than the ones that operate around streamlined interactions.

There are a number of languages and framework that tend to give the same result but have some differentiating factors that separate one from the other. Now, when you are to decide between two similar-ish tech stack, the ideal thing to do is to rely on the developer’s skill-set.

The parent company of the technology stack that you are going with also makes a lot of difference in the choice.

5. The Choice to Operate on Multiple Platforms

The technology stack of an app that runs on one platform would be a lot different than of the one that runs on all – Android, iOS, and Web.

The level of scalability that you will have to introduce in your mobile app to make it portable on other platforms, e.g. in case of Hybrid App or Cross-Platform App Development, would call for a different toolset than one that would go into the development of a Native app.

6. Security Level of the Tech Stack

Every mobile app development technology comes prepared to combat the security-related vulnerabilities that an app can come across after it is launched it is market. The problem comes when you choose a technology stack which is not sufficiently documented or which requires writing long line of codes.

And then there comes the element of developers’ skills. No matter what technology stack you are including in your mobile app, hackers will find their way in, if the app is not developed in a secure manner. So along with the tech stack, your app developers team need to be skilled as well.

7. Compatibility with the Existing Technologies

Going with a mobile app tech stack that is in line with the technology that you are using in the project is very important. Especially if you are introducing a new tech stack after the mobile app development process has started.

Apart from checking the compatibility of the tech stack with the current project, you should also check how compatible would the tech stack be with the tools that you might be planning to add in the app at a later stage.

With this, you now know everything about technology stack that you need to get started with your first mobile app development project. Now no matter which technology you end up using, make sure that they work well with your present app structure and prepares your mobile app to be innovative and scalable.

Q. What is meant by technology stack?

Technology stack is the collection of tools, languages, frameworks, and APIs, etc that come together to develop an entire software.

Q. What is app stack used for?

Mobile app technology stack is responsible for the success of the entire design, development, and maintenance process. A wrong decision on this front can lead to your app’s demise in the market much before its natural survival timeline.

Q. What technology is used to develop mobile apps?

The technologies used to develop an efficient mobile app are mainly divided into three subsets which are – Backend, Frontend, Development, and Additional.

Q. What is the best platform for mobile app development?

There can not be one answer to this question. The choice of the best platform depends on a number of different factors like the support of tech stack, design capabilities’ software, users’ demographics, etc.

Q. How to Choose the Best Technology Stack for Mobile App?

There are multiple factors that you will have to consider to establish which mobile app tech stack will best suit your need.