How Much Does Android App Development Cost?

You may come across the name “Android” or even “Google” at least once a day, if not more. This is the extent of its popularity.

What is more, Play Store statistics show that Google Play Store earned $38.6 billion in 2020. It has  witnessed a 167 percent increase in revenue over four years. This is evidence enough of the unprecedented growth of the Play Store, formerly known as the Android Market. To add to its crown, Play Store witnesses the daily app downloads of almost 250 million.

If you need more solid reasons as to why Android apps are popular among businesses and developers alike, then let’s head towards the benefits of developing Android apps.

A Vast Customer Base

You are definitely not a stranger to the popularity of the Android platform among the users. This fame is justified by the fact that the app downloads of Android for 2020 reached 109 billion. As per Statista, it is projected that consumers will download 187 billion apps from the Google Play Store by 2025. This signifies that as a business, your app can enjoy the exposure to million users and will eventually attract higher ROI. 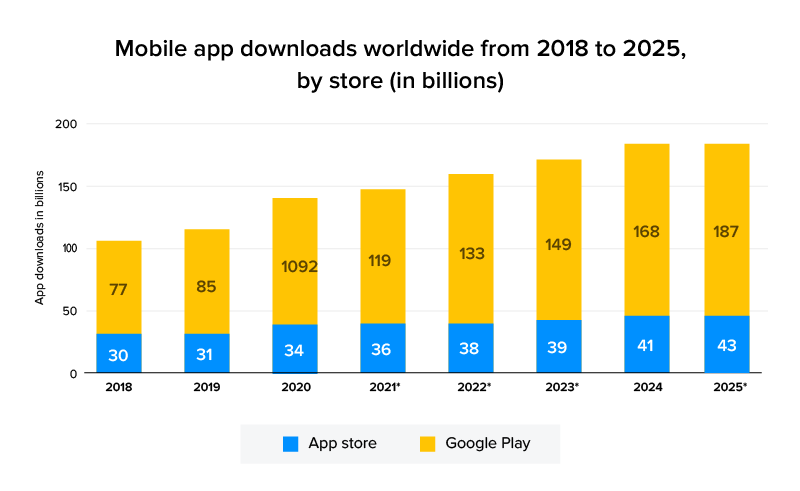 It is a well-known fact that Android in comparison to Apple is more cost-efficient, so evidently, this quality also passes down to the cost to develop apps like Wayfair Android apps are cost-effective as there is only a one-time fee of $25 at the time of registration. After registration, developers can build and test the app on their devices, which lowers costs. In the case of Apple, the cost lies close to $99 a year. In addition, Android is open source. Android app developers do not have to concern themselves with licensing costs or royalty while using the software development kit (SDK). What’s  more, there is a wide range of tools and Android libraries available for app development, which further makes the whole development process less costly.  Also, the cost effectiveness depends on the region. The cost of Android app development company in USA differs from that of app development in other countries and regions. This may be due to several factors such as cost of labour, level of app complexity, maintenance cost of app and size of development team.

The android platform grants inner app integration along with effective customization matching the requirements of the business by providing appropriate tools. These apps are easy to integrate with third-party APIs which helps in reducing the development time.

Another benefit of developing Android apps is that they are compatible with a myriad of devices available in the market. Because Android rules the market, there is a huge fraction of manufacturers (Samsung, One Plus, etc) developing devices for the Android platform. One of the core reasons behind this is the affordability of Android-powered devices in comparison to that of Apple.

Android applications are highly customizable because Play Store guidelines give a lot of room for innovation.  The versatile apps can be integrated into the existing systems as add-on to increase the functionality and can be implemented as the stand-alone tool for streamlining the processes. Your application should reflect your business vision, and this precisely can be achieved with android mobile app development. Android renders high scalability as well which is a crucial point for any startup or even a fully-grown business as well.

It is really important that your mobile application is well protected and there is no possibility of security issues. Application development related to Android is based on Linux,  which guarantees security and trouble-free operation of any mobile app on Google MarketPlace. It also offers additional inbuilt features for protection against viruses and malware.

Now, if you are really impressed with the Android platform you would want more information before choosing it for your mobile app development needs. So naturally, the next thing you will think about is the inevitable question of  “How much does it cost to develop an app?”

To effectively calculate the cost of application development, a formula has been curated. It involves the amount of time (in hours) taken in the app development process, which is then multiplied with the billable hours of the resources spent in the whole development process.

Factors Contributing to the Cost to Develop Android App

This is the initial and also a crucial stage that will help determine how much does app development costs. App Discovery is the process of justifying and validating the app idea. There are several ways and methods used by the Android application builders to complete this task, and one of them is Design Sprint. This process can last upto 5 days, if not more.

Let’s have a look at the methods employed in the App Discovery process leading up to the final cost of Android app development.

In short, the whole process of App Discovery is wrapped around the features and attributes any Android application must have to outshine its contenders.

Moving forward in the process of developing an Android app, this stage consists of all the solid decisions that are made about the application such as the important features to include in the app, its functionalities, choosing the right tech-stack, etc.

Level of app complexity also determines how much does it cost to build an app. One of the qualities which contribute to an application being considered as “Efficient” and incredible is the diversity of the features it has. So, let’s have a look at some prominent features that add up to the Android app cost estimation. 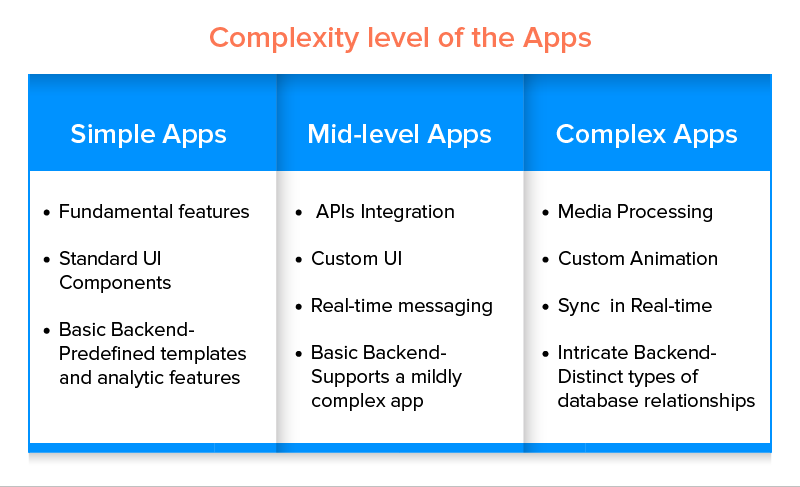 Type and Category of App

It is a given that the cost of app development relies on what type of Android app is being developed. There are various categories we can divide the Android applications in and they all come with their own functionalities, demographics, security criteria, and more.

The animation and design of any Android app are again additional crucial factors affecting app development costs. There are various designs and animations out there, and the costs for implementing them can vary depending on the type and quality of these designs.

Everything leads up to this prominent point. Successfully submitting an app on the Play Store plays an integral part in the successful completion of the development process. However, there are certain prerequisites that must be considered. To get any app selected, there are some Play Store guidelines that need to be followed.

Additionally, there is a one-time fee of $25 that Google charges for publishing applications.

The process for app development does not end with the application successfully getting published on the Play Store, there is much more ahead to do, i.e., App maintenance. However necessary this step is, the maintenance cost of Android apps’ frontend and backend eventually adds up to the final amount of total cost.

If you choose a startup development company or even a group of freelance Android app developers, the cost of the developed app will amount to be low. The reason behind it is they will entirely focus on enhancing their portfolio and monetary gains will come second in the priority list.

Opposed to this, an app development company in California with a bigger team size will focus on clients who can pay more as it has a lot of mouths to feed. However, the quality of the end product will definitely be worth it and will be superior to that of freelance developers. It is because an organization has access to the latest tech-stack and professionals who work diligently in making the applications the best it can be.

However, there are some remarkable Android development companies delivering impeccable mobility solutions at a low application making cost, posing as a perfect fit for startups.

This is how a team size flow of large capital Android development organizations looks like. 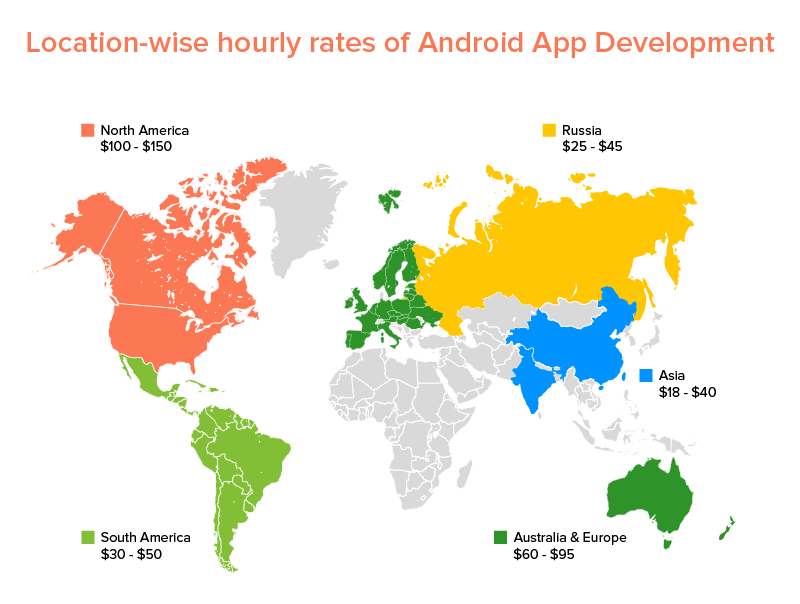 The change is inevitable to notice between the west and the east, as shown in the map below. Speaking of which, it is noticed that the Android development cost in India is way less if compared to the USA or any other western country. This is due to several reasons such as the abundant availability of technologically skilled human capital and lower prices of services.

Now that we know what factors determine how much does it cost to build an app, let’s do a comparison of Android vs iOS app development costs.

A Comparison of Android vs iOS App Development Cost

Well, the cost of app development depends on how long it took to build a mobile app and also the technology used in the process. Now, Android apps are developed using the Java programming language, whereas iOS applications are based on Swift and Objective-C. It is observed that the developers of the latter languages can charge from 10% to 15% more in comparison to Java developers. This shows that Android apps are less costly than iOS in this regard.

The difference between the time spent on developing engaging and intuitive UI Design for both Android and iOS apps is minimal. What is more, there is a lot of room for experimentation and innovation in Android application development due to the flexible guidelines of Google.

When it comes to the testing of Android apps, it can be a challenging task for the developers. As opposed to the iOS app development, an Android application needs to be tested across numerous screen displays and resolutions to get more unified and better user experience.

Due to the strict Apple Guidelines, it becomes arduous for developers to get the application cleared. Whereas Google does not have restricted entry. However, the updated Google policy may suggest some strictness in the process of app selection. This publishing criteria that both Apple and Google demands adds on to the cost to build an app.

After witnessing all the factors majorly contributing to the final Android app development charges, we can see that it is not possible to have a one-word answer to the question “How much does it cost to develop an app?’’. However, these factors are sufficient to some extent in explaining how the Android development cost is determined.

Here are some ways in which you can cut down on your Android app development charges:

Q. How much does it cost to  publish an Android app on the Play Store?

Google charges a one-time fee of $25 to publish an app on the Play Store.

Q. What is the average cost to develop an app?

Q. What is the average time to develop an app?

If you are planning to build an app, it can take from half a year to upward of a year to be completed.

Q. Should I patent my Android app?

It depends. If your application is one that is truly unique – targets a complete new group of users, use a never used before technology – you can think of patenting your Android app. But, to be double sure, you can refer to the USPTO website or Google patents for inquiring purposes.

Q. How to estimate the development cost of an Android app?

There is a simple formula that is used to calculate the average cost of app development – Hours spent in development multiplied by the billable hours of resources spent.

Q. Why should startups go with Android Application Development?

We could present a plethora of benefits that app development for Android offers to startups. Some of the major points from the benefits are:

You can make your own app, but it’s advisable to work with an experienced app development company, so you can save money in the process while getting a better end result.