What Do We Mean by App Architecture?

In layman’s terms: Mobile application architecture is a set of techniques and model/design that are supposed to be followed for building a structured mobile app. It can also be denoted as an app’s skeleton upon which the working and quality is based.

So, everything that defines an app – how the data would move, the UI/UX, the choice of platform, the tech stack, etc. is a part of Mobile app architecture patterns.

What happens when Mobile App Infrastructure is not paid its fair share of attention?

Selecting the right architecture must be a default primary step in the planning and designing phase of a software development project. However, most often than not, the stage is ignored simply on the grounds of making the development process slower and thus more extensive. While ironically, the lack of it is a major reason behind a mobile application failure.

The lack of an enterprise application architecture, though, introduces a number of issues in the software:

The glaring issues attached with the lack of an architecture or of it being deemed unimportant gives birth to the need to build a mobile application architecture that is right and accounts to all the necessary considerations. 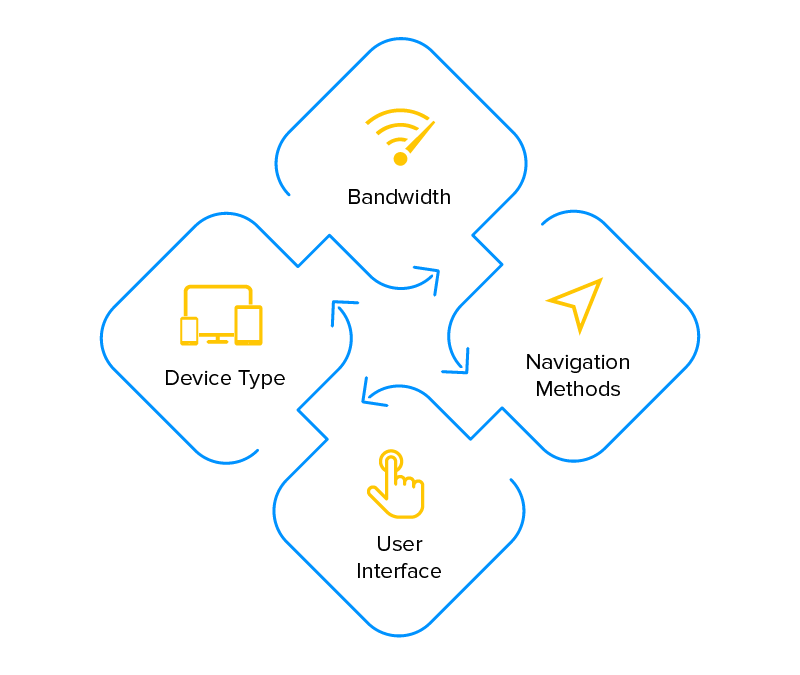 At this stage, you will have to keep the device type into consideration. This would need you to study the screen size, resolution, CPU characteristics, memory, and storage space, plus the availability of the development tool environment.

The app features would have dependency on the software or hardware, which is why it is important to have the details of devices on which the app would run.

Throughout its lifecycle, your application will face several events where the internet connectivity will either be dwindling or there would be none at all. Your app architecture will have to be built noting the worst network conditions. You will have to design the data access mechanism, caching, and state management according to the worst case scenarios.

The importance of UI/UX within an application is unquestionable. Ensuring that your UI is devised to keep users engaged and give them an uncluttered experience is an important part of your mobile app infrastructure – One that would define how well it is designed.

While majorly accounted for the app architecture designing front, the element would call for an expertise in both backend and frontend. On the basis of your understanding of who the customers are and what are their app requirements, you should analyze which one of these would be good for your app:

Knowing the elements will only take you halfway when dissecting what is mobile app architecture to its entirety. 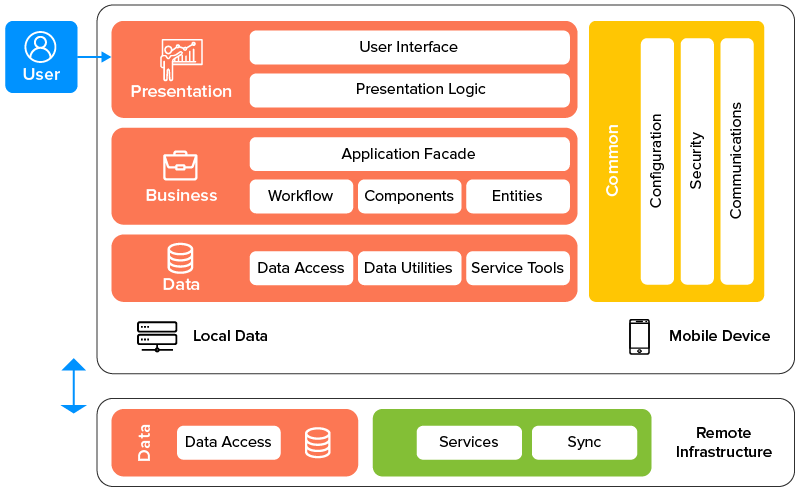 The aim of this layer is to look into how to present the application to end users. When designing this layer, the mobile app developers must identify the correct client type for intended infrastructure. Additionally, the client’s deployment restrictions must also be kept in mind. Another necessity is selecting the correct data format and using robust data validation mechanisms for protecting the apps from invalid entry.

This layer looks into elements on the business front. In layman words, it looks into the way businesses are presented to the end users. This consists of business components, workflow, and the entities under two sub-layer hood: Domain model and Service.

The data access layer must meet the application requirements and should help in offering efficient and secure data transactions. Mobile app developers should also consider the maintenance side of the data while ensuring that the data layer can be modified easily with the changing business requirements.

This layer consists of the data specific components such as access components, utilities, helpers, and the service agents.

The three elements are placed under two subheads: Persistence Layer and Network Layer. The former offers simplified data access which is stored in the backend, the latter is needed for making networking calls.

The intent of everything you have read till now is to not just understand what is mobile app architecture but ‘What is a Good Mobile App Architecture’. Now, what makes an architecture a good architecture is the principle set it is based on.

Question: What are the foundations of a good mobile app architecture?

Meeting all these different conditions enables you to speed up the development process while making maintenance much easier. Additionally, a well devised architecture in addition to platform centric technology is best used for solving complicated business issues in an effective manner for app projects.

Establishing an architecture as good is an event that calls for it to follow different principles. These principles also hold the answer to how to choose the right architecture for your mobile app.

It is the system’s ability to react to the changing environment. In the case of mobile apps, the environment changes maybe a lot more frequent noting the market and technological changes. A good mobile app architecture ensures that the system is portable enough to answer to the changes keeping the impact of those changes at the minimum.

Noting the requirement changes happening due to the environment changes should be modified to correct the faults, better the performance, etc. In such a scenario, there is always a need for constant app maintenance. A good mobile architecture and programming must ensure high maintainability while reducing the efforts needed to keep the system up and running.

Data security is the most major non-functional need of an application. The architecture must be robust enough for securing the data which is consumed by the app. It should also be in sync with the organization’s security ecosystem, while all the data which is stored on device must be properly encrypted.

Users expect applications to be quick and issues free. If the app takes a lot of time to fetch the details, the probability of users abandoning the application increases by manifold. A good mobile app architecture should be such that every single one of the users’ expectations are met to its entirety.

This is the stage which would set the basis of your deep diving further into the types of app architecture and having a conversation with the engineering team.

Sudeep Srivastav
CEO, Appinventiv
Let's connect!
In search for strategic sessions?.
Let us understand your business thoroughly and help you
strategies your digital product..
Book a session →
You have a vision. We have a way to get you there.
Global Leader in new age digital product development
Speak to our experts