Native vs Hybrid: The Better Choice for App Development

Apps are more than just technology. Apps have become a part of life and people are spending the majority of their days on apps now. Not to confuse these apps with game apps since non-gaming apps have seen a sudden rise in the market.

Now tell us, can your business afford to lose such a huge market? Absolutely not! Going mobile has so many advantages and opens up multiple doors of opportunities for businesses. Apps are great for creating awareness and providing more value to your customers. This is why most businesses are opting for a mobile app solution.

Those who are going for app development for business must be knowing that there are many choices and decisions to make. During the entire app development process, there are a lot of choices that the app owner and the app developer make in order to get the best possible outcome.

One of these decisions is a choice between native and hybrid apps. The debate of native vs hybrid app has been going on for a while and honestly, there is no black and white answer to it.

So, let us start by understanding what is native app and hybrid app in simple terms.

Native apps are particularly built for one platform. These apps are based on programming languages that support one platform at a time. The languages are Java or Kotlin for Android app development and Swift or Objective-C for iOS app development. These apps cannot be run on other platforms since they are developed for a specific platform. For instance, an app built for iOS platform cannot run on the Android devices and vice versa. However, this does have a benefit. Since the apps are built for one specific platform i.e. iOS or Android or Windows, the apps can use the full functionality of the devices. This means a smooth running app with lesser errors.

A hybrid mobile app is based on the web view which runs on a web application in a native browser. These are viewed in UIWebView for iOS and WebView in Android. These apps are developed using hybrid app development languages like CSS, HTML, JavaScript and then Cordova is used for wrapping them into native apps.

When compared, hybrid technology vs native technology, one is rich in performance and the other has a higher reach in the market. Despite the differences, both types of apps use languages that are considered to be the top programming languages. These apps have benefits as well as limitations which we will discuss in the upcoming segment of the blog.

Now that you are clear with what are native apps and hybrid apps, let’s see their pros and cons. Both the apps are good for different reasons but not for the same reasons. Each has its own pros and cons which will determine whether you should go for a hybrid mobile app or a native mobile app.

So these were the native vs hybrid apps pros and cons. We can clearly see that both have a reasonable number of pros and cons. Web apps or hybrid apps lack high performance whereas native apps require constant updates from the users’ side. For proper comparison, we shall move to the next segment which is the difference between native and hybrid mobile apps.

What is the Difference Between Native App and Hybrid App?

The first difference is the one that we have been talking about since the beginning of this blog, i.e. the platforms. The native apps are built for one platform whereas the hybrid apps can be run on multiple platforms.

This brings us to the second difference between hybrid app and native app. The programming language used in both apps is different since there is a difference in supporting the platform. Hybrid apps are developed using CSS, HTML and JavaScript whereas Native apps are built using Java for Android and Swift for iOS.

The third difference between native app and hybrid app framework is the developer. When going for native app development platform then there is a need for an expert app developer. Since the app is focused on one platform, the importance of UI/UX design in the app is very high. Customers tend to leave the app if they are not satisfied with the UI of the app. On the other hand, hybrid apps are easy to build and take less time. They do not require an expert for the development process.

In the native vs hybrid mobile app development, the fourth difference is performance that is a major difference. Native apps are smooth and provide better user experience than hybrid apps. For a better understanding of these differences, here is a comparison between hybrid vs native app performance. 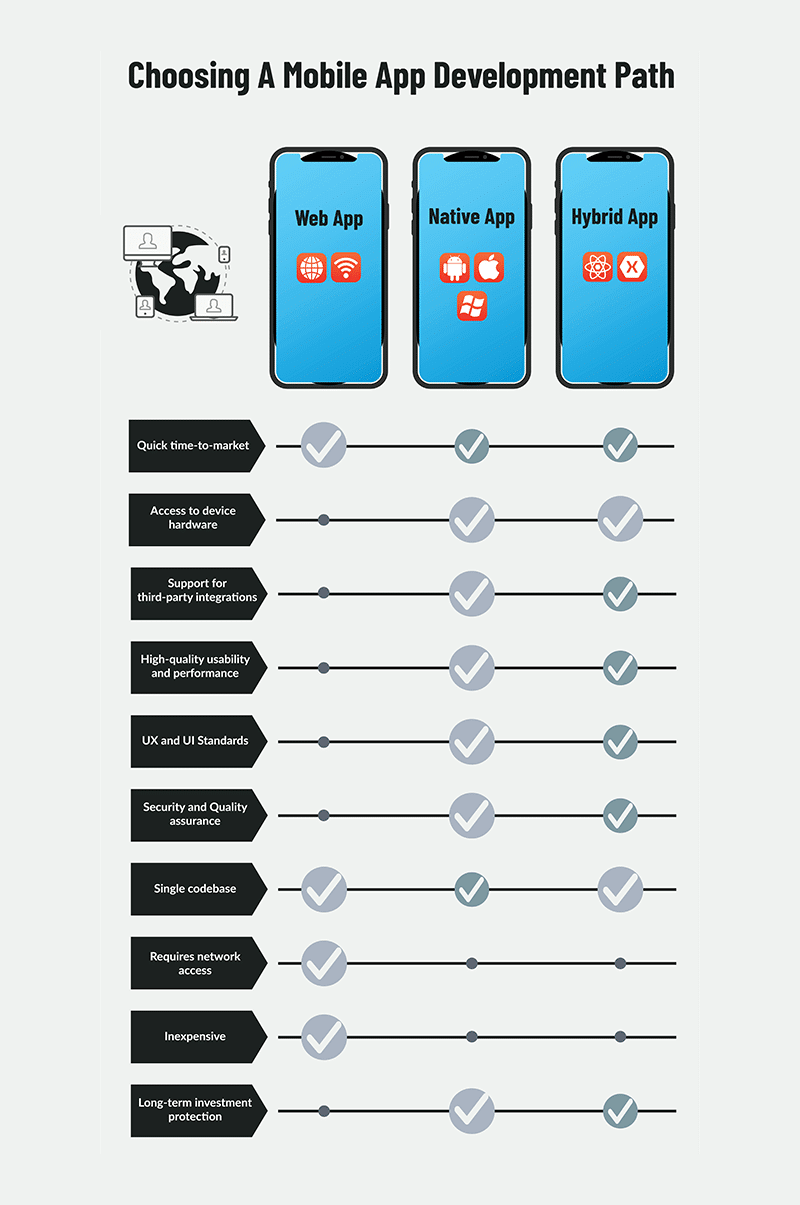 The fifth difference is the user experience, which is the key to an app’s success. As you know, native apps are designed for a particular operating system. Thus when an organization builds a new app, the user experience for that OS turns out to be of critical importance. But when it comes to launching a hybrid application, then there is no need to maintain two different code bases. That makes hybrid apps easy to build, less time taking for the market, and need only one code base.

All these differences help a business decide whether they can use the advantages of a native app or a hybrid app. However, we cannot ignore the fact that both the app development choices have seen some successful apps. Some of the successful Native apps are Twitter, PayPal, LinkedIn, Google Maps, Telegram, PokemonGo, etc. Instagram, Yelp, Baskin Robbin, Basecamp, etc, are examples of Hybrid apps.

If even after this long comparison you haven’t figured out a side in native app vs hybrid app, then the next segment is for you.

Native vs Hybrid App Development: When to Choose Which? 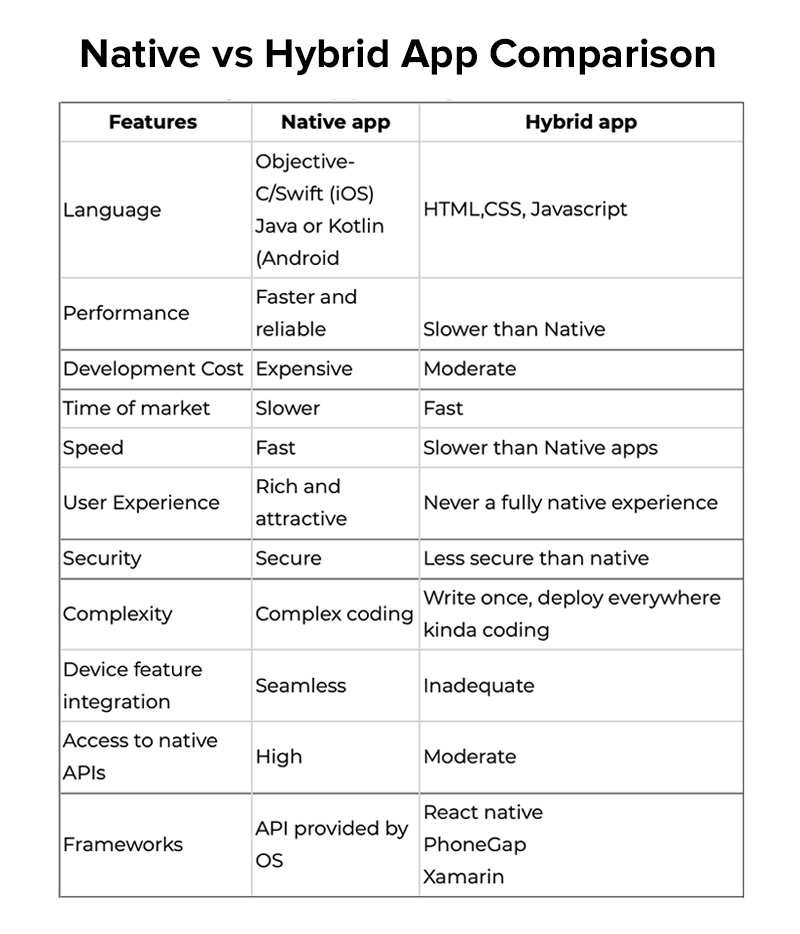 After seeing the pros and cons of native and hybrid mobile applications and the difference between native and hybrid app, we can say each has a set of benefit that the other can’t replace. The hybrid app performance when compared to a native app is poor and lacks interaction. This is a strong point for anyone thinking of owning an app.

Before deciding between native app vs hybrid app, there are some factors that must be considered:

Let us see point by point when to choose which option between native vs hybrid mobile app development.

What Is The Best Choice For Mobile App Development?

For mobile application development, the best option lies within the goals and priorities of your business.

If a business wishes to run its mobile application across different platforms, similar to Android, Apple, Windows, and so forth, it can select a web or hybrid application, since it helps to save time. By developing a web or hybrid application, the business needs to make the application only once, since it includes a single code base, and afterward publish its application across several platforms. Also native apps need particular programming for every platform, for example, JavaScript for Android and Objective C for Android.

Based on User Experience

Which Is Better Native Or Hybrid App?

As we have read above, native and hybrid applications have their own advantages and disadvantages. Settling on what sort of application to pick relies on the demand of the organization and the end-user. Thus, it is better to talk about this with an expert mobile app development services developer. They would comprehend your necessities and offer shape to your thoughts in the most ideal way.

To conclude with, native apps are built with strong features and technical advancements whereas hybrid apps are cost-effective and less time-consuming. If you wish to know more about native and hybrid app differences or how to build hybrid apps or native apps, contact our mobile app development company USA team at Appinventiv.