Assuming that you’ve heard the word ‘API’ for like zillion times while communicating with mobile app developers, today I’m going to cover everything about APIs in this article. So, put your seat belts and get ready to get into the world of APIs – the superheroes behind the functioning of the mobile apps.

Let’s begin with what are APIs?

API(Application Programming Interface) is a set of instructions, standards or requirements that enables a software or app employ features/services of another app, platform or device for better services. In short, it’s something that let apps communicate with each other.

For example, when we hit on the ‘Connect Facebook’ button on Candy Crush, it does not ask us to enter our Facebook account details. Rather, it accesses the data from the Facebook server and let us enjoy playing – all thanks to API.

An API is the base of all the apps that deal with data or enable communication between two products or services. It empowers a mobile application or platform to share its data with other apps/platforms and ease the user experience without involving the developers. On the top of it, APIs eliminate the need to build a similar program or platform from scratch; you can use the existing one of some other app/platform. Because of these factors, both app developers and business leaders focus on API development.

If you are also interested in API development or wish to gain a sound knowledge of the same, keep reading 🙂

Before we delve further, let’s just have a look at the basic terminologies that will make it easier to understand the concept.

a) API Key: When an API request through a header or parameter to recognize the requester, the authorized code passed into the request is said to be an API Key.

b) Endpoint: When an API interacts with another system, one end of the communication channel is termed as Endpoint.

c) JSON: JavaScript Object Notion or JSON is said to be a data format used for APIs request parameters and response body.

d) GET: The RESTful API’s HTTP method of obtaining resources is called GET.

e) POST: It is the RESTful API’s HTTP method for building resources.

f) OAuth: It is basically an Open standard authorization framework that renders access from the user’s side without directly sharing the credentials.

g) REST: REST (Representational State Transfer) is a kind of programming architectural implementation meant to enhance the efficiency of communication between the two devices/systems. It is light-weighted and based on the idea of making a particular data available only when requested by sharing references to the data instead of the entire copy of the data itself. The systems enforced on this architecture are said to be ‘RESTful’ systems, and the most overwhelming example of RESTful systems is the World Wide Web.

h) SOAP: SOAP or Simple Object Access Protocol is a messaging protocol for sharing structured information in the execution of web services in computer networks. It works with XML information set and application layer protocols (like HTTP and SMTP) for message format and message negotiation & transmission, respectively.

i) Latency: Latency is defined as the total time taken by an API in the process from the request to the response.

j) Rate-Limiting: The term API Rate-limiting refers to the process of defining the rate at which an end user can access the APIs. In other words, it means restricting the number of requests a user can hit to an API per time.

k) API Throttling: The process of regulating the usage of APIs by users during a particular time period is called Throttling. This can be used for API limiting. For example, you set the limit of 1000 API requests per day. When the user hit the 1001 request, the server will send 429 messages as HTTP status to the end user along with the message, “Too many Requests”.

For more terminology and acronym, refer this site.

Now, as you know what are APIs, are armed with the terminologies and are familiar with the anatomy of the growing API market, let’s dig deeper into the technical part – beginning with how do APIs work?

Suppose you opened some XYZ app/website to book a flight. You filled the form – you entered the departure and return date, city, flight, and other relevant details – and submitted. With a fraction of seconds, a list of flights appears on the screen along with the price, timings, seat availability, and other details. How this actually happens?

{Also learn: How APIs are used in Fintech and banking?}

To provide such stringent data, the platform sent a request to the airline’s website to access their database and get relevant data via API. The website responded with the data which API delivered to the platform and the platform displayed it on the screen. 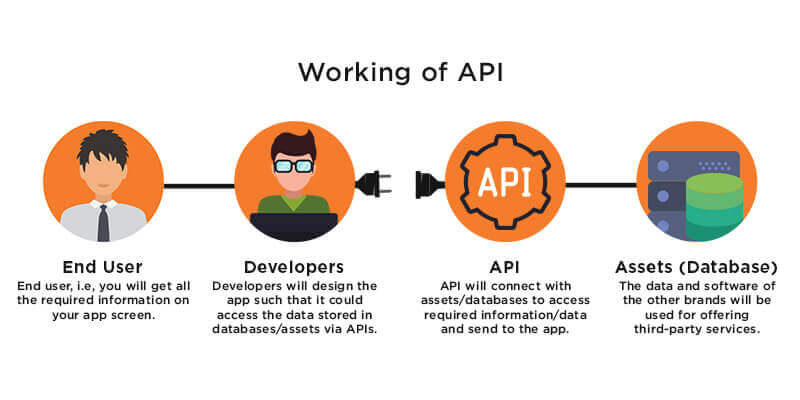 Here, the flight booking app/platform and airline’s website act as endpoints while API as the intermediate streamlining the data sharing process. When talking about communicating the endpoints, the API works in two ways, namely: REST and SOAP (see definition above).

Though both the methods bring effective results, mobile app development companies prefer REST over SOAP since SOAP APIs are heavy and platform-dependent.

To understand the API lifecycle and working process in detail, contact our experts today!

Now coming to the main part – How to develop an API? What tools and technologies to choose? What practices to adopt for an effective API development?

While there are a plethora of tools and technologies equipped into the process of creating an API, the popular tools and products for developing APIs for developers are:

a) Apigee: It is a Google’s API management provider that assists the developers and entrepreneurs to triumph at digital transformation by reestablishing towards an API approach.

b) APIMatic and API Transformer: They offer sophisticated automatic generation tools to build top-quality SDKs and code snippets from API specific formats and transform them into other specification formations, such as RAML, API Blueprint, etc.

c) API Science: This tool is primarily used for evaluating the performance of both internal APIs and external APIs.

e) API-Platform: This is one of the open-source PHP framework that is apt for web API development.

f) Auth0: It is an identity management solution used to authenticate and authorize APIs.

g) ClearBlade: It is an API management provider for embracing the IoT technology into your process.

h) GitHub: This open-source git repository hosting service let the developers manage code files, pull requests, version control, and commenting that are distributed across the group. It also let them save their code in private repositories.

i) Postman: It is basically an API toolchain that empowers the developers to run, test, document, and evaluate the performance of their API.

Although the world is full of APIs and APIs, there is still a major gap in utilizing the perks of API. While some APIs make integration to the app a breeze, other turns it into a nightmare. To help you out in ensuring that you build a former one, here are some of the factors related to APIs for developers to consider:

5. Must-Have Features of an Efficient API 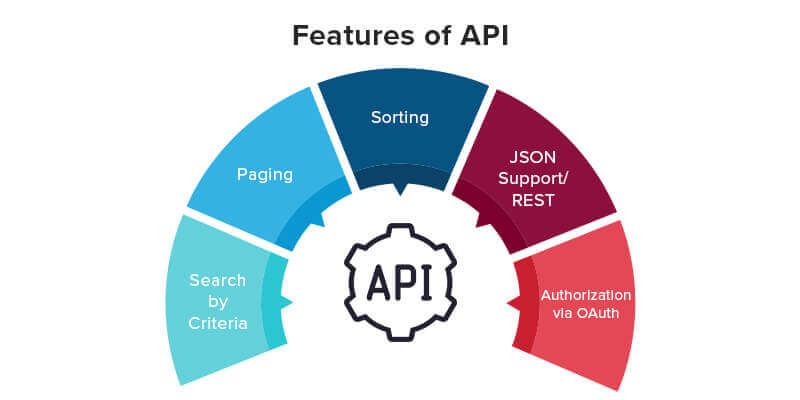 a) Modification timestamps/Search by criteria: An API should let the users search data based on different criteria, like a date. This is because it’s the changes (update, edit and delete) that we consider just after the first initial data synchronization.

b) Paging: Many times, it happens that we do not want to see the complete data changed, but just a glimpse of it. In such a scenario, the API should be capable of determining how much data to display in one go and at what frequency. It should also inform the end user about the no. of pages of data remaining.

c) Sorting: To ensure that the end user receives all the pages of data one-by-one, the API should empower the users to sort data as per the time of modification or some other condition.

d) JSON Support/ REST: Though not compulsory, it is good to consider your API to be RESTful (or providing JSON support(REST)) for an effective API development. The REST APIs are stateless, light-weighted and let you retry the upload mobile app process if it fails. This is quite tough in case of SOAP. Besides, JSON’s syntax resembles that of most of the programming languages, which make it easy for a mobile app developer to parse it into any other language.

e) Authorization via OAuth: It is again necessary that your API authorizes via OAuth since it is faster than other methods – you just need to click on a button and it’s done.

In short, the processing time should be minimum, response time good and security level high. It is of paramount importance to put efforts into the best practices for securing your application, after all, it deals with a heap of data. 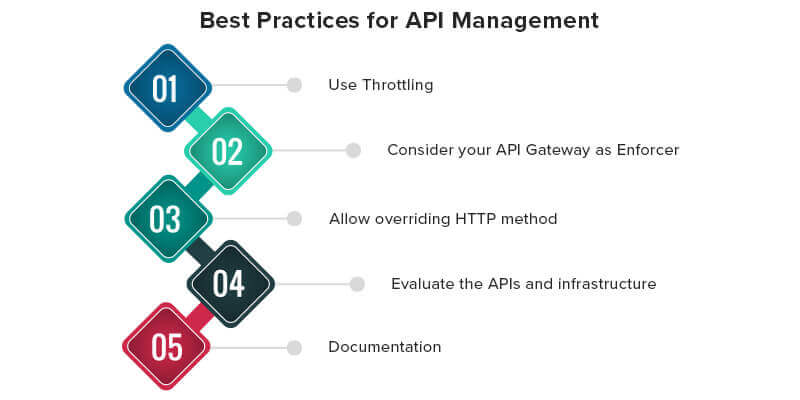 a) Use Throttling: App Throttling is a great practice to consider for redirecting overflow of traffic, backup APIs and safeguarding it from DoS (Denial of Service) attacks.

b) Consider your API gateway as Enforcer: While setting up throttling rules, application of API keys or OAuth, the API gateway must be considered as the enforcement point. It should be taken as a cop that lets only right users get access to the data. It should empower you to encrypt the message or edit confidential information, and thereby, analyze and manage how your API is being used.

c) Allow overriding HTTP method: Since some proxies only support GET and POST methods, you need to let your RESTful API override the HTTP method. For doing so, employ the custom HTTP Header X-HTTP-Method-Override.

d) Evaluate the APIs and infrastructure: In the current time, real-time analysis is possible to get, but what if API server is suspected to have memory leaks, draining CPU or other such issues? To consider such situations, you can’t keep a developer at duty. However, you can perform this easily via using numerous tools available in the market, like AWS cloudwatch.

e) Documentation: Last but not the least, it is profitable to create an extensive documentation for an API that let other mobile app developers easily understand the whole process and utilize the information for offering better user experience. In other words, a good API documentation in the process of effective API development will lessen the project implementation time, project cost and boost the API efficiency.

Now as you have gained an in-depth knowledge of what are APIs and what factors to consider while developing one, are you interested in API development? If so, reach to our experts.

REST (Representational State Transfer) API is a software architectural style that describes a complete set of constraints to be employed for building Web services.  Whereas, SOAP (Simple Object Access Protocol) is a protocol much complex by adding more standards than REST, such as security

Making a good RESTful API is easier when you follow these practices:-

API (Application Programming Interface) is a collection of instructions, and requirements that let a software or mobile application utilize the features/services of other applications, platform or devices for exceptional services.

There are basically different types of API:-

JSON (JavaScript Object Notation) is an encoding scheme created to eradicate the need for an ad-hoc code for each app to interact with servers in a particular manner.