Kotlin Vs Flutter: Who Will Rule the Cross-platform App Market?

There was a time when cross platform development was considered a synonym for building an app using React Native and Flutter. The business enthusiasts and mobile app development companies were relying upon these two frameworks to make their presence on both Android and iOS in a cost-effective manner.

But now, Kotlin has also entered the competition; making everyone wonder who will be the ultimate ruler of the cross platform app market. Now, while we have already looked into the Flutter and React Native comparison earlier, here, in this article, we will talk descriptively about the Kotlin vs Flutter comparison and help you find the right option for your cross platform app development needs.

[While we’ll be discussing the cross-platform functionality of Kotlin here, you can learn about how Swift can be used for developing Android apps in this blog.]

But let’s learn the ropes of both first.

1.   What is Kotlin Multiplatform?

2.  What is Flutter UI Framework?

3.  Factors to Consider for Comparing Kotlin Multiplatform and Flutter

4.  Who’s the winner of the Cross-platform development battle?

What is Kotlin Multiplatform?

Kotlin multiplatform, is an additional feature of the language that helps it expand beyond android app development. Meaning, it enables developers to share codes, data, and business logic across multiple platforms such as iOS, Web, Linux, MacOS, Android, and Java Virtual Machine (JVM). 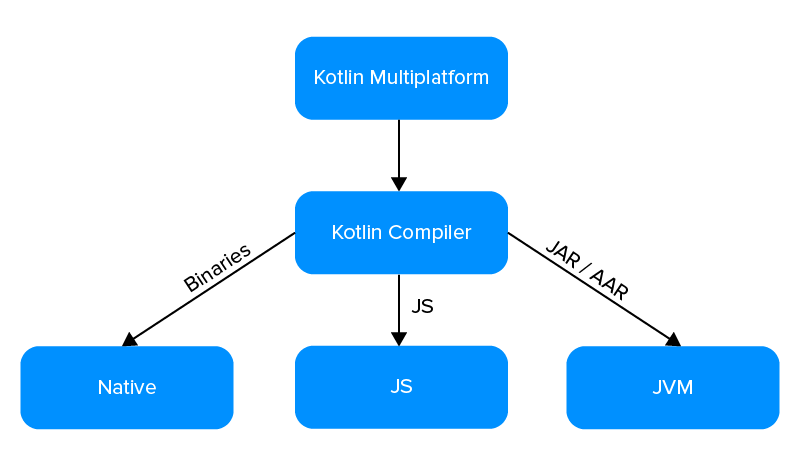 [While we’ll be focusing on the multiplatform functionality here, you can get acquainted with Kotlin’s native platform characteristics in this blog:- Kotlin for Android App Development – The Whys and Hows and Bonus Tips ]

The concept of investing in Kotlin development for cross-platform presence is still new in the market, but it is surprisingly embraced by various popular brands.

And the prime reason behind this is the following set of benefits it avail to the mobile app developers.

Pros of Going with Kotlin Multiplatform

The biggest benefit of opting for Kotlin is that you won’t have to  shift the complete application. You can begin with a single module or feature, determine its working, and then progressively migrate other parts.

Since Kotlin has a syntax quite similar to other top programming languages like Swift, Java, Groovy, and Scala, it is quite easy to learn the language and invest in Kotlin multi platform development.

It’s true that it is not the first tool that enables one to separate business logic and UI. Various cross platform frameworks like Xamarin and React Native have been offering this service.

However, the fact that makes it different from others is that it employs shared logic and libraries below the UI layer. This makes mobile application developers interact with the native environment – Swift and XCode for iOS, JavaScript for web, and Kotlin and Android Studio for Android -without using any bridge and deliver codes in a more native way.

Kotlin Multiplatform does not demand developers to follow any instruction for UI creation. It enables UI app developers to work on the appearance, behavior, and performance of the application just like they would in case of native.

One of the advantages of considering Kotlin language for cross platform mobile app development is that multiplatform compiles code to the explicit same format as the targeted platform. This makes it as good at performance as its native counterparts.

It lets developers scale up their app project and operate without using any VM. This makes it a perfect choice for crafting a mobile app while focusing on flexibility and scalability factors.

However, despite such impressive advantages, the multiplatform extension of Kotlin language is still struggling to become the favorite of all because of certain disadvantages.

Though introduced in Kotlin 1.2, the SDK has not yet reached a stable 1.0 version. It is still in an experimental state; making developers hesitant in picking it for their next big project.

Currently, only a few basic libraries like data serialization libraries and HTTP client libraries are available in the development environment. Although, many more libraries like DateTime library are expected to enter the market with the advent of Kotlin 1.4, the successor of Kotlin 1.3.60, it is tough to build applications seamlessly and effortlessly till date.

3.  Need Familiarity with Other Tech Stack

Since Kotlin multiplatform is not designed to be a replacement for every application programming interface (API) that a platform focuses on, it is required for app development companies to have basic knowledge of each platform and API. This is again a drawback of picking Kotlin over Flutter and other cross-platform development options.

Last but not least, the Kotlin SDK provides several semi-native functionalities. Because of this, it demands higher cost to build mobile apps, which eventually makes it not a good fit for creating MVPs and app prototypes.

With this covered, let’s take a recap of Flutter before diving deeper into the market to know the Flutter and Kotlin multiplatform relationship.

What is Flutter UI Framework?

Introduced back in 2015 with an intent to prepare a market for Google Fuchsia, Flutter is an open-source SDK that enables one to craft beautiful, native-looking mobile, web, and desktop using a single codebase.

Google Flutter targeted numerous prevailing technological and market challenges and provided effective solutions. A result of which is that Flutter became an ideal cross-platform app development framework in no-time. Not only this, it entered into the list of technologies that top brands work with.

This made everyone more curious to know what are the features of Google UI framework  Flutter and the respective advantages, a glimpse of which you can get from the next section.

Both Flutter and the underlying programming language, Dart are open-source and free to use. This empowers developers to view the documentation, post their queries in the open developer forum, and eventually, learn and implement the code.

One of the biggest reasons why Google Flutter is preferred by mobile application development agencies is its hot reloading functionality.

The functionality makes it easier for anyone to make any change at the backend and view the difference at the front-end simultaneously. And this way, easily decide whether the change looks perfect with other elements of the application or not.

By investing in flutter app development, developers get an opportunity to use different widgets in the development environment. This makes it easier for them to create mobility solutions that are faster and have customized look & feel.

One of the prime benefits of focusing on Flutter development is that it renders opportunities to create native-like apps for both iOS and Android using a single codebase. Something that makes the cost to create a Flutter mobile app considerably low.

With the facility of Firebase integration, Flutter enables developers to add backend facility into the development environment.

Flutter offers the functionality of building an application for both Android and iOS platforms in less time, cost, and effort. This makes Flutter a perfect option for MVP development and creating prototypes that can be used to test the water or raise fundings.

The foremost drawback of selecting Flutter for your application development plan is that the app size is too big. Compared to React Native and Xamarin, even the release file size of ‘Hello World’ app in this framework is around 6.7MB.

There’s no denying the fact that Dart is easy to learn and faster to implement. However, it is not yet as popular as its peers – Java, C#, JavaScript, and C. This prevents developers from enrolling the best dart programming courses and land into the Flutter industry.

Now, as we have touched base on both, let’s see which is better for cross platform mobile development – Kotlin or Flutter.

Factors to Consider for Comparing Kotlin Multiplatform and Flutter 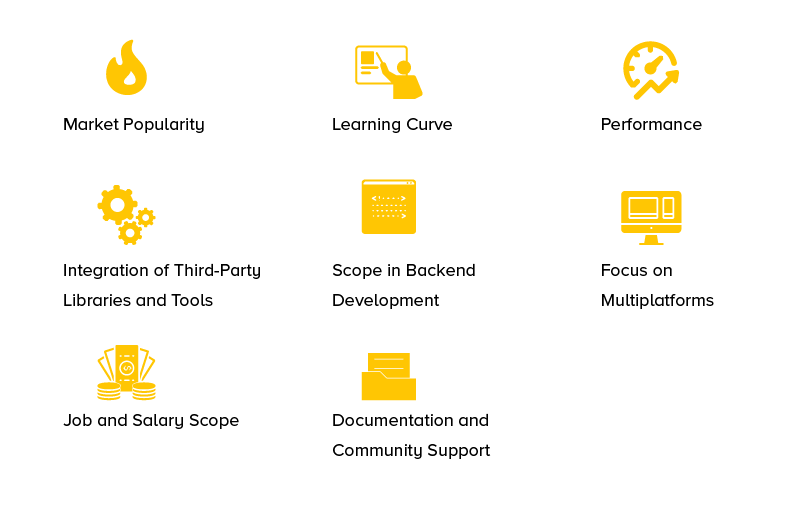 Both Kotlin and Flutter are open-source and free to use tools. Because of this, developers are showing an interest in working with both.

If you check Google Trends, Flutter is showing a steep rise in its popularity when compared to Kotlin. Likewise, if you compare Kotlin and Flutter based on their GitHub presence, the former has 28.3K stars and 3.29K forks while the latter has 69.5K stars and 8.11 forks.

This indicates that Flutter is getting a huge momentum in the market, compared to Kotlin.

If you consider the learning curve as a factor of comparison in the Flutter vs Kotlin native battle, the latter undeniably wins. A reason behind is that it is interoperable with Java and Google offered various Kotlin learning courses a few months back.

Because of this, Flutter wins the competition.

Flutter lets developers use the same language for both layout and backend needs, enjoy higher animation speed, and much more.

But, in comparison to Kotlin, it is still lagging much behind in the market. The prime reasoning behind which is that Kotlin multiplatform code compiles exactly in the format as that of the targeted platform.

So, the winner of Flutter vs Kotlin multiplatform performance battle is the latter.

4.  Integration of Third-Party Libraries and Tools

Kotlin multiplatform operates within the native platform ecosystems rather than building one. So, app experts can employ the same tools and libraries they have been using during native development, including Jetpack Compose and SwiftUI. Which ultimately means they need not look for third-party libraries and tools to bridge a connection with native environment.

However, it is required in the case of the Flutter cross-platform SDK, provided it is basically a UI development tool.

When it comes to considering backend development services to know the difference between Kotlin multiplatform and Flutter, the former again has an edge over the latter.

Currently, applications designed for targeting mobile (Android and iOS) and web comes under the Flutter use cases. One cannot use it for making their presence on tvOS, Android Auto, CarOS, and WatchOS.

However, there is no such constraint in the case of Kotlin multiplatform. It is designed to develop app projects for devices and platforms beyond mobile as well.

So, preferring Kotlin multiplatform is a good choice for mobile application development services companies for launching their app idea on every imaginable platform and device.

Another important factor to consider while looking into Kotlin multiplatform vs Flutter comparison is job and salary scope.

As per the StackShare community, Kotlin programming language is mentioned among the tech stacks by 268 companies and 210 developers, whereas Flutter is listed as a technology stack by 42 companies and 146 developers.

Now, since Kotlin multiplatform is not an independent platform. It is an experimental extension of the native language and one can use it within Kotlin native environment, it gives an impression that it has more job options in the market.

Compared to Flutter, Kotlin multiplatform is still new and in fact, in an experimental state. Because of this, the documentation and community support for the latter is somewhat lagging behind the former. But, it is expected that the documentation as well as community strength will improve once the multiplatform becomes stable; further encouraging all to use Kotlin for cross-platform development.

Who’s the winner of the Cross-platform development battle?

Both Kotlin multiplatform and Flutter are reliable, aim to reduce time to make a presence on both Android and iOS platforms, and are supported by Google. They are giving cut-throat competition to each other and are becoming more competitive with every release.

In such a scenario, it is advisable to consult with mobility experts and analyze your cross-platform app requirements and priorities to determine which one is better – Kotlin vs Flutter.