Till around two years ago, the job description of an Android developer, across the world, called for people who had an in-depth understanding of the Java language.

Entrepreneurs, looking to make an entry in the Android app market had Java experience on top of their shortlisting list.

But then came Google I/O 2017 and things changed.

In its 2017 developer conference, Google made a big unanticipated announcement. One that completely changed the dynamics of Android app development for not just developers but also entrepreneurs.

And this announcement was of Making Kotlin the official language for Android mobile app development.

It only took a few minutes for the news to spread like wildfire and the interest that the internet world showered towards Kotlin went mainstream.

In fact, the interest that spiked back then in 2017, has not stopped rising ever since.

Ever since the official announcement, a massive number of android app developers have expanded their skillset to Kotlin, while on the other hand, a number of entrepreneurs are constantly making an effort to understand how Kotlin for Android App Development would serve them.

The demand that Kotlin has received in these past few years is almost in sync with its adoption rate. A rate that was mainly driven by brands like Postmates, Evernote and many other popular apps made in Kotlin, who went with the idea of choosing Kotlin over Java mobile app development.

The reasons behind these famous app brands and various other startups choosing Kotlin were almost similar to each other. Reasons that were in-line with the answers to why use Kotlin for Android development – 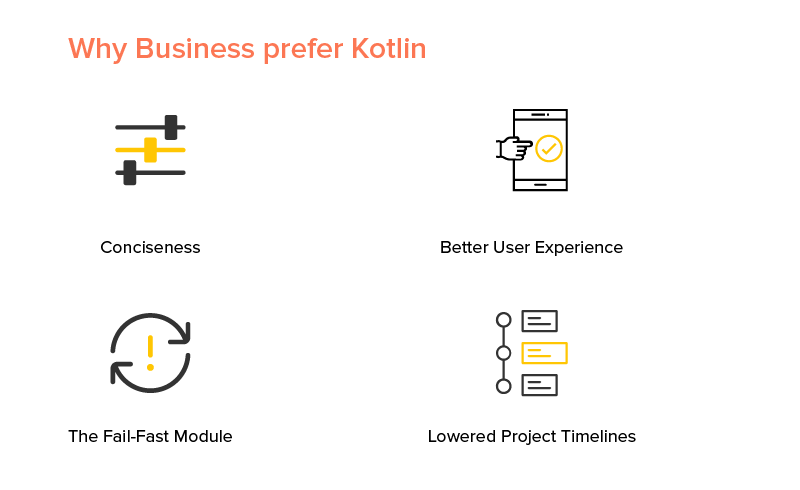 One of the prime benefits of Kotlin programming language is that the codes written are very concise.

The way Kotlin language is written lowers the number of boilerplate codes to a great extent which ultimately increases productivity, very less room for error, and a lot reliable and safer code.

One of the main benefits of switching to Kotlin is amazing user experience. The cases of bugs and app crashes are very less heard of when we talk about Kotlin for Android development. And when these things are missing, the user experience count automatically increases by manifold.

Google introduced a fail-fast mechanism with Kotlin which helps in immediately reporting any issue in coding which is most likely to end up as a failure. As soon as any problem emerges, the system fails, making it impossible for the Android app developers to move to the next stage.

This option has never been available in the case of Java programming language.

The brevity factors that Kotlin comes with mean that the language can solve a series of problems with a limited line of codes. This mixed with the conciseness factors bring down the time required to build a mobile app to a huge extent.

These reasons have been seen to make a massive impact on the life of the enterprises and developers equally. But are these reasons and the fact that Kotlin is one of the best programming languages for mobile apps in 2019, enough to say that it is time to not focus on Java framework and libraries for entering Android market?

Should entrepreneurs now shift their focus on Kotlin in place of considering Java for Android development?

Let us find out through this comparative article looking into the differences between Java and Kotlin and how both the best programming languages for mobile apps stack up against each other.

Now the best way to compare a language against another is through understanding their individual features and limitations.

Kotlin vs Java: Pro and Cons of the two mobile app programming languages

With the pros and cons of both the languages not listed and attended to, the next matter of importance is to see the differences in black and white –

Java vs Kotlin: The Difference Points 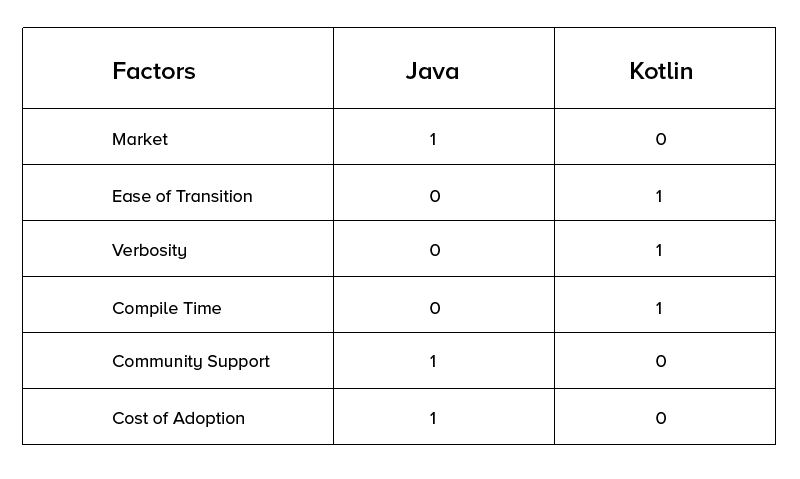 Kotlin for Android applications, although working in the background for some time, got its fair share of popularity in 2017, when Google announced that it would be the official programming language.

But the history that Java carries in the Android world is unquestionable. And this history added with the fact that Kotlin is still too new to replace Java in terms of developers’ experience gives a justifiable answer to the question, “Is it necessary for developers to learn Kotlin”.

So, when it comes to analyzing the scope of Kotlin vs Java in 2020, the latter still holds a huge momentum in the marketplace.

Kotlin has been developed with a single-handed focus on interoperability. It means that developers can easily translate the Java code in Kotlin or vice versa without bringing any changes in terms of operability.

While there are some factors that are present in Java which is better than Kotlin and some where Kotlin Android Development is better.

But because both Java and Kotlin compile to the JVM Bytecode, there is no difference in the user experience front.

However, simply on the grounds of ease, the point goes to Kotlin.

Java’s verbosity is known to come with a series of shortcomings.

Kotlin, on the other hand, has been designed to lower the amount of boilerplate code which ones need to write. Kotlin also comes with a series of other functionalities that mark it above Java, like – Coroutines, Null-Safety, and Extensions.

When it comes to verbosity, the answer of whether to consider Java or Kotlin for app development is Kotlin.

Kotlin language runs almost as fast as Java because of similar bytecode structure, however, Kotlin allows the code using lambdas run even faster compared to same code mentioned in Java.

The fact that Kotlin app development process decreases compile-time, increases productivity to a great extent, brings an impression that the future of Kotlin is blindingly brighter when compared to Java.

The history that Java comes with for being in the Android industry since more than two decades, gives it much higher community support as compared to Kotlin.

The benefit that massive community support offers is something that Kotlin is yet to gain because of being in a growing stage.

So, the winner of Java vs Kotlin battle in terms of Community support is the former.

Kotlin is open-source. And because of that developers can easily explore the language by simply translating it through the Java-Kotlin converter. Also, because it can integrate into the building tools such as Maven, Ant, Gradle, etc, the whole process becomes all the easier.

But because Kotlin apps are still new in the industry, the developmental learning curve is pretty high, meaning your team of developers will have to spend more time getting a hang of the language.

Because of the learning curve, the point falls on the side of Kotlin as compared to Java.

With Kotlin and Java compared, it is likely that you would have noticed a weightage of preference towards the development of Kotlin use cases as compared to Java. The reason behind this inclination lies in the fact that Kotlin solves some of the most persistent Java issues with the utmost ease.

Let us see how.

In case of Java mobile application development, long lines of code are supposed to be written to perform any task. An issue that Kotlin flawlessly solves. With Kotlin, it becomes very easy for the developers to write large projects, in half the time.

Not only this. Kotlin understands that comprehension would always supersede conciseness. And with this understanding, the language comes packed with comprehension features like a readable, concise, and substantial syntax.

The core purpose of introducing Kotlin to the Mobile App Development industry was interoperability. From the very start, the intention of Kotlin language has been to give the developers the ease to write modules in Kotlin that would then work flawlessly even with a Java code – all through the use of a Kotlin compiler.

The checked expectation facility of Java can be a little problematic. These are when compiler forces function caller to catch an exception. This, in return, makes it very difficult for the developers to weed through code and identify a nonexistent exception.

Raw types allow backward compatibility but can also throw the CastClassException, which more often than not result in an error occurring during the execution and not compiling stage.

By not allowing raw types, every Kotlin apps development company is able to create a type-safe code.

By not allowing raw types, Kotlin developers are able to create a type-safe code.

Now that we have dissected into the Java vs Kotlin debate to a good extent and have even looked into the ways Kotlin can, in fact, be a better option for developers and in return enterprises, it all boils down to this – Will Kotlin replace Java?

Having planned Android app development in both Java and Kotlin languages for a variety of different app types, we believe that Kotlin does have a series of benefits that places it several points ahead of Java. But the time is too soon to say that Kotlin will replace Java for the community support that the latter comes with is uncontested.

Businesses should choose an Android app development service that holds expertise in both Java and Kotlin, instead of concentrating and restricting themselves to a Java or Kotlin Android application development company.

FAQs About Kotlin vs Java

Q. What is Kotlin Used For?

Kotlin is primarily used for building Android mobility solutions but its code-sharing features also come in handy when developing iOS apps. Kotlin comes loaded with some characteristics of cross-platform development.

[Know in detail here: Kotlin Vs Flutter: Who Will Rule the Cross-platform App Market? ]

Q. Which is Better Kotlin or Java?

Kotlin is yet to reach the state of mass adoption that Java is presently on, making it difficult to comment if Kotlin is indeed better than Java. But from a birds view level, Kotlin does come with features which are better than Java’s

Q. How is Kotlin Different From Java?

When it comes to focusing on comparing Kotlin and Java, there are a number of factors that show Kotlin is different from Java. Some of them are:-

Yes, Kotlin comes with share code feature which enables it to share the codes between Android and iOS.

Q. Is Kotlin Easier and Faster Than Java?

Yes and No. While Kotlin wins the race in terms of performance, it is not easier to learn and deploy like Java.

Q. Can Java be used to make iOS apps?

Yes, Java can be used for iOS development – all thanks to OpenJDK.