New York is Warming up to the Idea of Legalized eScooters

If all bodes well, New York state’s roads will soon be crowded by the many eScooter riding millennials.

15 days after Germany legalized eScooters to run in the streets, New York too has now softened to the idea of making eScooters and bikes legal in the state.

While the bill is still awaiting a consensus vote after which it would reach the desk of Governor Cuomo, the Governor has already given it a clean chit by denoting eScooters as “good idea” in his WAMC radio interview on Monday morning.

With eScooter mobility trend slowly catching up to the whole world one country or state at a time, we cannot help but wonder what is taking so long? Why hasn’t the whole world already smoothened up to the idea of making eScooters legal?

Well, the reason behind this is the way they operate and crowd the roads and even the sidewalks also trees at times.

Even after offering numerous benefits to not just environment but also the economy as a whole, eScooters are still deemed as nuainces by many because of the carelessness that comes attached with them. And even if you ignore that people ride them on the sidewalks and disrupt the walkers, the accident prone nature of the eScooters gets a little too on the face to ignore.

So why is the trend seeing a shift now?

With companies like Bird, Jump, and Lime having entered the micro-mobility space, a new set of stringent standards in terms of eScooter usage are in place now. Also, these comapnies are working in close contact with local governments to ensure that no policies are being broken.

These efforts that are being taken by businesses have not gone unrecognized by governments and ergo more and more governments are now opening up to the idea of controlled legalization of e scooters, as long as the rules and regulations of the street are maintained. 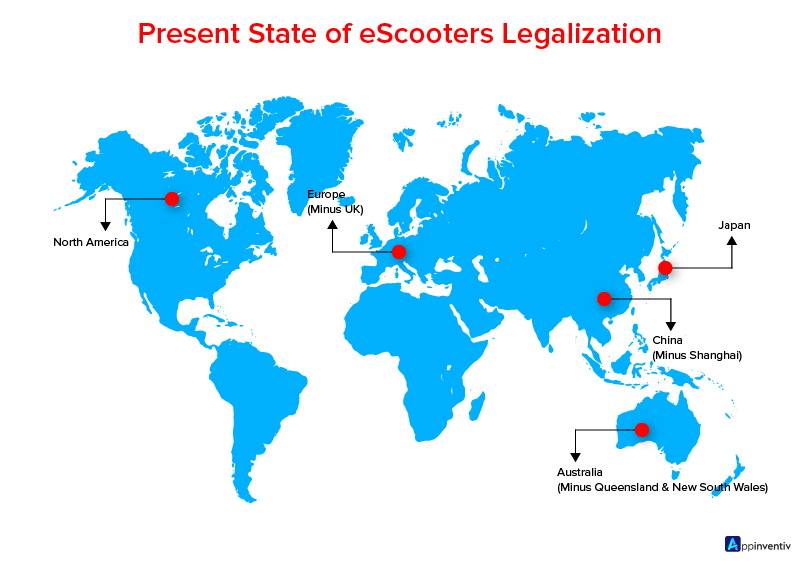 What Do These Legalizations Mean for eScooter App Startups Exploring the Micro Mobility Industry?

While on a general front, the legalizations have come across as good news for the eScooter app businesses, the case with New York law is a little different.

Even if the bill gets signed by the law, the cities will still need to decide if scooter sharing companies should be allowed to function in the city.

However, this has still come across as positive news for Lime and Bird. Paul Steely White, Bird’s director of safety policy and advocacy shared the plans of next year spring launch in New York with the Verge magazine. He also commented on the bill, stating that “The weight of this moment cannot be overstated”.

The sentiments shown by Paul Steely are a sign that the eScooter app businesses are set to only flourish with more and more countries and states now opening up to the idea of planned legalization of eScooters and bikes.