If I shouted “iOS or Android” in the middle of a crowd, the following two things may happen:

This is not to say that iOS is better (let’s not start a war!!).

In fact, Apple has been popularly restrictive while approving apps. Its stringent policies require all apps to be top-notch before they make it to Appstore. And here’s the interesting part – developers still prefer developing iOS apps for the OS’ popularity and higher earning potential.

As per StatCounter data, of all the mobile devices connected to the internet, 27% are connected via iOS devices. And as per Apple’s data release earlier this year, over 2.22 million iOS apps are available on the Appstore.

The above image shows the total number of apps that are available in leading app stores as of 1st quarter 2021.

But to get past Apple’s scary approval guidelines, iOS app developers must maintain the quality threshold set for iOS apps. Selecting the right coding language for apps can make this an easy sail for you.

And for that, there are bottomless factors to consider: an optimum talent pool, ease of learning and development, cross-platform support, scalability, cost of development, and so on.

Let’s have a look at our options for programming languages.

No matter how new you are to the world of iOS App Development language, there are very high chances that your response to the question that we are answering is Swift. It is one of the most preferred languages to shape the future of iOS app development.

Released in 2014, Swift has become one of the most popular coding apps for iPhone programming languages. According to Tiobe index for Swift in 2020, Swift was ranked as the 11th most popular language with almost 3x as many votes as the year before.

Swift is a general-purpose programming language used to develop superior-quality native apps specifically for iOS. It is designed to work well with frameworks like Cocoa Touch and Cocoa.

The most significant disadvantage of this coding language is its limited user base.

If you want to carry out swift app development and scale the app quickly, Swift is your best bet. It can be used as a language app for iPhone app programming language, iPad, Apple Watch, Apple TV and Mac.

There has always been a comparison between Objective C and Swift in terms of readability, coding, execution time, code maintenance and so on.

However, it carries several cons that make it a bit outdated as an iOS development language in 2021.

Its unavailability as an open-source language makes it difficult to learn. Plus, the security issues, limited functionality, and lack of updates also weigh down its popularity.

On the other hand, it is often seen as a stable and mature language.

You can use Objective-C as an iOS programming language only when you want to develop or update apps for the older iOS versions that Swift does not support.

A popular coding language for apps, Flutter was developed by Google in the year 2015 and launched in 2017 officially. It is a highly versatile open-source development kit and can be used to create apps for iOS, Android, Mac, Linux, Windows, and Google Fuchsia.

Flutter allows the developers to create aesthetically attractive and intuitive cross-platform apps, that is why it is considered by both android and iOS developers. But, of course, this also comes with its set of pros and cons. Some of which is that it is highly cost and time-efficient, provides full customisation capability, has its widgets and is available as an open-source language; at the same time, it still has a limited and young talent pool. 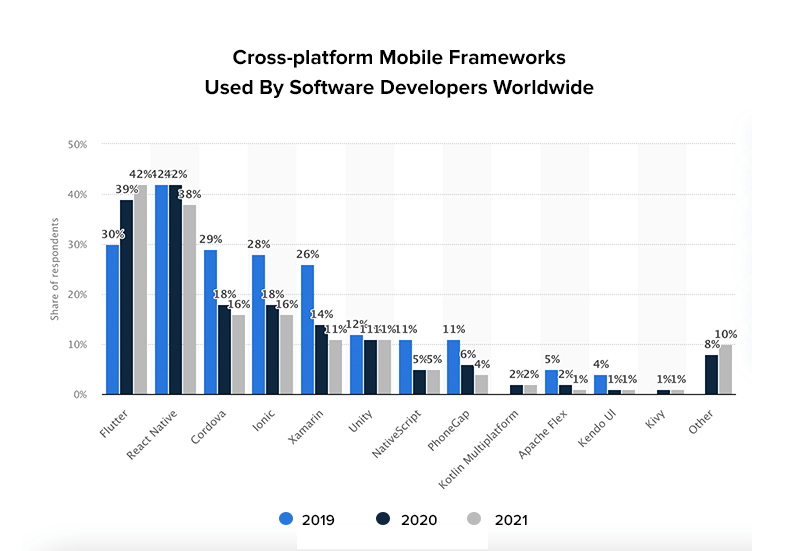 Being the most popular cross-platform app development language, it is best to use Flutter when you want to create an iOS app and make the Android, desktop and Web app versions for it. It can save a lot of time since you can make use of the iOS app programming language to create app versions for all compatible OS’ and platforms using a single codebase.

Furthermore, according to a survey conducted by StackOverflow, C# is considered one of the most versatile coding languages worldwide and is ranked 5th in the Tiobe August 2021 index.

In terms of its pros, C# is an open-source language and makes iOS mobile app development relatively easier for intermediate to advanced level developers. Moreover, it has a vast talent pool, supports cross-platform app development, offers a rich library, and provides better cost-benefit and integration than other coding languages. However, it does have a few downsides as well like, it consists of a poor platform GUI and can be considered as difficult to learn for beginners.

It can be mainly used when your team has experienced C# developers and when you wish to develop Android, Windows, and Web API versions of the iOS app.

As an iOS app development language, app developers used it in combination with JavaScript and CSS. In fact, as per the W3techs, HTML5 is used by almost 88.5% of all the websites.

Though not as preferred as native apps, hybrid apps still provide excellent browser control and use the combination (HTML5 with CSS) for rendering pages.

Its pros include multi-platform support, excellent cost-effectiveness, consistency across many browsers, offline browsing, and it even enables a good page ranking. However, there are a few cons, like it only works for hybrid app development, has limited functionality, and can cause problems with design responsiveness.

This is the best choice when you do not want to invest too much time and resources in developing an iOS app and have a simple app design that can be accessed offline. For high-quality and functionality iPhone apps, though, it might not be the right choice. 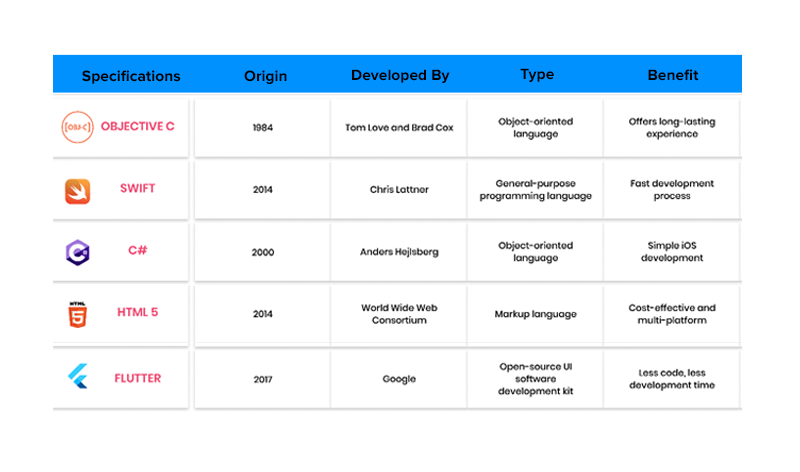 The best Programming language for iOS in 2021 turns out to be Swift, all factors considered.

As we began this article talking about the superior loyalty of iOS users, Swift is one coding language that fits the bills of creating a loyalty-worthy application perfectly.

The reason why businesses choose Swift is because of Its intuitiveness and consciousness in creating native apps are among the most significant positive factors that work in its favour. Furthermore, Swift was explicitly developed to be faster than the earlier available language – Objective-C. Even on the security front, it is one of the better options. And the fact of the matter is that the only downside Swift has currently is the relatively small talent pool compared to the older coding languages. 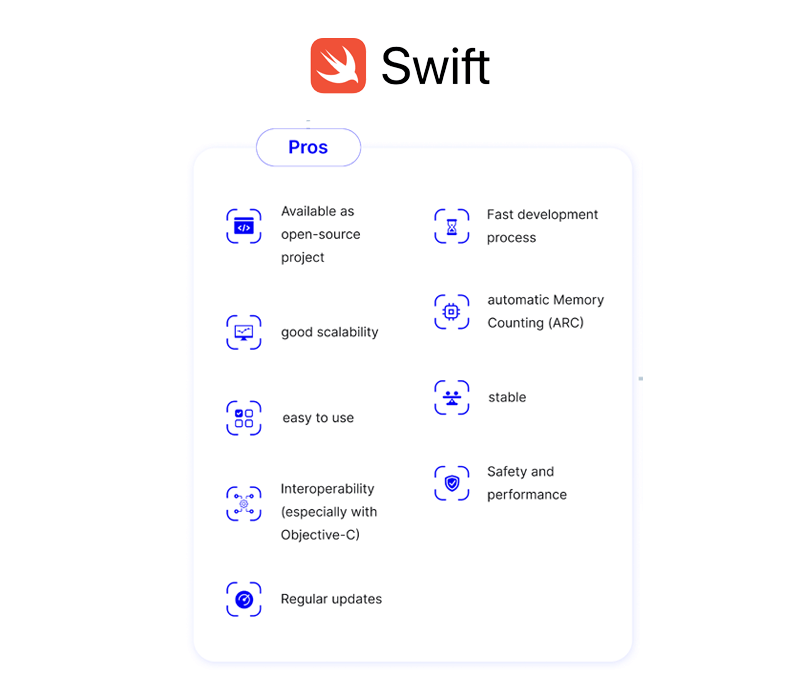 According to a survey conducted by StackOverflow, various iOS languages can be ranked above Swift for their wide range of advantages. However, that also depends on your priorities. For a quick hybrid app, it might be HTML5, and for a multiple-platform development that includes Microsoft, it might be C#.

However, as far as Apple and Apple products go, Swift leads the chart. Thus, if you need any help regarding your iphone app development services, then plz choose an iphone application development company like appinventiv to help you in your project.

How Can App Clips Help Your Business Acquire More Customers