Metaverse: The New Web is Here, Where are You?

The metaverse isn’t just the latest buzzword of the IT industry but a fast-emerging (virtual) reality. Catapulted to prime time television with Facebook’s long-term commitment to become the Mecca of metaverses, questions remain on how such digital universes will be structured having emerged with a loud and clear big bang.

But rest assured, at Appinventiv we keep tabs on everything that is near and dear to our partners. Therefore, in this article, we will touch base with the fundamental aspects of the Metaverse in light of its bearings on the techno-social world at large.

What is the Metaverse?

“Metaverse” the term was first coined in 1992 in Snow Crash, a Neil Stephenson sci-fi novel that propounds the onset of a dystopian digital reality where the physical world has become inhabitable and the only exit is through virtual reality.

The Metaverse, in its marketed form factor, is preserving its sanctity though. As described by Facebook, the Metaverse would be a unification of physical and virtual realities enabling peer-to-peer, lifelike interaction in digital work environments. Collaborations would imitate real-world experiences where AR and VR elements would combine to allow users to experience palpable conditions unbounded by the laws of physics (perhaps). Be it traveling, frolicking, working, or running you could theoretically do it all on the metaverse.

Many visionaries see the current version of the web as full of loose ends and irreparable chasms. The metaverse, in their view, could be the binding glue providing for interoperable, multi-sensory, and commercially viable conditions.

As we would discover in the later sections of this article, Facebook isn’t the only flagbearer of the metaverse concept. In fact, these mixed reality environments are taking both centralized and distributed approaches towards mainstreaming with the help of AR VR software development.

Let us look at the two most defining characteristics of a Metaverse platform:

The Metaverse technology would constitute an interplay between aspects of both AR and VR. A Metaverse app is expected to have a semblance of space and time akin to the real world. Interactions in the physical world could be visual, auditory, and dynamic in nature. A Metaverse platform is expected to deliver experiences on the same lines for digital collaboration.

A Metaverse app should be interoperable between one or more Metaverse platform(s).

The Metaverse app development points to a variegated spectrum of technological horizons that remain to be tested out. Depending upon who is developing it, be it a Metaverse startup or a legacy bigwig, its provisions could range from limiting experiences to open-ended, transmutable ones. Similarly, there is no shortage of toolkits that can be deployed for manifesting this future reality into existence. Such developer toolkits comprise the Unreal Engine, Unity, Amazon’s Sumerian, Blender, and Maya.

The Metaverse technology marketplace is expected to be valued at $800 billion by 2025 as per Bloomberg Intelligence and could possibly reach the $2.5 trillion threshold by 2030. The industry has been receiving the external stimuli of attention it needs to reshape both the virtual reality technology and the future. Let us explore some of the leading projects precipitating the emergence of Metaverse technology.

Top Metaverse Projects to know about

Micro-colonies of metaverses are popping up with the Big Tech elite spreading their wings to take flight.

Earlier this year at Microsoft’s Build Conference, CEO Satya Nadella alluded to efforts that are underway to engineer a representational infrastructure layer that will be an offspring of the culmination of physical and digital worlds. Through this enterprise metaverse stack, developers would have the capability to replicate real-world assets such as workspaces, warehouses, retail stores, etc. onto Microsofts’ platform.

Unlike the fancy avatars that the audience was introduced to in Facebook’s Meta makeover, the Microsoft platform would be rooted much closer to reality. It will create digital twins targeting a broader ambit of services that mega-corporations can avail.

For instance, manufacturing entities could train employees using metaverse VR. Similarly, workforce training would take a whole new meaning with metaverse AR, where digitally mapped simulations would allow engineers to alter and validate component designs. In essence, this spells the onset of a metaverse AI that could learn and re-learn through data collection. 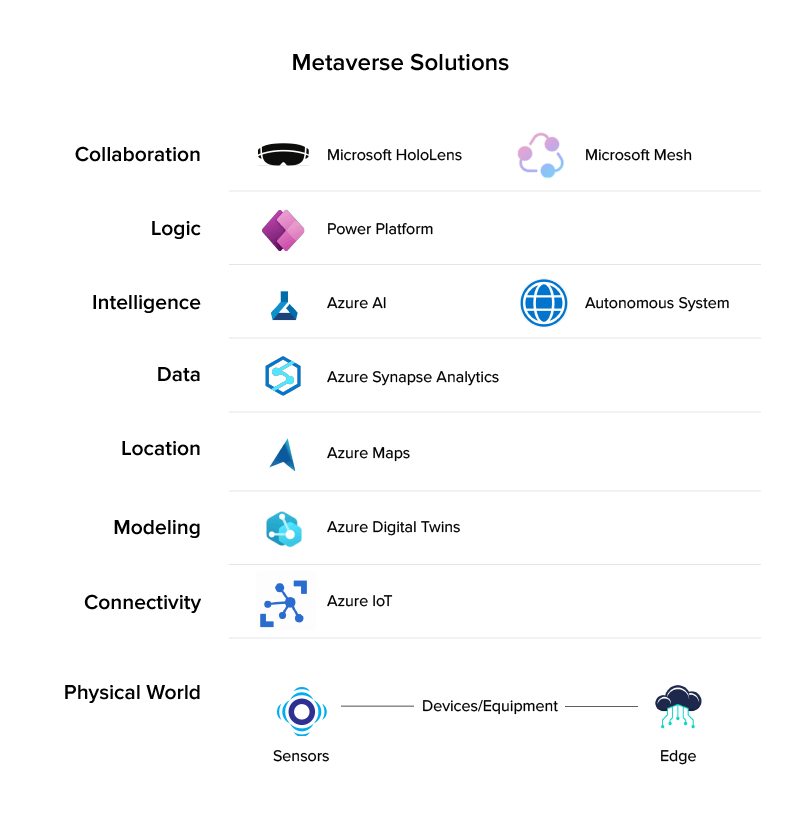 Nvidia launched its Omniverse platform in 2019. The company has taken an open-sourced approach to invite enterprise clients to try out the omniverse. Developers can build, license, and distribute apps with over 200 pre-built extensions.

Elaborating more on his metaverse example, he signals that the evolution of USD would play the same role for mixed reality ecosystems that the development of HTML did for the 2D web.

Nvidia presents its omniverse as a 3D web browser that can be logged into with “workstations and laptops”. Users can utilize metaverse AR to experience the visualizations of Omniverse by “streaming RTX to their platform”. RTX is another visualization platform by Nvidia. 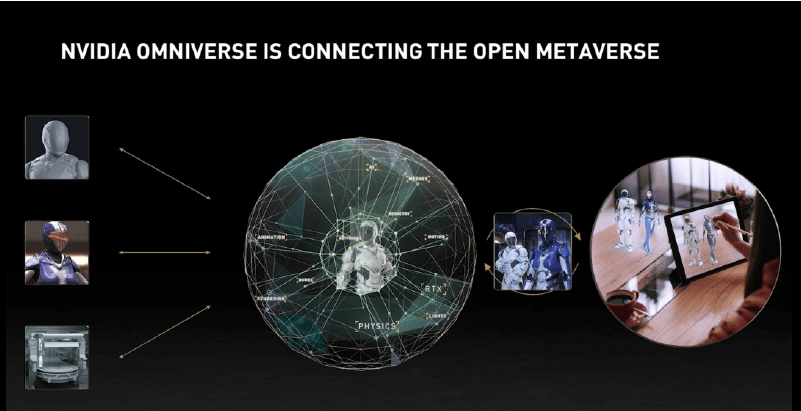 Unlike Microsoft and Nvidia who were early to the metaverse startup party, Facebook is yet to unveil a workable iteration of its metaverse AR.

However, the social technology company has made its intentions clear by promising to create 10,000 jobs in Europe dedicated to the metaverse AR and metaverse VR projects. For the foreseeable future, the undertaking is expected to consume about 30% of Facebook’s cash flow.

The gaming company has allocated a fund of $1 billion to its version of the metaverse but unlike others, Epic Games aims to create an open-sourced platform for users.

From the look of things, it appears that there may be multiple types of metaverses, as has turned out to be the case with blockchains, with resourceful organizations taking the lead and others following suit.

Let us look at some of the change-making technologies introducing some method to the madness in this space.

If cryptocurrencies were struggling to find real-world economical applications, they have now. Digital currencies can be used to incentivize the purchase and sale of assets in virtual environments.

Non Fungible Tokens (NFT) can be used to establish ownership and authenticity. Blockchains would legitimize the storage, credibility, and transfer of crypto-value once the metaverse gets going.

Blockchains have demonstrated their interoperable, immutable, and scalability quotient, KPAs that this future of virtual reality technology so desperately needs. Together with cryptocurrencies, they will act as the technological pillar asserting digital asset custodianship beyond doubt.

AR and VR are the cornerstones for metaverse projects. Augmented reality systems operate on three essentialities namely a coupling of real and virtual environments, real-time interaction, and precise 3D visualization of objects.

AR apps hold the edge over VR apps in their rate of adoption as they can be installed and used on any camera-enabled device. AR adds immersive elements to objects acting as an informational enhancer. Users do not need ad-hoc wearables to experience the utility of AR.

VR, on the other hand, is an entirely simulated experience in an artificial, digital world. It is used to deliver sensory experiences at par with the physical reality of the user. VRs are a little more expensive than AR systems as you need additional equipment such as a head-mounted display or multimodal projection screen(s).

It is the combination of AR and VR, also referred to as Extended Reality (XR) that we would experience in metaverse VR apps.

Artificial Intelligence as an academic discipline has come of age. Its applications reach far and wide into the business world be it automated decision-making systems, self-driving cars, or recommendation algorithms. There is talk of implementing metaverse AI by virtue of Non-Playing Characters (NPCs).

NPCs are subsidiary elements that are integrated into the gameplay to provide interactive experiences within virtual settings. Research is on to augment the metaverse AI and live 3D settings with the same. The best part is, AI NPCs can be customized so that the same copy is used contemporaneously by millions of users.

Developers can also use AI for image classification, facial recognition, and high-end computer imaging and refinement to add realistic effects for graphics.

The adoption of this technology has been spurred by the onset of the COVID-19 pandemic. The real estate sector was one such keen adopter. Since property visits were canceled due to lockdown restrictions, savvy dealers turned to technology to reconstruct virtual avatars of living spaces and offer digital property tours.

3D reconstruction has the potential to make the metaverse appear as lively and lifelike as possible. 3D spatial data and 4K HD photography will be applied to a large extent to create digital replicas of our world.

Real-time simulations demand real-time data and IoT as we all know has incorporated billions of devices onto a livewire network for real-time data collection.

What better way to use this feed than to inject it into the metaverse and see the simulations come to life! The possibilities of IoT, interoperating with AI, ML, and 5G to offer seamless data integration and interactions are limitless.

[Also Read: How can your business enter the metaverse?]

Challenges of the Metaverse

Now that we have a basic understanding of examples of metaverses, and the future of virtual reality alongside it, it is time to analyze its shortcomings and challenges.

Since a super-moderator, fiduciary slash regulatory body for metaverse(s) is yet to be established, if at all, it remains to be seen how identity authentication and privacy control will be tackled. State of the art Identity Access Management systems have to be baked into the proverbial nervous system of the metaverse.

Also, state actors should consider enveloping the still-nascent industry under GDPR or a reformed version thereof for added data protection.

Launch Yourself into the Metaverse

Appinventiv is an intercontinental IT solutions venture and home to some of the brightest minds in the industry. We’ve partnered with some of the biggest brands on the planet to create unique business propositions. Our team of 650+ experts is here to provide you with the launchpad you need for your metaverse debut. Connect with us, to explore the opportunities.

Metaverse use cases and benefits

With multiple iterations, the digital transformation continues to bring vast opportunities to modern businesses. Technology has come a long way from using static websites to navigating a web 2 experience for the global audience. Although the biggest shift in the chain of web evolution is brought by Metaverse.  The concept of Metaverse was initially coined…

How to build a platform like TikTok Effect House?

Remember the time when you first tested the lens you had to buy from your favorite optical shop right through an AR app? Or when you used a dog face filter when going live on a social media application? Everyone in the digital space has used an AR filter to create content at least once.…

Amardeep Rawat
You have a vision. We have a way to get you there.
Global Leader in new age digital product development
Speak to our experts