How Much Does Cleo like AI App Development Cost?

Among the many differences that lie between millennials and the Generation X lies the art of saving. Sometimes enough to create a life for their next generations.

Now we are not saying that millennials are not thinking about saving and investing – if not for their future family then for their next vacation or funding their dream car. What we are saying that the Gen Y is struggling with making savings a natural habit.

The intensity of intention that they carry towards maintaining a non-vacant bank account is something that has led to the onset of digital budgeting solution, which reminds them from time to time of their spending abilities.

The app category in itself is in a developing stage, meaning there is a lot of market and less options for the millennials to work around – a profitable position for Fintech enthused entrepreneurs.

A brand that has not just identified this opportunity but is also ruling the phones of millennial user base through its quirky voice is Cleo, which is setting the use cases for creating a fintech app with AI.

In this article, we are going to look at the application in detail from the perspective of how much does Cleo like AI app development cost.

Cleo is an AI based budgeting application which acts as a sassy Siri for your budgeting and financing needs. The application makes you a budget, helps in building your savings and talks to you about financial life and spending habits. It also comes with a wallet account which helps in saving funds, and gives users some sort of an overdraft protection.

Till date more than 2 million users have joined the application to interact with a sassy friend who can keep them in line when it comes to spending more than they can afford. 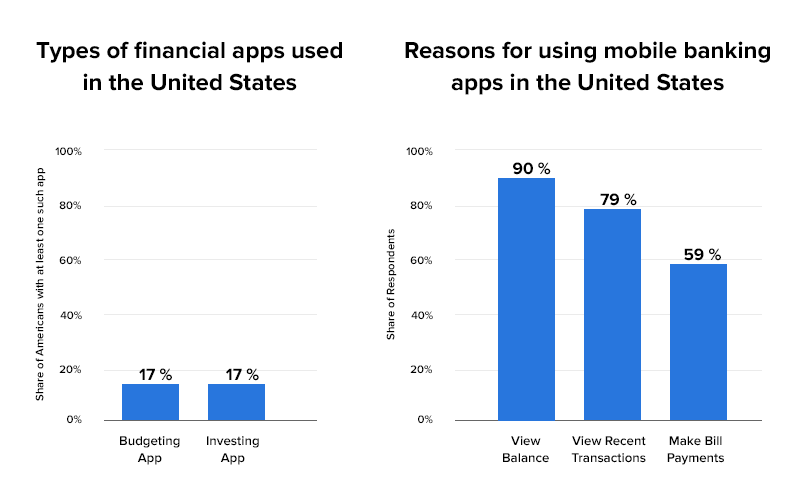 When we look at the Fintech industry trends as a whole, we can find that the subset of budgeting apps is still very small, as you can see in the image above. While presently not in abundance, the market players of the digital finance system are bound to grow by leaps and bounds.

As the budgeting app market is preparing its mass popularity, Cleo is already sitting on top of the digital budgeting sector – a statement that can be validated from the news it is making.

The one thing that is motivating entrepreneurs to look in the direction of combining AI in Fintech and look for the answer to how much does Cleo clone app development cost is the scope of business expansions and partnerships that this unsaturated market is offering them.

Between the established market space and the news occurrence, the app has become one of the standard Fintech applications that entrepreneurs are willing to clone, something for which they are willing to pay a good sum of money. On that point, here is the first factor that carries an impact on the Cleo like AI app development cost.

Cleo is a one-version Fintech assistant application that majorly operates around two sub sections: A. Basic B. Advanced 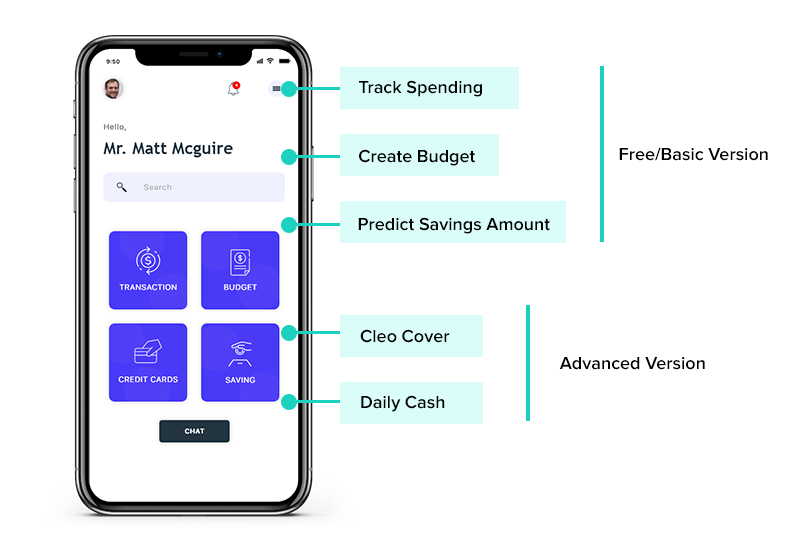 Here are the main features present in both the versions, individually.

The basic most feature of Cleo is the ability to track spendings. Once you link the bank account to the app, you’ll be able to view account balance, spending category, etc.

The app makes it very easy to set budget according to different categories and track budget throughout the month.

The users can either create their own budget or rely on AI recommendations for setting the limits. The app then monitors purchases and notifies when the budget limit is approaching.

The application doesn’t just track your spendings, upon detailed analysis it also tells the users when it’s time to save some money for rainy days.

Cleo Cover is an overdraft available to Plus members. The feature allows you to borrow $100 from the app. Cleo does not charge an interest on the loan, and gives users 3 to 28 days to pay back the loan.

Daily Cash gives users an instant cashback on their spendings in the Cleo wallet. The users choose ‘Money Makers’ on the basis of the stores which they shop at most and get cashback when they spend money at those Money Makers.

The next element after the feature set that answers how much does it cost to build an AI based mobile application like Cleo, is the design element of the Cleo clone app.

A Design System that Guarantees Your Cleo Like App’s Success

What is enticing about Cleo like interactive budgeting assistant apps is not the core service set that they offer but majorly the user experience that they give. At the core, these are chatbot applications – meaning the user interface focus should majorly be on the conversational innovation.

Noting how the user base of such budgeting and assistant based apps is millennials, the focus will have to be on conversational design. A thing to note here is that on papers, the designing cost of AI app like Cleo app development will be some parts more expensive than your non-conversational design elements. 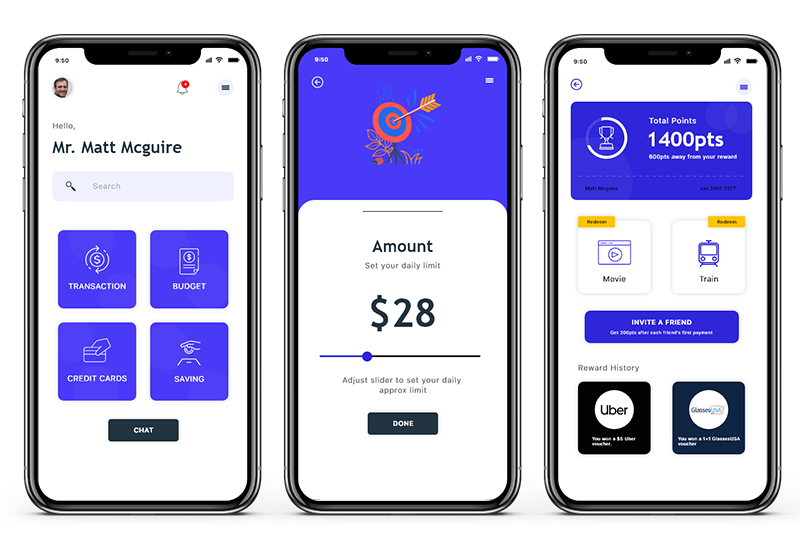 When we were designing Mudra, an app similar to Cleo in context, there were some key things that we considered in the UI and UX development of the application.

The tone that you set for your assistant will play a major role behind its success. In the case of Cleo, a sassy tone was used which roasts millennials – something that gives users viral content. In our case, we went with a subtle but funny personality, which users could see as an advisor and not a friend.

It is important to note that people don’t like interacting with any specific content type. Meaning, they would sometimes need explanations in words and sometimes a snarky comment in the face of memes. Noting that, we integrated multiple content types in the application – video, images, quiz-like, and textual.

When designing interactive applications for humans, it is important to note that we are designing for humans. Meaning, apart from conversation(y) content, we will also have to prepare the AI system or human representative for the time when the users get off track. Mudra was designed in a way that both human and AI systems were included in it. This made it possible to keep the users on the agenda when needed and engaged when needed.

In addition to push notifications, it is also important to remind users of the activity they have to perform or which is pending on their end.

When finalizing the UI design of your Cleo like application, the one important thing that you will have to note is that it has to be made like a chat based application compared to one that gives advice and insights to the users.

The estimation of cost of AI app like Cleo app development comes down to three main factors, which within themselves include the cost of implementing AI.

Number of features, the first factor, along with the technology stack is what separates a $10,000 application from a $100,000 mobile app. This difference is what mobile app complexity is known as. These separations play a massive role in deciding the sub-elements when answering how to build an AI app like Cleo.

The second factor that affects the development cost of an AI-based app like Cleo is the number of platforms the app would function on.

Going by the general rule of thumb, the cost of development effort of Artificial Intelligence apps would rise as you move from one platform, say Android or iOS to both Android and iOS. It will keep on rising as you add more platforms in the mix.

The third factor is the geographical location your partnered mobile app development is based in.

The average per hour mobile app development cost varies from East to West. While in the western nation like the USA or Australia, the average hourly rate would vary from $80 to $200, in Eastern nations like India, the cost would be somewhere around $25 to $80.

Besides these three, the Cleo like AI app development cost also depends on how you design an AI-powered chatbot. If you go by the design system we mentioned above, the mobile app design cost will fall in moderate to high level.

How Does Cleo App Makes Money

One of the most common follow up questions of how to create app with artificial intelligence is how to make money on them, especially when the invested cost is already very high.

For $5.99 a month, they give users a number of features like Cleo Cover, Daily Cash, and Interest Checking account.

While the monetization model is indeed best suited for Fintech apps, there are other approaches as well which you can follow such as in-app advertisements, featured visibility for partnered businesses, in-app purchase, etc.

What Is The Cost To Develop A Marketplace App Like Craigslist?

Remember how before the advent of technology, going to the market to get anything was a tedious task for us. And here we are talking about buying or selling things that often get cumbersome. Before technology was introduced, this task was tough. But now with the internet and online selling apps, it has become easy…