How Much does Flutter App Development Cost?

The process of estimating Flutter app development cost takes entrepreneurs through multiple factors and stages. Let us dig into them.

It took Flutter 2 years to come into the limelight. But Google I/O – 2018 mention brought the framework into the wishlist of new-age developers and startup founders.

Before the announcement, at the time when Flutter did not even exist, React Native was the ruler of the cross-platform domain. However, it took the industry one look into the Flutter offerings and the dependency on the React Native platform was forgotten.

The entrepreneurs now not just sang the tunes of the new feature-rich native-like framework but also started enquiring about the cost of Flutter app development.

It has been one year and the questions have not stopped.

But prior to getting the estimate of Flutter app development cost, it is first important to know what is the role of Flutter for cross-platform mobile development and the advantages of Flutter over react native. Things that can only be understood with the understanding of what is Flutter.

Flutter is an open-source mobile SDK that is used to develop native-looking iOS and Android apps from a single codebase.

The framework has been operative in the industry since 2015 when it was first introduced by Google but it popularized much later. Even though the time that the framework has spent in the market in a mainstream mode is only a year old, it has established itself as a modern reactive framework.

The popularity level that Flutter has formed for itself is so much so that the answer to what is Flutter often draws parallels between the framework and React Native.

The apps made in Flutter are developed using Dart – an object-oriented programming language.

The ruling idea behind the features of Flutter is that it revolves around widgets. The complete Flutter UI is developed by mixing multiple widgets, with each defining structural elements like menu or button, a style element, like color or font, or an aspect layout such as padding, etc.

Flutter does not make use of the OEM widgets, it works around its own factory-made widgets that seamlessly fit into both Android and iOS applications. 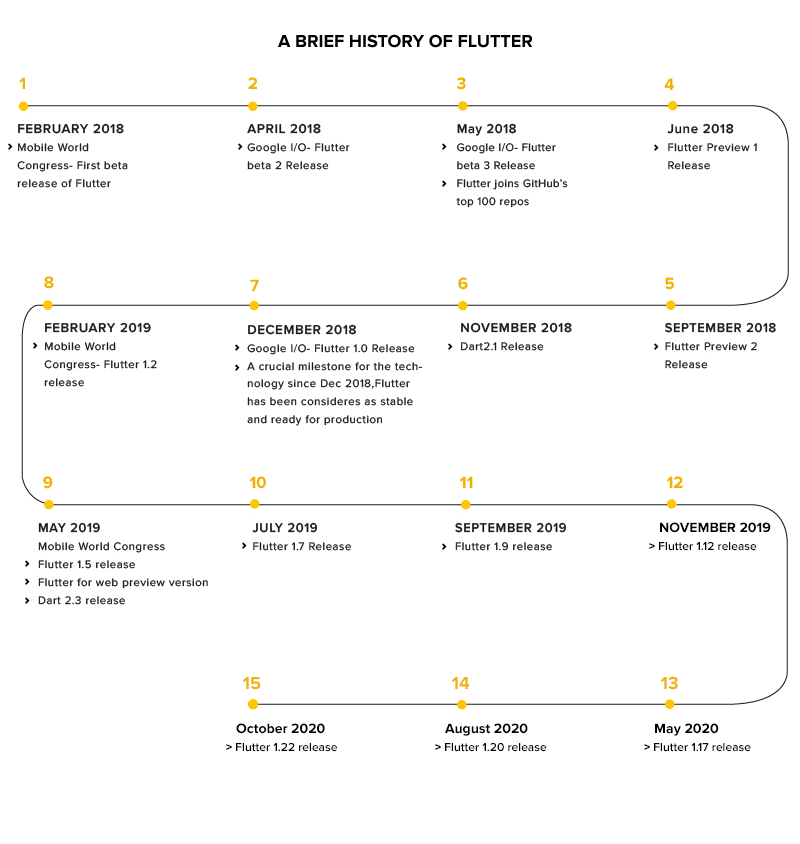 The frequent updates that Flutter shares are the doing of the growing demand of entrepreneurs who have based their trust on the cross-platform framework and the plethora of Flutter benefits.

There are a number of benefits that Flutter offers to the entrepreneurs to make them choose the framework over any other cross-platform app development approach.

Both Dart and Flutter are entirely open-source, meaning it is very easy for Flutter app developers to view the documentation and post their issues in the open developer forum. This, in return, lowers the learnability curve.

Since the Flutter widget is part of the application and not the platform, there is a very small chance that you would face any compatibility issues between Android and iOS. This translates into low testing time. One that gives a lot of weightage in Flutter’s favor when the parallels are drawn between Flutter vs React Native.

Expedited development is the answer to why use Flutter for entrepreneurs. It is also one of the most talked-about Flutter benefits that heavies the weight towards the advantage side of flutter advantages and disadvantages discussion is the expedited Flutter app development time. There are a number of ways through which Flutter makes it possible:

The Flutter app development system comes with a widget library that can be sued by developers for creating platform-specific widgets to give your apps a more native feel. In addition to the expansive library of widgets, developers also get to customize the application to the fullest, which offers a seamless UI giving users a memorable experience.

What validates Flutter pricing further is the fact that in its 1.22 update Flutter has extended support to both Android 11 and iOS 14.

It is very easy to compile Dart into native code. And there is a lack of need to access the OEM widgets because Flutter has its own. Both these factors together translate into low mediated communication between the platform and the app.

It is very easy for Flutter app developers to add and subtract edits when creating applications. Both Visual Studio and Android Studio makes up for smart completions on the basis of function definitions, imported modules, and variable types. In addition to this, you are enabled with the facility to push and pull any SCM service.

Flutter provides solid testing support to the testers. They get the ability to perform testing at different levels. The abilities make the process of UI testing as easy for them as unit testing.

The measures, mixed with the efficient features of Flutter, altogether bring down the testing time in addition to lowering the flutter cost.

Another factor that emerges as a prominent answer to why to use Flutter as the ideal cross-platform app development approach is the usage of a single-codebase.

When creating the Flutter app, designers and developers only have to focus on the creation of a single codebase – one version of the application that would run on both Android and iOS platforms.

Flutter is backed by Google. So naturally, the documentation is top of the class and so is the extent and stability of update versions. Plus, the semi-definite surety that it will not be killed mid-way.

While the advantages that we saw above: expedited development time, high performance, and single-codebase are usually deemed more startup centric, they are a huge attraction point for many established businesses as well, justifying the price point of Flutter cost.

Let us get you the answer.

What is the Cost of Developing Flutter App?

Now let us look at the ones which are in fact play a specific role in the cost of using Flutter for mobile development.

Every application can be divided into three sub-categories: Low, Medium, and High Complexity Applications when we take note of the features or functionalities and integrations.

This demarcation is done on the basis of these factors:

Usually, when we factor in the features and integrations, we talk around these app types –

It is common to find a number of feature shifts as you move from one application to another. While some might have x functionalities some would have y, while some apps would multi-factor authentication, others might not even ask you to log in, and so on and so forth.

Changing with these features set are the estimates of Flutter app development cost. For example, a currency converter app will cost a lot less than an IoT or ride-booking app.

The more the hardware you try to connect with your application, the more would be the answer to how much does it cost to build the Flutter app. This is why it is a more expensive deal to develop and integrate an app with a legacy system or connect it with wearables.

If your app calls for processing and storing user-generated data, you will have to take care of the server concerns. Weak servers can lead to a low-performing application and greater response time on the users’ end. Additionally, unreliable servers having a vulnerable protection system can also lead to personal data leaks of your users.

An intricate design is one of the most necessary parts of an application. Ask any Flutter app development company and they’ll tell you the more intuitive and free-flowing the design is, the more users would connect with the app at a personal level. Achieving this connection is something that does not come free or at a low cost.

But what comes as a relief for the money-bound app entrepreneurs is the low app designing cost that they pay when they invest in Flutter-based app.

The prominence of Flutter app maintenance cost in the price list is undeniable. No matter how new or old your application gets, you will have to keep updating it to meet your users’ changing demands.

This necessity of adding in users’ feedback and improvement demand in the application is what makes it an important element of the Flutter app development services.

There are mainly three things that we estimate Flutter app maintenance cost:

One thing entrepreneurs need to be aware of is that the app maintenance cost tends to increase over the app’s lifetime. As a general principle, companies tend to add 15-20% as the cost of Flutter app maintenance in their pricing list.

Location of the Agency

Location is a very important criterion when it comes to determining the Flutter mobile app development cost. 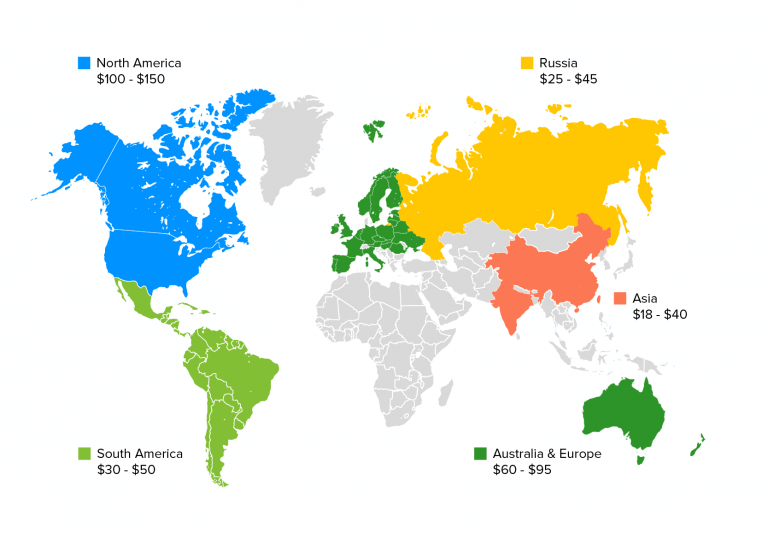 Once the Flutter app is developed, the next logical step is to publish it in the stores. As of now the Play Store and App Store are the two most preferred deployment platforms across the globe. These platforms, however, charge a fee.

In addition to this, both the stores take 30% of the share for every in-app purchase your application makes.

In addition to these factors, there is one other thing that is considered when estimating the cost of Flutter application development. Here’s what it is –

An incorrectly held product discovery phase, consisting of – initial contact, planning, drawing specifications, creating wireframes, and detailed estimates, can lead to the decline of a project even before it hits the stores.

It is very important for the project managers and development team to come together and chart the plan of action for app development and identify prospective loopholes that they might face during the development process.

All these factors come together to answer the cost of Flutter app development that you would have to incur for your app project. Now, giving a numeric answer will only be possible once you share with us your project requirement. So, don’t wait. Fill up the form below and hire flutter app developers that will help you validate and convert your app idea into an efficient product.

FAQs About Flutter and its Development Cost

Q1. How Flutter Reduces the Cost of Application Development?

Flutter app development comes with a number of cost-saving factors like low developmental effort, single codebase, low maintenance timeline, etc. All these come together to get its cost range down to a huge extent.

The Flutter app development cost is dependent on these set of factors:

Q3. Why choose the Flutter platform over others?

There are a number of reasons, but if we as Flutter app developers had to pin-point some of them, the two prominent reasons for choosing Flutter development services would be – A. Google’s Backing and B. The widgets that make your application Native-like.

Q4. Is Flutter a good idea for every app?

You can make any app of your wish with Flutter. It depends entirely on your development team’s efforts on how successfully they will be able to complete the project. But, between us, what we suggest is that you should opt for low to medium complexity apps when choosing Flutter. This way, the developmental efforts would be less and the time to market would be high.