Advantages of iPhone Application Development for Your Business

Apple has a tradition; every January, they disclose statistics to prove how well the App Store and iOS apps performed that year. This year’s announcements are an indicator of the staggering popularity and penetration of iPhone apps. Take a look…

These and the plethora of other App Store statistics gives the same message: Apple’s business is thriving and iPhone apps are a people’s favorite. Businesses looking to capture market share in apps would be making a lucrative deal by investing in iPhone application development for businesses.

Apple’s closest rival, Android, also has great numbers to show. But iPhone’s reach and penetration are unsurpassed. In fact, according to BGR, there is a user defection trend among Android users.

Nearly 18 percent of Android users have looked into the advantages of the iPhone and switched to the iOS platform. These advantages included the iPhone being one of the oldest smartphones. The way the iPhone managed to maintain its iron grip on users by offering consistent performance and innovation.

iPhone apps are known to be high quality and revenue generating.  Both startups and established brands are investing in iPhone app development to meet their business needs and make a quick return on their investment.

Let us look at some of the advantages of iPhone application development services and how iPad app development can expand business growth.

iPhone apps have a greater ROI than Android apps. A fact that adds on to the benefits of iOS App development, to a huge extent.

To get the best of the revenue generation opportunities from your iOS application development process, keeping an eye on the mistakes, tips and tricks, and other related information would be a big advantage. Refer to our mobile app development guide formulated from the experiences of our experts to get an idea of everything worth knowing 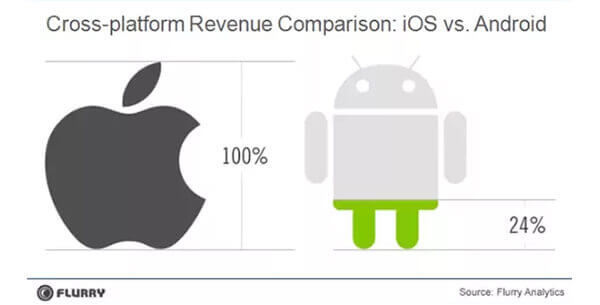 Intrusion into a business’s sensitive enterprise data lodged in apps is a big risk with Android apps.  on the other hand, when you compare the iPhone vs Android on the basis on security,  iPhone apps, protect firmware and software through stringent security measures such as :

iPhone users are cushioned against hacking and malware and this again counts under the advantages of iPhone over Android.

iPhone app development for business stays incomplete until the apps are built to pass the high-quality standards of Apple’s Play Store before they are made available to the market. When a user downloads an iPhone app, he can be assured of flawless performance and amazing experience. This trust and goodwill on Apple’s legacy have managed to garner a large and loyal consumer base for iPhone apps.

Android app developers dig into the open-source libraries and follow a non-standardized development approach. This results in apps that offer good user experience on some devices and less-than-satisfactory experience on others. iPhone users are welcomed by the same scintillating UX across all devices.

Plus, since the development of Android apps is slower, the cost of Android app development is much higher than that of iPhone development. Businesses are forced to outsource android projects to the lowest bidder who can deliver substandard products. This is the reason why Apple play store personally vets each and every app before publishing and releasing it to the market.

4. Apps for all business needs

Brands of all scales and sizes have recognized the advantages of having mobile apps for business. Consumers expect mobility and responsiveness from any business they deal with – something that comes attached with the process of iPhone app development for business. Mobile applications are the perfect gateway to reach consumers on the go and remain connected with them every moment.

iPhone apps, custom-built or off-the-shelf, are available to suit all business needs. Despite the fact that the cost of iPhone app development is somewhat higher than other options available, iPhone apps are found to be more lucrative for businesses due to their assured market reach and better-paying clients.

The established user base is the one Apple USP which is also one of the prime benefits of iOS application development. Apple is a pioneer in technology and applications. Although 75% of app users are Android users, Apple has a well-established niche of clients that swear by Apple’s quality and performance. In fact, it is said that once a smartphone user experiences iOS, they will never be satisfied by any other OS. Android apps have to battle stiff competition as there are too many apps crowding this segment. 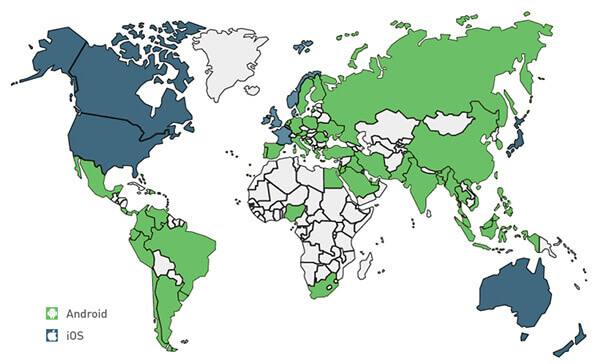 iPhone apps delight users with excellent user experience supported fully by the inherent capabilities of Apple’s iOS. Total cohesion between software and hardware amounts to a great performance of iPhone apps for business applications. To top it all, comprehensive customer support and maintenance results in improved satisfaction among users through an app’s lifecycle. Something that again adds to the advantages of preferring iOS app development.

iPhone users are found to be tech-savvy and open-minded towards innovation. This presents businesses with numerous opportunities to craft challenging applications that can create disruption in markets. Businesses that opt for iPhone business apps can become market leaders and stride ahead of competitors.

8. Low Fragmentation and Ease of Testing

Apple typically develops just one updation on its existing OS every year. Also, the number of Apple devices are lesser than Android-based ones. Hence, Android apps have to be tested comprehensively to work well on all the versions of Android OS. iPhone for businesses  just have to meet testing criteria of the prevalent iOS versions. This considerably reduces testing time and guarantees a quick time to market for iOS apps.

The Android market is seriously fragmented. Only 10.4% of Android users are using the latest OS version and the majority of users are still using three-year-old versions. This presents a grave problem to businesses. They have to spend in developing apps that are suited to all popular versions of the Android OS. Obviously, all this translates to a higher cost of app development.

Apple’s market is a consolidated one. Nearly 89.8% iPhone users are using iOS 12, the latest version of OS. This is a good chunk of a user base and practically viable for any business to reach. Something that triggers them to turn towards a reputed iOS app development company.

Apple has a huge presence in developed markets such as the US and UK. For a business to spread its wings and penetrate these markets, iOS apps can be a winning proposition. Apple’s legacy and quality are well-established enough to guarantee good success for your iOS apps for business. Google’s legacy in the app domain is zilch. Android apps have to struggle with millions of new apps released to the market. Even after investing heftly in top rated android app development companies, it’s highly uncertain if the app will make sufficient revenue to recover initial investment, let alone make any profit.

When it comes to how long does it take to build an app, iOS apps take nearly 28% less time than Android apps of the same specifications. This is because Android apps have to be tested across at least 20 devices with varying resolutions, screen sizes, and OS versions. Naturally,

Android app’s development cycle is longer and payment for development apps depend on the location like charge of android app development might differ from that of Texas, California, and so forth.

iPhone for businesses guarantee market visibility, profitability, and customer loyalty. This added to the low iPhone app development services time, low production costs and affordable maintenance, makes the mobile app development process very beneficial for the businesses. Businesses can piggyback on Apple’s legacy to secure a prominent place in the competitive app market. What more can you ask for!

iPhone for business use is best-known for offering stunning UI/UX that enhances user engagement for an app. It means that by opting for iOS app development you can attract more people to download your app. Apple users already enjoy the easy and enjoyable interface of iOS apps. These features can make the company’s app more desirable to use and boost up its sales. Moreover, iOS apps for business are scalable and grow as your business expands. Hence, it leads to better ROI.

iPhone application development offers a secure and safe environment for doing online transactions with the apps on the platform.  All the developed iOS apps for business come with advanced and secure features that safeguard the operating system against threats like hacking and phishing. Such apps ensure that every online transaction is totally encrypted.

1. What is the advantage of the iPhone over Android?

2. Is Android or iOS better?

iOS is a better option over Android in terms of developing an application because:-

3. What programming language is used for iPhone apps?

iOS applications are written in Swift or Objective C.

4. How much does it cost to develop an iPhone application?