How Much Does it Cost to Create TikTok Like Mobile App?

If there is one thing common between Uber, Facebook, and Snapchat it is the fact that they are losing on their active user count and engagement rate.

And the brand that they are losing out to is one that has become inescapable and a major revolution of the entertainment world – TikTok.

The multi-faceted immersive mobile app that is present on both Android and iOS has not just ruled out its dominance in the world of the millions and billions of users around the globe but also thousands of businesses that are marking their presence in the platform to enjoy the many perks that the app has to offer.

The intent of this article is to help you join the short-video creation and distribution revolution that has been initiated by TikTok by helping you understand what it takes to develop a TikTok mobile app. We will look into the technical and monetary side of the app and in the end, the cost of video creation app development which is entirely TikTok focused.

Before we go on with the article and look at factors like the top players in the industry, the funding rounds that have been held in the segment, the technical aspect of the app and the costing element the application, let us first give time to looking at how TikTok managed to become the top-grossing application of the world.

The international version of Chinese hit platform, Douyin, TikTok took very less time to enter and rule the mobile entertainment industry. The app which allows users to lip-sync dialogues and re-enact their favorite scenes from different movies and music videos has become a go-to entertainment hub for almost every teen and pre-teen in the world.

The app which has Artificial Intelligence powering its every single move has defeated a number of hot-shot businesses of the world with its engagement and revenue numbers. 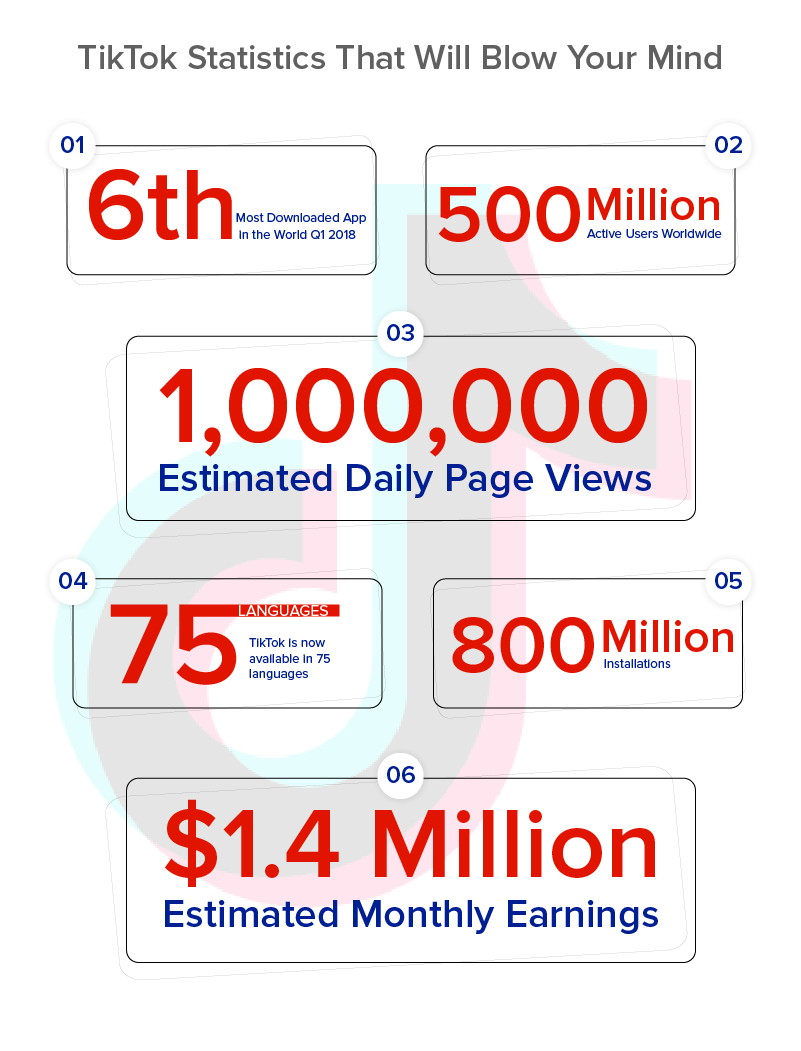 The latest TikTok statistics show a picture that TikTok has placed itself at the top of the market acquisition pyramid. Does it mean that a monopoly picture has been drawn in this specific entertainment sector?

Well, the answer is no.

TikTok, in spite of being the most installed and immersive of all the apps in the category, is not the only one that the users are following, there are a number of other similar apps in the domain that have been keeping the category up and running. 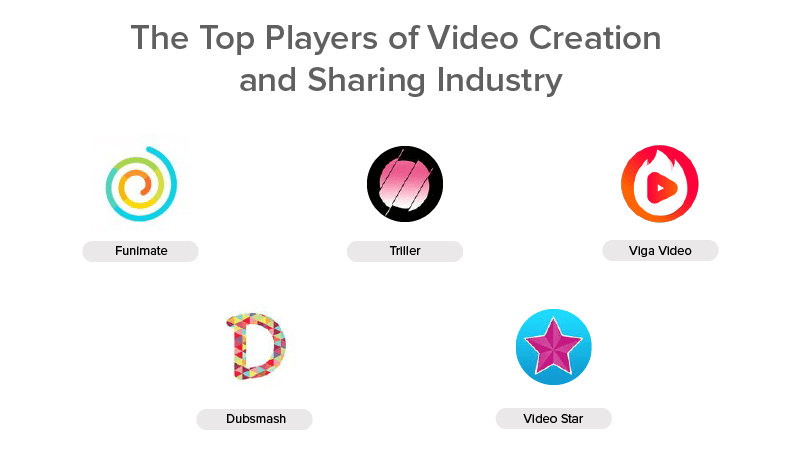 Also, the demand that the segment is seeing is something that has acted as a catalyst for other businesses, like yours, to enter the in-demand market segment. So, all in all, the list of TikTok competitors is not limited to just these names.

Fundings in the Segment

It is not just the market demand and emerging competitors count that has seen a rise ever since the TikTok app, earlier Musical.ly started witnessing a high demand from the world. There has been a sharp rise in the number of investors as well, who have shown their interest in putting their money into apps working around video creation and sharing.

Here are the three major funding rounds that hit the category between 2017 and now.

While these are just two high-level funding rounds that the app category has witnessed, there have been a number of other funding sessions in the segment as well.

One thing and probably the sole thing that has been driving the attention of both investors and end-users towards the interactive video creation and sharing platform is the set of features that it comes with.

Let us look into it next.

While on a high-level the main feature of TikTok like the application is the ability to make videos and share them on the platform for other users to view and react to it. The app gives users the facility to lip-sync either some movie dialogue or some song or even the voice of other users.

But when you deep-dive into it from a business front which is looking to enter the same entertainment space as TikTok app and others in the domain, there are a number of other features that you have to attend to in order to make the whole experience immersive and entertaining for the users.

For the context of this article, since you are just starting up in the industry, what we would recommend is making an MVP first that would contain all the must-have features that have to be present in your app as it hits the store and become the answer to How to Create an App like TikTok. The features that you read here are what would go into answering ‘How much does it cost to make an app like TikTok’

Let us look at what they are – 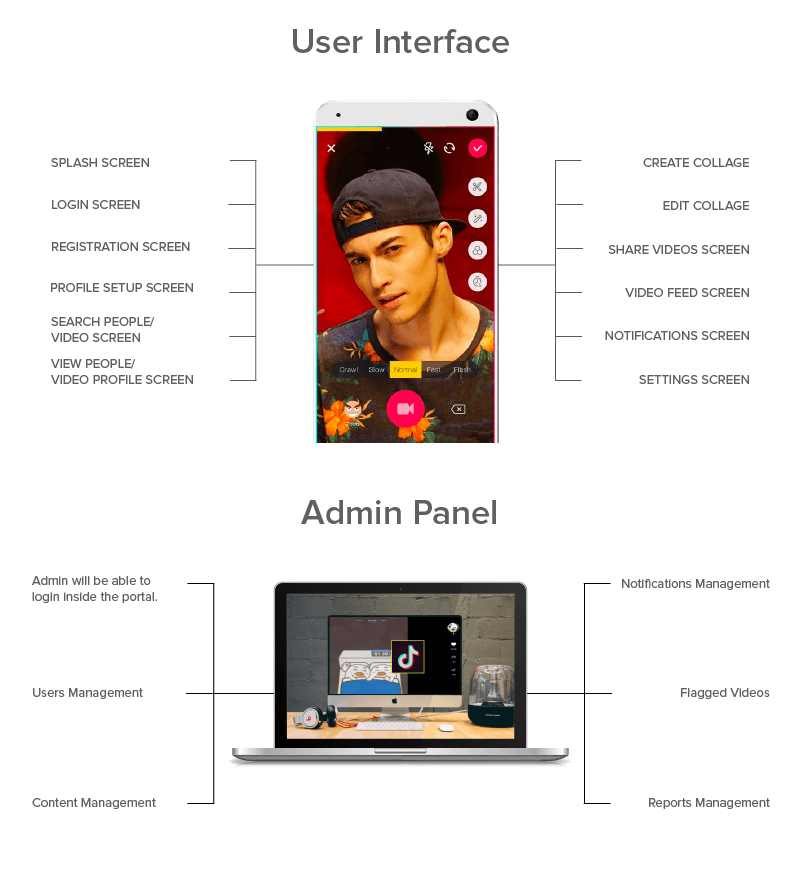 When you invest in TikTok app development, you don’t just invest in one application but two – User Side of the App and Admin Panel.

Let us look at the features which should be present in both the versions, individually that come together to answer how TikTok works.

The first and supposedly the most attractive screens of an app – Login screen is the one that you will have to pay the most attention to. At this stage, you should aim for having a small form to make users enter the app also they should be given the facility to log in through their social media account to save those extra, unnecessary steps.

Since the whole concept of TikTok like app runs around Videos, this has to be the one section that gets the maximum attention from both development and users front.
Here, you will have to give users the option to not just create and share their videos but also save them in the draft to be published on a later time.
The users are also given the facility to share their videos on social media.

The app should send over real-time notifications to the users with respect to followers’ addition, the likes, and shares activity that they make on your videos, and when people they follow make a new update on their profile.

Under the Settings section, users will be able to manage their profile, change their password, manage blocked users, work around the app settings, and contact the parent company in case of any dispute.

Admin side of the TikTok application will give the admins the facility of doing the following tasks – user management, content management, notification management, manage the flagged videos, and handle reports.

Now that we have seen one technical aspect – App Features let us attend to the other technical element that would help define the whole development process and ultimately the TikTok app cost – Technology Stack.

The Technology Stack we Base Our TikTok Application Development On

TikTok is one of the most innovative apps out there in the entertainment sector of mobile app development domain. The technology stack, in a scenario like this, has to be prepared to back this level of innovation and scalability.

Let us look at the Technology Stack that you can use to back your TikTok like application.

It has always been a very commonly searched question on the internet, which a number of users around the globe seek an answer to – ‘How do Brands like TikTok or Dubsmash earn money?’

So, next let’s look into the ways TikTok makes money and has managed to become one of the highest revenues generating brands of not just the entertainment industry but of the whole world, before we head on to revealing the cost to develop TikTok app.

While there are a number of ways video creation apps like TikTok can form their monetization model like Subscription and Influencer Promotion, etc. The models that TikTok uses to generate their Million worth revenue streams include –

TikTok gives the users the option to buy stickers and emoticons to react to live videos that get streamed on the platform.

The in-app purchases themselves have got the brand around 275 percent in users spending and approximately 3.75x year-over-year revenue, bringing the revenue count to over $3.5 million globally.

In-app Advertisement also proves to be a great monetization method for the TikTok app and others in the same category.

In order to place their advertisement on the platform which is visited by millions and millions of users on a daily basis, brands tend to shell out a huge amount of money.

If you too are fretting over your app’s Monetization model, what we would recommend is either going for either of the ones that TikTok follows or start a subscription-based model, wherein you lock a few features in the app in return of some amount or you can charge the influencers for getting a placement in the platform.

With this, we have seen all – the state of TikTok like apps, the demand they are able to garner from the world, the other major players in the industry, the set of features and technology stack that makes TikTok like apps what they are, and lastly the monetization model that they carry.

It is now time to get on to the most crucial part of it – How much would TikTok like App Cost?

Well, here’s the answer to it.

What is the Cost of TikTok Like App Development?

The TikTok app cost lies in the valuation of a number of factors – features, allocation of resources, and the technologies to use.

Assuming that you are going with the exact set of features that we mentioned above, the TikTok app cost when you look at the MVP of the TikTok like the app will come somewhere around $80,000 to $100,000.

While this is the absolute base amount, it will increase as you add more features in the application like Artificial Intelligence, High-End Animations or Blockchain for handling the in-app purchase segment of your application.

With this, you have seen all that is required to get started with the entertainment revolution and what is left now is getting started, which has just one step in between – Getting in touch with our social networking app development experts who will hand-hold through the process.

Our team recently worked on to create a musical video app like musically that was based on the idea of TikTok, which took around 6 months to finish the whole ideation to the development process and is set to hit the app markets very soon.

While there were some challenges associated with the creation of app like TikTok in line with AI integration that we faced initially, the learning and application curve was fairly low and we were able to overcome them in very little time.

Keeping the technical complexities aside, there were some business model issues that our clients were facing in terms of finding the right demographics, the promotion plan to follow to take the limelight away from TikTok, and the revenue model selection – Solutions to which lied with our Business Analysis Team, who would love to pass them on to you.