The craze to make money through mobile apps is inextricable. While some developers try different permutations & combinations, others have hit the jackpot overnight.

The craze to make money through mobile apps is inextricable. Whereas some developers try different permutations without any results to show for, others have hit the jackpot overnight. Having analyzed a bevy of such case studies over roundtables, and after-office coffee-talks, we have our list of the mobile app monetization trends of 2021. Building an app isn’t an easy task, but this technological era provides you with the opportunity to create a million dollar app if proper process and guidelines are followed.

As a luminary mobile app development company, Appinventiv has partners in every sector from healthcare to Edtech and other industries to obtain an engaging customer base and great ROI. We’ve seen first hand the most effective monetization tools for mobile apps, and with such validated expertise, look forward to empowering the entrepreneurs of new and old.

Why bother monetizing your app?

Before we dive into the reasoning behind monetizing an application, let us clarify one of the biggest confusions – can free apps make money? Yes, they can. Here’s how.

Apps have increased their user-reach multifold over the years. The below given chart appears to climb north in the foreseeable timeline as the internet and smartphones digitize our daily lives. By 2023, it is purported that apps would generate in excess of $935 billion in revenues, the primary drivers of which would be downloads and in-app advertisements.

When it comes to millennials, 21% of the cohort opens an app as much as 50 times a day. With an estimated 72.1 million millennials in the US alone, you do the math!.Before moving ahead, discover, how do apps make money using monetization models 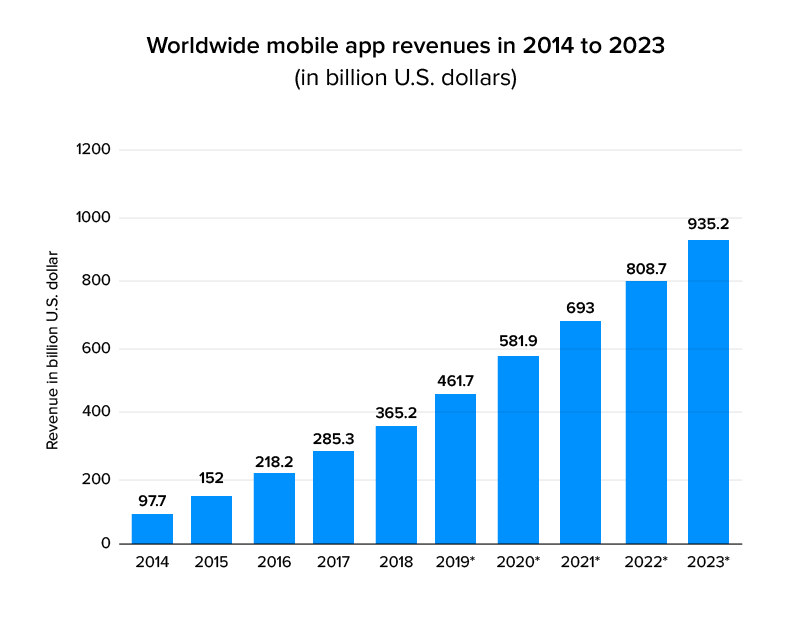 Having cultivated a regular footfall of app traffic and not knowing how to monetize it, would be like having a treasure chest without a key.

As the modern saying goes, money doesn’t grow on trees but is certainly minted in apps. Let us explore 8 impactful strategies and the reasons promulgating their adoption rate. However, as you digest these points, do note the factors that make up for a profitability-friendly application.

Data makes digital businesses tick. The public readily gives apps all the permissions to collect “relevant” data in return for premium experiences. Algorithmists decipher the variety and volume of the data they need on each user so as to peel the peripheral layers of behavioral psychology and augment tactics that urge the buying patterns. This can be observed from the fact that Facebook has 52,000 data points on each user.

Such intriguing insights were accessed by Cambridge Analytica by paying Facebook for unbridled data-access. Although the process of data-collection was questionable then, a legitimate market for data access has blossomed since making access to data, one of the hottest app monetization models.

When to use it  – to make a killing, your data must be BIG, literally. Big data is something that has volume, velocity and variety. The higher the number of data identifiers you collect, the more vendors you can sell it to.

You pay for the app before trying it out. This model is receding fast as people are reluctant to spend unless they trust the brand. Most often, mobile gamers partake in such apps that exercise a pay first, play later protocol. It is proven as a matter of fact that free apps are much easier to distribute than paid ones. So unless you are a billion-dollar organization with fever-pitch fanfare to try out your products, refrain from using it.

When to use it – if you have to use it, make sure the marketing budgets are tuned to perfection as the notion of paid apps takes hard-selling. Premium works best for brands that account for majority market share and can fend-off competition with a loyal base. 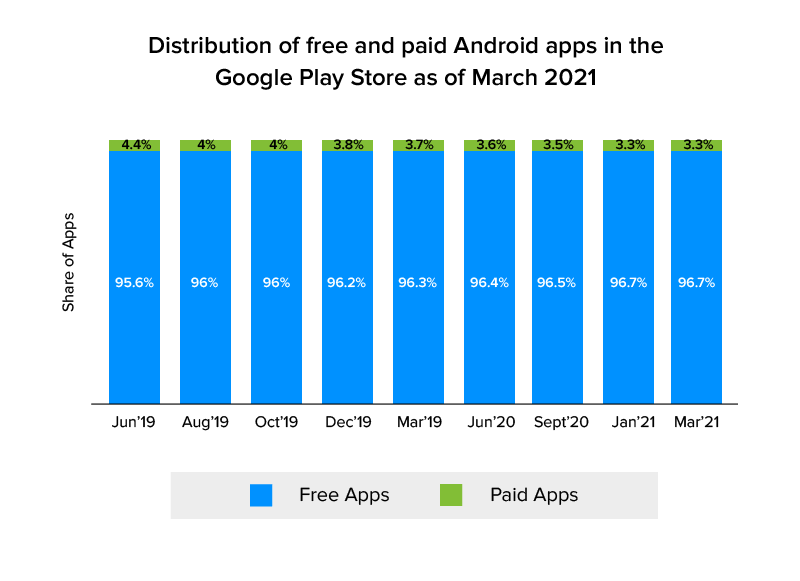 There was a time when in order to monetize mobile apps, 98% of the applications in the market stuck to this model. While that time was in 2014,thus in 2021 freemium apps still account for 94% of the market share emerging as one of the dominant go-to android app monetization strategies. The idea is to open up a basic in-app functionality to users so that they get a hang of it and automatically opt-in for premium features by paying a fee. Those wondering how to make revenue on apps, would be flattered to know that user acquisition costs are lower for freemium apps.

Freemium also provides the scope for incorporating secondary revenue mechanisms such as in-app advertising. In fact, mobile app developers use freemium as a hurdle for users to overcome and discarding-app ads.

When to use it – we recommend using freemium when you have potentially better app features that people will pay for. The model works best when app sessions can be stretched for longer durations. Spotify would be one example. 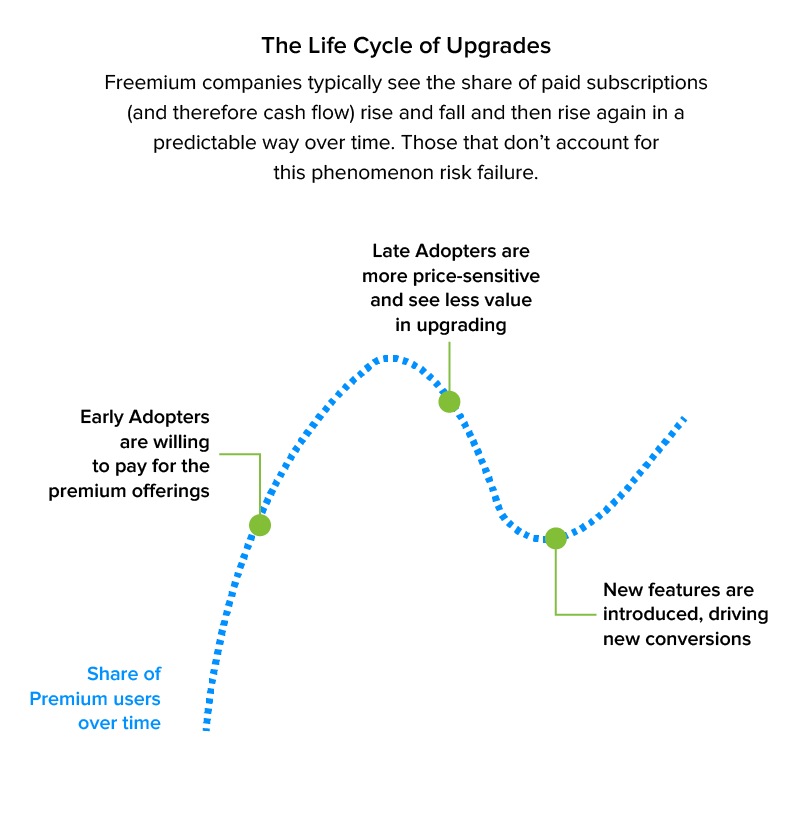 This is a one-word answer best suited to the question how to generate revenue from mobile apps? Usually, mobile app development services design a 3-tier subscription policy targeting users with the spending potential of basic, intermediate or advanced levels. Subscription plans can be classified over separate durations depending on their pricing. A subscription model gives first-time users the leeway to experiment and see for themselves the value proposition by paying a nominal fee.

Whether you discuss android app monetization strategies or the ones applicable to iOS platforms as well, this model has been used to monetize mobile apps far and wide. Documented evidence suggests businesses opting for the subscription services have grown consistently over the last few years. The only thing you need to know is how to choose the right app pricing strategy.

When to use it – This model is best-suited to content-heavy apps that tie users into a fallback loop and long-term app use. Examples include Medium, and Netflix. 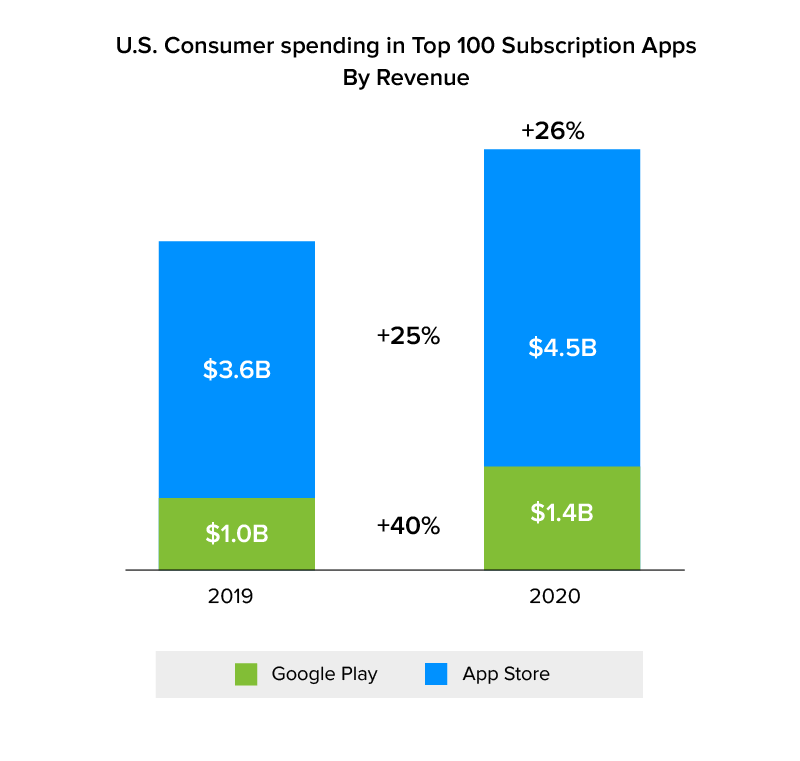 Partnerships can take many forms. Our experience as a mobile application development company spells a common theme wherein one app invites a second one to leverage the user base, reward them for using the app, and mutually benefit from higher user engagement. For instance, Domino’s could offer extra discounts for ordering food from Uber Eats the kind it doesn’t on other apps. Conventional wisdom advises that there has to be a shared user base for the sponsorship model to prosper.

When to Use it – It is mostly used by brands operating in the same domain.

Come to think of it, this is just a byproduct of the data an app collects. The same is used by ad networks, to drive relevant ad-traffic to the app as you open the gates to advertisements. In case you were wondering how to monetize android apps under a mobile app monetization strategy, you can find multiple options to charge advertisers on CTC (click through rate), CPC (cost per click), and lead conversions. There are a plethora of app monetization platforms that the advertisers leverage to funnel decent amounts of revenue. Such mobile app monetization platforms include the following:

In addition to them, you can run the following kind of ads on mobile apps:

They reward ad viewers for going through the complete duration of the ad with say an extra discount coupon. 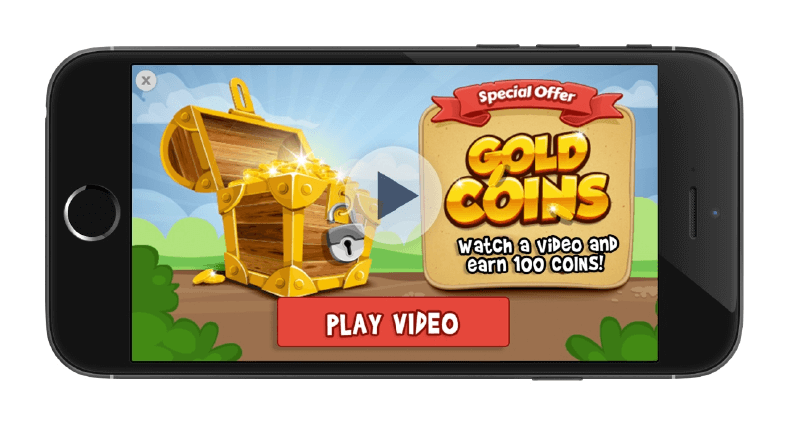 They appear horizontally either at the top or at the bottom of the screen. The thing with banners is that they can irk people by intervening with the content by sometimes overlapping it. 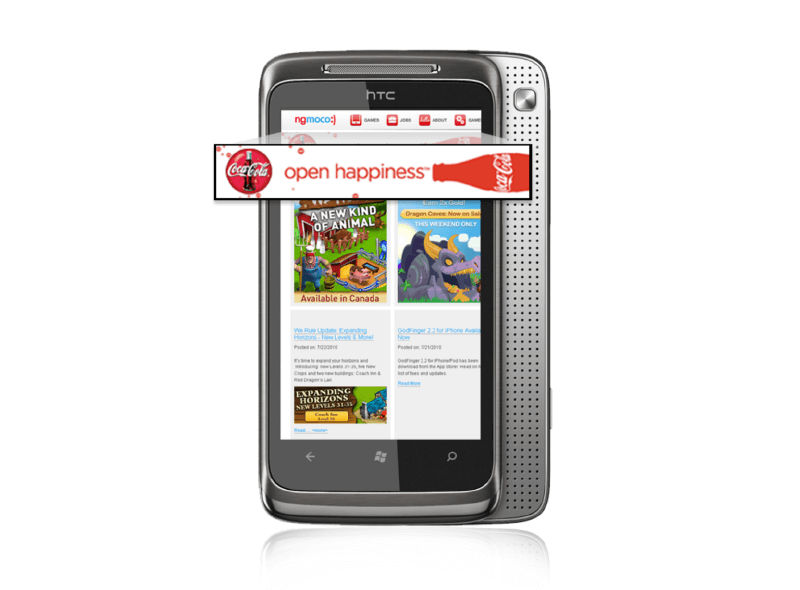 These are full-screen layovers and produce the best click through rates. Unless the designer screws up, there is little you can do to not get things right with interstitial ads. 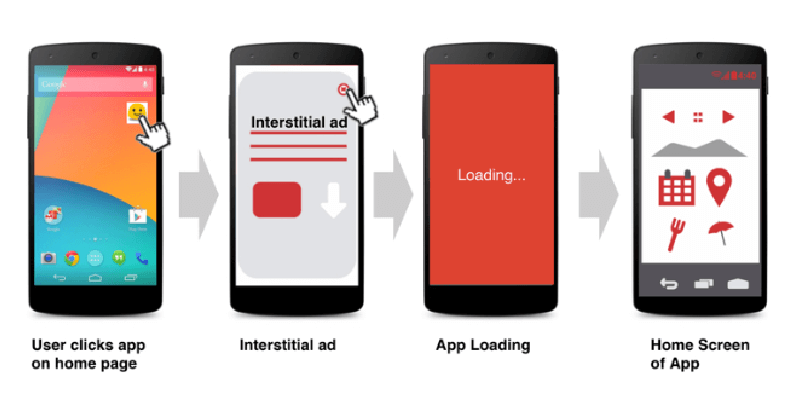 They appear as part of the overall content on the screen. It is hard for viewers to distinguish whether it is even an ad or not (hence the name) a fact that increases the likelihood of a click through. 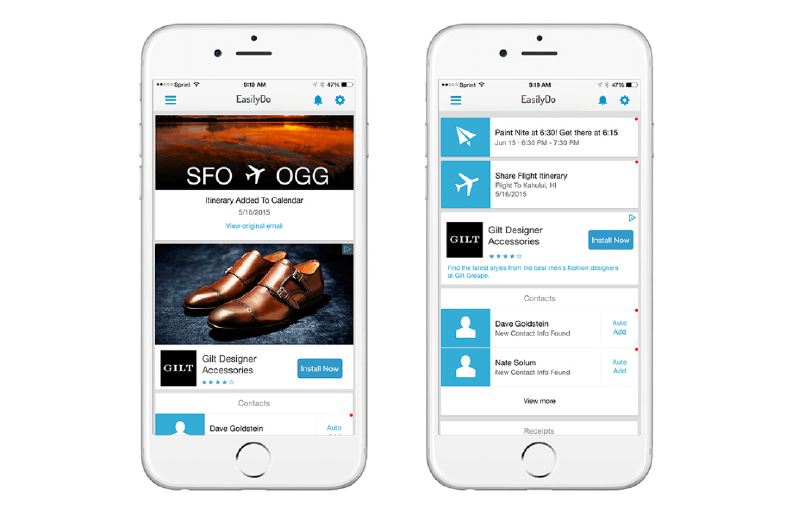 When to use it – Advertisements should be used when you have an abundance of user data such as demographics, search/purchase history etc.

Finally, in-app purchases are a tested and highly quantifiable revenue metric that app development services can play around with, while still keeping the app free to download. Users do not pay upfront but rather for add-ons that enhance and enlarge their in-app engagement. Few studies posits global revenues from in-app purchases at $71 billion for the year gone by. Popular types of in-app purchases implemented by gaming apps include the following:

When to use it – this monetization model was successfully experimented with by the gaming industry following which content driven apps have also taken to it. 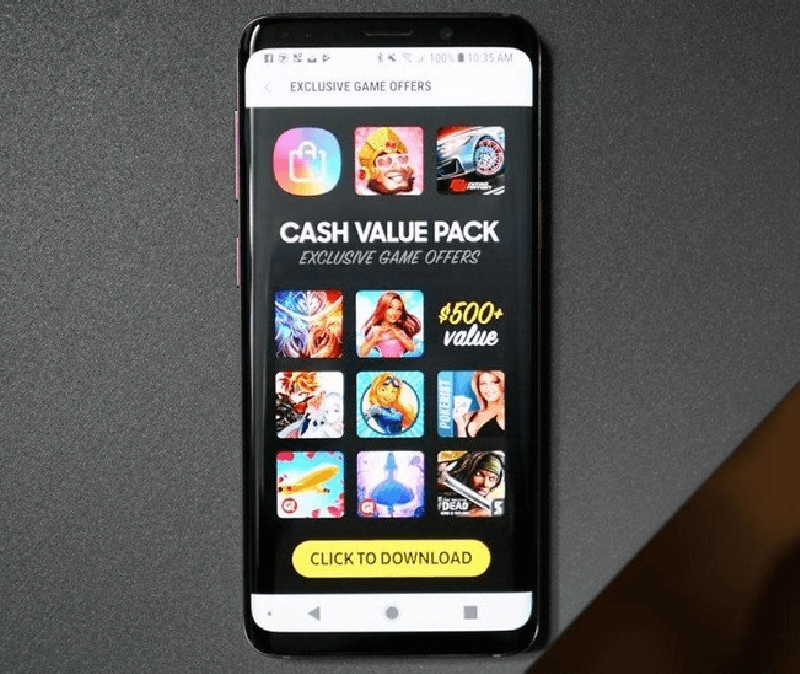 Which is the Perfect-Fit Monetization Model for Your App?

The answer is embroiled in further queries that pertain to intricacies of your business goals. For starters, consider finding a black and white answer to the following questions:

The next-big monetization model could be held in your outlook and your approach towards consumerism.

Mobile application development services like ours at Appinventiv have a record and reputation for conjuring innovation out of thin air. Well, that’s just an expression, but you get the point. Checkout our most hip-and-happening successes that earned us the laurels of being the best App Development Company of the Year.