What makes Python The Ultimate Choice For Startups in 2020?

Being in the market for over thirty years now, it is indubitable that Python has become the epitome of simplicity with effectiveness.

The gradual increase in its popularity is something that raises the question of “why and how Python is becoming the most popular programming language?”.

Upon confronting any developer on this matter, one would come across responses such as –  “It is highly readable”, “Building applications with Python is very easy because of the understandable code”, “It makes complex processes easy” and so on and on.

However, today we will discuss the validity and feasibility of Python application development from the business front, i.e., from the vantage point of startups and establish why Python is the top programming language for your startup in 2020.

What Does a Startup Need from a Language?

To effectively deduce why Python poses as an absolute option for startups to go with, we should first discuss what are the factors that are prominent for a startup business.

Now, when that is out of the way, we can positively move on to discussing whether Python actually fulfills all these demands and needs of a startup to emerge as an exemplary choice.

Unlike many programming languages out there, Python is pretty mellow when it comes to integration. You can easily integrate with other languages such as C, C++, Java, and so on.

Python is very popular for its test-driven development. As easy as it is for developers to create prototypes with it, they can later convert them into fully-functioning applications by simply refactoring the code and can test it instantly.

Though the list of why Python is quickly ascending the ladder of fame is tediously long, this is one of the primary reasons why. The easy availability of standard and robust libraries is what attracts developers and startups towards Python.

4. Ideal for ML and Big Data

Machine Learning and Big Data are two of the emerging technologies that have acquired eyeballs of many establishments globally. They both come blessed with tons of locked potential, something we are tapping into slowly. Among other kinds of applications written in Python, you can also develop apps integrated with these technologies including a wide range of AI technologies as well, as it has many robust libraries to support the development.

{Bonus: Spark vs Hadoop: Which Big Data Framework Will Elevate Your Business?}

Let’s have a look at the reasons for why to choose Python web development for small business.

Being a startup, time is of the essence for you. You need to unleash your app in the market targeting a certain niche before anyone else does it. Moreover, as a startup, you need to convince your investors that your app idea is something that is going to be a huge hit, and for that, you need to show them a working prototype of your soon-to-be-developed app, hence an MVP.

Now, one of the best uses of Python is MVP development because of its expeditious nature. Python encourages robust and rapid development by allowing the developers to do quick iterations after getting the feedback. It is the pre-built modules and packages of Python that render it the ability to expedite the product completion process.

In fact, it has been observed that Python in comparison to languages like Java can provide a fully functioning MVP is weeks as compared to months; it is time-efficient, something that every startup requires.

Scalability is one inevitable component that any startup cannot afford to overlook. As a business grows, its users grow too. Under such instances, it would become a priority for any business to have an application that has the scope of growth as the business grows. This is what Python is good for. With the help of the Django framework that is a series of wired-up and ready-to-go components, Python is able to provide highly scalable apps.

{Also read: Django Vs Ruby on Rails – Which Framework is Best for 2020}

The components in the Django framework are decoupled, i.e., independent from each other so they can be replaced and unplugged as per the demands of the business. Moreover, with the wide range of libraries available for Python, it is a piece of cake to add new features to a product.

To add another jewel to Python’s crown, it is simply versatile, with minimum efforts required. This means if you need a code that works phenomenally across all platforms such as Windows, macOS, or even Linux, then Python should be the language of your choice.

Additionally, if you need to integrate technologies like Machine Learning and Data Science, then you need nothing but Python as the programming language to help you achieve the app you envisioned but better.

“Beautiful is better than ugly.

Explicit is better than implicit.

Simple is better than complex.

Complex is better than complicated.

Flat is better than nested.

Sparse is better than dense.

As you can see in the extract of Zen of Python philosophy, Python language works of certain principles and guidelines that render it to be the most user-friendly language. This is one of the many reasons why developers love Python and have made it the second most popular language on Github beating even Java. In fact, there are over 146,702 developed so far using Python.

Community support becomes prominent when the team of developers faces problems during the product development process. Hiccups are unavoidable, but what matters is how active and capable is the community to provide possible solutions to certain issues that Python may face. Thankfully, the Python community is among the best ones out there as it strives towards curing all the issues the language may possess and improve its features and functions from time to time.

6. No need for extra developers

It is always good news for startups wherever they can save a few bucks. In comparison to other languages, Python offers a concise and rather easy code to developers, eliminating the need for big teams for the same task while delivering

the product of impeccable quality. Here, look at the example of the code in Java and Python which cater to the same function and purpose – 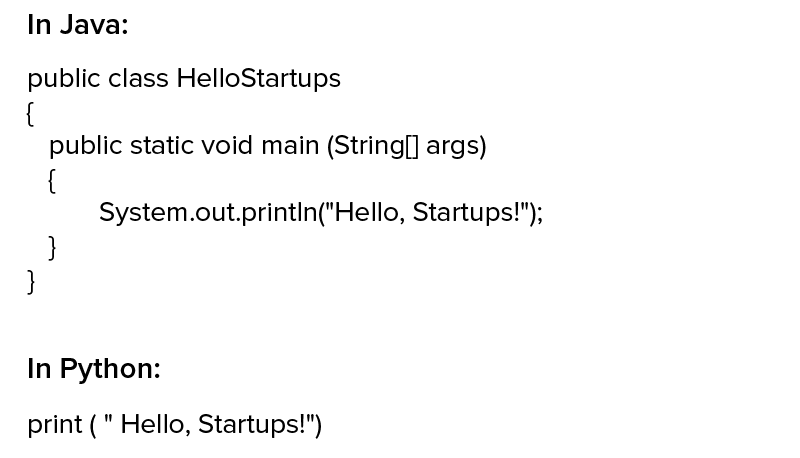 Speaking of security, Python is evidently secure than some other prominent languages, like PHP. It is because of frameworks such as Django that comes loaded with built-in security features protecting the application from many security threats lurking on the internet.

This framework is capable of hiding the site’s source code from direct viewing by dynamically producing web pages and employing templates sending data to web browsers.

{Read: PHP vs Python: Which Language Is Dominating The Market?}

As Python is very simple in nature and associates simplicity with effectiveness, it is a great medium to handle complexities. It is ideal for web solutions as it can overcome complexities related to the integration of different systems, among others. Qualities such as these are what together make Python ideal for startups as it is time-efficient, fast, and easy to work with. 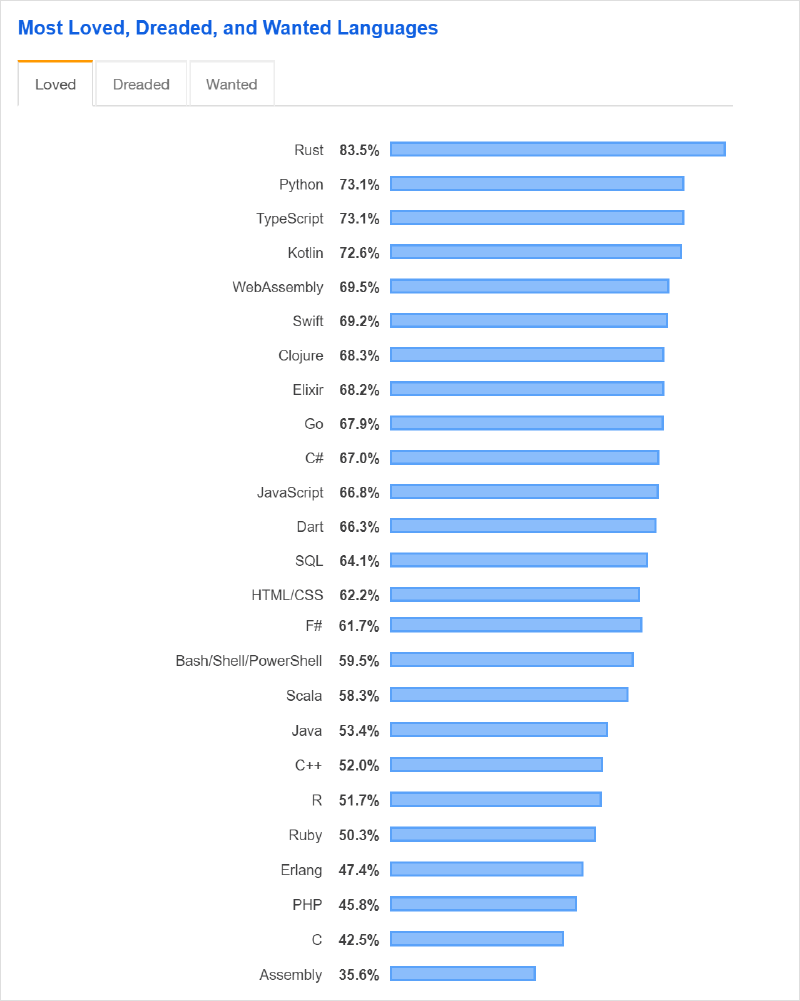 Do you know what makes sense? – Developing a solution that is based on ubiquitous technology. From Youtube to Dropbox to Reddit- all are avid users of Python language. It is something that is unprecedentedly proliferating as of now and will become a standard to which other languages will be assessed. So, if you want to develop an application that is going to perform just as remarkable as it would do in the present then there is nothing better than Python for you.

Look at the companies that opted for or are using python as their choice and are now thriving in their particular niche. These use cases of Python are an ideal example of why Python is Perfect for Startups.

In fact, besides startups, many fully grown organizations such as NASA, IBM, to name a few, are bending towards Python for their app development needs. Moreover, because of its ubiquity, it gains a little more edge over the other languages.

Q. Why your business should be using Python?

Python is an amazing choice for startups as it is great for developing MVP, it is very scalable, supports rapid development, is anti-complex, ubiquitous in nature, and so on.

Q. Which companies use Python programming?

Spotify, Netflix, Uber, Instagram, Pinterest  are Python-powered businesses that used it for development and are thriving remarkably. This is enough to get you insights into how popular Python is for startups and small businesses.