Made mainstream by Pandora in 2005, Music Streaming Apps only became mainstream with the launch of Spotify in 2008 and since then the online/offline music streaming market has seen no halt in terms of both user demand and the market revenue. 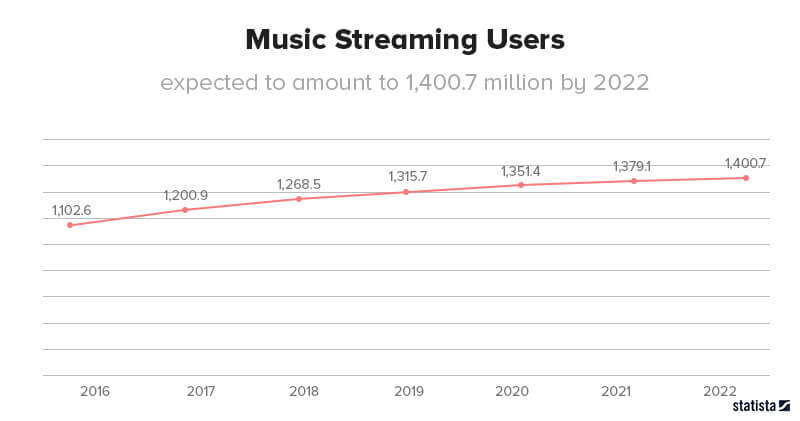 The upward graph is only a small representation of how big the market is. With popular music streaming apps like Spotify entering the Lite trend, the market occupancy can be expected to only grow further that its current rate.

Let us look at the market structure of the app category that is prevalent today and which also a validating look into the future of the music streaming app market.

Music Streaming app category has been playing a major contributory role in the app economy, with music apps becoming one of the top categories witnessing the most user engagement year on year. 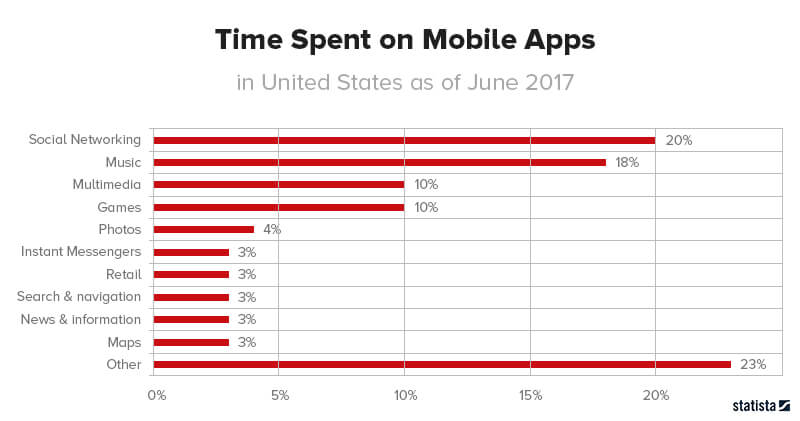 This high demand for music streaming apps which has been bringing the category in the list of most downloaded app categories repetitively has also resulted in a rise in the consumer spending in the app category.

According to App Annie’s report on global spend by stores’ users, it was estimated that the spending on Music category in Play Store was 120% while the iOS App Store music spending was 45%. 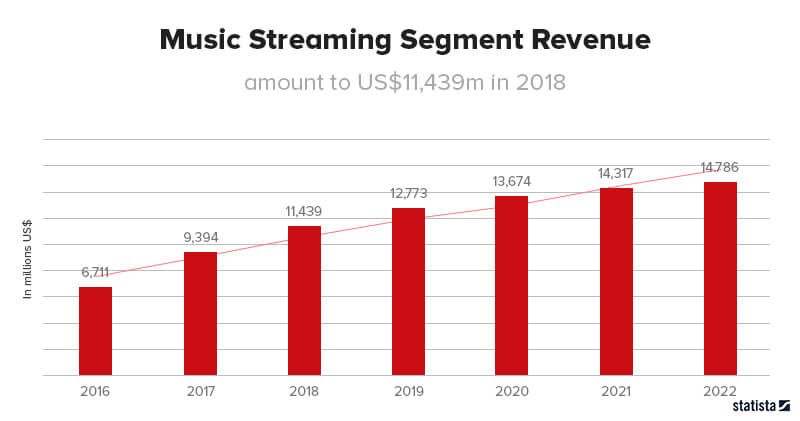 Statistics like these are a sign of how big the music streaming app category is now and how its future is also showing a similar picture.

With the app category download rates being on a rising tangent with the estimated revenue that a business can earn by investing in a music application development company has together brought in a rise in competition with brands aiming to join the trend.

Bonus Read- How Much Does a Podcast Application Development Costs

Seeing the rising growth in the demand for music streaming apps, a number of entrepreneurs are expanding their business to the category with the hope of getting a share of the market.

While we continue to witness new business entrant in the sector every passing day, here are the brands that have over time established themselves as the music streaming market industry leaders

There are a number of reasons that have brought in an increased demand for music streaming mobile apps among today’s millennial generation – the same which have motivated a number of businesses across the globe to expand their business in the music streaming industry.

Some of those user centric reasons are – The choice to listen whatever they want and whenever, the presence of a variety of options, the ease of discovering new artists and songs, and lastly to hear music minus any interruptions.

While these are the reasons that together have brought in a demand from the end users, the one reason that has enticed businesses to invest in the music streaming industry is the simplistic Tech Stack that backs the process that goes in to create a music streaming app like Spotify and Pandora.

The technical stack of the most popular music streaming apps are made of some of the easiest to learn technologies and frameworks.

Features of Music Streaming App and their Development Hours

An article which revolves around the development of music streaming app services would be left incomplete without the mention of features that should be present in the mobile app.

*Bonus*: We have also added the hours that it would take to develop the individual app features, which would ultimately help you get a cost estimates that you should expect as a quote from a music streaming app development company. 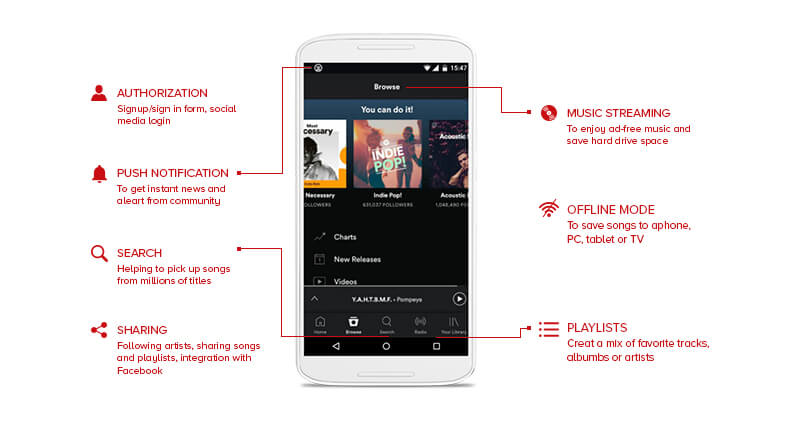 Inclusion of a registration feature would depend entirely on your business model. While you can opt for giving your users a free, open service, which won’t call for asking your app’s listeners to log in with their credential, more often than not, businesses follow a freemium model.

And for a freemium model to function, it is important to get sign-ins from the users in order to convert them from free users to premium ones.

The whole idea of a music streaming application is to give the listeners the freedom to search for their kind of music which is set according to their mood. To make this possible, it is important for the businesses to add in Search feature in their app.

Through this feature, users should be able to search for their favorite singer, albums, movie tracks, etc.

Adding a Search functionality in the music streaming app services would take somewhere around 110 – 140 hours.

What is better than partnering with your mobile app development company and giving your listeners a platform where they can save all their favorite tracks in one place, categorized according to their mood.

This is where a Playlist feature comes into the picture.

The saying that the success your app gets is a directly related to the promotion that it gets on social media stands true for music streaming apps as well. By giving your listeners an option to share their favorite song or the whole album on social media or with someone on a more one-on-one mode like WhatsApp or Instagram Direct Messages, your brand will only get a good share of the mouth of word advertising.

It takes music app development company approximately 65 to 70 hours to add in the social sharing option in the mobile app.

Through this feature, you give your listeners the option to hears songs on the go without any dependency on the internet connection. Offline mode makes use of the device’s local storage to cache audio data of the song.

Development of Offline Mode takes somewhere around 60 to 70 hours.

Now that we have looked into the present and future market scenario of the music streaming apps and the features that should be present in your Spotify like app along with the development hours that would go behind the creation of each, we have come to the last and most anticipated section of the article – Cost of Music Streaming App Development like Spotify.

[Extra: To know the exact cost estimate, head on to our guide on – How much does it cost to develop and maintain a mobile app]

The answer to ‘How much does it cost to make a music app like Spotify or SoundCloud’ can be found in the analysis of a number of factors like the features that it will be included in the music streaming applications, the platforms on which it would be launched, and in the end the area where your music streaming app development company belongs to.

All of these factors are then divided into hours which are allocated to the development of every individual app feature – all of which are then used to give a cost estimate of the complete development of music streaming app services.