How CI/CD saves up to 20% of mobile app development time?

Continuous Integration and Continuous Delivery has grown to become a software development practice which brings down not just the effort but also the app development cost that goes behind.

Through the CI/CD for mobile apps process, businesses are avail a plethora of benefits, straight from the one time setup: Automated builds, improved communication, automated shipping, and zero server maintenance.

In a sans CI/CD world, some mobile app development companies release their apps manually, by handing them off from one team to the next.

There is almost always a delay at every stage which leads to irritated teams and unhappy clients. And the app ultimately gets live via a tedious and error-full process which delays the entire revenue generation possibilities.

Now if you look at the continuous delivery pipeline illustration below, you will get a different picture.

It depicts how the developers write their code and commit them to a source code repository once/multiple times a day. Following which, testing, staging, and production happens inside the CI pipeline and is deployed to the customers directly.

What is CI and CD?

Now before we go on with defining what the approach stands for, let us put something out in the open.

Even though there are a whole lot of different mobile app development process sets operating in the market today, the answer to what is Continuous Integration and Continuous Delivery in devops and what is CI and CD in agile would be exactly the same.

With that clear, let’s head out with the explanation. 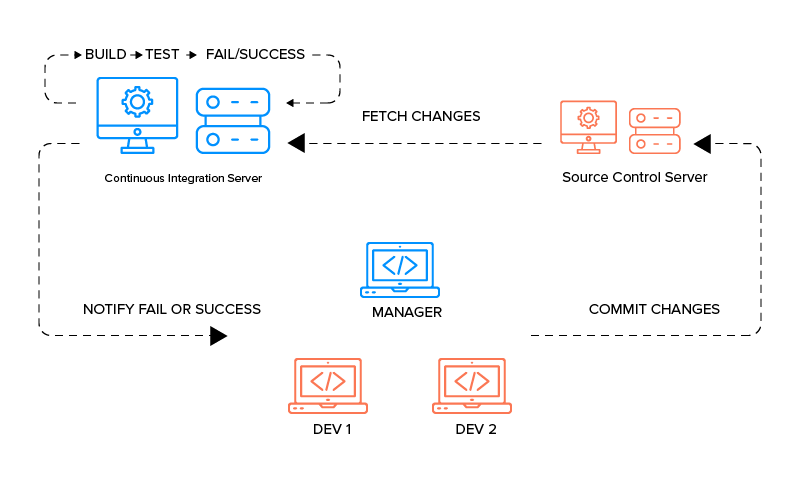 Custom Integration or CI is the custom mobile app development practice where regular integration of code changes happen in a shared code repository. Usually, the practice happens at least once and maximum of multiple times in a day. This encourages committing of small changes often compared to committing of large changes less frequently.

Every commit then triggers a build in which tests are run which helps in identifying if something is broken.

It is all about the capability to regularly deliver the integrated code to production. The end result of this stage is that you have green builds that are ready to be released in one click.

This process goes one step ahead for it enables automatic deployment of every main branch change which passes the CI pipeline. However, it is better to avoid doing this, for you would need to perform testing which are not limited to automated.

The process of integrating CI/CD for mobile apps can be divided into seven sections or stages.

Code: Code is the backbone of any application. The process of writing them which starts with the development phase goes on to the maintenance phase. In the continuous integration and delivery approach, developers write code for CI components, which in turn, prepares it for automation in the next stages.

Build: This is the part where the app is built. Multiple developers work on the process happens every day. What is different in case of CI/CD for mobile apps is that once the developers have finished their work, they add them in the CI application.

The output of the stage is a URL.

Test: Once the code components are entered in the CI platform, the next step is to see how the app performs with inclusion of new updates. The CI software here gives developers reports on how the app is performing, in addition to some useful analytics.

Even though it is automated, it helps to involve someone from the mobile app quality assurance team in the stage to ensure that the changes are acceptable.

Package: Once the performance and quality tests are made, it is time to deploy the application. The stage is applicable both for the new apps and the existing apps whose new version is going to be released.

Release: The next stage of the incorporation of CI/CD for mobile apps is applying the new URL for the app on devices for release.

Configuration: The next stage is configuration of the infrastructure. You would need to format the entire coding and management tools, which would enable people to regularly access the CI platform.

Monitor: Once the app is running, you would still need to continue monitoring its performance. The developers, at this stage, ensure that any additional code written for improving the app has gone through the CI stages first. Doing this, lowers the chance of any bugs or problems emerging mid way.

Getting started with Continuous Integration and Delivery

It is not difficult to get up and running with Continuous Integration. Here are the steps that mobile app development companies generally follow to start using CI/CD for mobile apps smoothly.

How to Implement Continuous Delivery for Mobile App

Let’s look deeper into what the implementation of continuous integration can offer to the everyday software development process. The realization of these advantages and the answer to how continuous integration and delivery helps translates into reduction of risks attached with building and paving the road to get the features out to the customers.

In application development process, not knowing can really hurt. One of the primal things that slows down the software development process is the lack of feedback on the impact of changes and the quality of work. It is easy to get disillusioned that you are moving too fast if you are commiting codes frequently and moving to other tasks without running any tests. While the reality is that it’ll get extremely difficult to figure out what changed in the code and by whom, when there is an issue.

CI/CD for mobile apps solves these issues by giving you prompt answers on the question if something broke in a commit.

When the CI/CD pipeline has been set up, the whole team would know what is going on with the builds in addition to getting the latest test results. This means, they would be able to plan their work in context and would get a clear idea of which changes tend to break the builds more often.

If you look at software as legos where each of the pieces are created by developers individually, the whole software development picture becomes one where different legos meet to become one giant piece. What eases this process is the lack of friction.

Even if a lego piece is fine, you will still have to make sure that it fits well with the entire system – Continuous integration does exactly that by connecting the pieces of software together everyday.

4. Identification & solving  of issues early on

An obvious phase of software development is bugs. Now, the more bugs pile on, the harder it then gets to identify and solve them. With different kinds of automated tests running in the continuous integration pipeline, you’d get to know what is to be fixed the moment a test fails.

The easier it would be to test something, the more convenient it would become to test the quality. The simple rule is that the more your code is written in a way that it can’t accommodate writing tests, the more difficult it would be to make it bug free. The testability efforts ultimately depends on how easily the new builds are made available and the kind of tools you work with, plus the control you have on the test environments. 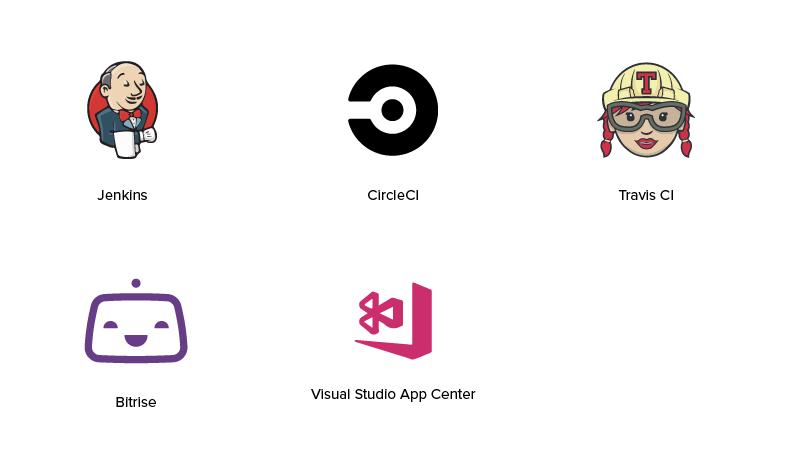 Founded in 2006, it is the top open-source continuous integration server. Developers have developed over 300 plugins for adapting Jenkins into different build, test, and automation based workloads.

The tool enables developers to release codes by automating the build, test and deployment process. It allows them to identify and fix bugs much before it reaches the customers.

It is another top mobile continuous integration tool operating in the market today. It is a distributed, hosted services used in the development and testing of projects which are hosted on GitHub. It also offers custom deployment of proprietary version on the client’s hardware.

It is a continuous integration & delivery Platform as a Service which focuses on mobile app development. The developers, through the tool, are easily able to automate the test and deploy phase of their apps within a few clicks.

The Microsoft backed tool brings different services, usually brought into use by developers in an individual, integrated product. It enables mobile app developers to build, test, and deliver, monitor their apps, while allowing them to create an installable app package with every push made to the repository.

While these are just five, there are a plethora of different continuous integration and delivery service providers available in the market. Here are a few things to consider when researching the choices:

How to select the best CI/CD tool for your app development needs?

On the basis of context, there can be instances where open source tools might be off the table for some clients. But at the same time, investing in proprietary tool can be a little costly side.

If going with open source tools fits in the context and budget, there are a number of options present in the market.

2. In the Cloud or Self-hosted

If you are willing to host the CI/CD service yourself and have the time and resources for setting it up, configuring, and maintaining it, you should go with Self-hosted services. But, if you are looking for crossing off build infrastructure maintenance off the work list, go with a Software as a Service solution.

3. Ease of setting up

A frictionless adoption of CI/CD is the secret to getting everybody on board. So, going with a tool that takes a lot of time in setting up can backfire your intention of choosing the approach.