Gone are the days when developers had to sweat double in order to create an app for app development platforms. Now, creating an app with one-time coding is possible, thanks to cross platform app development frameworks.

The best cross platform app development includes creation of mobile applications in a way that they can be run on various platforms. In this type of development, programming is done only once in a manner that the app is supported by Android, iOS or Windows. Cross platform development has become popular because of its features and tools which are loved by developers.

Developers are always looking for something new and improved to make app development a time saving and efficient process. This constant improvement in technology gave birth to Flutter. 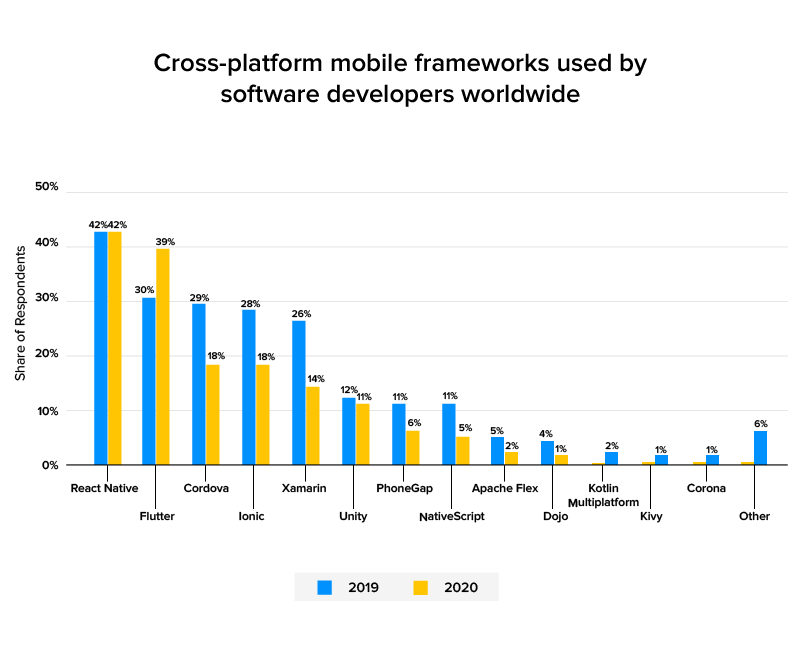 Apps built with Flutter can be run on Android, iOS and Google Fuchsia which is another app development platform developed by Google. However, a debate of Flutter vs React Native is always going on among developers since the time it launched.

Flutter is being used by developers for its proficiency and efficaciousness. The developers at Google had been working rigorously on this before general use. Here are the things they worked on:

What is Flutter Good for?

Ever since Flutter has become famous, this question has been making rounds. Before deciding to build a Flutter mobile application, people want to know which type of development it supports and does not support. Flutter is not the choice for you if you are developing:

Developing an app with Flutter

We did reveal the real Google strategy behind Flutter in our previous blog. Moreover, Flutter has been around long enough to provide the impeccable user experience. The exponential popularity of flutter for cross platform encouraged developers to build apps with this framework.  Now, there is a sea of flutter cross platform apps out there, served with proficient flutter app development services.

Some IoT banking use cases of flutter include apps developed by Google- Adwords app which tracks the advertising reach and buys Alibaba app by Alibaba Group, a Chinese e-commerce company. Another examples are Watermaniac, Hookle, Coach Yourself, Reflectly, and many more.

From an app owner’s view, developing an app with Flutter is fast and less costly. There are other advantages of using Flutter for app development which are discussed below:

There are numerous features in Flutter that simplifies the development process for engineers, upon relying on the experience of Flutter-based tasks, some of the important features are provided below:

Flutter’s principles depend on the reactive programming that guesses streams. This architecture pattern is called BLoC (Business Logic Components). This architecture permits separation of the application’s UI from the business logic by utilizing streams.

The fundamental value of BLoC design is its reactivity, and freedom of UI from data. In comparison to other architectural patterns, where UI might be stacked with delays, the BLoC design prevents delays in the application’s performance by using organized, async techniques, and streams. It implies that animations and screen scrolls will work easily, while data is stacked from the server.

We have been utilizing BLoC pattern architecture for years now. It is the best fit for applications with complex architecture and a lot of information. In a case where the app’s architecture is simple, additionally the Provider design is utilized that simplifies resource allocation and increases scalability for classes.

The measure of settled objects in Flutter code doesn’t impact the last presentation and responsiveness. This is because there are no recursive calls when preparing the layout.

For example: if there are a lot of gadgets accumulated in the native app – it probably influences the application’s performance. In any case, with Flutter, it is feasible to carry out UI/UX plans of any complexity, stylization, and onboard plenty of widgets.

Flutter supports multithreading, where threads are known as Isolates. When beginning to code in Dart, only a single essential Isolate is referred to as the UI Thread. It is the correct answer for long-running undertakings that ought to be processed alongside the smooth running of the entire application.

Since Flutter uses Dart programming language, mobile developers generally utilize the DartPub as a package supervisor since it contains numerous reusable packages and libraries. While picking any plugin module, one can see both its popularity and the code’s health and maintenance. It is significant when creating custom highlights – it’s not as imperative to pick modules by the notoriety rate as to see that the code is in effect constantly refreshed and checked. The actual module may not be that well known, however in the event that you have some novel programming highlights, it is feasible to pick it relying upon the code’s wellbeing.

The Flutter 1.17 release has lots of improvements and it has resolved an unprecedented number of issues since its last release. This enormous number of enhancements is the consequence of coordinated effort with Nevercode, an incredible nonstop mix and constant development tool that helps any Flutter application developer to effectively discover and resolve issues.

With each year, a number of issues are resolved than opened, and this permits the Flutter group to end up with less issues left. The greater part of the issues have been settled with the assistance of 3,164 pull requests from 231 contributors.

Flutter utilizes widgets as its core element just like other progressive languages. Widgets permit developers to perceive how they’re doing with their code very quickly and save heaps of time on creating fundamental UI elements for each screen and resolution.

This is the thing that makes Flutter advantageous for developers, wherein they simply need to develop a UI element once and it will automatically adjust for any screen. This likewise saves time for QA professionals, as they don’t have to test the Flutter mobile app design on all devices with various screen sizes. 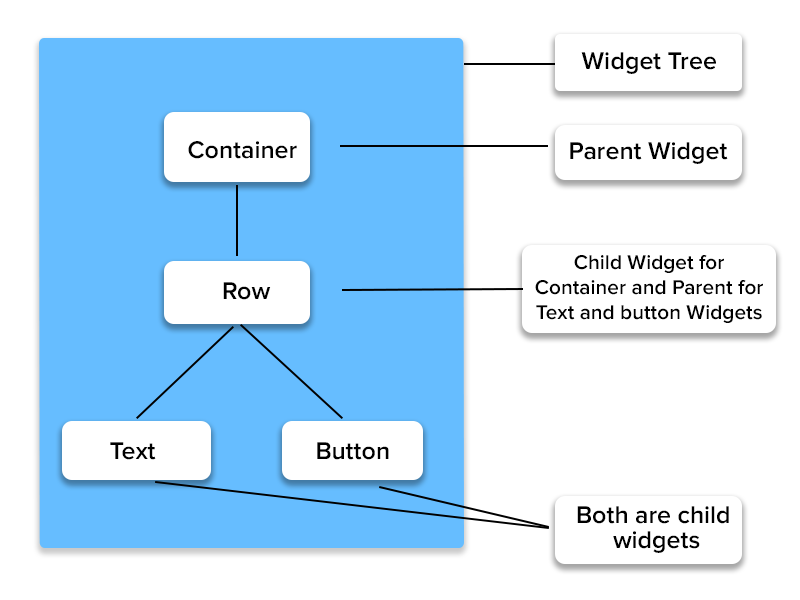 Presently, developers can see their app’s lifecycle in Stateful widgets. They can likewise utilize extra widgets like OrientationBuilder, which tracks changes in screen direction and so on.

How Much Does it Cost to Build a Flutter Mobile Application?

It takes 50% less time to build an app with Flutter as compared to building apps separately for Android and iOS. According to the mobile app development guide on how much does an app development cost that we wrote recently, the cost of an app depends on the hours it takes to build it. To build an app with Flutter that works both on iOS and Android, it takes about 250 hours. On the other hand, it takes 400 hours to build the same app for iOS and 250 hours for Android.

To determine the flutter mobile app development cost, just multiply the hours taken to build the app with the hourly charge of an app developer. A Flutter app development company, however, has its own price range for its flutter application development services. It usually ranges between $15,000 to $40,000.

It is seen that the hours taken for Flutter app development is low hence it will save money. So if you want to save money and built an app in less time then Flutter is a great choice.

What is the Future of Flutter?

Often a compromise is made between quality and productivity while developing separate apps for iOS and Android. But Google decided to remove this issue and introduced Flutter as a cross-platform development tool.

Flutter has just entered the app development industry and has already seen a lot of fame. The future seems to be bright for Flutter. Google also launched Flutter 1.7 with added new features and functions such as Rangeslider, 64-bit support, typography features, game controller support and so on. There is no denying that it is certainly more powerful than the previous Flutter 1.5 and 1.6 versions. Flutter has a lot of potential in the industry and if it is able to bridge the gap between quality and productivity then it sure is going to take over the app development world.

Flutter app development platform is still in the development phase which can be a risk but it shouldn’t take Google long to launch a stable version of the framework. Flutter has an official website where you can find all about Flutter.

The very first step in the process of making a flutter app for your business model is to hire the best flutter app development company, which has the experience in this field and is trustworthy. Moreover, you need to make sure to calculate flutter Mobile app development cost before taking any solid decision.

2. How do you make cross-platform apps?

With the growing technology, many cross-platform mobile app development tools have also emerged to facilitate the whole development process. Software and mobile application development kit, such as Flutter, is the most effective way to develop a remarkable mobile app.

3. What programming language does flutter use?

Flutter uses the Dart programming language to create rudimentary codes and essentially the base for any cross-platform app.

4. Which framework can be used to develop cross-platform applications?

From the myriad of frameworks, the best ones to use for cross-platform development are Xamarin, React Native, and Phonegap.