Wearables have been a part of our life and an important digital transformation for many years now. In the 1980s when the first digital hearing aids were first released, we couldn’t have imagined it to today become an inherent part of our lives. In the present day scenario as well, AI in fitness industry is enabling smarter workouts without gyming equipment with the incorporation of AI wearables which help personalize your fitness goals.

Back from 2004, which was dubbed as the year of wearable technology when there was a sudden rise in activity trackers once Apple Watch was introduced, the innovations that have been happening in the Wearable sector are no less than complete transformations.

But some time between today when you are reading this article and a few years ago, there was a time when wearable devices started losing their charm – mostly because of the fact that people got bored with tracking their counts or getting phone call notifications on their smart watch. This was the time when the talks of making wearables smarter started doing rounds.

Cut to today, the preparation of making applications of wearable technology intelligent so that the value the users get at the back of every interaction is comprehensive is on a high. This preparation has been given the name of Wearable AI. As you can infer, the sector is what has emerged out of the incorporation of Artificial Intelligence and Wearable tech in the world.

In fact, the fitness industry is witnessing a tremendous shift as a result of widespread adoption of Internet of Things (IoT) applications and cutting-edge artificial intelligence (AI) product offerings. According to Reports and Data, the fitness app market would generate $14.64 billion in yearly revenue by 2027, with roughly 100.2 million fitness app users.

With that proved, let’s see what the disruptive technology holds for customers.

The problem in wearable technology that would need an AI technologies solution is two-fold.

On one side, there is a problem that users face in terms of lack of an action item. Imagine this, suppose your smart watch notifies you that you have walked 300 steps in a day. Now what would you like to do with the information? Don’t you want to know what the ideal step counts? Or need a comparison with the previous day’s step count? Or simply need information around how steps lead to your fitness goal, how many more steps would you need to meet your goal?

Now on the other side, there is a ‘what is the next step problem’ with the wearable service providers. When built simply on the idea of fetching information from the body and notifying the vitals to the users, there comes a time when users start asking the value proposition (although, the instance almost never comes in case of medical wearable apps which are devised to track vitals). What is difficult for service providers is to think about the expansion model – another one of the wearable challenges that fitness AI solves.

AI technologies, at the back of their powerful armour, Machine Learning, does an amazing job at converting the plethora of data that the users give you into actionable intelligence. It helps your users and your business with the next steps. In fact, an artificial intelligence smartwatch is creating a benchmark in enabling real-time monitoring of one’s fitness and health goals.

Let us look into some statistics throwing light at the rise of fitness AI and Wearables convergence. 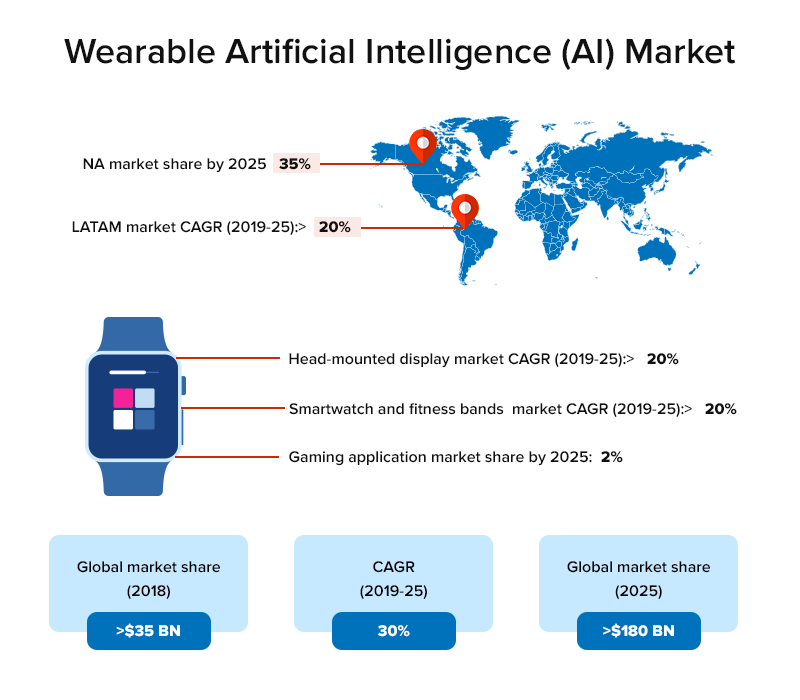 Use Cases of AI in Wearable Technology

The use cases of artificial intelligence in wearable device is presently divided into two main categories: Healthcare & Safety, Enhancing AR/VR, and Intelligent Assistants.

The role of VR and Wearable in the Healthcare domain is already extremely prevalent in the market. The need, however, is to make them intelligent.

The first and most uprising use cases of wearable AI is seen in their incorporation in the AR/VR segment. The mixed reality devices which use a blend of augmented and virtual reality can be enhanced greatly through AI technologies incorporation in the wearable industry. The present mixed reality headsets have to be connected to either a powerful PC or smartphones to work. But their performance however is dependent on the processor’s power.

AI can lower down the wearable workload by adjusting the performance of the headset to what the users require at the moment. Through an interaction with the user and their environment, the intelligent machines are able to understand their preferences, the information that has to be displayed, and lower the latency which is experienced with a mixed reality.

Example: In HoloLens 2, Microsoft has announced to incorporate a dedicated AI core processor for providing users with an expansive experience. The time to come will see more AI wearable devices emerging in the gaming industry.

With applications in wearable technology being on the rise, artificial intelligence devices are becoming true assistants and thus improving the customer experience. The use case of AI Analytics in Wearable is fairly evident in the sports world where the gadgets and advanced sensors are embedded in the smart apparel and provide the users with real-time notification of their metrics in addition to actionable advice for improving performance and insights for lowering the injuries risk. A justifiable example of this is an artificial intelligence smartwatch.

Other than the sports industry, it is also seen in case of event and travel use cases, where the users are notified of their flight timings or movie schedule.

Example: When we talk about the companies using wearable technology and fitness AI combination, both Google and Apple offer the functionality of syncing their assistant services: Google Assistant and Siri with their Watch, EarPods and other wearables.

Challenges Associated With the Incorporation of AI in Wearable Technology

Battery life: During development and evaluation of wearable fitness devices, one of the key challenge areas for us in the entire AI project management cycle was managing the battery life. Since the computational power of AI wearables is a lot less compared to smartphones, the batteries tend to run out much sooner than ideal. Two approaches that we followed to counter this in our wearable technology development process was A. we processed only the data that we needed through edge computing and B. we optimized our code in a way that would support minimal usage.

Privacy: A successful implementation of Artificial Intelligence Wearables calls for a lot of data. In this scenario, it is very important to keep privacy as the top priority. All throughout the development process we had to keep ourselves asking if at all we needed to collect certain information. The next important thing was to compute the derived data on the fly. All these measures tend to increase the wearable app development services cost to a great extent, something that can be worrisome for the startup entrepreneurs.

Security: There are some security–sensitive AIs like the ones that make use of wearable cameras for facial recognition. For such devices, it has been our priority to make use of on-device data processing in our wearable app development processes. The usage of edge computing saves the need to transmit data through the public or private cloud services. This avoidance offers a high level of privacy. But in instances where transmission of the data is necessary, we follow ways to encrypt the data to their entirety.

In short, wearable devices that are powered by artificial intelligence technology are helping businesses tap new arenas of digitalization along with improving lives as well as their ROI. Industries across the globe and domains have already started diving deeper into innovation with AI. If you have a great idea in mind, start looking for an experienced wearable app development company to help you estimate the costs associated.

If you’re an entrepreneur with a revolutionary product idea, you might have already considered building a cross-platform medium of your product. However, there are high chances that wearables might not have even crossed your mind. No matter how great your product is, if it doesn’t support basic functions such as push notifications in technology like…

Although wearable gadgets hog the limelight in every tech conference and meetups, it is the wearable applications that in actuality powers this attention. After all, they are the key to helping brands create connections with their users and provide the capability to analyze the massive amount of data that the wearable sensors push out with…