How Much Does Wearable App Development Costs?

Wearable industry has crossed all leaps and bounds to become a mainstream sector that is here to stay.

There was a time, not too long ago, when wearables were presumed to be a dead sector attracting bottom line attention from the users and investors alike. But, the two tech giants – Apple and Google kept the sector breathing.

Now with Google acquiring Fitbit and Apple launching a new powerful WatchOS in iOS 13, the innovation wheel is once again moving at a high speed. As per reports, the wearable technology market is expected to grow from USD 116.2 billion in 2021 to USD 265.4 billion by 2026, at a CAGR of 18.0%.

This article is intended to answer a simple question for all the entrepreneurs who are looking to enter the space of planning, building and designing a wearable which is fresh for innovation – How much does wearable app development cost?

So, without further ado, let’s begin.

Answering how much does it cost to make a wearable app is an activity that would need to take several things into consideration.

Since we are not talking about any specific app type but are estimating the cost of developing a wearable app as a whole, we will dive into this section holistically. What we mean by this is that we won’t mention the wearable app features or the wearable app tech stack at a specificity level, like we do when we cover the cost estimate of specific applications.

We will, instead, give you an idea of what you should look for when preparing the wearable apps services cost breakdown.

At Appinventiv, we include user research and product design sprint as part of the mobile app development cost estimate. We don’t charge exclusively for designing the user profile and research. But there are brands that do.

In case you come across a brand which does, here’s what they will be doing for you.

They will be creating a venn diagram. On one side they will keep the users who are most likely to use your application and on the other, the ones that use wearable technology. There on, they’ll find a sweet spot where the two will meet. 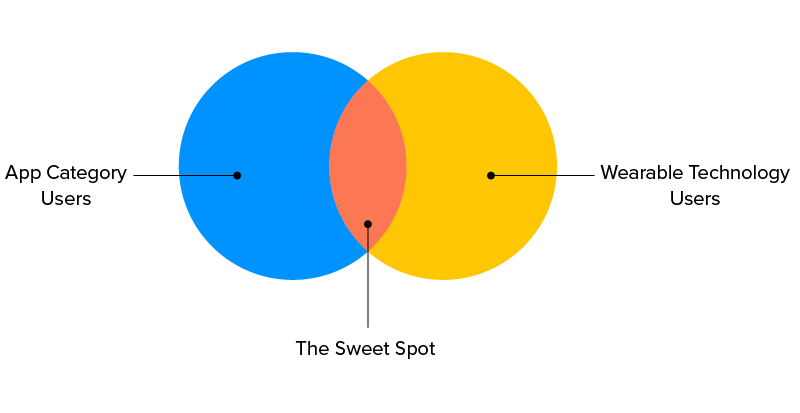 While the first part of the diagram would vary from one app type to another, the other part, which looks into the user type that is most likely to adopt wearable technology has been studied by our team of Business Analysts.

Here’s a visual representation of the finding.

For the sake of this article, let us look at the wearable design from the perspective of smartwatches. This is what you will have to understand when we talk about design specific costs for smartwatch app development.

Notifications: It displays contextual, ambient data. It is generally what makes users launch an application. It offers a lightweight experience, for example answering a message, playing a song, or opening a location on a map.

Watch Face: In the end, a smartwatch is a watch. Noting that, if yours is a time based application, you will have to give it a watch like look and feel.

Wear Apps: These are the applications, your application, which would most likely work without any connection with a smartphone application. In case of these standalone wear apps, you can either follow the same design principle as your smartphone app or make a new one from scratch.

Voice Commands: Majority of the smartwatches in the market today (or ones in pipeline) come with the functionality of voice commands. Meaning, users will be able to initiate commands from their voice. As a Product designer, it would mean a special attention to designing a voice based UI interface.

At Appinventiv, we follow some rules when it comes to designing for wearables, here are what they are:

In case of Android Wearable app development: Wearable apps are developed in almost the same way as other apps which use Android SDK, but they vary in terms of design and functionality – after all, the interactions will be a lot less when users would use the app on their watch.

In case of iOS: Development of smartwatch apps for Apple come with its own set of intricacies. This increases the cost that a wearable specialist iOS app development company would charge. Apple has come up with a new watchOS 6 version along with a slew of APIs to help developers build robust app experiences. They have also come with the functionality of enabling the development of standalone Watch apps.

When you compare the cost of testing a smartphone app versus that of a wearable application, the testing and app maintenance costs will be higher in case of the latter.

Here are the elements that ups the cost in case of wearable app testing.

6. Location of the Agency

The average cost of developing a wearable app also varies greatly depending on the location of the agency. The average hour in the case of an agency which is in Eastern nation will be between $35 to $60. While the same job will be done in an agency belonging to a Western nation in the range falling between $80 – $120. This is the reason why entrepreneurs generally look for outsourcing their app project.

The factors that you read above are the ones that have an impact on the wearable app building cost. As you can imagine, these factors can cumulatively add to the app development cost and make it huge.

This high expense brings us to the next point.

Majority of the wearables active in the market today run on un-intelligent sensor-laden devices (SLDs). The need of the hour is that smart wearable devices should process data independently and act as more than a mere remote sensor.

So, you will have to ensure that the wearable app is based on an intelligent node with the capability of becoming a full-fledged computing system.

Be prepared to update and expand

As a brand trying to create a name in the wearable app market, it will be important for you to be prepared for changes. The technology is in a constant improvement mode. Meaning, it would be unwise to invest heavily in wearable hardware and software, which will only be wither merged later or replaced.

Instead of going with a device which is most in trend in the current time and then thinking of a business idea, take the opposite approach. Find an idea first and then think of the device that would best complement the idea.

Q. How to develop a smartwatch app?

The process of developing a smartwatch app is almost similar to the process of developing a smartphone application. The steps ranging from research and design to development and testing are the same as mobile apps. The only difference is in the approach. The intricacies of the smartwatch app design is not what is required in mobile apps (extent wise).

Q. How to estimate the cost of wearable app development?

The estimation of wearable app development devices cost depends on factors such as features, number of platforms, design complexities, development approach, etc. Read the article to know the process of how wearable app cost is calculated.

Q. How to make money with a wearable app?

The sure shot way of making money with a wearable application development will be through linking it with a smartphone application and following the monetization models like in-app advertising, in-app purchases, subscription model, etc.

Although wearable gadgets hog the limelight in every tech conference and meetups, it is the wearable applications that in actuality powers this attention. After all, they are the key to helping brands create connections with their users and provide the capability to analyze the massive amount of data that the wearable sensors push out with…

Wearables have been a part of our life and an important digital transformation for many years now. In the 1980s, when the first digital hearing aids were first released, we couldn’t have imagined it to become an inherent part of our lives today. In the present day scenario as well, AI in the fitness industry…