Although wearable gadgets hog the limelight in every tech conference and meetups, it is the wearable applications that in actuality powers this attention. After all, they are the key to helping brands create connections with their users and provide the capability to analyze the massive amount of data that the wearable sensors push out with every user movement.

It is safe to assume that if you are on this article, you are one of the visionary entrepreneurs who understand the importance of wearable technology in the business world. Along with understanding, you also get to know how technology holds the potential to change how we play, work, and operate.

Taking assumption one step further, you might have crossed the stage where you needed convincing on why to invest in wearable technology and you have realized that the future of the tech world lies in connectivity. A connectivity that wearable apps offer.

Based on the assumptions set, let us take you one step closer to your wearable mobile app launch, by looking into the factors which can ruin your app’s chance to success. In other words, let’s cut to the chase on the wearable app obstacles standing in front of its revolution that must be addressed well within time before you create wearable app strategy and bring them into development and QA stage.

If, in actuality, you are step behind and belong to the ideation stage where you are thinking about entering the wearable segment, head on to this article: Things to consider during wearable devices app development.

Wearable App Development Mistakes That Can Cost You Your Business 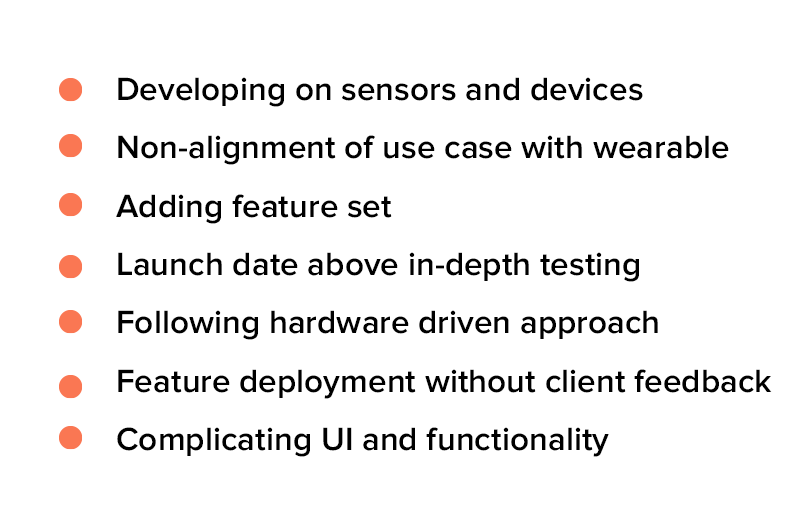 Overinvestment in the present day’s top hardware, although enticing, can be problematic in the time to come. You see, wearable technology, at present, is still finding strong use cases and supporting infrastructure. Meaning, the wearables that you see today will most likely get obsolete by the end of the third or fourth year.

The very notion of connected intelligence showcases that the future of wearable devices lies in them going beyond mere connecting, sensing, and reporting. The smart wearable device must process the data independently and become an intelligent node which in itself can perform the activities around embedded processing, connectivity, and sensing.

Thus, if you are planning to invest in wearable app development, you should ensure that it is made of an intelligent node and has the potential to become a full-fledged computing ecosystem. With this end goal, if you limit your app idea on the device and sensor, it will prove to be a grave wearable app mistake.

2.  Not aligning your use case with the wearable device

Okay, this might sound contradictory. I know I just said that it’s one of the biggest Wearable app development mistakes to solely go by the present day’s top wearable device and create an application at the back of it. But it would also be a mistake to not align your use case with the devices.

When consulting our wearable app seeking partners, we always tell them to create a table with devices on one side and use cases on the other. This way, it gives them a clear idea on how best they will be able to showcase the value of their solution. There are several questions that give a clarity on this front: Would people prefer to stand or sit when using the application? Will they be able to offer the distractions of AR glass? Will they be able to use the app in the office space? and how to avoid wearable app development mistakes?

After deliberation, narrow down the options you have and decide between the available options accordingly. Cases like these are what drive product design company to conduct product discovery workshops and design sprints. These idea validation approaches help us decide the best fit on the basis of real users’ feedback.

Now coming back to the point we started with, while it is true that going by the current hot device can be one of grave wearable app development mistakes, it is also true that your use case has to be aligned with the right device. So before you plan in the direction of wearable app launch, what you have to pay 80% attention to is the app idea and its computational abilities and 20% on the wearable device.

3.  Trying to add a lot of feature-set

Many a times, entrepreneurs in the race to deliver a unique product fill their wearables with a lot of features and functionality sets. You might wonder how this could be a wearable mobile app development mistake. Let me explain.

There are two things very wrong with this approach, as any specialized wearable app development company would tell you.

Elaine Montilla from The Graduate Center said, “Don’t include every cool idea on version one. Always keep in mind that this is not the final product and leave room for improvements and upgrades in future releases. It all requires a continuous commitment to improvement.”

One of the biggest mistakes that you can do is hurry your wearable app developers into app launch with conducting proper tests on them. At the development stage every feature seems feature and viable, it is only after you test in a pool of prospective users you get to know the actuality of your app’s effectiveness.

There are a lot of things that could be wrong with your wearable app apart from security and privacy issues. You will have to ensure seamless connectivity between the hardware and your mobile application, ensure that there are zero bloatwares which would end up consuming a lot of users’ battery life, etc.

When testing your wearable app as a system, you will have to remember that the ecosystem is made of hardware, software (your app) and wearability. Until you evaluate all these three domains together, you will never be able to fully emulate the complete user experience.

Thus developing the infrastructure and architecture of wearable applications around will lead to dependency. Prediction of the future is a tough task and quite impossible, so we cannot say whether the device will work in the next few years or not.

As much as software is evolving, the hardware of wearable devices is likewise unique in nature. Henceforth, never depend on a device rather learn and develop all alone. This is the best way to add something new to the business of wearable technology.

6. Deploying feature without a client feedback

A feature may charm clients from the outset but later it may appear to be impractical for their wearable device. This happens frequently when the experiment is taken on the industry where customers are anticipating development but are simultaneously confused with their necessities.

Deploying product features without customer input can be an expensive mistake. A costly mistake to avoid is to rapidly deploy product features without customer input incorporated into the product guide. Fast emphasis and learning are significant for development; however, customer feedback is center to product usability. Set aside some time to tune in to the problem areas of customers as a starting point. After that address customer feedback in the product guide based on user input.

For the UX/UI designer, this represents a test as it is essential to make a non-cluttered UI while guaranteeing all components are present. From picking background colors that match the brand image, to show measures, and distinguishing symbols that pass on the correct message, wearable application developers must be cautious about their decisions. Most importantly, it is significant that the design is supported by various platforms. 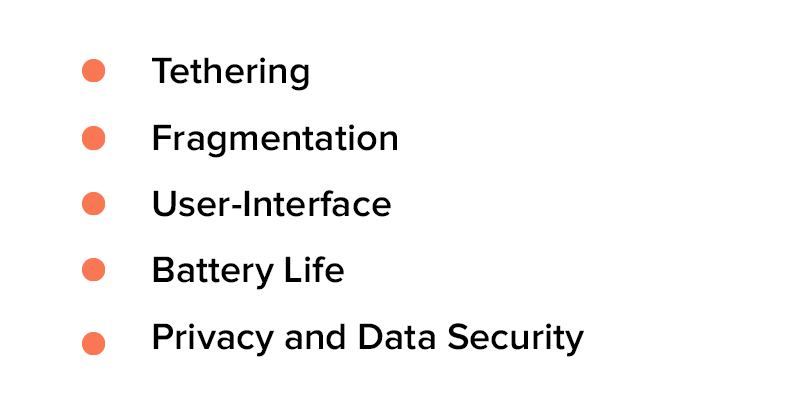 With restricted functions and small screens, most wearables are tethered devices, and not standalone gadgets. They depend on other bigger devices for getting to all the features of an app. At that point, they go pretty useless if the tablets or smartphones they are associated with, have a low battery or just quit working.

Additionally, the wearable which is associated with the smartphone or tablet must be in scope of bluetooth for smooth tasks.

Fragmentation represents an obstruction during the process of wearable app development. A large portion of the wearable applications don’t have cross platform compatibility which brings about the issue of fragmentation. This issue expands the general expense of development of wearable technology.

As referred, the best wearable apps should not just look appealing and work smoothly on the mobile only but also on other devices as well. Typically, wearable gadgets have small screens than smartphones and tablets. Besides, it is a significant task to concoct a design that is alluring yet light.

If your application devours too much battery, it will not get by in the competitive market, especially in the coming future. App stores consider input from users. An application that requires a user to charge their device over and over, won’t do well in the market space. Searching for the correct balance between incredible usefulness and battery-saving features is an always on search task.

Wearable apps are taking away all the limelight and the future just seems to be brighter. Businesses must take into consideration this factor when planning their mobile app development projects. Any idea can be turned into a game-changer for wearable apps. If you are looking for a partner to execute your next project, contact us.

Wearable applications are snatching all the spotlight and the future seems to be splendid. Organizations should contemplate this factor when planning wearable product development projects. Any thought/idea can be transformed to advantage wearable applications. If you are searching for a partner to execute your project, get in touch with us. We are one of the known wearable app development company in USA, to craft easy to use and attractive applications that deliver impressive results on desktop and smartphones.

Wearables have been a part of our life and an important digital transformation for many years now. In the 1980s, when the first digital hearing aids were first released, we couldn’t have imagined it to become an inherent part of our lives today. In the present day scenario as well, AI in the fitness industry…

How Much Does Wearable App Development Costs?

Wearable industry has crossed all leaps and bounds to become a mainstream sector that is here to stay.  There was a time, not too long ago, when wearables were presumed to be a dead sector attracting bottom line attention from the users and investors alike. But, the two tech giants - Apple and Google kept…