How Much Does Video Conferencing App Development Costs?

If there is one sector that has been on a constant demand rise this year, it is video conferencing. While still a profitable domain since the inception of Skype, it shot to fame with COVID-19 sending people to a global self isolation mode. While on the personal front, it is becoming common for people to attend a home-warming party on Zoom, a work happy hour over Asana and a family virtual meeting over Facebook Messenger, the picture is the same for corporations as well. 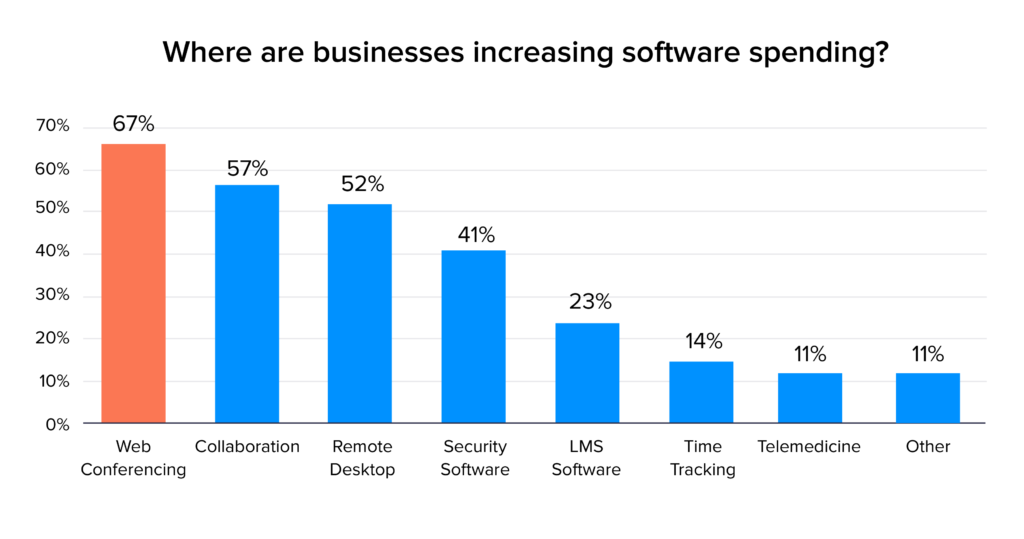 The result of this unprecedented demand for video conferencing apps have led to an event where the top ranking apps in Play Store and App Store are Skype, Zoom, Google Classroom, Google Hangouts, Telegram, Whatsapp, and other virtual meeting and virtual conferencing apps.

The growth in video conferencing apps download number, although the doing of COVID-19 outbreak, is here for the longer run. This, as an observable fact, has led to a number of new entrants in the sector. 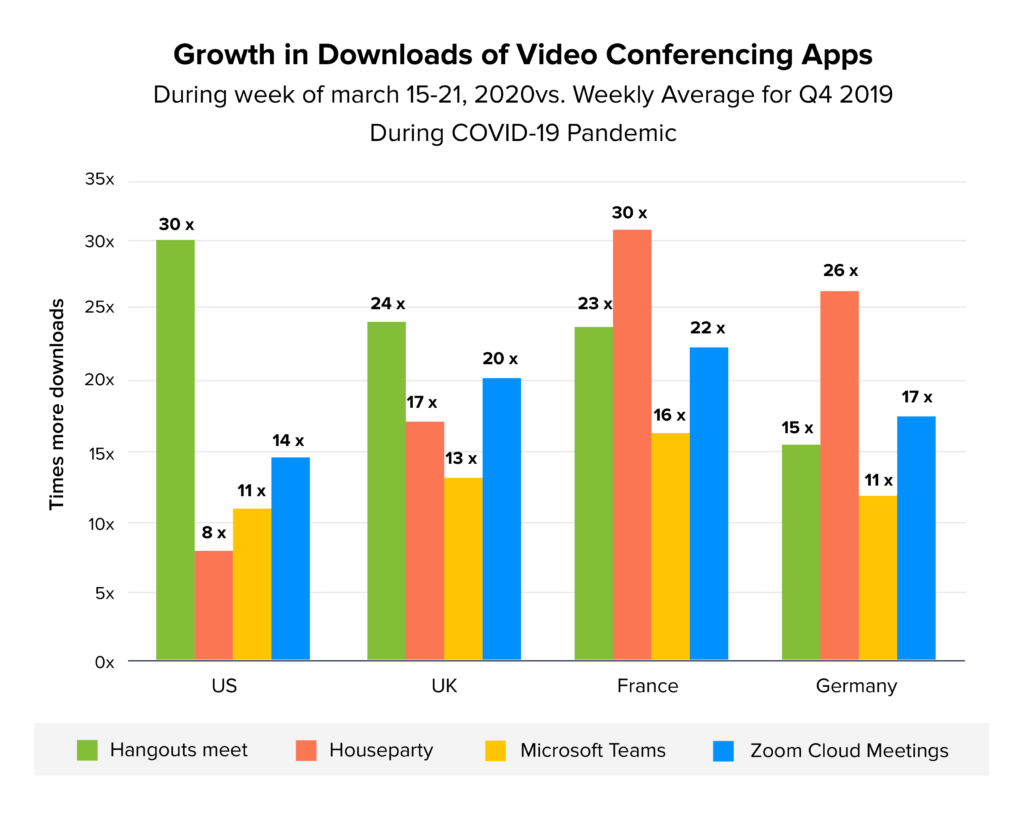 Let us find out the answers in this article.

At a time when the entire world is using virtual conferencing to reconnect with friends and close new business deals overseas, it can be difficult for businesses to fix a target demographic. So, for the sake of this article, we will be assuming that you are looking to launch a online video conferencing app that would be used by both business and casual users.

With that addressed, let us start by looking into the first element of the video conferencing app development cost – conference video call app features.

Even though the premise of a mobile conference app lies in basic texts and calls, there are a number of features that brands are experimenting with to make their application stand apart from the crowd. For example, the popularity of virtual backgrounds is the doing of the work-from-home environment, likewise sharing of the video recording feature is also new.

But since our article focus is on startups and new entrepreneurs, we will be concentrating on the MVP features, leaving the advanced version to when you contact our team of conference networking app experts. 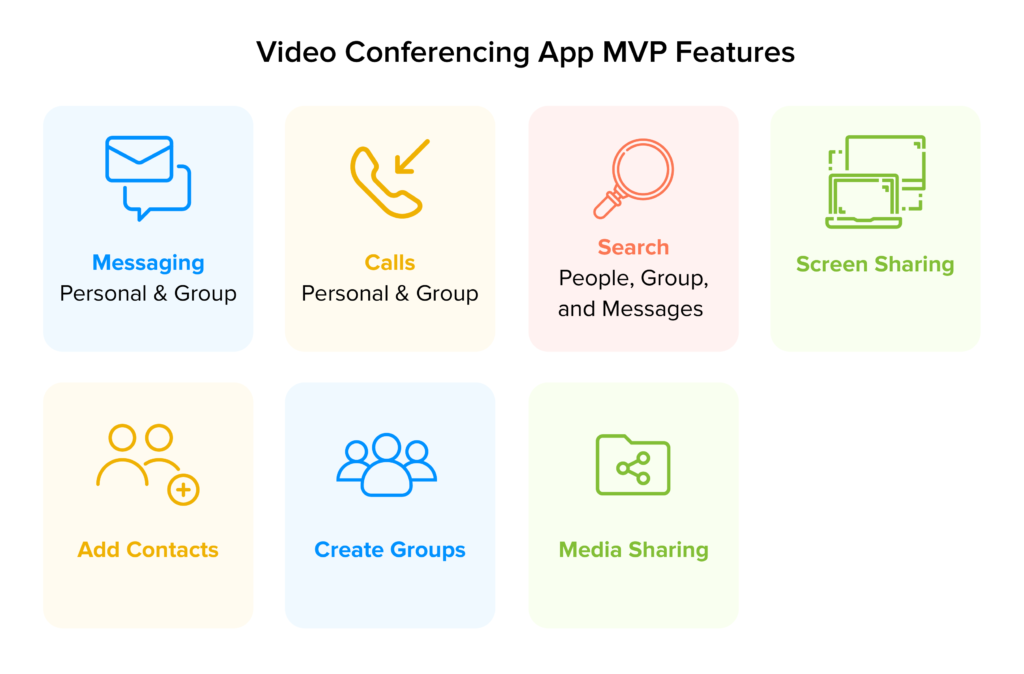 The primary feature of an online virtual meeting app is text messaging or chats. Irrespective of which application you pick, you will find the option laying the premise of the category. Under the text messaging feature you can add words, emoticons, gifs, etc. You can also think of adding and taking benefits of the localization feature by giving users the feasibility to change their preferred language.

Generally, in conference and meeting apps, you get the option to either do one-to-one messaging or group text.

The second must-have feature of an online virtual meeting app is the call functionality – voice and video. And just like chats, you again get two options here: either have one-to-one calls or a group call.

Although the MVP version of the call feature would be to have direct, no nonsense calls, you can take it up a notch by adding virtual backgrounds, voice change, AI-based face stickers, etc.

The next MVP feature that is present in every video conferencing app is the ability to add contacts. For the ease of the users, we advise businesses to add contacts by username, email id, and phone number.

The option to create a group is also of prominence in the enterprise and casual setup. Users now tend to have conversations with multiple people at the same time. This in turn leads to the need of having an application that would let them add multiple in teh conversation without any lags.

For a majority of us, conference and meeting apps have become the only mode of communication since the lockdown driven self isolation. This has led to a reason to reconnect with people and even the inbox getting bombarded with new groups and connects.

The solution to this organizational problem lies in giving users a search functionality to find their contacts or look for groups and even messages.

Although this didn’t used to be a MVP feature till a few years ago, screen sharing has today become one of the most prominent features that especially an enterprise mobile app development company works around. In a business setup when you have to collaborate with multiple people on a single project, the functionality helps in keeping everyone on the same page by making discussions fruitful.

The last feature that we make a must-have whenever we develop a communications app is the ease of sharing media. You should give your users the option to upload media – of multiple formats – and download them (in different sizes). It is important however to ensure that the media transmission is end-to-end protected. You can even think of adding high level encryption methods in the app, which however can add to the video conferencing app development cost.

Let us look into the one that we used when we developed a Skype like video conferencing application. 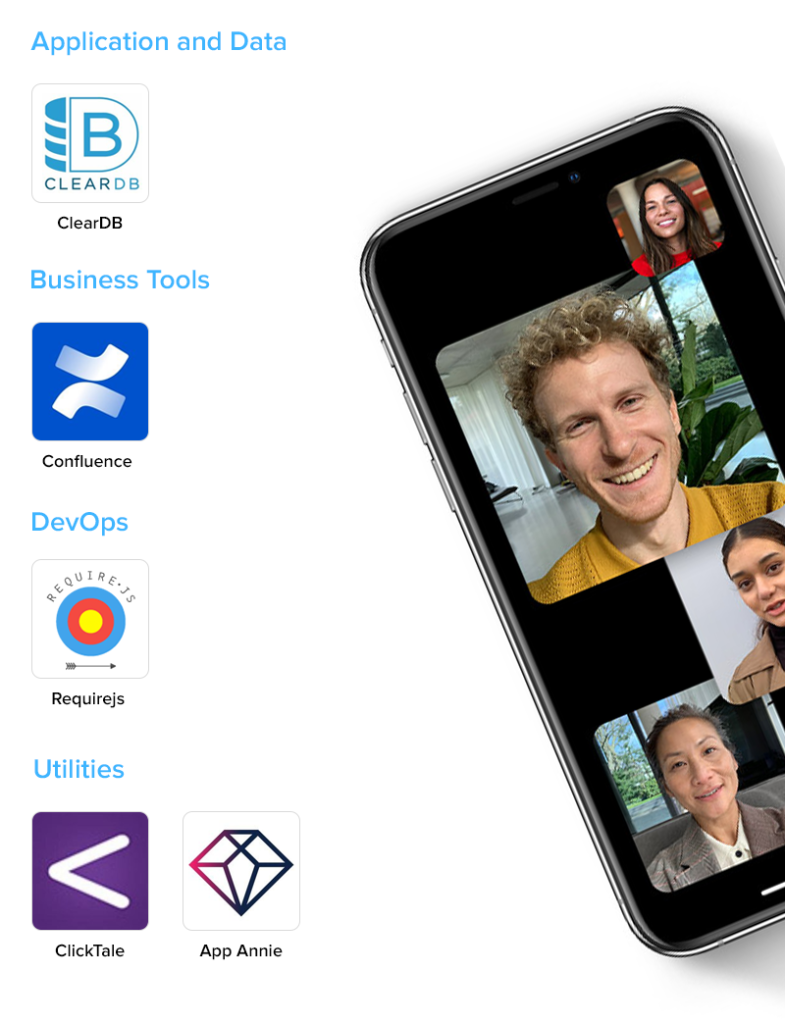 The choice of technology stack is generally a lot narrow when we develop the MVP version of an application. The same rule applies in video conference app development as well.

For application and data we rely on ClearDB, we use Confluence as a business tool, RequireJS for DevOps, and ClickTale, App Annie for utilities.

With this, we have seen the two most prominent cost impacting features of video conferencing app development. But it’s time to address the question directly.

The mobile app development cost is generally the amalgamation of features, technology stack, team composition of designers and developers, and the geographical location of the communications app development agency you are partnering with.

Another thing to note here is that no two projects are the same. And thus, you would need to get in touch with a skilled startup app development company to discuss your requirement, the preferred technology integration, how serious you are in terms of security, etc. to get a quote on video conferencing app cost.

While you are only one call away from knowing the virtual conferencing app development cost, you should know the ways to earn back the invested money.

The end goal for any app entrepreneur is to earn money at the back of the efforts that they put behind the development of their dream application. To that extent, let us look into some of the ways businesses can earn money from their application.

There are multiple options for a video conferencing application to make money:

In a video conferencing app, the option to add subscriptions only works on enterprise level. So until you have businesses as your target group, it would be a good option to work around a Pro plan. This can work on multiple levels – you can ask users to pay if they want to add more than 50-100 people, offer them a suite of background options, or fix a time bridge on the call – meaning, ask users to pay when the set time limit crosses.

While we strictly advise to not use in-app video advertising in the conferencing applications, you can make use of the white spaces for showing image based advertisements.

So here was everything you need to know about video conferencing app development cost and its nitty-gritties. The next step is to get in touch with your communications app development partner.

What Is The Cost To Develop A Marketplace App Like Craigslist?

Remember how before the advent of technology, going to the market to get anything was a tedious task for us. And here we are talking about buying or selling things that often get cumbersome. Before technology was introduced, this task was tough. But now with the internet and online selling apps, it has become easy…