Developing an app is just one part of the process. Making it reach and be usable to the global audience is an altogether different ball game.

Most often than not, an app always surpasses and outgrows the geographical location it was originally made for, making it necessary for brands to plan its expansion across borders. According to 56.2% global app consumers, the ability to get information in their native language is more important than the price of an application. Its growing demand is what is bringing established mobile app development companies that excel in it, in limelight.

So if you ask whether you should keep your app in English and would it be enough to gain traction, it won’t. You will have to make it a multilingual app, which is in languages that your audience uses and not limit yourself to the ones they understand

Acquainting you with how Mobile App Localization method can bring a drastic hike in your revenue chart and how to do that best, is the aim of this write up. We will discuss it all in detail in this article.

We have also added a giveaway, by the end of the article for making it a little more easier to get rich and famous with your app.

But first, let’s start by looking at some brands that implemented mobile app localization strategies and saw a huge jump in their revenue and resonance graph.

Mobile Apps that have Upped their Localization Game

Some of the most well known and most used apps of the world have become what they are today because of their to the point Localization strategies. Applications like Facebook, Twitter, Pokémon Go, Clash of Clans, Replay, and Weather Channel, amongst others are just a few examples of what simply preparing your app to be understood and used by people other than Native English Users can to your brand name.

Here is an infographic to show the statistics that have contributed to making Mobile App Localization one of the main sources of company’s revenue generation.

Even after this detailed infographic, if you are still questioning “Why is mobile app localization important?” then let’s give you solid reasons.

Studies show that, in its first week itself, localized apps witnessed an average of 128% growth in the download volumes once the native languages were added in the mobile apps. Moreover, in their first week, the profits for localized showed an assuring 26% increase. 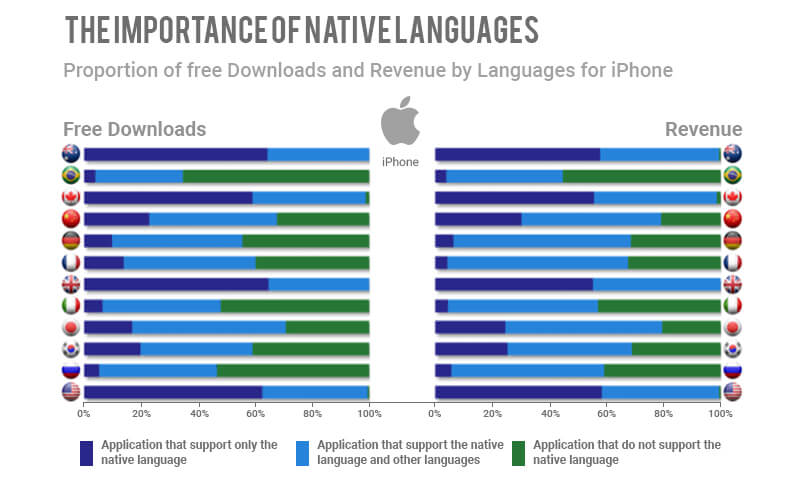 Just by localizing the keywords of iOS app, yielded over 767% growth in number of downloads when compared to the non-localized keywords.

Here is a case study on how Defender’s Quest brought about a peak in its sales figure by localizing their app in six languages – six languages: English, Czech, German, Korean, Russian, and Japanese.

There are still a number of apps that haven’t added Mobile App Localization in their mobile app promotion strategy.While there are some that have made theirs a multilingual app, by partially localized, by changing their store descriptions, but the ones that are completely localized are still in finger countable numbers.

This phenomenon of slow adaptation to the money making strategy can take you ahead very far very soon, if you implement it right away. Apart from gaining points by standing out of the sea of unlocalized apps, the strategy puts you on devices that your counterparts would take ages to get on.

By developing your app to reach international audience, the buyer demographics you had set at the ideation stage, automatically rises to a great extent. And it doesn’t stop there.

The chances of getting your app popular by word of mouth is also much greater, helping it reach a greater set of audience than is always greater than what one estimates.

Between Android and Apple, there are over 300+ app stores, globally and still growing. Every local store is continuously looking out for the apps that would entice their local users best, increasing the probability of choosing the ones that are in the area’s native language.

A number of non-English stores have a section focusing on apps that are in their area’s local language. There a number of success stories backing the benefits of mobile app localization. Blue Tea Games, the parent of Mavenfall, when released their game in a series of local languages, immediately got featured in App Store’s “Best New Game” category in over 120 countries.

Localization is much more than the high sales figure and rise in download digits. It’s about growing your brand. When you localize your app, you give the impression that your respect the local users and the culture diversity they come from.

While, English is one language that is understood by all, but when you have the potential to influence global users, don’t settle on making them understand you.

Look at Evernote as an example. The app put in extra effort in localization for the Chinese app stores, and it paid off generously. They localized their app name, keeping ‘Elephant’ in its second character. They even uploaded customized screenshot of elements in Chinese language, along with changing their app description content in the language as well.

These fives reasons are the basis of why you need to convert yours in a multilingual mobile app and the one that is localized. But what you need to understand here is that Translation and Localization are two very different things. It is not enough to translate your app in other language.

Depending on which geographical location you are expanding your app in, you will also have to ensure that the cultural integrity is intact. Here is an example to explain this further.

Suppose you have a beauty app that was originally made for the US customer base, but then you plan on expanding it to the Middle Eastern region. Now the model images that you use in your US app to showcase a product might be taken as offensive if used for the Middle Eastern client base. Similarly, you will have to take note of the different ethnicity signs shown by the different nations – this can be in terms of word usage or graphics or even the features that the app is offering.

Now that you know the whys of App Localization, let us now delve into the steps you should take to implement it.

Besides gaining a strong and diverse user base, localizing your app also results in an impeccable increase in your overall revenue and profits. It is because your application will not be restricted to a particular region, area, or demographic and will reach out to an audience spread globally.

How to do Mobile Application Localization

There are some questions that will help you go through the process of App Localization Services and give the answer to “How to localize your app?”. Let’s look at them one by one.

1. How to decide which Language to choose

You can figure out which language should be your priority by looking at – the most used language on the internet and the languages spoken by the most paid users of any app store.

Also, analyze the app stores’ report sheets to see which location you are getting maximum download from and when you find that out, adopt to those languages to increase engagement levels from that customer group. The aim is to make yours a multilingual app that talks in the language of your user.

2. How to decide which nation to target

If the app is already live, analyze the user acquisition performance report in the stores to find out countries you have not localized to, but are seeing many visits from. These visits can indicate an interest in your application from that country and can be seen as opportunity to surge installs through localizing.

While this is the one way, what you can do next, is analyze the numbers of similar apps on the local app stores. This will also give you an idea of which location is right for you.

3. How to do ASO of a Localized App

4.How to implement Localization in Android and Apple

With all said and done, localizing an app is a costly affair. From translation services to customizing your design elements and coding efforts all together, along with other elements can make it very expensive to make your app fit for different regions – especially when you are treading on uncharted waters. The Mobile App Localization challenges also makes it an expensive affair to go global.

When drafting your mobile app localization strategy, the another thing to note is Mobile App Internationalization.

If your app is targeting users beyond geographical boundaries, app internationalization is what you need to pay attention to. App internationalization helps in taking care of varying fonts and content displays that varies with language orientation and screen size, and a number of seemingly minute details, which marks the difference in a seamless, uninterrupted user interface and experience and the one that is immediately recognizable of not being of the native language.
When it comes to mobile app internationalization, everything from the date format to noun usage changes from one place to another, so you will have to be extra careful.

The next thing in app internationalization is paying heed to the different country laws. Check the data sharing and storage guideline of the country you are targeting before you launch your app overseas.

So, how do you ensure that your efforts are not going to a waste? Through MVL.

The concept of MVL is extremely simple. You begin by localizing the basic most part of a content —enough for the local users to find your app in the stores and understand what it is about. If localization, at this level, yield results, you can scale up its coverage and localize the whole app.

The dexterity of MVL makes it ideal for the experimental cycles, as it enables you to analyze the market potential of specific locations. It’s can prove to be a fruitful strategy if the product has a number of global features, like the ones found in utility apps, productivity apps, or mobile games.

In this mobile app localization strategy, you need to focus on a few markets but it should be concentrated. The aim is not to target as many markets, but to penetrate those selected few deeply. You need to create tailor-made features, plan out locally-launched campaigns, distribute in local channels, and so on. One of the great examples of this model is Evernote and its introduction to China. The app went into a fully-rebrand phase and hosted within the country and localized the customer services.

Now it’s time for the Giveaway!

Here is a checklist to ensure that your app is ready to hit international waters.

Introduced in 2016, Lokalise helps you in translating the mobile app. Its features such as inline translation suggestions, export webhooks, project chat, and an API are what makes it one of the most popular tools.

Crowdin is used by many organizations that treat localization as a part of their mobile app development process. The tool is known for simplifying and accelerating the translation of mobile and web apps, games, etc.

Want to know more about App Store Localization? Talk to one of our App Experts.