How Much Does Video Streaming App Like Disney+ Development Cost?

If you give this thought a minute, video streaming app development is a profitable business. Since video streaming platforms are closely connected with the gaming and entertainment sector, businesses will always have a monumental user base and a potential market to target and earn revenue.

Disney+ (or Disney+ as it’s also called) is a Disney owned streaming video service. It is fairly similar to the services like that of Apple TV, Netflix, HBO Now, streameast and Amazon Prime Video. For Disney+ too offers a library of TV shows and movies which can be viewed any time across a wide device range.

In today’s era, Disney+ is a testament to how big the  OTT app development market is and what digital trends are underpinning the media and entertainment industry.

How is Disney+ different from other video streaming services?, you might want to know:

How is Disney+ Different From Other Video Streaming Services?

The Disney streaming app gained wildfire popularity in no time and stood as one of the most downloaded apps at a stipulated time. The number of Disney+ subscribers recently reached a new height of 152.1 million in the third quarter of 2022, surpassing its biggest competitor Netflix in terms of subscriptions. This swift success of Disney+ served as a classic example of high returns on investment in OTT platforms . So, if you are planning to invest in a video streaming app service like Disney+, now is the time to get started.

Now, there are four significant factors such as the stunning features, user intuitive designs, tech stack and original content, responsible for the huge success of the Disney+ app, therefore, ensure that you closely consider all these factors. While you are getting started with your video streaming app development like Disney+, your initial concern must revolve around Disney+ mobile app development cost. To give you an estimated range, the cost to develop an app like Disney+ varies from $50,000- 1,50,000 depending on multiple factors and requirements.

Therefore, in this article, we are going to give you a rough estimate for app like Disney+ development cost. We will also look into a range of different cost facets: the features set, the platform choice, and the difference in cost, etc.

Irrespective of which OTT video streaming application you look at, the feature set would be almost similar in all of them. What separates them in essence of how to create a streaming platform is the content. 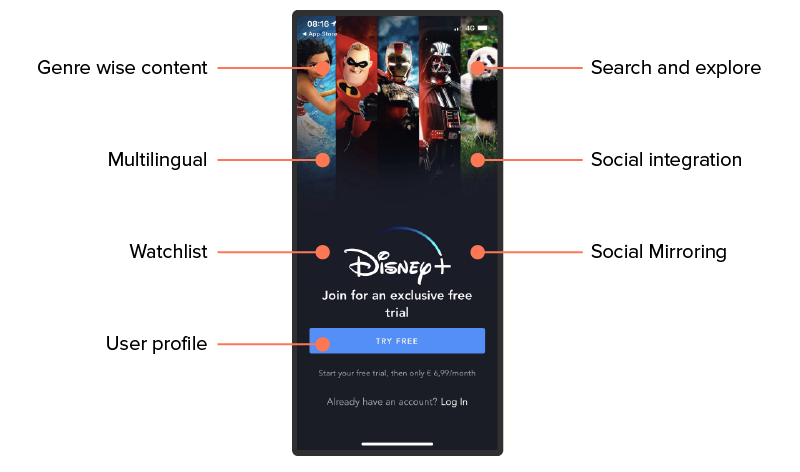 The feature is uncontested. Your users MUST be given a platform wherein they are able to manage the entire experience. Some of the things that you should ask your Disney+ app developers to include in the user profile section are:

Search functionality is one of the most prominent parts of any video streaming mobile application. Ideally, there should be multiple categorizations for the users to choose from. For example, Netflix has set categories around – Shows, Movies, and Genre. But since you are new to the sector and would be finding your grounds, limit the categories. This way, you or your partnered Disney+ app developers will be able to manually handle the distribution of content across categories. Localization is the key to acquiring users. While the statement stands true for all the different mobile app categories, it becomes all the more real when answering how to create a streaming platform. After all, which user won’t enjoy watching content in their regional language.

The multilingual app challenge you might face in app development will highly depend on the key geographical areas you are serving. However, if you aim to reach a worldwide audience, make sure your video streaming app is multilingual in terms of both app and content language.

By playing a massive role in the process of making an app famous, social sharing has made itself a must-have feature of a majority of applications. And an answer to how to build a video streaming app like Disney+.

It is imperative that you have social media icons next to the TV show or movie listing to make it possible for the users to share what they are watching/ willing to watch with their social network.

You might also want to know, how much does it cost to develop a social media app?

Typically, the number of connected devices a person would use is six. In a situation like this, can a brand afford to only be present on smartphones? The answer is no. You cannot.

Screen mirroring is the one factor that all the video streaming platforms have realized and adopted. In fact, the adoption is so much so that making your brand present on multiple devices has become a must-have feature.

The importance is the reason why Disney+ has expanded its supported streaming platforms. Here are devices you can stream Disney+ on:

While the list is fairly long, it should depend on your target segment how many platforms you are planning to add in the Disney+ app development plan.

The next unquestionable must-have feature that affects the cost of Disney+ app development is in-app purchase. The feature is how users will be able to pay you the monthly/yearly subscription. To implement various app monetization models, you must know how apps make money.

With an average American subscriber using 3.4 video streaming services, the need for the implementation of a well-devised push notification strategy is apparent. It is what would help you keep the users engaged with your application and not pass to other service providers.

While these were the top seven features for a successful video streaming service like Disney+, you might also want to consider the technology stack that makes video streaming apps efficient and sustainable.

The success of any Disney+ clone app development relies heavily on the tech stack used.

While the technology stack used in Disney+ app development is yet to be revealed, let us look into the one that generally backs OTT platforms.

Here is the breakdown of tech stack required for developing an app like Disney+ based on various platforms:

How Much Does it Cost to Build an App like Disney+

The estimation of video streaming apps like Disney+ development cost comes down to three main factors.

Number of features, the first factor, along with the technology stack is what separates a $10,000 application from a $100,000 mobile app.

The Disney+ app development cost is also based on app complexity, such as

Apps with advanced features such as the ability to search for friends, push notification, chat, add reviews, comments.

The second factor that affects the video streaming app like Disney+ development cost is the number of platforms the app would function on.

The cost would rise as you move from one platform, say Android or iOS to both Android and iOS. It will keep on rising as you add more platforms in the mix.

The third factor is the geographical location your partnered mobile app development is based in.

The average per hour mobile app development cost varies from East to West. While in the western nations like the USA or Australia, the average hourly rate would vary from $80 to $200, in Eastern nations like India, the cost would be somewhere around $25 to $80.

Creating a video streaming application with the intent to make it popular in the already crowded market is difficult. Ultimately, your success will depend on two things: The feature set and how you design a video streaming service.

The former is expensive to employ. The latter isn’t.

The whole idea behind the designing of a video streaming application like Disney+ is increasing engagement and eliminating clutter. When we describe the Disney+ design, the right word choice would be “Simple”. 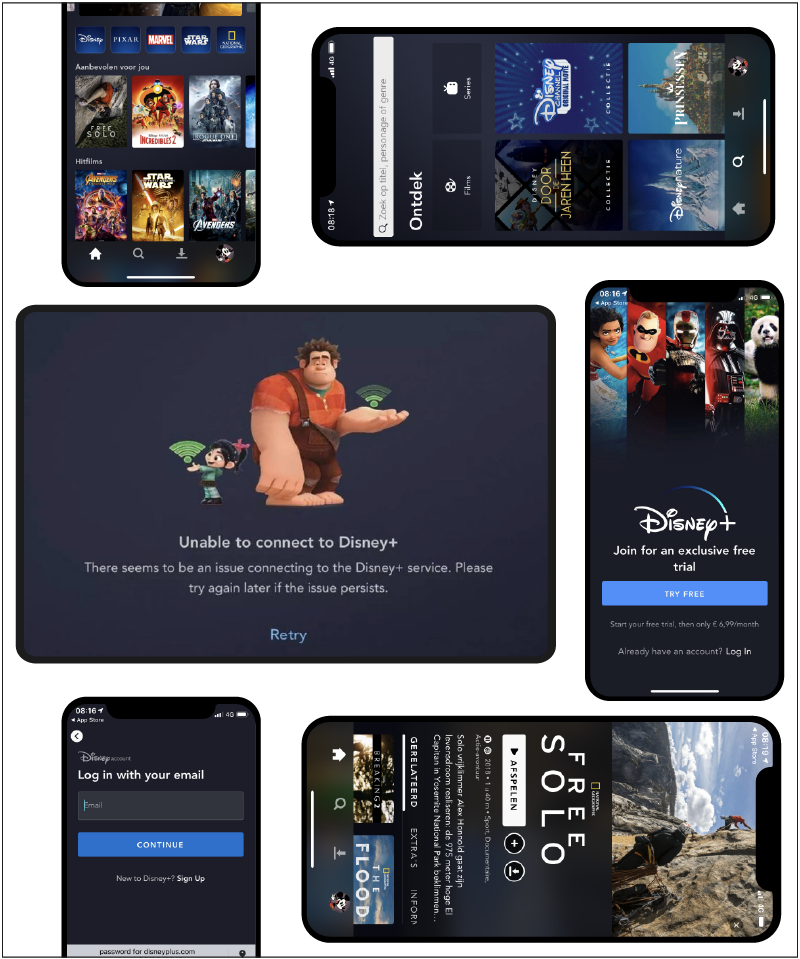 The interface focuses on dividing the content in rows which users can scroll through on the basis of personal recommendations, curated selection, and new releases. The topmost row comes with a carousel with some priority titles to scroll through including newer theatrical releases.

The whole idea behind Disney+ app design is to focus on the content that falls under Walt Disney flagship and not on the product.

The range that we can set, considering the above mentioned MVP like features, elements, and design for Disney+ like app development cost varies from $20,000 – $80,000. However, keep in mind that the range might also vary if you add specific extended functionalities, designs and tech features. With the financial and logical parts of the Disney+ like application development cost now attended to, let us head on to the business side of it.

How to Make Money on Your Disney+ Like App Idea?

Now, here’s a bonus section for you. Do you want to explore certain marketing strategies that made Disney+ app popular among its user base? Well, here’s how your video streaming app can get popular too.

Even amidst a heavy competition coming in from the domain’s giants like Netflix and Amazon Prime, Disney+ was able to get a million people subscriber right when it opened its launch website.

The reason behind this mass attention that the application has been able to achieve is the doing of memories.

Yes! Majority of the people who have downloaded the application or have shown an interest in waiting for the app to get live, are doing it out of the emotions they have towards the brand: the sentiment that Disney brings back their childhood memories.

Besides the age-old connection sentiment, what sets Disney apart is the app marketing and promotion strategies it follows on other platforms through partnerships.

How Can Appinventiv Help You With Video Streaming App Development Like Disney+?

Appinventiv is a leading OTT app development company that blends mobility with media and distributes it to the world. Appinventiv offers custom media and entertainment mobile app development solutions which are designed to not just make your brand a household name but also to keep your brand above the ever-growing crowd of entertainment mobile apps.

Our range of mobile app development solutions include:

Our team of industrial experts specializes in introducing the most innovative of Next-Gen industries into media and entertainment industry app development. Talk to our experts to get started now.

When was the last time you had to sit across your television and wait for your favorite show to broadcast?  You might not remember the waiting, since it's been years we have been binge watching on OTT platforms. Over the past decade, the media and entertainment sector has undergone a digital revolution. The demand for…

How to Create a Video Streaming App like Netflix? Features, Tech Stack, and Costs

“Just one more episode….”  This phrase has become a conventional part of our daily lives, just like scrolling the feed on Instagram, sharing memories on Snapchat, or ordering food from Zomato. And the full credit for it goes to “Netflix.” The VoD or on-demand video streaming application has taken the entertainment experience to an instance…