Explained: What is Internet of Things (IoT) and How it Works?

Suppose you are going for a meeting to a nearby town. While traveling, a message popped up on your device screen informing that the volume of petrol is going low. You were confused about what’s happening, when another message sharing the details of a nearby petrol station popped up on your smartphone device.

Wondering how is that possible?

Well, it’s nothing but a real-life example of IoT.

Confused about what is Internet of Things (IoT) technology? How IoT works?

Let’s talk about it in detail in this article – starting with some exciting statistics.

What is Internet of Things?

IoT, also referred to as the Internet of Everything (IoE), is an ecosystem of interrelated computer devices, digital machines and objects that has the ability to transfer data to each other in real-time, with minimum human intervention.

These devices include coffee makers, washing machines, music system, TVs, wearables and other electronic devices that can communicate with each other using what is called Machine-to-Machine (M2M) communication.

While this was all about what does IoT mean  and what are IoT devices, let’s talk about a few stats that show the uprising market of IoT:

Now that we have seen what  IoT devices are and the potential of emerging IoT technologies and concepts in the future, let’s turn towards how does the internet of things work and IoT working principle.

When talking about how does IoT works, the process begins with devices that have built-in sensors. These devices are connected to IoT platforms which store data from all the connected devices. The important data is then used to perform tasks that fulfil the needs of people.

When we say the data is stored in the IoT platforms, it doesn’t mean that all the data is useful. Devices carefully select only particular data that is relevant to execute an action. These pieces of information can detect patterns, recommendations and problems before they occur.

This is how an IoT application works with smart systems that automate tasks to address specific needs. 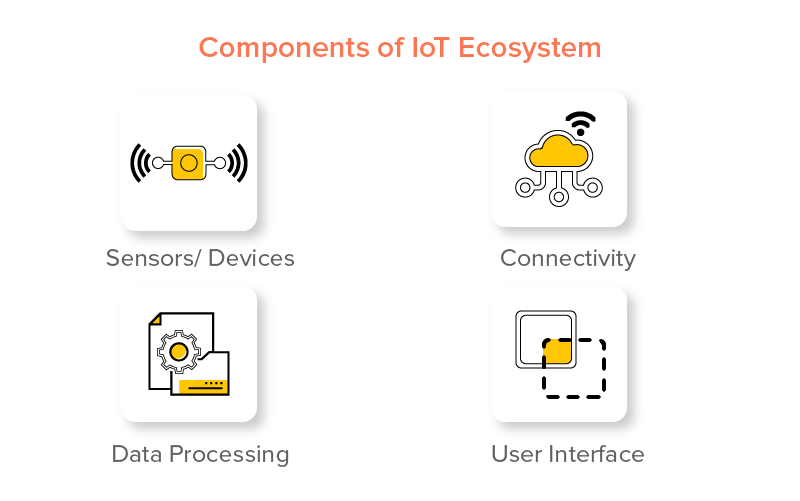 The foremost component to consider in Internet of Things technology is sensor/devices. A sensor picks up all the minute details from an environment. The environment can have many complexities. What makes IoT security so great is these sensors that pick up even the most sensitive changes. These sensors are built in the devices which collect all the data to be used later. For instance, our phone is a device with built-in sensors like GPS, camera, etc.

Once the data is collected it is transferred to the cloud infrastructure (also known as IoT platforms). But to transfer the data, the devices will need a medium. That’s when connections like Bluetooth, Wi-Fi, WAN, cellular networks, etc come into play. These mediums are all different and must be chosen wisely for best results.

The effectiveness of IoT security highly depends on the speed and availability of these mediums.

After reaching the cloud infrastructure the data has to be analysed so that the right action can be taken. This process is however considered one of the most crucial obstacles in front of IoT app development. The analysis can be as simple as checking the temperature of the AC or a complex one such as a situation where an intruder comes in and the device has to identify it through cameras. The IoT application is made such that it can process all the data at a fast rate to take immediate actions.

The last step is when the user is notified about the action with the help of a notification or an alert sound sent to the IoT mobile apps. This way the user will know that his command has been run through the systems.

However, this isn’t as easy as it seems. It all depends on what is IoT technology and how it has been developed. It becomes crucial for Internet of Things (IoT) app development companies to develop a system that can also be manually adjusted. In a situation where the temperature of the fridge is not cold enough to freeze ice cubes, users should be able to do that manually without the system backfiring.

{Also read: How to Use AI to Design Better Mobile App User Experience?}

What IoT Means to the Business World 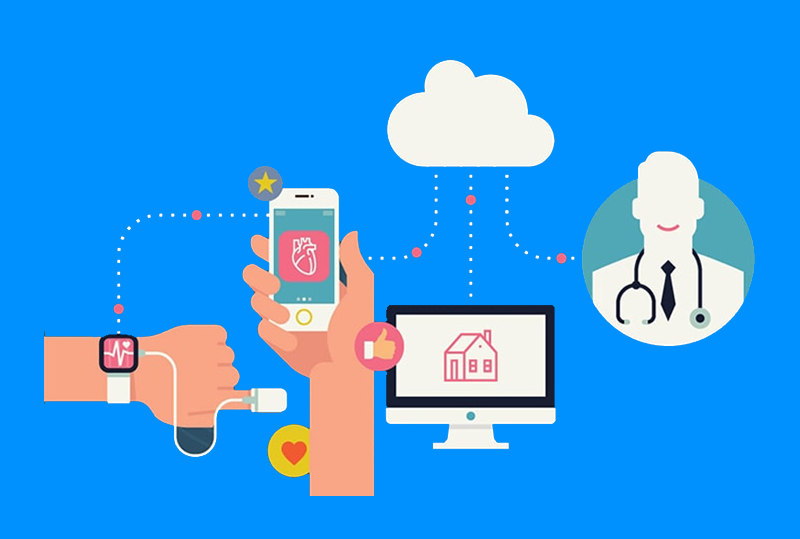 IoT in Healthcare has opened new doors of opportunity for medical specialists and patients. The purpose of  internet of things data is to enables doctors to get real-time access to patient medical data, store them on cloud, and share with others. It also cuts down the waiting time, helps to check for the availability of hardware and equipment, and simplifies the process to identify chronic diseases and take the right actions to mitigate the risk.

Internet of Things technology is also revolutionizing the education sector. It is connecting people worldwide to ease the process of sharing knowledge, reduce the barrier in gaining access to any data, introduce security in education system, and more – a glimpse of which you can take from the video shared below:-

Another domain that is enjoying a myriad of opportunities and facilities after getting an understanding of what is Internet of Things technology and how to incorporate it in their processes is Retail.

The industry, with the help of what we call Internet of Things applications, is finding it easier to deliver personalized experiences to their user base, automate checkout processes, perform maintenance effortlessly, and more.

The combination of IoT and Blockchain, i.e, (Blockchain of Things) is reshaping the Sharing economy. The dual technologies are helping to build an online marketplace where data from all the companies and stores can be stored and shared securely and effectively using the concept of Smart Contracts. And eventually, used by others with the motive to cut down the efforts required from the user end. 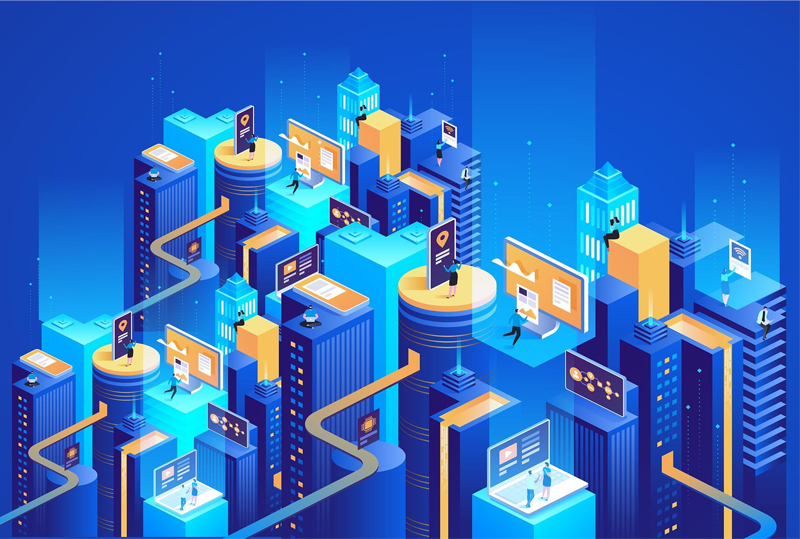 Here, IoT is empowering travel agencies to deliver real-time information, automate most of the processes, and send electronic key cards on guests’ smartphones. And in this way, adding convenience, ease and security to their experience.

1. What is IoT simple explanation?

IoT, in simpler terms, is a technology that connects all electronic devices together and prompt them to exchange information without any human intervention

2. Can IoT work without the Internet?

Yes, it is possible in some cases.

3. What does IoT mean and what are its uses?

IoT refers to an ecosystem of interconnected devices that share information with each other without human intervention. Different IoT applications that exist in the market are Smart homes, Smart Grids, Connected Health, Wearables, etc.

4. What are examples of IoT devices?

The Internet of Things examples include smart TVs, speakers, toys and wearable devices.

5. What are IoT devices?

6. What devices are considered IoT?

So, as discussed in this article, the future of Internet of Things is bright ahead. It has a wider scope in almost every business vertical. The IoT ecosystem connects vendors and companies and makes solution planning simple for an efficient, reliable, and secure IoT system. But, if you still have any doubt related to how does IoT work, what is IoT devices, or wish to design an IoT-based solution for your business, connect our IoT mobility experts today.