With the user base count standing in the ballpark of 150 million and growing, FaceApp has become an overnight sensation. The FaceApp centric internet searches are divided between those users who are searching how to use FaceApp and entrepreneurs looking for an answer to how much does FaceApp like app development costs.

We are here with the answer to the latter.

Wondering is an important aspect of human nature.

We constantly wonder what would happen next, what happened in the past, how is the present going, what is it like for the opposite gender – is life as easy for them or more difficult.

This constant human emotion, which fuels their train of thoughts, when tapped by businesses as a model to center their app’s brand voice around, creates success stories.

These wondering driven apps have the potential to become chart-topping apps, even when they are not very high on the innovation chart.

One such app which is making people from all across the world and social status wonder is FaceApp.

The Popularity of FaceApp

If you have opened Instagram or Facebook lately, chances are that your feed is filled with people – your friends and the celebrities you follow – uploading pictures of themselves. 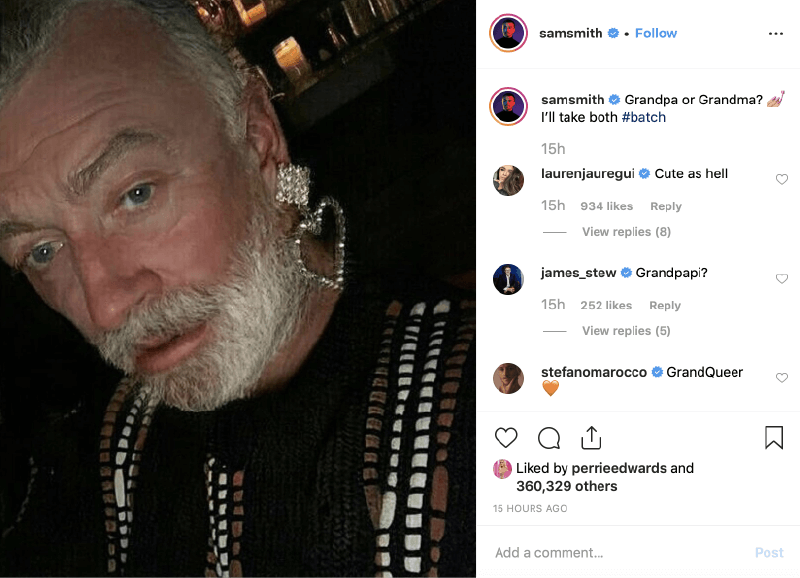 The internet, especially the social media platforms are flooding from millions of face altered images coming in from all across the world adorned with the #FaceApp hashtag.

And once Jonas Brothers joined the bandwagon, the popularity of the app went on to know no bounds.

The popularity that the app is presently witnessing is not only the contribution of the millions of users who have fallen for the influencer marketing and paid promotion practice of the app and are now using it on an everyday basis.

The popularity of the app is also driven by entrepreneurs who are looking for a ticket to overnight success – something that FaceApp has proven itself to be.

Let’s take you through the different elements that would come together to define the FaceApp like app development cost.

But before we go ahead and look at all the technical parts that would define your cost of FaceApp like app, let us first look at the present-day standing of the application in the Play Store and Apple App Store.

Ranking of FaceApp in Play Store – 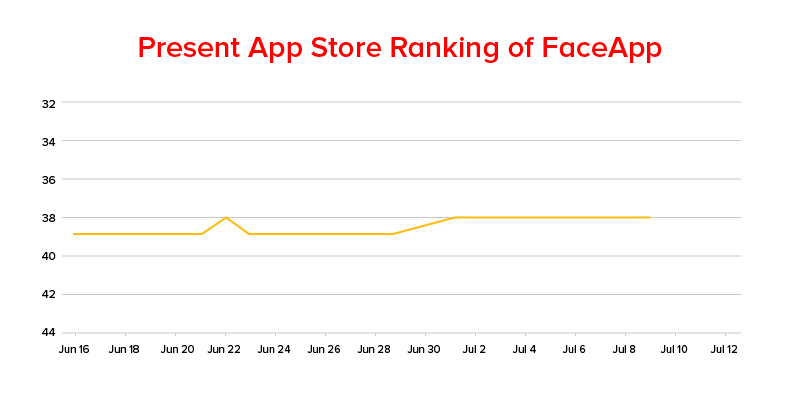 The rankings that FaceApp is presently operating in, is a sign of how stable its growth is expected to be in the coming time.

In fact, in just a matter of a few days, FaceApp has come neck to neck with a number of face altering apps that are already present and flourishing in the stores.

Operating in the same app category, there are a few features that are same in all these applications, while a few are specific to FaceApp.

Let us look at all of them. 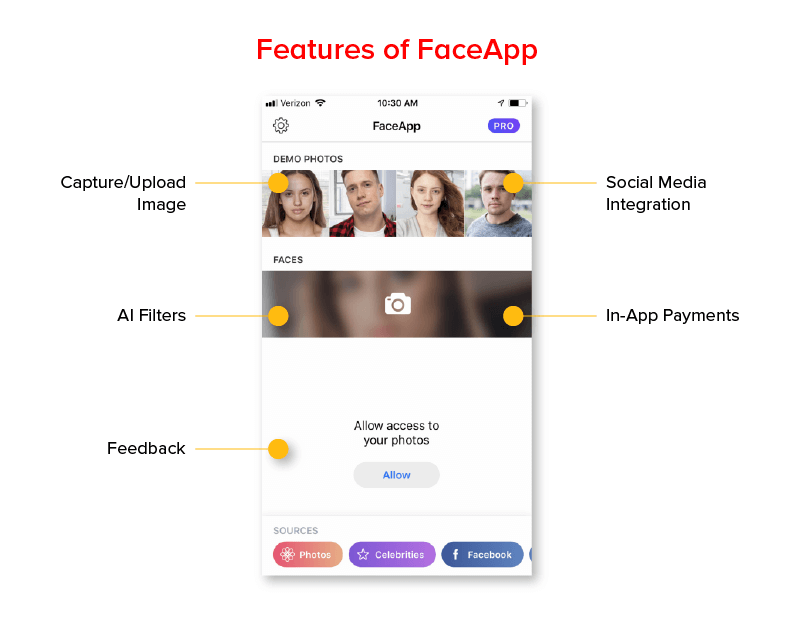 The first basic feature that you will have to add in your FaceApp like application is the facility to capture or upload an image from the gallery.

*A point that you will have to note here is that FaceApp is presently facing backlash from users because of not asking for permission before uploading their photos. So, make sure your partnered FaceApp clone app development company has a provision set for the issue.

At the heart of the FaceApp lies AI-powered filters. Once you upload your image or capture one in real-time, it’s those filters that change your appearance into an older/younger you or a different gender you, or simply a make-uped you.

In order to have an app like FaceApp developed under your brand name, you will have to make use of the same technology that the app and many other similar editing apps use – Neural Networks. And along with that, you would need multiple filters to let your users play around.

Bonus Read- How much does it cost to build a photo-editing app like Facetune?

FaceApp functions under the premium model. The app comes with several free features (in addition to free installation) but asks users to pay a certain amount to access the premium features.

The premium features that FaceApp offers include – filter updates and no ads experience. The payment mode that they have set for getting on the PRO mode is in three parts – Monthly, Yearly, and Life-Time.

FaceApp gives the provision of passing along feedback and app issues to the developer team from within the application. They have made it a matter of a few clicks for users to pass their issues along.

Although the core list of FaceApp complete features which goes into answering what is the price of creating an app like FaceApp is fairly straightforward and mainly dependent on the neural network surrounding AI algorithms, ensuring that they are devised in such a way that a load of millions of app users can be held in real-time is not.

It requires a strategically brought together tech stack for agencies like FaceApp making companies to develop an app that is able to take the load of the masses coming in from across the world every second.

Now although app engineers have not revealed their tech stack yet, leaving the question what technology stack does FaceApp use unanswered, our team of FaceApp like app creators believes that this is what the technology set of the famous application looks like –

While we think that these technologies are what goes into answering what technology stack does FaceApp uses? The real answer might differ slightly for the frameworks required for each stage of the development process are many in number.

With the technical elements of the FaceApp like app development cost constituents now attended to, let us now look into what we intend the article to answer.

Let us give you the estimate that a FaceApp clone app development company would charge to develop your version of the viral app.

While the general restriction of giving a concrete answer to exact mobile app development cost stands upright in the present case as well, we will be able to give a ballpark cost range on the basis of the mentioned features and tech stack.

If you decide to choose the exact same combination that we have mentioned above, the cost that would have to pay to the team of FaceApp like app creators would come out to be USD 100K to USD 120K.

Discuss the Exact Elements That Went Into the Price Range With Our Team of FaceApp Like App Creators.

Although the range that the development of FaceApp like app demands is on the higher side, the returns are much greater.

But only when you know the formula that worked for FaceApp. One that aligns with the secrets of making an app viral.

Let us look at what made FaceApp Viral.

The Virality Formula That FaceApp Follows

The overnight success that FaceApp is witnessing is the outcome of months of planning that went behind crafting a kick-ass promotion plan.

What worked for them (and can work perfectly for you too) was a two-fold marketing plan. One that was guided by the ‘Construction of a New User Narrative’.

The app idea itself is what works hugely in favor of FaceApp. The fact that it hits upon the innate desire of the users to explore the different facets of themselves is an instant hit.

FaceApp gives users an answer to their desires to know what they would look like when they are old, if they are of the opposite gender, etc.

Once your idea hits the sweet spot, it only takes a little push to make it viral. Something which was taken care of by FaceApp team in two ways –

The first step to virality that FaceApp followed was Influencer Marketing.

The brand started with paid influencer marketing first, which eventually grew on to other social media influencers and celebrities catching up on the trend.

This snowball effect that the celebrities and social media influencers started took very little time to reach on to the users who are now carrying forward the app’s name across the world.

Now that you have looked at the basic nitty-gritty that surrounds the FaceApp like social media app development along with the amount that you would have to pay to get your version of the popular app made, along with the formula of FaceApp’s success, the time now is to get started with the development process.

Which you are only one scroll away from.

Fill up the form below to get in touch with our team of FaceApp like app developers today.

How much does it cost to build a mobile app in the UAE?

All thanks to technological advancement, mobile apps have become the most dominant form of digital communication. Playing the most vital role in the overall success of a business, they are capable of offering the amenity of access on-demand to information and solutions. Now, mobile apps are one of the latest and most adapted marketing methods…