Explained: What are Smart Contracts and Their Applications

There’s no denying the fact that Blockchain has changed the whole economy. The technology, with its characteristics of immutability, transparency, anonymity, decentralization, and security, has made myriad changes in the business processes.

But, one characteristic that has made blockchain even more popular is elimination of third-party intermediaries. The technology, in the form of smart contracts (especially ethereum smart contracts), lowers the chances of any process conflict, saves time, and makes the process cheaper, faster and efficient.

But, what exactly are Smart contracts? What makes them more popular than other blockchain applications?

Let’s find out together in this guide – starting with a simpler definition to smart contracts.

How do Smart Contracts work?

Applications of Smart Contracts in Different Industries and Sectors

What Smart Contracts Does Not Promise To Do

How to Overcome the Limitations of Smart Contract

Smart Contracts, as highlighted in our Entrepreneur’s Guide to Blockchain, is one of the three pillars of the Blockchain technology.

Smart Contracts help you exchange anything of value in a transparent, conflict-free ecosystem that is based on Blockchain. 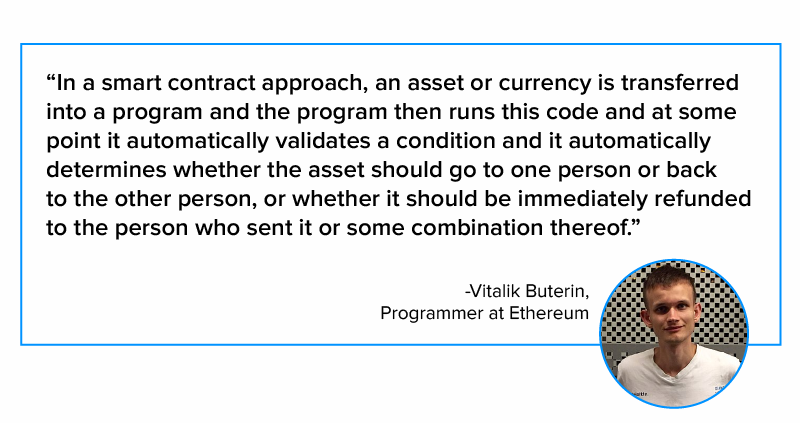 Smart Contracts are basically self-executing contracts which are programmed in a way to ensure that the terms of agreements are met/unmet and then take a resulting action.

With the smart contracts definition cleared, let’s dive deeper and understand the working of this blockchain concept.

How do Smart Contracts work?

To understand how smart contracts in the blockchain environment work, let’s take an example.

Suppose there’s a person ‘Albert’ who wishes to sell his car to ‘Nancy’ in return of payment in cash. They form an agreement on the Ethereum blockchain via a smart contract, which states  –

“WHEN Nancy pays $25,000 to Albert, THEN she will receive ownership of the car”.

Since this smart contract agreement is placed in a blockchain environment, it cannot be changed. Implying, Nancy need not fear that Albert will suddenly demand more money. Also, she need not pay an additional fee to third-party companies like banks, a lawyer or a car broker to prove that she has made the payment.

This implies, she won’t have to pay an extra commission or face delays in processing of the agreement due to any external factor. The smart contracts are executed automatically when the related condition is met. 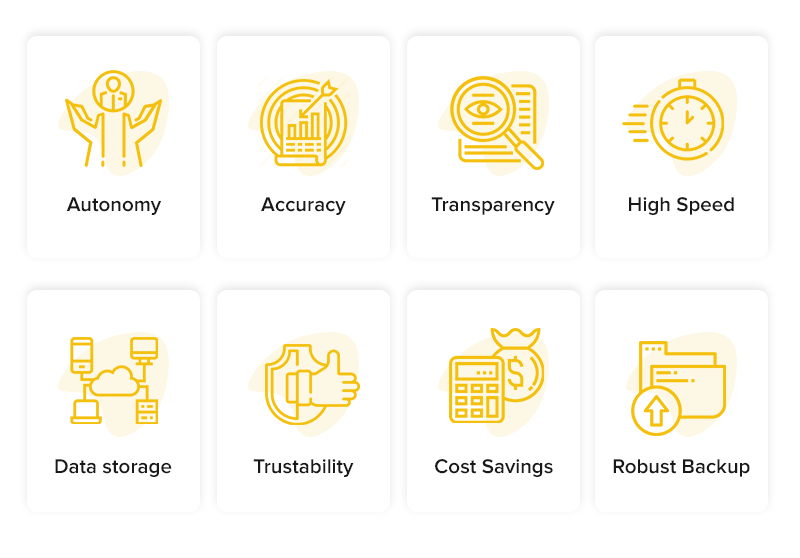 The foremost benefit of blockchain underlying smart contracts is that they are decentralized in nature. They do not require the involvement of any third party in the process. Meaning, the autonomy is maintained.

Smart Contracts are based on the requirement that all the terms and conditions are recorded explicitly.

One of the prime benefits of smart contracts is that it minimizes the dispute cases to zero.

The TnCs of Smart Contract are visible and are accessible to all the parties, which negates the scope of the dispute. Also, since a smart contract is definite and comes with no between the line clauses, the chance of dispute gets eliminated.

As these contracts run on software codes, the speed of executing transactions are much quicker with Smart Contract as compared to real-world contracts, which calls for man-hours for documentation.

Smart Contracts record a set of essential details in every transaction, meaning that your details that are recorded in the contract get stored for future records, permanently.

Again, Smart Contracts come embossed with a myriad of features like – Transparency, Security, and Autonomy, without zero possibilities of bias, manipulation, and error. This adds trust to the ecosystem.

By automating a majority of tasks and eliminating third-party intermediaries, smart contracts also lower down the cost associated with its implementation.

Since smart contracts replicate all transactions, it becomes easier for parties to have a backup of all the transactions even when the data storage device fails.

Applications of Smart Contracts in Different Industries and Sectors 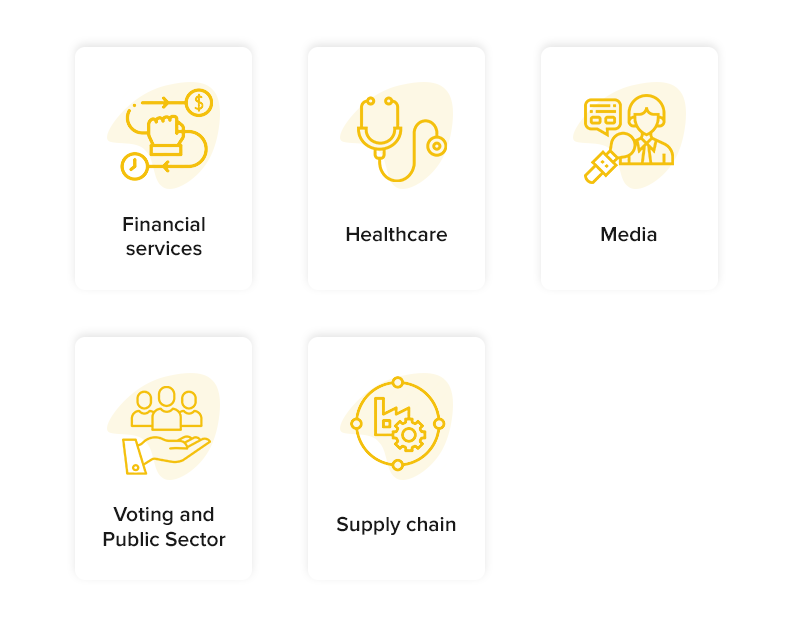 When talking about the implementation of smart contracts in financial industry, it helps in transforming the traditional services in numerous ways –

Smart contracts are also changing the healthcare landscape in the form of different uses, a few of which are –

Public data can be stored on Blockchain and with the help of Smart Contract, the information can be sent to the parties asking for them, keeping the data owner in the loop.

Likewise, the voter criteria can be validated and specific actions can be taken by entering into the blockchain ecosystem.

The advent of smart contracts in the supply chain is also making it possible to perform various actions, such as –

What’s more, different types of smart contracts are revamping the IoT ecosystem. They, as a part of the Blockchain of Things system, are helping sensors and connected devices create their own nodes in the blockchain database, track orders in real-time, and this way, ensure the correctness of the product from the initial shipment to delivery end.

With such benefits and use cases, Smart contracts are becoming the face of various business verticals. It is encouraging various startups and established organizations to hire a reputed blockchain development company and become a part of the future of smart contracts. The one who’s market size is anticipated to be worth nearly USD 300 Mn by the year 2023. 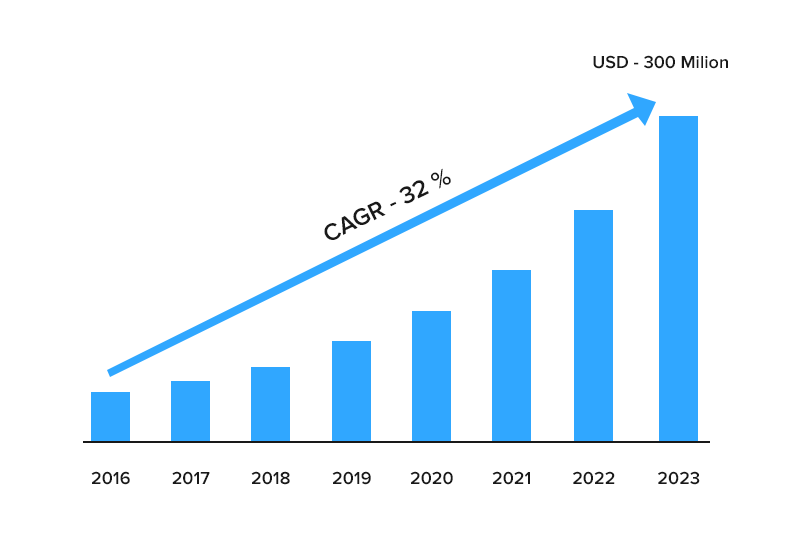 However, there’s a glitch.

Though loaded with a vast number of pros, Smart contracts in the blockchain environment are not fully-developed. They too have some limitations.

So, considering the same, let’s hit on the area which throws a light on the limitations of the Smart contract concept – one which are rarely talked about.

What Smart Contracts Does Not Promise To Do 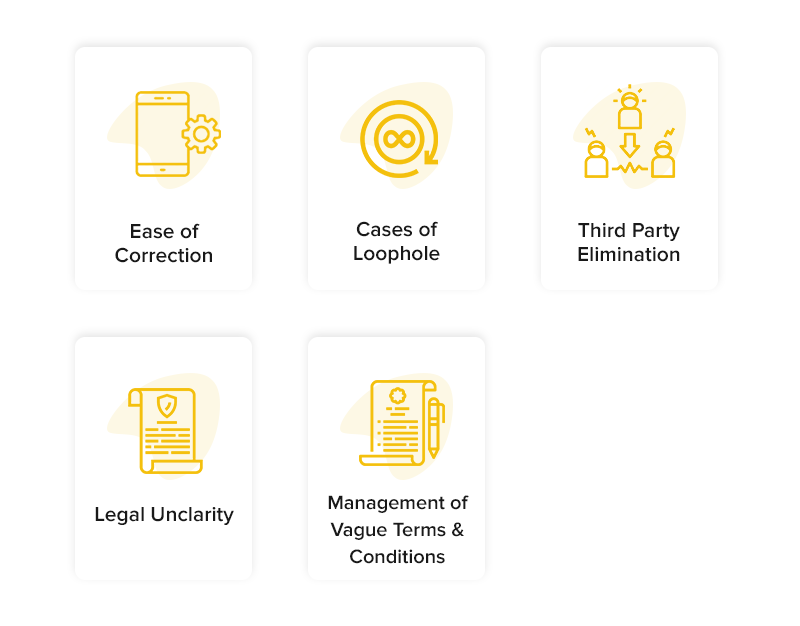 Being a Blockchain element, Smart Contracts come with the same benefit of Immutability as Blockchain. While this immutability set standards in terms of security, there are a few limitations that come tagged along as well.

Since they are nearly impossible to change, even the slightest error in code can turn out to be expensive and time-consuming to correct once the smart contract is deployed to execute.

Unclarity when it comes to ‘implied covenant of good faith and fair dealing’. In the US Law, there is a concept of Good faith, which states that the parties will deal with each other fairly and won’t rob each other off from getting the benefits of the contract.

But, with Smart Contracts, it is difficult to ensure that the terms are met in accordance with what was implied.

Suppose you order an autographed Tennis Ball but what you get is a forged ball. Now, under ordinary circumstances, you would have been able to take the case to the court following the Contract Law, but with Smart Contracts, the possibility is next to nothing.

Take lawyers for example. While yes, it is true that users will not have to go to them to get the contract made, developers will have to be in contact with lawyers to know the terms on which the smart contract will be based.

In the end, the involvement of third-party entities never goes away, they just take up different roles from what they take in the non-decentralized smart contract.

To determine which party is right, users will ultimately have to resort to starting a legal procedure – avoiding which was the one reason Smart Contract was ever brought into existence.

Contracts are made up of several implied terms and conditions, which are not all in black and white. While it is fairly easy for a smart contract to deal with the transaction where only a very limited set of parties are involved and the event that they have to perform is fairly direct, if you plan on introducing an event like the one used as an example above, smart contracts fail to be the right mode.

Inability to handle vague tncs are one of the major Smart Contract legal issues, which is staring at immediate rectification if the concept wishes to see mass adoption.

These are some of the issues that have come to the surface now when Smart Contracts are yet to see mass adoption. More are expected to come bubbling up as the concept grows and find a place in integral part of all businesses.

In the end, as far as you, as a business, look at the positive sides of the Smart Contract, you will see a number of reasons to introduce the concept in your business, but when you boil it down, a number of limitations come up, which can majorly be resolved in one way.

How to Overcome the Limitations of Smart Contract

Either you work your way around by ignoring the shortcomings of Smart Contract, assuming that the concept will revolutionize your business or you take the right move which would make your Smart Contract, whether it is an Ethereum Smart Contract of one that is based on any other platform, unhackable.

The Right Move talked about here is Hiring a Team of Blockchain Developers who are well accustomed with the concept, have knowledge of Parallel Programming, Know of the kind of bugs that can come in writing the Smart Contract Code.

Only when you invest in a team of Smart Contract experts, you will be able to get a contract that is ready to be complex.