How to Launch an IEO Successfully? [A 6-Minutes Guide]

In the past few years, the cryptocurrency market has evolved a lot. What was once just about bitcoins has now become the market of  various digital tokens. Several entrepreneurs and traditional investors have been awed by the huge success of cryptocurrencies and turned towards investing their money in this marketplace with a hope to gain maximum profits.

This is when people started picking ICOs over traditional venture capital models.

However, with time, it has been found that ICOs are involved in fraudulent cases. In fact, according to a report by Investopedia, 80% of ICO sales are found to be scams with around $9 Mn of loss on a daily basis. Many regulations also came into the limelight which ruined the popularity of ICO funds.

But, after China banned ICO’s in 2017, the business model changed completely. A new model called IEO came into being, which eventually made everyone look into ICOs vs IEOs comparison and use the latter to raise funds for their blockchain startups.

In the midst of this, if you are an Entrepreneur wondering how to launch an IEO that brings higher revenue to your blockchain business, you are at the right place.

But, let’s begin with a brief introduction to IEO before diving into the market and analyzing different factors and steps to list down and launch an IEO successfully in this guide.

In a hurry, jump directly to –

What is an Initial Exchange Offering (IEO)?

An Initial Exchange Offering (IEO) is the crowdfunding strategy where funding is conducted on cryptocurrency exchange platforms such that the crypto exchange administers the sale on the behalf of startups seeking for fundings.

When talking about how an IEO works, the simplest process is as follows – When a token sale is announced, IEO participants create an account on the respective exchange platform instead of sending contributions to a smart contract. They fund their exchange wallets with coins and employ those funds to buy the tokens of the fundraising blockchain startup. This whole process is governed by crypto exchange, along with the marketing process in return of a listing fee and a percentage of the tokens sold during the IEO.

Now, as you are familiar with the definition and working of IEOs, let’s take a look at what makes Entrepreneurs feel interested in this type of blockchain funding model.

Reasons why entrepreneurs are focusing on launching IEOs 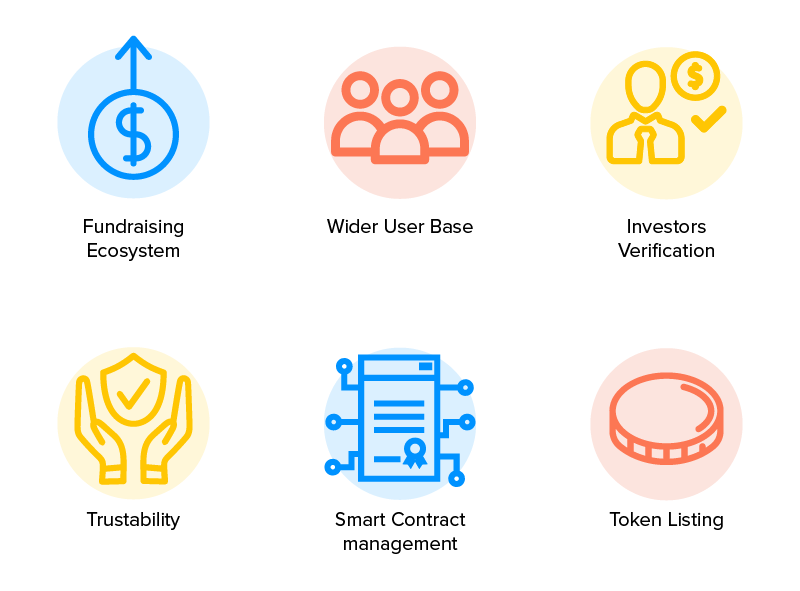 The foremost benefit of considering IEO is that here the fundraising process is governed by the exchanges. Entrepreneurs need not put extra efforts to bring more investors on the platform and encourage them to do a favor. The exchange handles everything from promotion to raising funds, and lets startups get access to the amount once the IEO is over. All in return for a listing fee and a commision on token sales.

Another reason why Entrepreneurs are embracing the idea of initial exchange offering development and launch is that each and every exchange trading platform has millions of users who are actively involved in token sales. So, even if you are not familiar with a wide range of investors, an IEO will provide you with quick and easy access to fundings.

Unlike other blockchain funding models where startups have to verify investors, this task is performed by exchanges in the case of IEOs. Here, the associated crypto exchange conducts KYC/AML to ensure that you do not end up wasting time in partnering with legal companies to perform the verification process effectively.

Here, exchange not solely verifies investors but also checks the credibility of token issuers before launching an IEO on their platform. This makes it easier for both investors and startups to build a trust in the relationship, rather than pondering upon ways to be sure about the authenticity of each other.

In the case of ICO and other methods to raise funds in the blockchain space, smart contracts are managed by token issuers, i.e, startups. But, in the case of IEO, they are managed by exchanges conducting the token sale. This gives Entrepreneurs an opportunity to focus on other important activities without suffering at any point.

Last but not least, IEO also facilitates startups and others with the facility to list their tokens efficiently. Implying, token issuers need not comply with different regulations on raising funds to approach a reputed exchange and list their token. The process begins from this step itself in the case of IEO.

With the advantages of focusing on IEOs over traditional ICO model cleared to you, let’s direct towards what steps to take to launch an IEO.

Steps to consider for launching an IEO 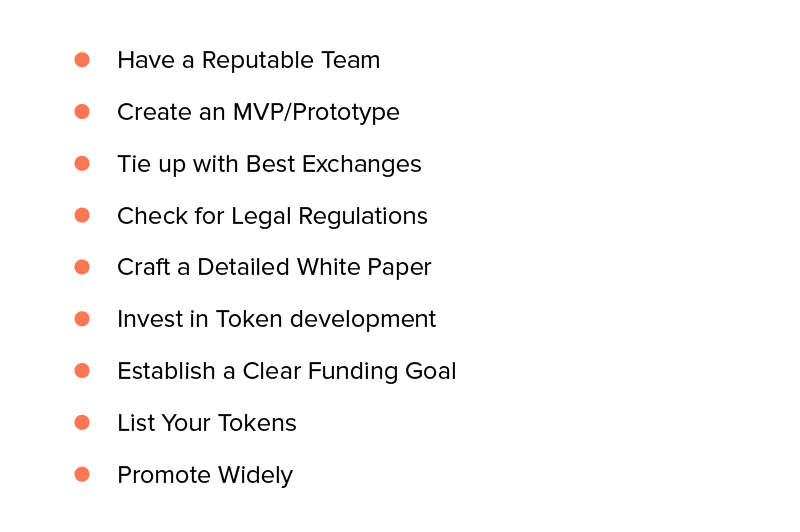 1.  Have a reputable team

The foremost step that acts as the base of your successful IEO launch is the team supporting your project.

A team with competent knowledge about initial exchange offering (IEO) and blockchain environment can help you create and validate your project idea effectively. They can also make investors show more interest in your IEO project, as they prefer blockchain projects that are backed by a team. While, on the flip side, you might end up facing failure.

So, it is imperative that you search for the best blockchain development companies and ensure that they stay by your side throughout the process.

The next prime step towards launching your IEO – the one you have devised on performing market research – is to create an MVP or Prototype.This is so because an operational prototype of IEO or an MVP can make it much easier for investors to understand your idea, determine its validity, and get convinced to further give their fundings than any written description.

3.  Tie up with best exchanges

Another step to implement when it comes to how to launch an IEO is to connect with the right exchange.

The exchange you choose for your IEO project can make a major difference in the success rate, provided they are going to administer the complete process on your behalf, promote your token sale, and more. Also, each exchange demands a listing fee and commission in the raised fund, whose value varies from one exchange to another. Besides, some centralized exchanges are prone to malfunctions and cyber attacks.

So, it is must for an Entrepreneur to pick the right exchange for launching their IEO among multiple of options available in the market – a few of which are as follows:- 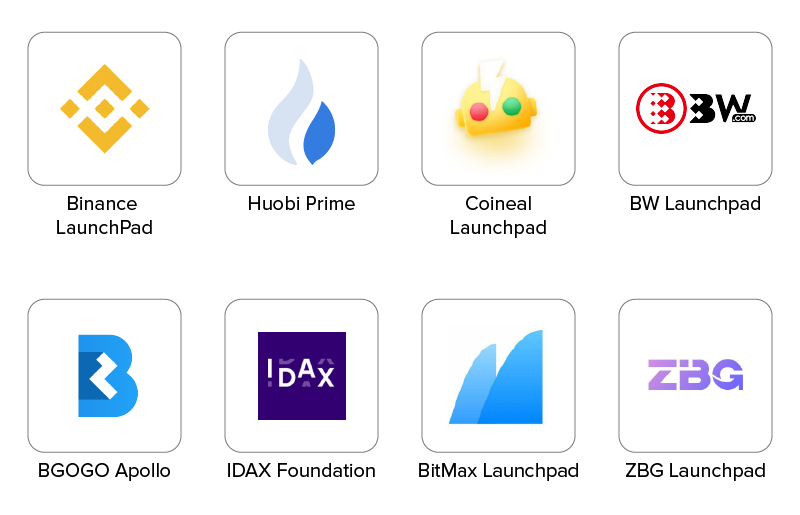 Having awareness of the associated legal regulations is again necessary to prevent any hurdle in the IEO launch process. This is so because most of the popular IEO exchange platforms demand having legal checks to ensure that your token is a utility token. Also, various exchanges follow different processes and requirements; making you turn towards your legal advisor to understand and determine the state of your token.

Drafting a white paper is also one of the prominent stages of the IEO launch process.

A whitepaper, in layman terms, is a comprehensive document that explains about every aspect of your project. Meaning, it covers everything from the objective of your IEO project to market analysis, development strategy, token information, etc. This document helps investors get clarity of your project in the long-term and take a decision in your favor.

This document, when crafted while focusing on tips to consider while writing a whitepaper, can act as your sales pitch and add value to your business. So, look ahead to crafting a perfect whitepaper for your IEO project.

This is the most important step in the process to launch an IEO, since the tokens you create will be further listed on the exchanges and purchased by investors in return of fundings.

When talking about investing in token development, it is advisable to have clarity in terms of how many tokens you want to issue and the associated value, how to choose a blockchain platform, and more. So, focus on this step smartly.

Another thing that is must to consider while launching an IEO is having a clear funding goal. When you do not have the clear funding goal, you would find it tough to determine how many of the tokens must be introduced in the IEO sales before listing on the exchange platform to get the right outcomes. It also prevents you from falling into any scam.

Additionally, the clarity of the required budget to launch an IEO gives an impression that you are focusing on a practical goal, which makes investors show more interest in funding your blockchain project.

So, discuss with your partners and come up with a clear funding goal.

The next step Entrepreneurs must focus upon is listing their tokens on the initial exchange offering (IEO) exchange platforms.

Every exchange platform comes with certain rules and factors that must be fulfilled to list your token and pass the selection criteria for the sale process . So, look ahead to follow this step of the process of launching IEOs carefully.

Though crypto exchanges promote an IEO project, it might not be enough to make your blockchain project successful. So, it is advisable for startups to bring their team on board and discuss different ways to market an IEO project, a few of which are –