How to Choose a Blockchain Platform that Speeds Your Business Growth

90% of Blockchain projects that once started with a solid POC have now failed.

For everyone who has worked on Blockchain or have tried to make sense of it, it comes as no surprise that when it comes to the complex and ever-evolving technology, getting a decentralized Blockchain project off grounds takes more than a great idea — it needs a dedicated team, expertise and right resources for succeeding.

And even then, even in the presence of the golden trio, Blockchain projects tend to fail. Miserably.

Having worked on more than 20+ dapps and Blockchain projects, At Appinventiv, we understand that one of the reasons behind this failure lies at the very core – failure to choose the best Blockchain development platform.

In this article, we are going to look into several subsets around the choice of Blockchain platforms, with a single-focus intent to keep you from becoming a number in the failure statistics.

But before we get there, let us answer one of the most asked questions for you.

If we had to make a list of trendy technology topics dating back to 2010, the one name that would make a constant appearance year after year would be Blockchain. Its promise of transforming economies through features like transparency and interoperability has not gone unnoticed by businesses.

There is also a grim picture amidst a plethora of benefits. The picture of Blockchain POCs failing. Businesses, in the ode to be in-trend end up incorporating Blockchain technology in their process offering without paying much heed to whether or not it would solve their business purpose in short and long term.

As a moral obligation on our part, it is necessary to help you decide whether or not you actually need Blockchain integration in your project, for taking the decision of choosing the best Blockchain development platform will only come much later.

Here’s a decision tree that we, under our role as a Blockchain app development company use to help you make a concrete decision. 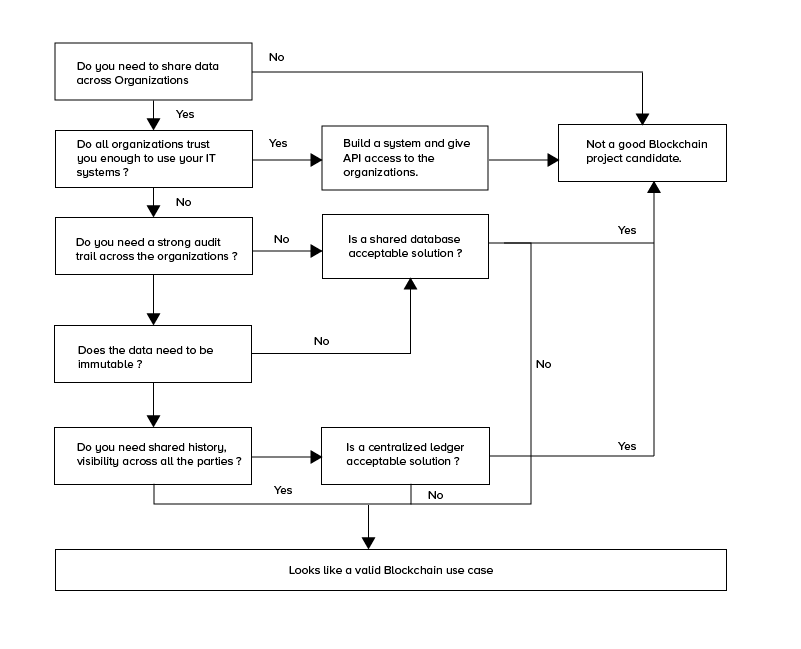 Development of the best Blockchain framework and network from scratch is a utopian state for many aspiring businesses – an expensive utopia that is more or less impossible to achieve when the reality wave of complexity hits.

Types of Blockchain Platforms and their Use Cases

Public Networks – these are decentralized networks that anyone can participate in at any level, including things such as running full nodes, trading tokens, mining cryptocurrency, etc. On the cons side, they are generally more expensive and slower to use. This is the reason why they are not generally considered as a must-have Blockchain platform for startups.

Permissioned Networks – these networks are visible to the public but participation in them are controlled. They are generally very fast  and have low latency plus high storage capacity compared to public networks.

Private Networks – these are shared between the trusted parties and not made open for the public. They are very fast and have zero latency. Most of the private networks do not use cryptocurrency or have the same security and immutability advantages of decentralized networks.

Here are the different use cases between Public, Permissioned, and Private networks to help you dissect the Blockchain frameworks comparison at the crux level. 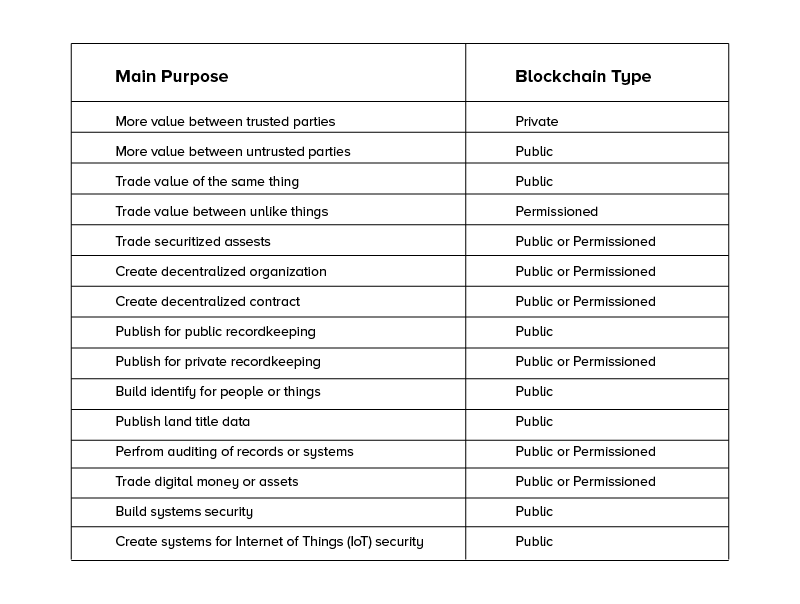 The platform is one that introduced the world to smart contracts. Established in 2015, the platform has leveraged its first mover advantage to dominate the Blockchain landscape as developers’ chosen platform for building decentralized applications.

The core development team along with the massive community has continued to make improvements in the platform, a sign of which is their efforts behind Ethereum 2.0 creation and popularizing. The efforts are a way of making it the best Blockchain platform for startups.

It is an open-source permissioned Blockchain which is inclined at the creation of high-performing DLT which enables cross-industry collaborations. The one of the most popular Blockchain platform is made of six frameworks and seven tools which help businesses adopt Blockchain at the enterprise level.

It is a smart-contract enabled Blockchain technology platform used for deploying and running several decentralized apps. It is a public network platform which anyone can use for creating EOS accounts and submitting transactions to the network – a crux that leads to several points of comparison between EOS and Ethereum.

What makes EOS the best framework for Blockchain is that it reaches consensus through delegation of who will produce each block, which is decided on the basis of a vote in by the token-holders out of a large list of approved candidates.

It is an enterprise Blockchain consortium made of more than 300 firms that collaborated to meet Corda – an open source Blockchain platform. It hosts enterprise distributed apps in sectors like healthcare, insurance, digital assets, and finance. Written in Kotlin language, Corda boasts of a high level of integration with several existing business infrastructures, backing high level Blockchain app development services’ inception.

The platform is a private enterprise fork of Ethereum which targets the financial sector. Brands using Quorum are able to deploy smart contracts written in Solidity language, as either private or public contracts. Being a permissioned version of Ethereum, it is seen as the go-to technology for a number of financial institutions and a major part of the Enterprise Blockchain movement.

How to Choose the Best Blockchain Development Platform for Your Business

As listed before, Blockchain is majorly divided into two parts – centralized, where a single authority controls the network and the information which is available to the users and decentralized – where the data is shared across the complete network.

If the app deals with private information, such as names, documents, and addresses, etc. to be shared between the users, you should go with a private network which is not decentralized. On the other hand, if the app promotes business trustlessness and transparency, you should put the data on public Blockchain development framework.

What are your scalability needs?

As the transactions and participants increase, the Blockchain technology platform must also grow and adapt to this growth. Scaling issues are a big challenge in the Blockchain projects. The transaction speed of Ethereum and Bitcoin are still not as high as PayPal or Ripple, etc. If your dapp is not transaction intensive and would work well with a simple escrow agreement, you must restrict the network and vendor decision to quality, cost, and ease of use.

But if your dapp requires extensive transactions, you should examine side-chain implication for liability/security and assess network transaction fees.

Besides these two primal factors, there are some other contributing factors that a Blockchain development company considers as well when choosing the best Blockchain framework, such as:

1.  What are the best Blockchain Application Platforms?

There are a number of Blockchain development frameworks that are being used by developers for powering decentralized projects. Here are some of the most popular ones: Hyperledger, Ethereum, EOS, Corda, etc.

2.  Which are the best technology and stacks for Blockchain development?

While in terms of platforms, Ethereum, Hyperledger, and Corda are most commonly used, the developer must also have an understanding of Solidity, C++, Python language, and should understand how distributed storage like NoSQL and RDBMS works.

3.  What is the difference between Private and Public Blockchain Frameworks?