2017 was the year of Initial Coin Offering.

A variety of Blockchain centric projects got a kickstart back when the industry was introduced with a hassle-free mode of fundraising.

The popularity that ICO was receiving ever since its birth in 2017 was uncontested. Startups from all across the world were getting active in finding ways to explore Blockchain sector. Ways and Business Models that they now had found an easy way to get funded on.

The uses and adoption of ICOs were so huge that the funding industry now started drawing conclusions on how ICOs were better than VC funding and who was winning the ICO vs Crowdfunding debate. 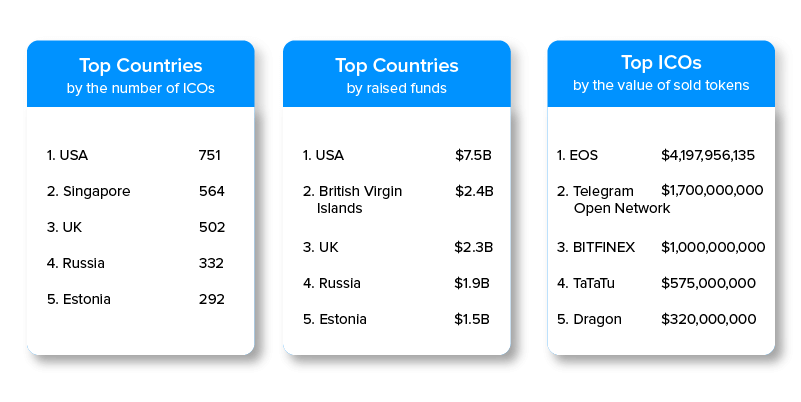 This growth spike that ICO crowdfunding now operated in, was not only seen as a great quick money-making opportunity by startups and investors but also by the spammers.

The news of what is an ICO crowdfunding, how Initial Coin Offering is the right crowdfunding model and queries around Cost of Raising ICOs soon got replaced by questions that were now raised on why ICOs are failing and if it’s even wise to invest in them going forward.

And while the Crypto world was measuring its viability, hackers continued robbing investors in name of lucrative investments.

This phase of confusion and illegal profits driven by scams lasted a whole year – till 2019 start. Then came 2019 and things shifted to a different angle. And the crowdfunding vs ICO debate saw a new entrant.

Even though 2019’s January proved to be a good month for ICOs, 2019 saw a new crowdfunding model getting resurfaced. Denoted as ICO 2.0, the model promised to be everything that ICO wasn’t. Giving birth to discussions around – IEO vs ICO and replacing the question ‘what is ICO in blockchain’ with ‘what does IEO stands for’.

And within no time, in a matter of a few months, IEO development services started getting chosen across the world for a range of different Blockchain projects and grew on to become a top ICO competitor as a model of crowdfunding using blockchain.

But does it mean that ICO process has been replaced? Is IEO development services what startups should now focus on?

Let us find an answer to the prevalent question together, by comparing both models against each other and see if ICO investment model has been replaced.

Now a logical comparison of IEO vs ICO will only happen when the pros and cons of both models are established in the open.

Let us look at the perks and disadvantages of ICO first, before moving on to the whole concept of IEO and the difference between ICOs and IEOs – Starting with the pros and cons of an initial coin offering first. 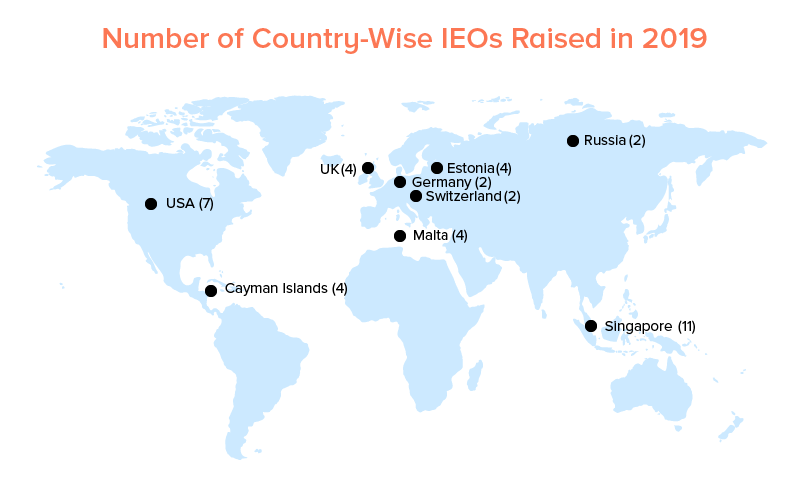 The pros and cons that ICOs come with have created a void where there is a huge scope of improvement. One that IEOs are out to fill.

What is Intial Exchange Offering (IEO)?

Initial Exchange Offering is coined in the crypto market as ICO 2.0 and there is an evident reason behind it. The core mechanism of how IEO is developed and the process of launching IEO on exchange platforms is inherently the same as the process of how you launch an ICO.

But the point where the upgrade can be seen – the point which answers what is IEO – is the platform where they are launched.

The difference between ICOs and IEOs lies in the fact that unlike ICO investment models which are launched on the startup’s website, IEOs are launched on the cryptocurrency exchange’s platform. Meaning, the crypto exchange websites like Binance, OK Jumpstart, Bitmax Launchpad, and Bittrex IEO, etc house the IEO on their website for the investors to come and participate.

How To Do an IEO

The process of how to launch an IEO is fairly similar to ICO’s.

First, you will have to start with the development of the Whitepaper highlighting the purpose of your offering, token economics, and exact benefit that your dIdea will offer to the investors and masses in general.

Next comes the development of your cryptocoin to set the base of the whole Offering part of Initial Exchange Offering.

Once you have both the above-mentioned points covered, the step of differentiation before launching the IEO will come – the part which distinguishes ICO from IEO blockchain.

You will have to look at the platform of cryptocurrency exchange with due diligence and pitch them your IEO blockchain model – the one which they would then peruse and put up on the website.

And now everything that will follow will be taken care of by the exchange websites.

Everything from marketing to running the whole campaign will now be the exchange’s responsibility. And with just this one simple move, the advantages of IEOs become innumerable.

All these advantages when added to how fast the whole IEO launch outcome is, make it a strong opponent in the whole IEO vs ICO debate.

Pros and Cons of IEO Process

The difference between ICOs and IEOs clearly hint at an event where the later is better than the former, especially in ways that primarily matter to the funding model’s stakeholders.

With that established, let us move on to the next part of our IEO vs ICO discussion. The part where we look into the benefits that IEO offers to all the individual stakeholders.

IEO’s Offerings To Its Stakeholders

Any debate that happens on the technology comparison grounds boils down to who is able to give the most benefit to the stakeholder.

In the case of IEO vs ICO, the obvious winner is IEO. The crowdfunding model has everything that lags in the ICO operative. The cons that are embedded in the Initial Coin Offering model find an evident solution in the face of IEOs.

When we talk about its obvious impact on the stakeholders which are primarily involved in Blockchain-based crowdfunding models, the positive role that IEOs play cannot be ignored.

Let us look at all the stakeholder-by-stakeholder wise impact of Initial Exchange Offerings.

With a reputed exchange backing the IEO process, investors no more have to spend their time in the verification process and KYC/AML or deep diving into knowing how to launch IEO.

Also, they don’t have to get involved in the whole studying of conditions for project investment, think of the ways to buy the startup tokens or conduct the legal and economic verification of the startup or developers.

The biggest problems with ICO is the fact that it is very difficult for investors to know who the organizers are behind the Blockchain project. Meaning, there are greater chances of them becoming a victim to hacks and scams. But the exchange support that IEO comes with makes the whole crowdfunding model absolutely secure.

No Barrier to Entry

Usually, during the Private Sale, tokens with 50% or more discounts are bought. In Pre Sale, 30-50% discount tokens are bought and the Main Sale only 20-30% off is up for grabs.

IEO eliminates this discrimination by making it possible for all class of investors to enter at all the different investment stages.

The fact that exchanges conduct necessary checks and distribute the funds collected, increases the confidence of investors. This is the reason why a number of IEOs end in as less as 20 seconds compared to the month valuation of ICOs.

Once the IEO project is approved, it takes very less time to get them listed on the Exchange. The time and probability, which in case of ICOs are fairly slim – at least in comparison to IEOs.

When an entrepreneur invests in IEO launch, they get access to a ready-made customer base, which otherwise they would have to put in a lot of marketing efforts and money on, giving them a reason to choose IEO in the ongoing IEO vs ICO debate.

By listing the IEO on the platform, the exchange gets a series of revenue streams that include –

By listing IEOs, the exchange gets to become the center of many social mentions that link back to their platform. This, in return, help them get attention from the market, which in return contributes to their growth to a great extent.

After every IEO, the platform gets access to an exclusive token which cannot be traded elsewhere. These coins are known to attract new investors to the website who are willing to invest in a specific project. An event which in return grows the trading volumes and customer base.

With ICO under constant scrutiny from the Blockchain world especially from the investors’ side of the stakeholders, IEO has already established itself as ICO 2.0. One that is already on the verge of sweeping the ICO users from under its feet.

But does it mean that ICO is dead and that IEO is where the future of Blockchain-based fundraising model lies?

What is the Future of IEO?

Well. Yes, ICO is in fact on its deathbed.

But No, IEO is not the concrete future of Blockchain-based Crowdfunding economy because there are a number of other Blockchain funding models as well, which are worthy alternatives to ICOs.

But in a comparison between ICO and IEO specifically, IEO is in fact here to stay for the long haul.

Although, the interest that the crowdfunding model has received from investors is still comparatively low as compared to the position that ICO held when it was at the stage of nascency where IEO is today, its future is bright nonetheless.

Considering all the benefits that IEO tends to offer especially in terms of guaranteed security and high return on investment, the entrepreneurs and investors have already started jumping ships.

Being a Blockchain app development agency that has been involved in the ideation, development, and launch process of both ICO and IEO, our loyalties are also now getting inclined towards IEO. For the benefits that the crowdfunding model is offering are genuinely incomparable that what has been seen in the industry before.

FAQs About IEO vs ICO

IEO is a form of blockchain crowdfunding model where the projects are launched on crypto exchange platforms who then take care of the entire launch and promotion of the funding process. Unlike ICOs, entrepreneurs are not responsible for ensuring the smooth running of the fundraise process.

2. What is ICO in Cryptocurrency?

ICO is the blockchain industry’s answer to crowdfunding. It is the process that blockchain centric entrepreneurs follow to raise funds for their decentralized project.