POC vs. MVP vs. Prototype: The Strategy Closest to Product Market Fit

Product Market Fit – the term coined by Marc Andreessen and popularized by Sean Ellis is a marketing concept that has grown to be applied by a number of startups, globally.

The most no-nonsense way to understand its meaning is that if a product is being liked by a market which is demanding the product heavily, the product’s parent company has achieved a product market fit.

While the definition paints a picture of nothing less than a utopia, the reality is that there are very limited ways to achieve this utopia. And the ways come packed with confusions.

The major confusion that surrounds these three app viability check strategies is what separates them from each other and which one would get them closest to achieving the product market fit utopia before their competitors act on the idea.

The intent of this article is to solve the confusion and help you decide which strategy to go with to achieve a product market fit in your app industry.

But before you even get to the point of making a decision between POC vs minimum viable product vs prototype, there are a few things that you should keep into consideration:

POC vs. MVP vs. Prototype: The Concept

As the name denotes, POC (Proof of Concept) is an approach which businesses use to validate the idea or the feasibility of the concept. The stage comes into existence way before the mobile app development process starts. Here a small project is implemented for verifying if a concept can be implemented on the technical capability and business model grounds.

A mobile app POC is not usually shown to the public or the customers for the main idea behind it is to simply check if the idea is workable or not.

Prototype focuses entirely on showing how an app will flow from one screen to another and how it looks to the end users. Building a mobile app prototype is one of the most important app development processes. It uses various prototyping tools to help understand how the app flows, its usability, and what features must be added to the application. Also, building a prototype plays an important role if you are looking to get funding from investors for your mobile app prototype.

What is Minimum Viable Product? MVP is a functional app that comes loaded with the prime features that best represent the application.

The MVP development process helps in verifying the app feasibility, teams’ assumptions about the application, and its probable usability along with the market demand. When you build a minimum viable product, it ultimately helps in developing an application which is prepared to gather the end-user feedback.

POC vs MVP vs. Prototype: How to Choose The Best Approach?

The question: which is the best strategy out of the three, in itself is wrong.

In order to truly achieve a product fit, entrepreneurs cannot choose between the strategies. They will have to either choose one of the strategies, depending on the stage of their application or would have to see them as steps.

Let us explain both the points in detail.

Scenario 1: When you are yet to enter the idea validation stage

When you haven’t started with the development of either of the strategies, you are at a stage, which we deem ideal. A stage where you have the time to chart the app validation lifecycle. 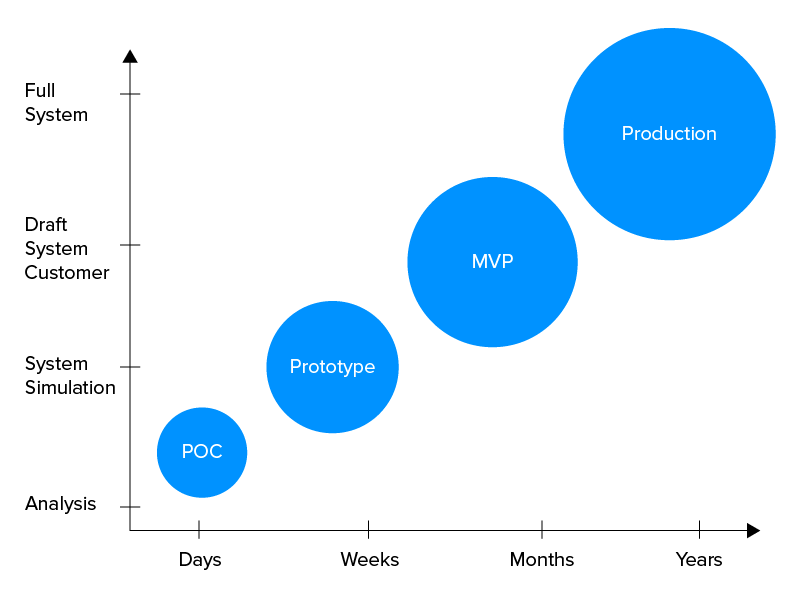 The benefits of investing in the lifecycle that starts from POC then reaches Prototype before getting to the MVP stage are manifold.

Disclaimer: Here’s how you can test your minimum viable product with various proven strategies.

2. Speedy Development: When you go with this approach, your partnered mobile app development agency work with limited features – one which have been market tested. Meaning, there is a lot to profit from in a very little time.

3. Low Investment Risk: When you develop an application that has been tested at three stages, you give the investors an assurance that it is risk free. This, in turn, translates to greater investments.

Scenario 2: When you have entered the idea validation stage

When you have already entered the idea validation phase, the probability is very less for you to follow a step-by-step process in order to reach product market fit phase. Under this scenario, you will have to make a choice between POC vs Prototype vs MVP.

And the choice will depend on several factors – ones that are enough to be converted into IFTTT scenarios.

Here are some scenarios to help you make the choice –

FAQs About POC vs. MVP vs. Prototype

Q. What is the difference between Prototype and MVP?

The primal difference a prototype and an MVP is that the latter is a ready to publish publicly version of an application, while the former is more of a version that is there to test the idea within the internal stakeholders of a company.

Q. What is the difference between a Prototype and a Proof of Concept?

Proof of concept vs Prototype is a comparison of two very different concepts. While POC is merely a set of documents or basic level software used to check the workability of an idea, Prototype is the clickable version software that give stakeholders peek into how the user would move inside an application.

Q. When to consider building a MVP app?

There are different instances where the MVP development method makes more sense compared to creation of POC or Prototype:

Q. What is the difference between POC and MVP?

POC vs MVP is a comparison between a concept and an application that is ready to be published in the stores. While the intent between both the concept is the same – to validate an app idea, the stages in which they make an appearance are very different.

A proof of concept methodology is the first stage of idea validation – a stage where a small project is implemented for verifying if a concept can be implemented on the technical capability and business model grounds.

Minimum Viable Product approach, on the other hand, is a functional app that comes loaded with the prime features that best represent the application. This is the major difference between POC and MVP.

Product development is like experimenting with a vision in mind. The process starts with placing the foundation right to create a POC and Prototype, supported by MVP. As discussed above, we have tried to erase the thin line between minimum viable product vs proof of concept vs Prototype and their role in validating a product.

The POC helps clear your doubts about the feasibility of the idea. Prototype clears the doubts about the UX design and look of the product. And, minimum viable product helps gain continuous user feedback that forms the foundation for the full product.

You can choose one or even the combination of three to beat the odds of product development failure! If you have any further inquiries related to POC, Prototype and MVP development services, you can contact MVP app development company to get started.