A Detailed Guide to Start with iOS App Development

The choice of operating system plays a crucial role when it comes to mobile app development, but the central debate has always been between Android and iOS. The choice of platform helps you define your target audience since Android rules the market with the largest global platform share whereas iOS has more loyal customers.

But that doesn’t give Android all the benefits. Before we learn how to develop an iPhone app, let’s start with why should you even think of developing an iOS app.

iOS is much faster than any Android device. The apps run much smoother without any glitch. An iPhone or an iPad has similar functioning, whereas Android phones run differently depending on the model type. This makes iOS devices easier to use.

Another great reason to choose iOS is that the App Store earns nearly more profit than Google’s Android. All the apps can be easily used in any Mac OS which is not the case with Android applications. The iOS apps can be shared with family and friends with the help of an iOS device and such a thing hasn’t been done with Android. 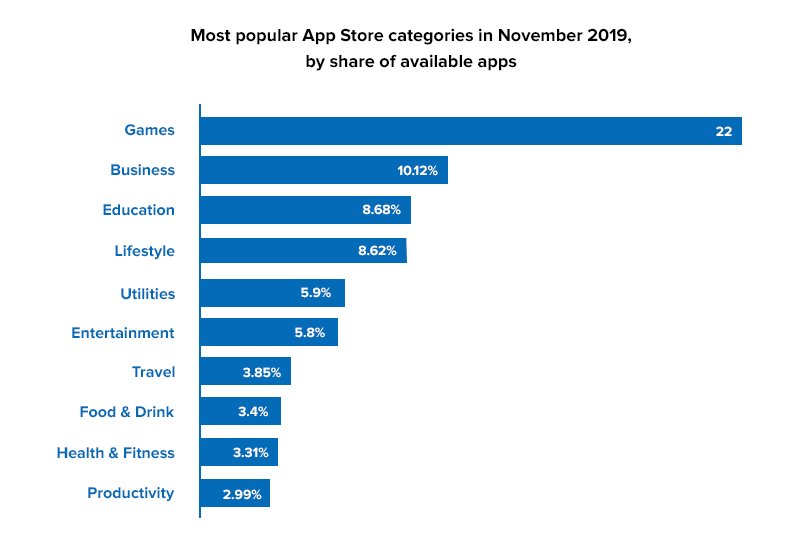 Business apps rank second to games in the most popular app categories by share of available apps. The reason is the numerous advantages that iOS mobile app development offers to businesses that helps them grow and reach a targeted audience. iOS apps improve the ROI of a business as well as maintain a high standard app quality.

What to know before developing an iOS app? 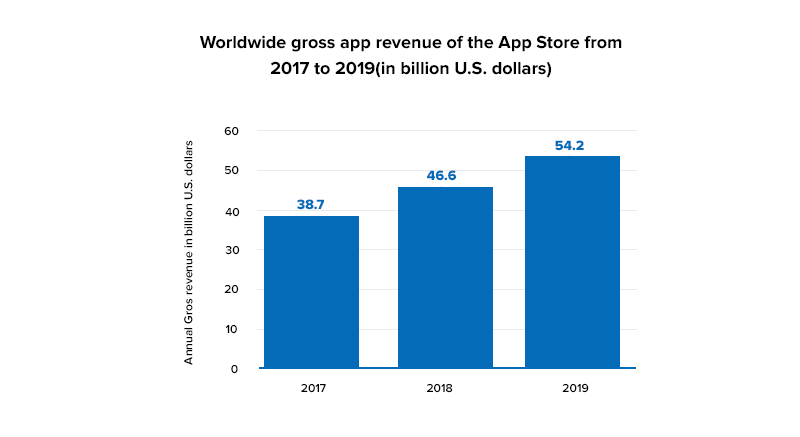 The size of these two devices vary. The aspect ratio of an iPad is 4:3 and that of iPhone is 16:9. Although the size is not that big of a factor, it does show that the iPad has better resolution since it has a bigger screen.

Designing for apps is done differently for both the devices. The reason is not only the compatibility but also that an iPad needs a higher resolution app than an iPhone. An iPad application development is done in such a way that the apps provide an enriching experience.

Before we go on to discuss in detail the best practices for iOS app development, let’s take a look at the process of iPhone and iPad application development. 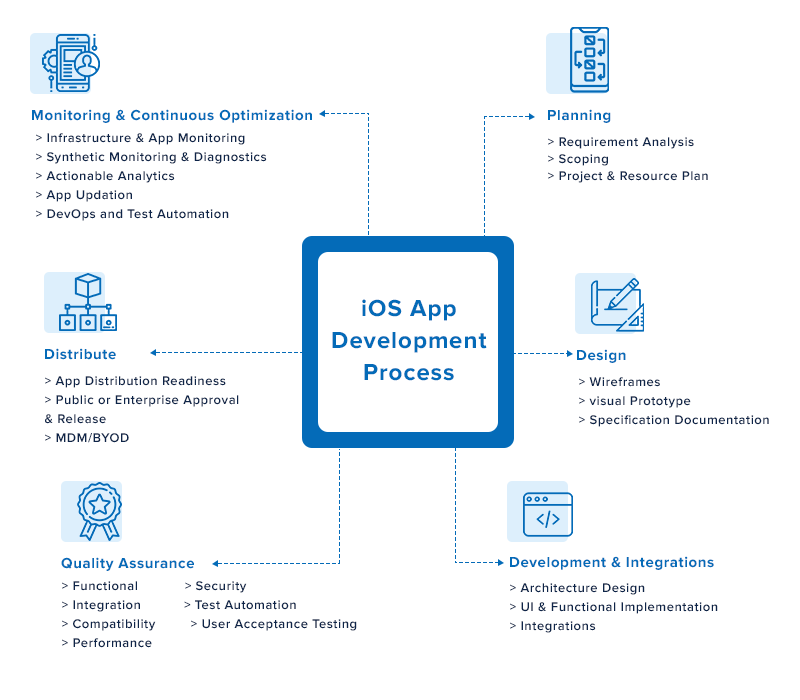 iOS development commences with the planning phase. Have a clear focus: What problems is your mobile app addressing? Who are the target users? What is the most important functionality?

A thorough market analysis is essential to ensure that the product will stand out in its market niche. The planning phase also entails arranging all requirements needed in the subsequent phases of app development.

The next phase commences with documenting the requirements for the design team. The process commences with paper sketches, wireframes and blueprints that depict how the app would look like.

The design stage lays the groundwork for the subsequent stages of developing iPhone apps.

UI and UX Design is a key phase of the process, determining the user experience and how the app will come to life. At this point, the goal is to create designs that are visually appealing as well as easy to navigate. The app’s UI and UX  should also comply with Apple’s guidelines.

If you have been wondering how to build iOS apps this phase is where it all comes together. The development phase primarily is about transforming the idea behind the app into a million users’ reality.

During this phase, the dev team works with three different yet crucial parts of the project- the back end, the API and front end of the application.

There are various developer rules defined by Apple. Therefore, iOS app developers need to incorporate the elements and best practices needed to deliver a private and secure user experience.

Post completion of all phases of technical development of the app, the next phase is quality assurance or rigorous testing of the application.

Testing the iOS app is a key aspect of the process, since it can be one of the reasons behind app rejection when submitted to the App store.

The developers need to review the device for optimal performance, smooth user experience, debugging, optimum memory use, privacy and ensure it is in thorough compliance with all Apple guidelines.

After rigorous testing and review, the app may be submitted to the App store for subsequent review and approval.

It may take a few days to a couple of weeks for Apple to get back and approve your mobile application.

The process doesn’t end once the app is deployed. With the launch of an app, commences a continuous process of app maintenance. This entails tracking the usage of devices through app analytics tools, assessing the performance through KPIs, patching any technical and security bugs that might occur at any time, and updating app functionality in the light of customer feedback and iOS requirements.

Whether you are a beginner or a skilled developer, tips and tricks come handy for everyone. So, here are a few tips to keep in mind while designing and developing iOS apps:-

Planning is a crucial part of any project and without proper planning things can go haywire. Let’s begin with a list of ‘What to know before developing an app?’. Also, decide whether you want to develop iPhone or Pad apps.

Once decided, set the purpose of the application. The Apple users are habituated to high performing and usable apps, therefore, the iOS app developers must know how to develop iPhone apps with good performance.

Keeping a simple design will make the work less complicated. Of course, the designs can be changed as the experience and confidence level of iOS app builders, but for starters, it is advised to try some simple designs. However, you can still maintain the uniqueness of the app by making a design that is easy to use yet unusual. Tinder app is one such example where the feature of ‘swipe right’ is unique and at the same time simple.

The level of your coding experience decides how convenient you are with app development. However, Apple minimized the difficulties with iOS 8 and Swift programming language in 2014. Swift Programming Language is powerful and easy to understand programming language for iOS and it is fast, safe and interactive. It helps iOS app builders to develop iPhone and iPad apps using a Mac program called Xcode which is often used by iOS app development companies.

Another best practice to consider while developing apps for iPhone or iPad is a great user interaction. Amazon has one of the best user interactions allowing easy use of the website and the mobile app at the same time. The ease is such that a user can place an order from the website and can make the payment through the mobile app. A good app developer must know how to create iPhone apps to optimize content on apps and websites.

5. Compatibility with all iOS version

Many users still use the old versions of iOS. If the applications are not built such that they are compatible with all the versions, the app may lose a margin of users, and hence will not be profitable. This also goes for any reliable iPhone app development agency because the clients will get less traffic if an iOS version doesn’t support the app.

The Facebook messenger app is a good example. It is compatible with all versions of iOS. The app looks great on an iPad as the UI is rich. Facebook continuously updates the app for the newest versions of iOS.

Mobile applications are designed to be functional, practical, inexpensive and interactive. As the iOS app developers make improvements in the app, an extra feature can be added known as social network integration.

It is an interactive marketing method which helps build strong relationships with consumers and helps in garnering more attention. Adding a marketing feature in the app comes under iPhone app development best practices. This also helps in targeting where the audience is coming from and helps in the promotion of the app.

One of the most important factors of any mobile gadget is the battery. In common occasions, high-performance processors will devour a greater amount of energy resulting in a low battery in a short period of time. Most iPhone app development services don’t take any measures to save the iPhone battery life which makes users dislike the app soon.

It is also a must to test the application before the final launch. Because if the application fails in any way when a user is using it then it will create a negative impact on the downloads of the app.

When it comes to focus upon developing iPad apps, the answer is not very different from that of iPhone app development. The few differences between an iPad and iPhone development are resolutions, calling features and rich design. For iPad app development, it is important to keep in mind that the screen is large so the richness of apps must be maintained.

A positive and functional mobile application will surely direct a quality traffic to your business.  As a result, it’s your obligation to stay all set with as many approaches as feasible to respond to your traffic instantly.

If an app is getting heavy traffic due to sale, offer or rise in demand, it should not crash. The application should be able to handle the rush and engagement at the same time.

10. Price and promotion of your app

The cost to make an app can be calculated on the basis of the development time and the type of features. You can go for in-app purchases so that users can buy additional features for the app.

Promotion of the app is crucial for success. After all, so much effort has been put into the process of app development for iPhone and iPad.

Here’s a quick detour: How to choose the right pricing strategy for your mobile app

We hope these iPhone app development tips were enough to answer your question on how to develop an iPhone app as a beginner. But in case of any more queries, feel free to contact our iOS app development experts. We will happily guide you further.

Q. What do I need to develop iOS apps?

Though the reason might vary from person to person, most people look ahead to iOS app development because the App Store earns more revenue than Google’s Android.  Along with rendering a seamless experience, iOS platform is far more secure and faster than Android.

Q. How do I start iOS app development?

When it comes to developing iPhone or iPad apps, there are various things you must know before stepping into the development environment. This includes the size of the application, the designing requirements, calling opportunity, compatibility with other apps, and more.

Q. How do I make an iPhone app for free?

You can learn how to develop an iPhone app with certain softwares that allow making apps with design templates sans coding. But for a robust iPhone app development solution that will fulfill all your business requirements, it is ideal to connect with iOS app experts.

Q. What coding language is used for iOS apps?