Sharing the direction in which the Apple App Store Statistics data is moving is the tech giant’s January tradition.

Every year, Apple shares statistics on its performance in terms of the revenue they are generating, how profitable the year had been for the iOS developer community, etc.

And like clockwork, this year too, Apple published a report on the platform’s performance, which when analyzed showed a picture of stable growth.

Now apart from those data, we have assembled a set of other Apple App Store Statistics as well that proves that the growth tangent that the platform is on, is enough to bring Apple’s yearly P&L statement up.

In this article, we will be looking at the Apple App Store Statistics 2018 that proves how far the brand has come when it comes to becoming a valuable part of the millions of iOS device users’ lives.

Let us look at the Apple App Store Statistics from the number of apps in the App Store in 2018 – 2019 to their state of app download stats and the overall revenue that they are able to generate for the tech brand. 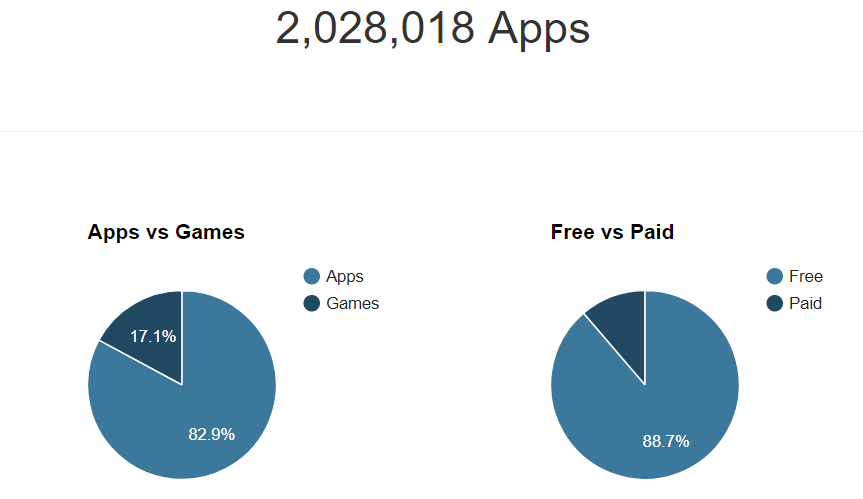 2. The present average number of app releases every day is close to 2540

Seeing the various business benefits that the App Store has to offer in terms of increasing the mobile app sales statistics, a number of brands – new and established are expanding their service to the Store for the million of Apple users – an event that has brought in an influx of demand for iPhone App Development Companies, globally.

Because of this app store trend, the number of app releases made on an everyday basis has reached to 2540 valuation. 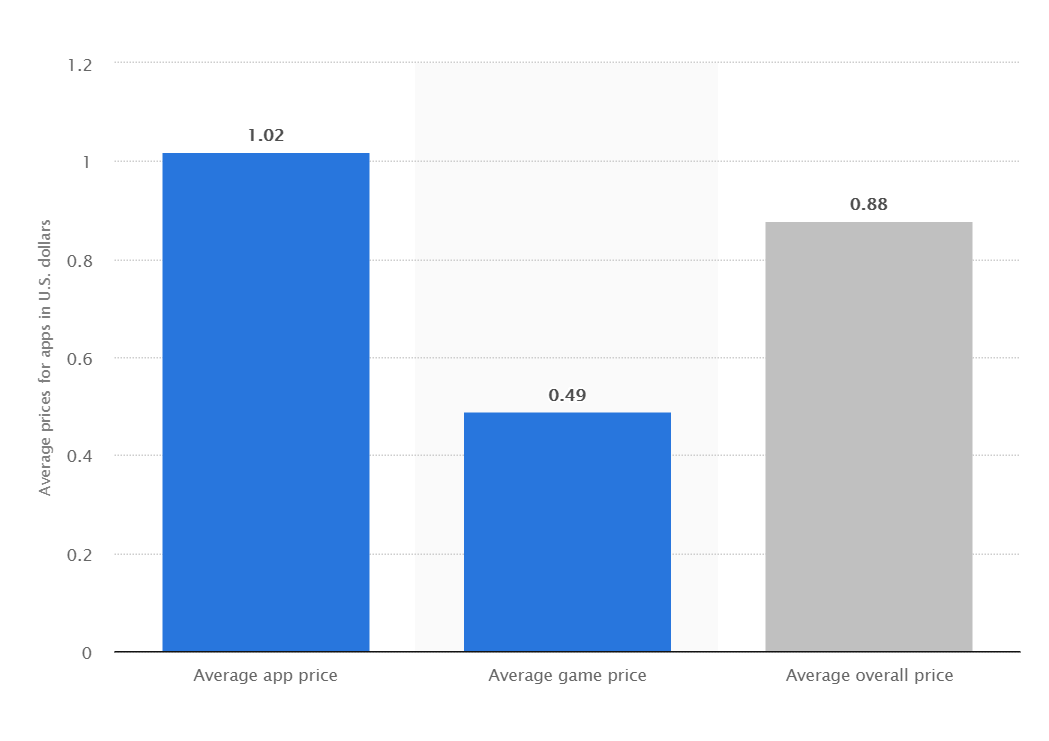 The Apple App Store Revenue in just H1 2018 is computed at $22.6 Billion, which is double the revenue that Android generated through Play Store. 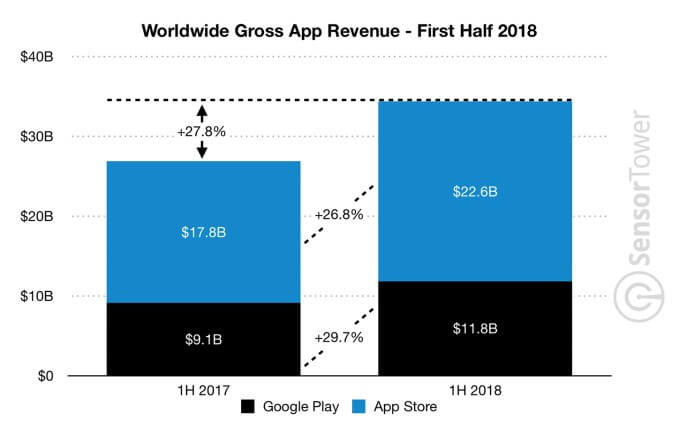 At the back of App Store domination in terms of generating high revenue for the developers (with the reason behind why iPhone developers earn more being evident), the number of publishers who have become a part of this app store trend is 500,000.

7. Between January and June 2018, iOS app developers have earned over $100 billion from the App Store

The profit spree that Apple is on has rippled down to the platform’s app developers as well. Just half year in 2018, iOS app developers have earned more than $100 Billion from the Apple App Store as app revenue statistics that they have launched on the store and which have been accepted extremely well by the users.

The brand has paid developers over $86 billion since 2008. If that’s 30% of Apple’s take – an estimation, given new payout rates for subscriptions – the App Store grossed about $88 billion in sales.

8. The amount Apple paid the iOS app developers was more than 30% of last year

The amount of revenue that iOS app developers have been able to generate in terms of revenue in 2018 is over 30% more than what they earned in 2017. A data that is hinting at growing purchasing ability from the end users’ front.

9. 81% of iOS Users Have the Latest Software Update

While App Store continues to fall behind Play Store when it comes to the mobile app download statistics, within the platform itself, the number of downloads between 2017 and 2018 has shown a rise of 10.6%.

11. There has been an increase in the mobile app download stats by 75 percent since the launching of Apple Watch

App Store has been witnessing a growing trend in demand for apps to be used through Apple Watches. This data is a sign of how the users are expanding beyond their smartphones for being active on their favorite apps, along with brands exploring the way for developing and marketing an App Watch app.

Here are the app categories that are topping the App Store in 2018. The latest TikTok statistics confirm that TikTok is the most downloaded app on the App store. 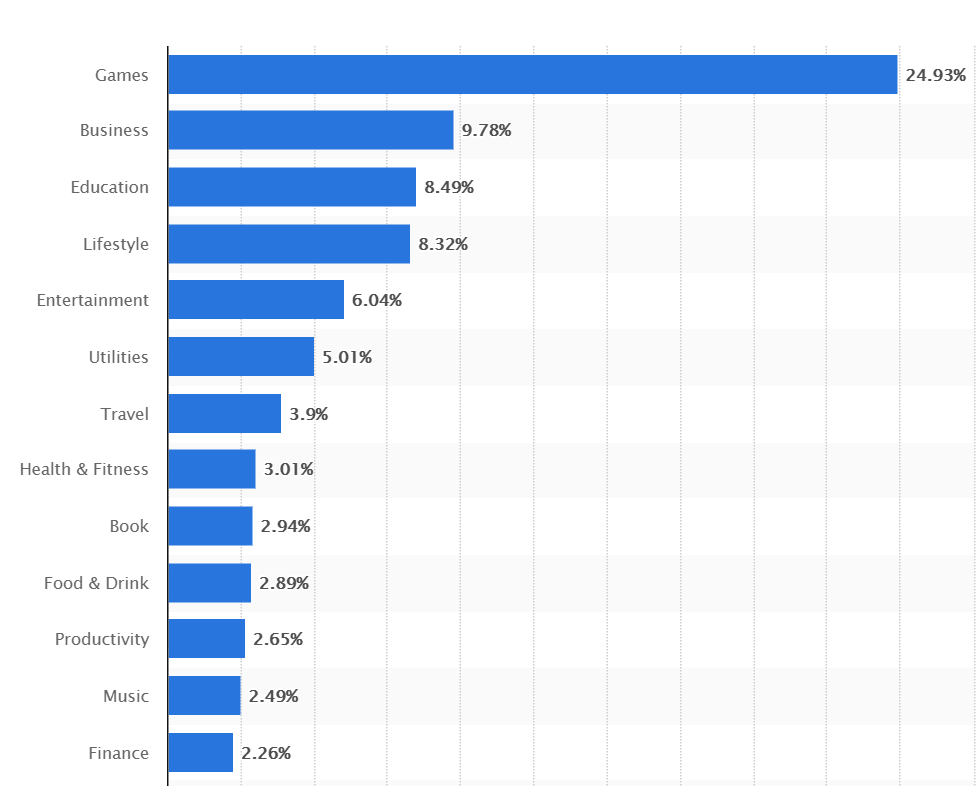 Subscription based apps are finding themselves in the middle of an uprising demand from the millions of app users on the Apple Store. The trend that was started by Netflix is what has led to a number of other businesses entering into the segment with their subscription based apps. And the demand for these apps is so much so that they are playing a very huge role in the app sales statistics chart of the App Store.

Wish to join the growth tangent that the app category is on? Know how much Netflix like subscription app development would cost. 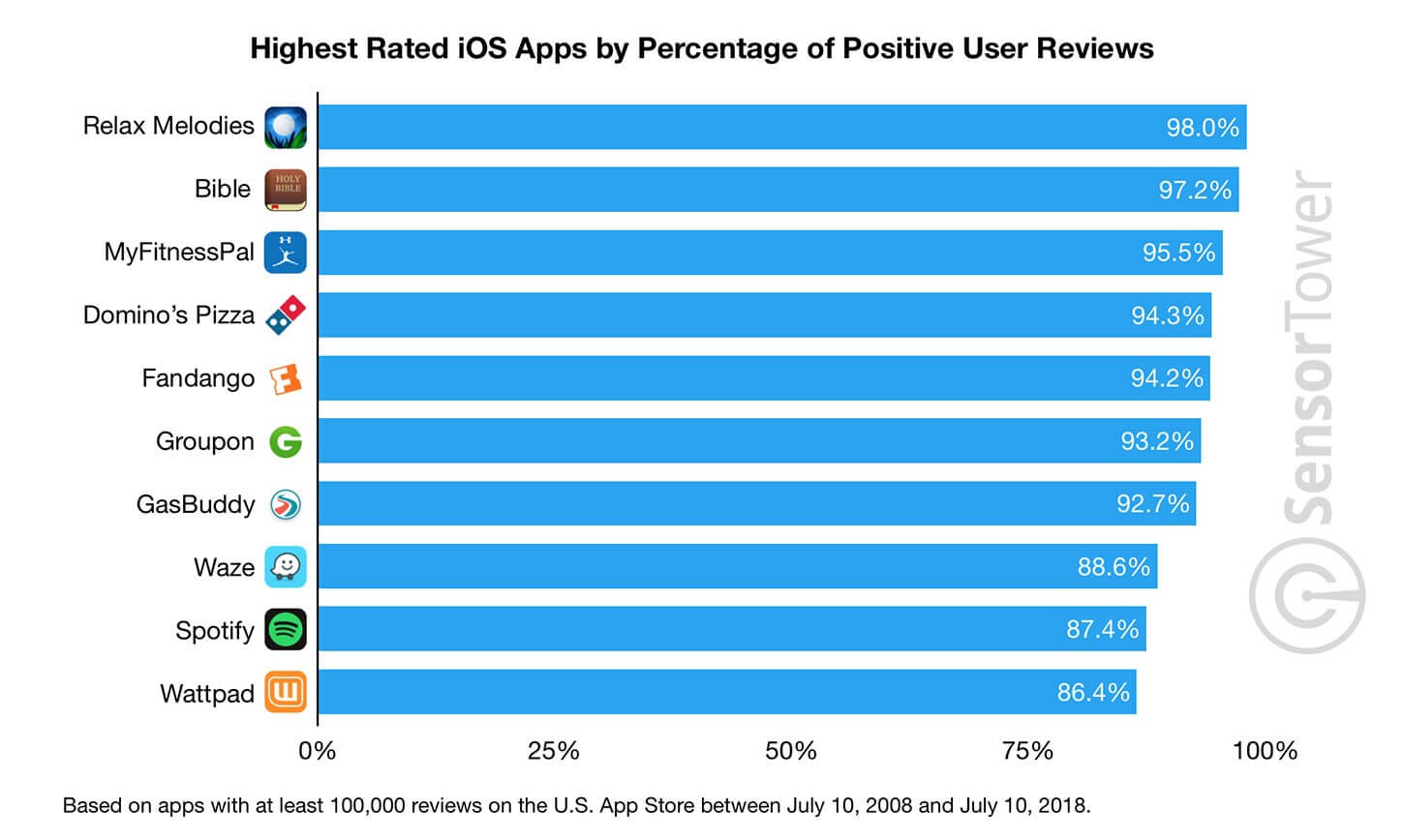 The effect of iOS 11 app store redesign is proving to be long term with the store witnessing over $300 Million in-app purchase statistics in the month of January itself – a number that was followed after the last week of December collected $890 million in purchases.

Even though Apple Pay is not available around the globe, the payment mode counts for 90% of the NFC transactions happening in the areas it is operational in. In the US, Apple Pay is the most widely accepted payment method followed by Google Pay, Paypal, Masterpass, etc.

17. Out of all the apps in the App Store, there are 316,424 that have a rating and over 1 Lakh that haven’t received a single rating from the users

While the Internet is filled with articles on how to increase the star rating of your app, the store has a different story to tell. Not every app on the store has a rating and yet they are all operating side by side with the apps that have the ratings. 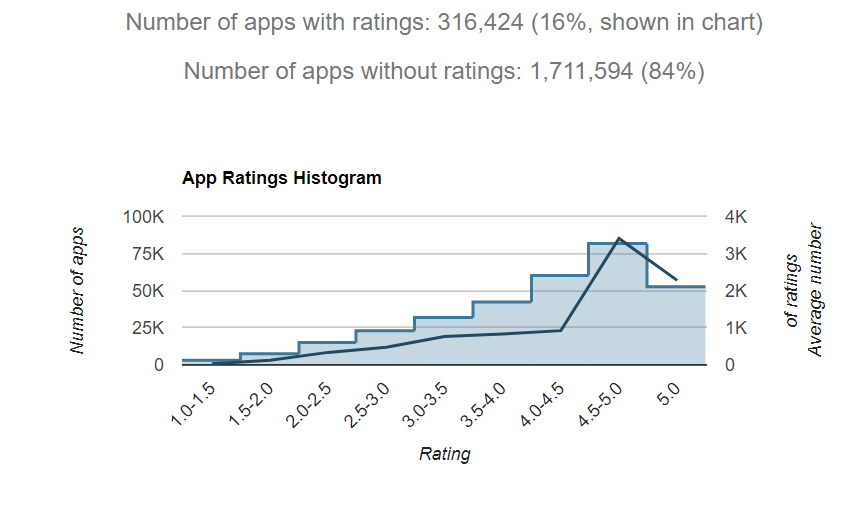 In terms of visitors of the App Store, the weekly count is presently standing at 50,000,000.

While Apple is competing neck to neck with Android in the AR department, the number of apps on the App Store made using ARKit is a lot more than apps made for Android Play Store using ARCore.

In March 2018, ARKit apps saw over 13 Million installs from the App Store.

20. ResearchKit and CareKit are Getting Used in Clinical Trials

Till date, over 500 doctors have used the platform where over 300 million people participated in the clinical trials. The conditions included in these clinical trials are – Parkinson’s, Autism, and Physical Therapy, amongst others. 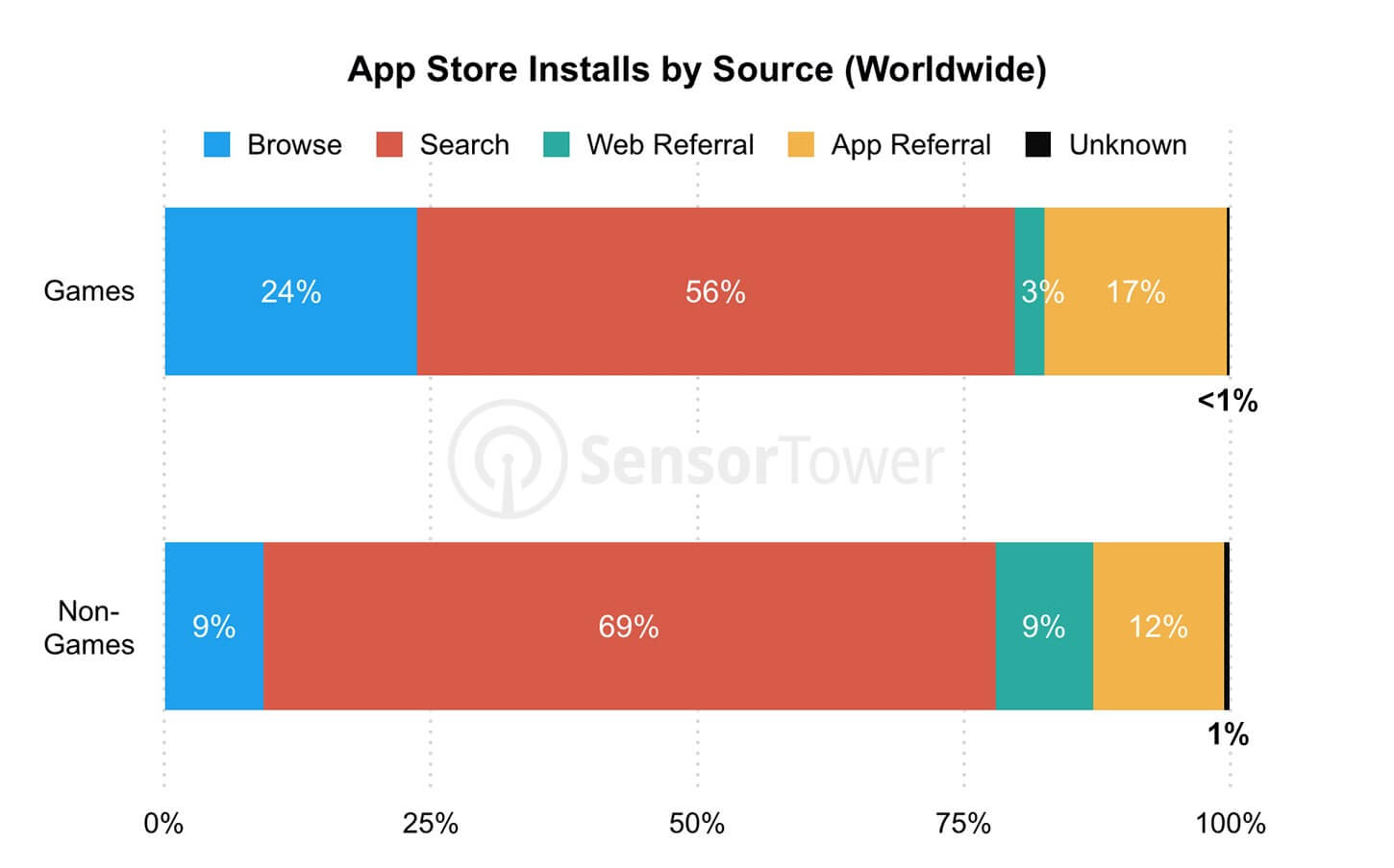 22. Since its redesign, App Store is seeing 500 million weekly visitors

Apple redesigned its App Store last September around the time of iOS 11 Launch and ever since the event, the visibility count of apps have grown by manifold.

Apple has revealed that over hundreds of stories published on App Store’s section – Today tab – are getting read by more than 1 Million users, globally.

24. iOS 11 App Store has Increased the iPhone app Download Statistics of Feature Apps to more than 800%

25. Apps that are getting featured are not restricted to the big names

Proving itself to be an app that fosters equality and gives equal opportunity for brands to showcase their quality, the featured apps section of Apple is made up of not just small time apps but also of big shots.

Now that we have looked into the Apple App Store statistics of 2018, it is now time to look into how 2019 has moved so far.

Even though we are only 6 months down in 2019, the statistics that the Apple App Store are showing are seen to be taking a positive turn.

Let us look at what all have happened till now, significant enough to be added in the list of Apple app store statistics 2019.

A. The number of people who have downloaded a game from the App Store is on a high

On average, 1 billion people have installed a game on their iPhone devices to date.

B. The average number of App Store Visits has Increased

The number of people who are visiting the Apple app store on a weekly basis is standing at 500 million.

C. The probable App Store user spending number is in

It is projected that 2019 will end with Apple App store user spending $56 billion.

$322 billion is the amount that was collected by the Apple app store on 1st January 2019.

Apple has created walls of standards around the App Store. And if any app, no matter which parent company it belongs to, lacks from even a single point, faces rejection or removal from Apple, almost instantly, which is not the case while submitting app on Play Store. What is worse is that most often than…

How to Get Million Downloads On Your App

With the immense amount of competition on both the Google Play Store and Apple Store (over two million and counting), convincing the users to install a new app is very challenging. How many times have you heard people say that no matter how innovative your idea is, only those rule the stores and users’ devices…

7 Actionable Tactics To Get Into The AppStore

Today’s smartphone market resembles a lot to someone who is ready to be a part of any workforce. To be very particular about the apps, it’s the dream of everyone to get their app noticed by Apple or Android. It’s the same scenario as in the case of any job aspirant looking forward to submit…