Blockchain technology is progressively taking over the business world. The technology was once considered to be confined to bitcoins. But with time, it has proved that bitcoin is just the tip of the iceberg; the potential of the technology is beyond decentralized transactions and even our expectations.

The Blockchain technology revamped several industries, including Real Estate, Healthcare, Education, and Legal industry to name a few. It opened new doors of opportunities and profit for the entrepreneurs and established brands. However, the most surprising application of Blockchain is in the mobile app economy.

Wondering what is the need of Blockchain technology in the mobile industry? How can Blockchain revolutionize the world of mobile applications?

The mobile economy is undoubtedly growing rapidly and is expected to be of worth $6.3 trillion by 2021. The app stores are jammed with millions of apps and both the app developers and users are getting access to better facilities. However, despite this exponential growth and technological innovations, the mobile application development economy is still facing various issues which cannot be overlooked.

Major Mobile Economy Concerns and How Blockchain Technology Can Solve Them

Alike other centralized systems, the mobile economy also involves various intermediaries between the mobile app developers and users. These entities help in discovery, distribution, and financial transactions but at the same time, deters transparency. As a result, we face situations like security threats, inaccessible in-app purchases, data leaks, and malware-plagued downloads which not only have an adverse impact on the user experience but also affect the mobile app performance and ROI.

As we saw in our Entrepreneur’s Guide to Blockchain, the technology, with its decentralized, distributed and secure ledger feature, has the potential to revamp the way app economy functions and make the end user experience seamless and enticing. If applied correctly, blockchain can tackle the following major concerns related to mobile app economy: 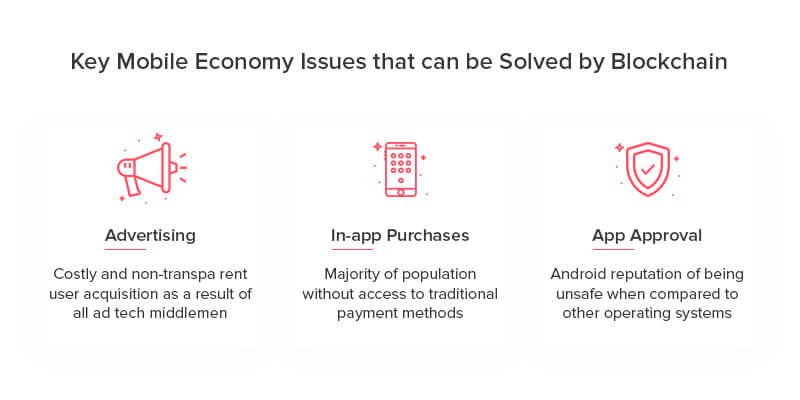 With Google and Apple’s app store being the duopoly, the current app approval process is completely handled by them. They decide which mobile app will be published on their app store and which not, based on various non-transparent quality assurance processes and distribution policies. This not only makes the process cumbersome and time-consuming but also increases the confusion among mobile app developers in case of app rejection. On the flip side, less transparency app approval process raises the risk of distribution of malware-plagued apps by the users, and thus, lesser security in the app market.
With the introduction of Blockchain technology into the process, the app approvals can be made universal and transparent through a developer reputation system. The reputation system will be directly linked to the financial transactions on the public ledger and will be available for investigation all the time (as you can see in the image below). Besides, various means will be employed for identity verification and users will be empowered to create rankings for the mobile app developers and the apps they create. 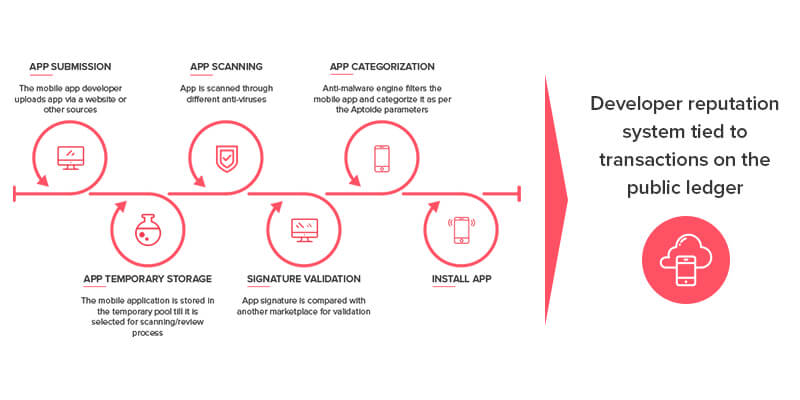 This will streamline the app approval process and help the smartphone users take the decision of downloading the app based on the ranking (see the image below), which will ultimately build trust, enhance security, boost downloads, and uplift app revenue. 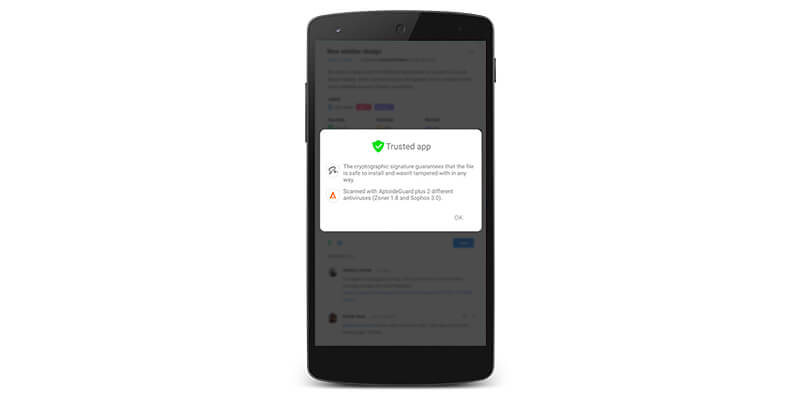 According to Statista, there are more than 2.8 million apps in Google Play Store and about 2.2 million apps in the Apple’s App Store. To reach the target audience and enjoy the limelight, the mobile app developers have to invest in CPI, i.e., Cost Per Installation campaigns. These campaigns are non-transparent and overpriced, which makes the situation shady and risky.
Moreover, as you can see in the picture below, the profit gained by the mobile application developers from the advertising is divided and shared to middlemen because of which the developers get much lesser earnings than expected. 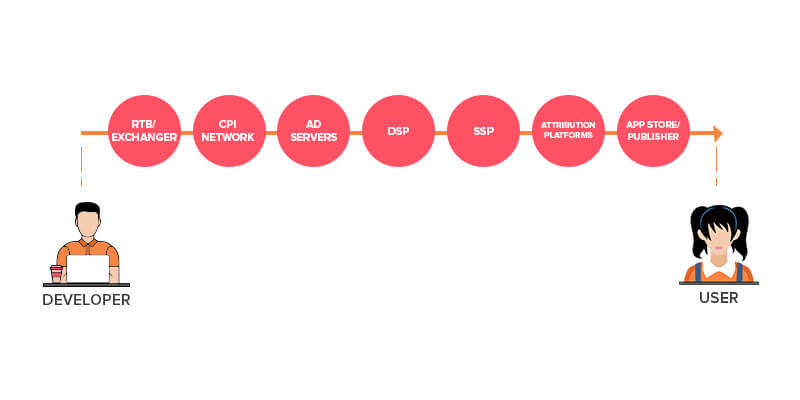 Blockchain technology can reinvent the advertising method by eliminating all the middlemen and establishing a new CPI campaign. Termed at CPA (Cost per attention), this campaign will let the mobile application developers directly reward the users for spending time on their mobile app (as you can see in the image below). 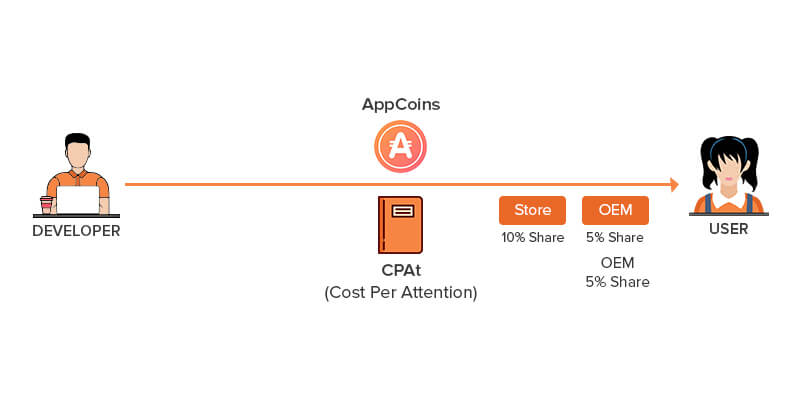 Blockchain technology, in the form of Smart contracts, will allow the developers to examine if the users spent required time on their app or not. Apart from this, the technology will let the users store their earnings in wallets and use to buy in-app items efficiently.

A recent report by We Are Social and Hootsuite revealed that nearly two-thirds of the world’s population uses a smartphone now. However, only 2 billion of the mobile users have access to the payment methods that are necessary for in-app purchases.
Apart from this, according to the traditional app in-app process system, the user pays to the app store, deal with the bank transfer fees, credit card fraud cases, circumstances of chargebacks, and so on. Then, the mobile app developer receives the payment from app store going through the same hassle. The consequence is that neither the end users are able to enjoy the perks of in-app purchase nor app developers are able to get the best out of their app monetization strategy (check the image below). 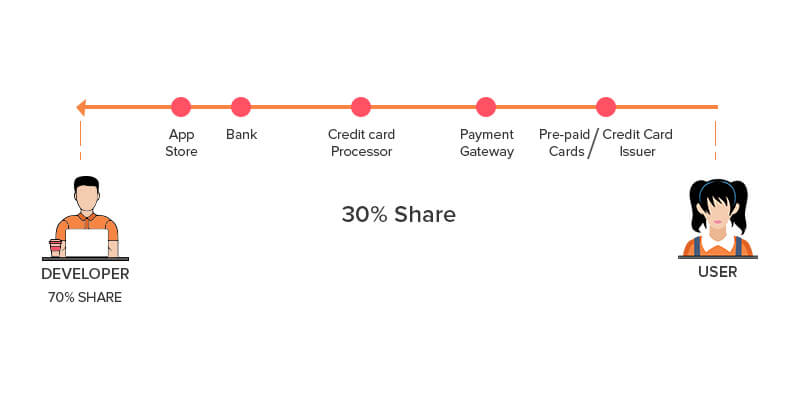 Blockchain technology will let the mobile app users use and spend their CPAt reward even in the absence of credit card and other such payment solutions. In addition to this, the Blockchain will empower mobile application developers to get 85% instead of 70% of transaction value by eliminating the middlemen (as shown in the image below). 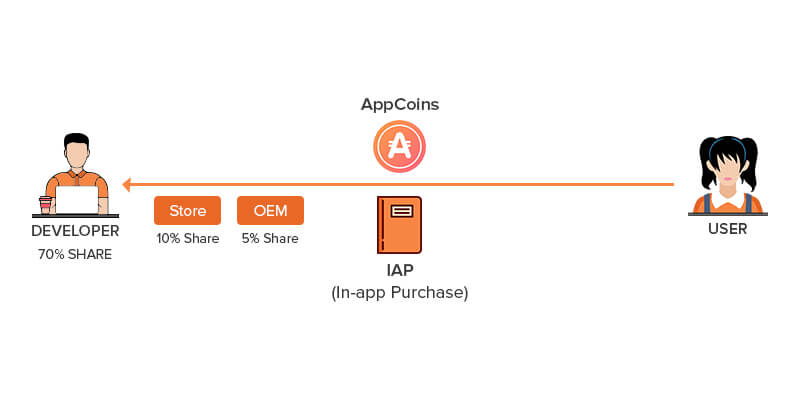 Other Applications of Blockchain in the Mobile Industry

By gathering DNS entries on a decentralized secure platform, the blockchain technology empowers the app developers to keep the whole domain records under their control – no one can alter the entries without their consent.

By investing in Blockchain app development, the app developers will be able to authenticate devices as well as users without asking for any password. Its network decentralization feature will help create consensus among the involved parties for the authentication of Blockchain based SSL certificates. This will ease the transaction process and again, boost trust among the two involved parties.

The Blockchain technology, though in its initial state now, will redefine the mobile app economy and offer the opportunities to the mobile app developers and users that they have been waiting years for. The technology will solve the three major concerns associated with the mobile economy, will build a trustable and transparent connection, and provide an open-standard platform where all could communicate and add value to the mobile world.