How to Get Angel Funding on Your Mobile App Prototype?

Prototyping, in the modern day mobile app design and development world, has become a crucial element of the whole process when we look into a guide to Mobile App Design.

This integral place that Mobile App Prototyping holds, straight from the stage when the foundation of the mobile app development is laid, is what has made it a source of generating funds from the investors as well.

Now before we move to the stage where we discuss the steps of getting Angel Funds on your Mobile app prototype, let us first look at the different obvious but still less talked about Benefits of Mobile App Prototyping.

What are the Benefits of Mobile App Prototyping?

By developing the interface, interaction, and images in a prototype, the stakeholders get to see and interact within the app, which then helps them to gauge if the app should be developed further.

Prototyping is the first step of getting validation from the end users and stakeholders in terms of the app idea and conceptualization.

When rolled out to a pool of prospective users, the method is crucial for gaining insights into how the app would be accepted later in the market. A prototype can get the marketers a series of information around the ease of usage, the need of having a walkthrough for explaining the functionality of the app, understand how the users are interacting with the app, etc.

A prototype is what gives the investors the validation of the product’s profitability and its potential to reach the market. By demonstrating the exact flow of the app along with the functionalities that will be present in the mobile app, prototypes become a looking glass for the investors to ensure that the app would work and is prepared to attract a huge user base.

Irrespective of which traditional or non-traditional funding models you are planning to go with, mobile app prototypes can play a huge role in getting you closer to getting funds.

Prototyping is more or less the only part of the mobile app development process that gives you the freedom to make changes and do A/B testing.

The end result of an app prototype can go two ways – A. the Idea might be absolutely perfect (a rare event) B. There might be changes which would get highlighted after studying the user experience on the prototype (a common occurrence).

Now, if your business falls in Category B, prototyping is the only stage that will give you the time and space to work on an alternative to change the route of your mobile app development process.

Since we have now looked into the various benefits that come attached with the development of Mobile App Prototyping, let us now look at the options you have when it comes to the type of available Prototypes.

What are the Types of Mobile Application Prototypes?

Depending on the requirement of a business, prototypes can also be divided into two parts –

When we talk about Prototype Fidelity, we are mainly talking about how the look and feel of the product are portrayed to the stakeholder. If there are a number of intricate details, the prototype will be put into the High Fidelity Mobile App prototype demarcation and likewise, if the product is only a basic, ready to test portrayal of the app, it is called a Low Fidelity Mobile App Prototype.

What is Low Fidelity Prototypes?

Lo-Fi Prototypes are a fast and easy method to translate the high level design modules in testable and tangible artifacts. The main object of a Low Fidelity prototype is to first check and then test the app functionality and not the app’s visual appearance. 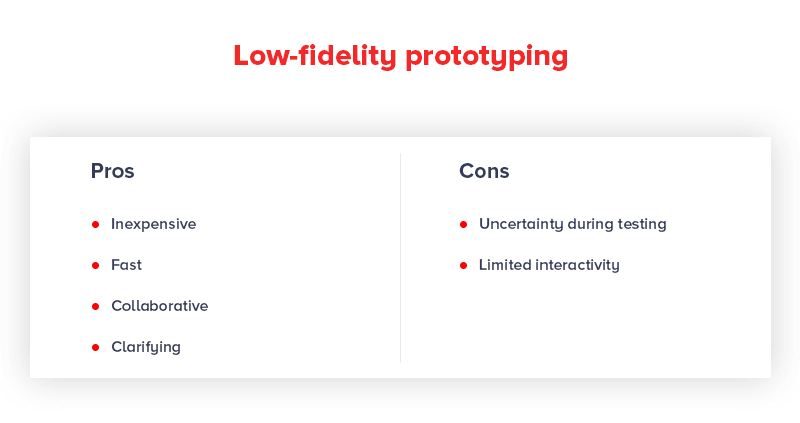 Here are the basic attributes of a Lo-Fi Prototype –

What are the High Fidelity Prototypes?

Hi-Fi Prototypes look and functions very similar to the product that will be shipped in the market. Mobile app development companies usually develop a high-fidelity prototype after they have gathered a clear understanding of what they are going to develop and when they need to test the app with the users or send it for generating funds from the investors. 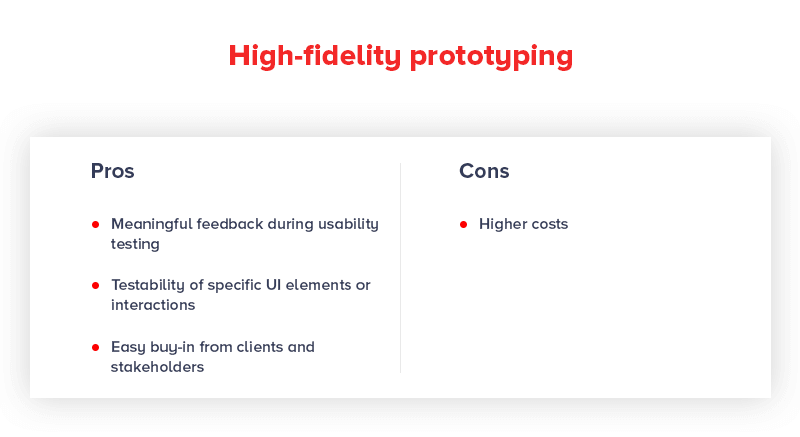 Here are the attributes of the High Fidelity Prototype –

Now comes the next and most crucial part that stands between you and your dreams – How to Create an App Prototype.

In this section, we will be looking into the right way to create an app prototype, which would give a product which can be shown to the investors.

What is the Mobile App Prototyping Process?

Freedom
The first step of Mobile App Prototyping starts with identifying the problem that the users are facing in the market, specifically the problems which can be solved with a mobile app. The process to go about is lies in a number of preliminary research methods such as Interviews and Surveys.

Now what usually happens is that the problem that businesses think are prevalent are very different from the root cause. And it can all only be identified by talking to the users in detail.

The next stage of how to develop a mobile app prototype is Concept Mapping. In this stage, we help map out the various data that we have collected through mapping.

The development of a concept map starts with first identifying the main issue faced by the users. Once you have identified the main issue, also known as the ‘Focus Question’, start with listing down all the related data that you have.

Next, with your main concept on top, start organizing all the related data/information hierarchically, i.e. according to broad to specific.

The idea of a concept map is to help create a user flow that would define what a user would seek to achieve through the app movement. This user flow then goes on to help with the creation of mobile app features.

Once you are done with the creation of concept map and user flow, make a list of features that you believe users would need to move from point A to point B within the mobile app.

Divide this process into two stages – A. Noting down all the Features and B. Refining the list of Features.

Stage A is pretty self explanatory – list down all the features that come into your head, without thinking of its viability. Stage B is where you refine the features list. In order to do it perfectly, measure the features against these processes –

Now that we have finalized the features, the next and close to the end stage is to create a Storyboard.

Storyboard helps in the creation of a layout of how the user would fit in and work around the app in his day to day life.

Once your storyboard is ready, the next and last stage left for you to cover is to create a prototype and test it among a pool of real prospect of users.

Now that we have looked into the perks of investment in Prototype development along with the different options that businesses have when it comes to Mobile App Prototype Development, let us now move on to the last and most important segment of our article – How to get Angel Funding on your Mobile Application Prototype.

How to Get Angel Funding at the back of your Mobile/ Web App Prototyping Process?

The first and foremost step for getting funds on your mobile app prototype is the creation of a Proof of Concept. The idea is that you get your Prototype validated from the pool of real users and collect their positive responses and experiences to then share with the Angel Investors.

Nevertheless, there are three ways to find Angel Investors for your Mobile App

Generally what happens is that the Angels keep aside money for angel investments, which are screened over by the team of managers. This way the investors get to keep their anonymity. There are different Angel Investor Networks available across nations like if you are looking to start your mobile app development in Chicago, you can connect with Cornerstone Angela and Hyde Park Angels for the funding requirement.

If you are hoping to find and impress an investor in some meetup or fundraising, good luck. It’ll hardly ever happen. So instead of wasting your time in signing up to each and every meetup with the sole aim to find an Angel Investor, study the brands that gave funding to your competitors and then contact their competitors.

Open an account and create a strong business presence on websites like IndieGoGo, Kickstarter, RocketHub, and Fundable etc. Now, although it is no hard and fast rule, generally it has been seen that those entrepreneurs generally get greater visibility whose profile is filled with numbers and media. So think about creating your app’s demonstration video.

Once you have found a list of Angel Investors who might be interested in your venture, it is time to send them an email pitch. Make sure that you are highlighting the Proof of Concept in the email. 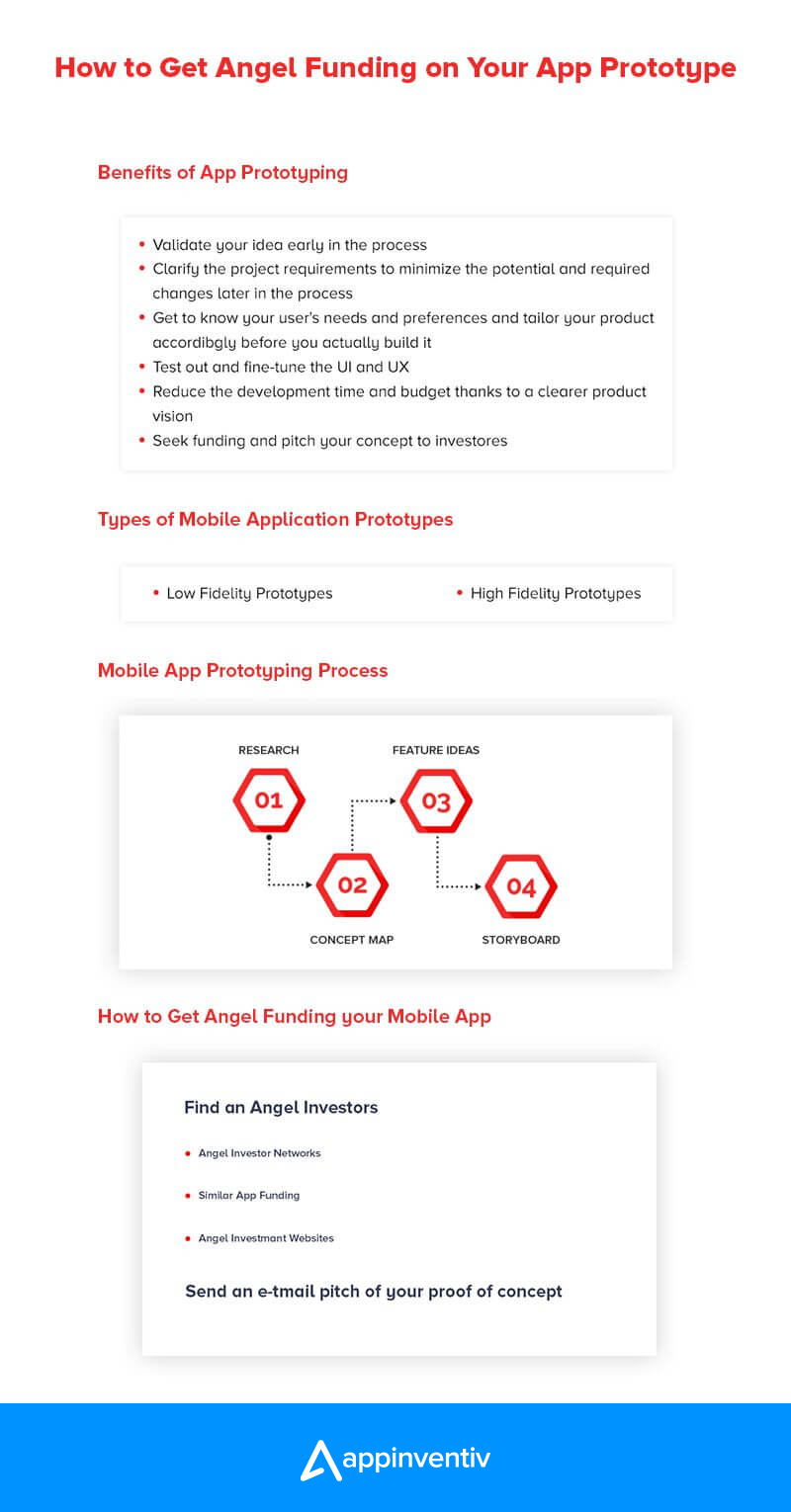