Meditation, yoga, and good sleep have become an inevitable part of everyone’s lives to ensure good health, considering the amount of stress we deal with at the workplace and in our personal lives every day. The outbreak of the pandemic has undoubtedly added to the stress we live under.

All this considered, it’s no surprise that the demand for meditation and mindfulness apps is growing every year. These apps make it easy for users to get into that meditative zone and relax their brains. A few meditation apps also add the element of gamification to attract users and divert them from self-destructive thoughts.

This increasing popularity of meditation apps is also attracting more and more businesses to enter the industry and earn a good sum of money.

In this article, we will be sharing a few important meditation app statistics 2022 that will blow your mind and help you understand why this domain is perfect for investing in.

So, let’s get started!

1. The number of searches for yoga and meditation apps increased by 65% y-o-y.

People have begun to realize that they need not sell their Ferrari, become a monk, and live on the Himalayas to live a de-stressed life. They can experience calmness and peace within while spending a few minutes on a meditation application.

This has not only increased the number of talks in the academic and media world, but has also shown a huge rise in the number of online searches related to yoga and meditation apps.

According to Google, the number of searches for yoga and meditation apps like ‘yoga for beginners app’ and ‘mindfulness apps’ increased by 65% between 2019 and 2020.

From curbing anxiety to relieving stress, improving concentration power and enhancing energy, users are using meditation mobile applications for numerous reasons. A result of which, according to mental health app statistics is that 52 millions of meditation mobile app downloads were recorded in 2019.

This has not only indicated that users are loving the idea of using smartphones for lowering down their anxiety, but is also encouraging entrepreneurs to connect with a trustworthy wellness app development company to enter the space and get a bigger slice of the share.

4. More than 2,500 meditation mobile applications have been launched since 2015.

With users soaring the mental health app usage to pursue tranquility, it is also leaving an impact on the number of apps entering the market. It has been discovered that around 2,500 apps have been launched in this market between 2015 and 2020.

5. The top 10 meditation mobile applications generated a revenue of $195 million.

As per Statista, meditation app Calm generated a revenue of approximately 119.19 million US dollars for its premium features and functionalities. Headspace saw approximately 86 million U.S. dollars in consumer spending during the same year. Meditopia, launched in 2017, saw an increase by 180 percent in consumer spend between 2019 and 2020, reaching almost 134 million U.S. dollars in app spending in 2021. 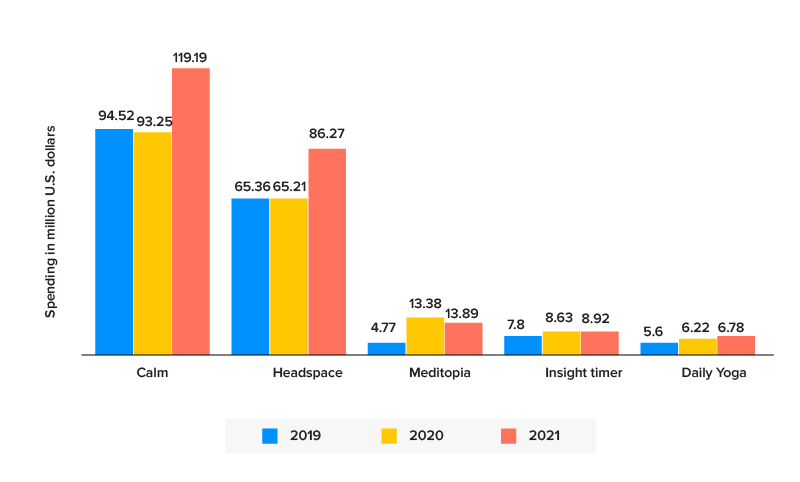 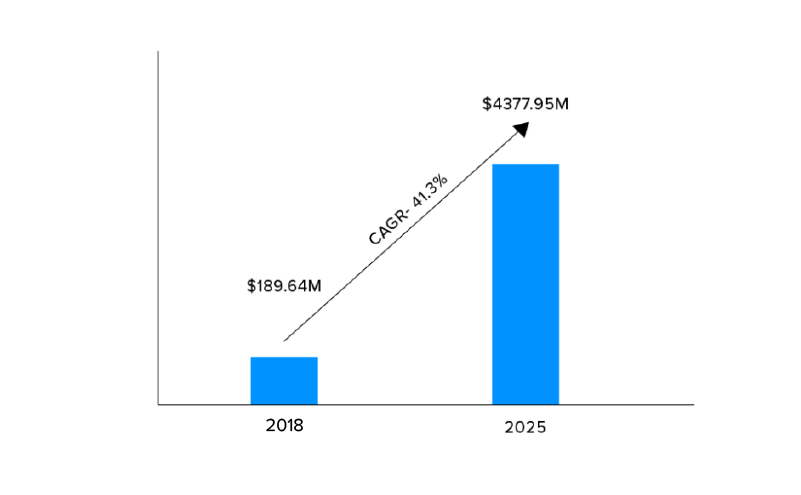 6. North America is the leading market for its meditation apps, exhibiting a CAGR of 5% by 2032.

With a majority of Americans practicing meditation on a regular basis to relax and unwind, North America is continuing to be the prime center for the meditation app market. 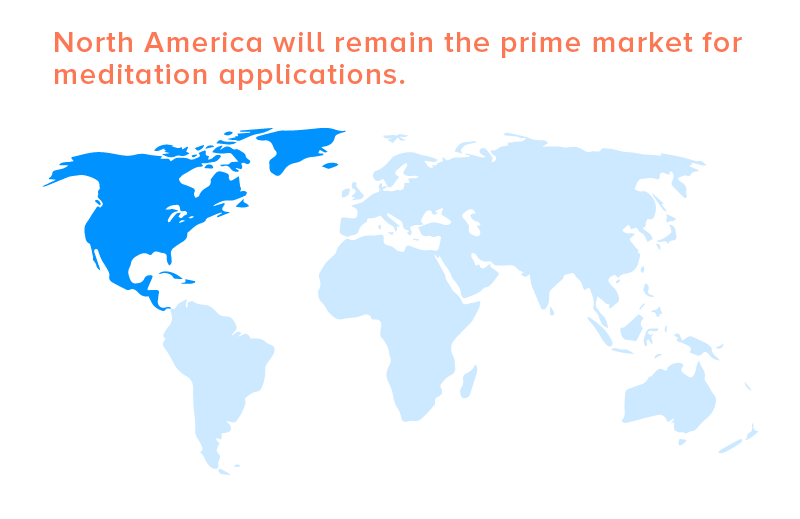 So, considering the citizens of North America while creating user personas for your meditation application will be a profitable deal.

One of the intriguing meditation app statistics to consider in 2022 is that the number of users in the US who have meditated at least once has increased by 3x between 2012 to present. 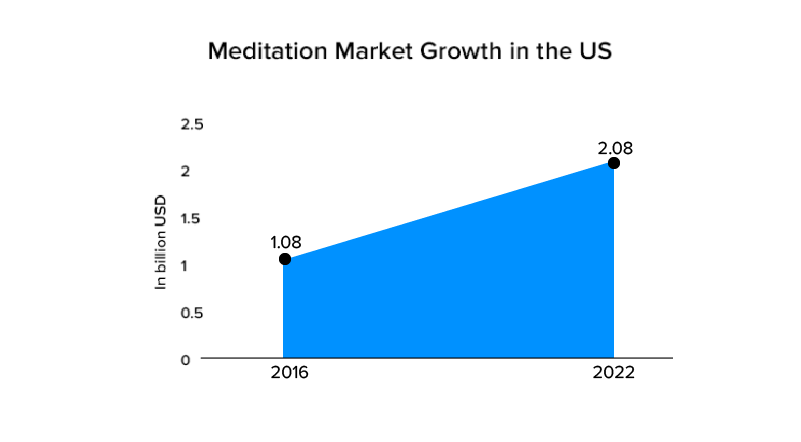 According to mindfulness facts and statistics, American users are found to be spending heavily on these meditation applications, which earn money by subscription and other such monetization strategies. In fact, it has been found that the US self-care app market will be worth $2.08 billion by the end of 2022. 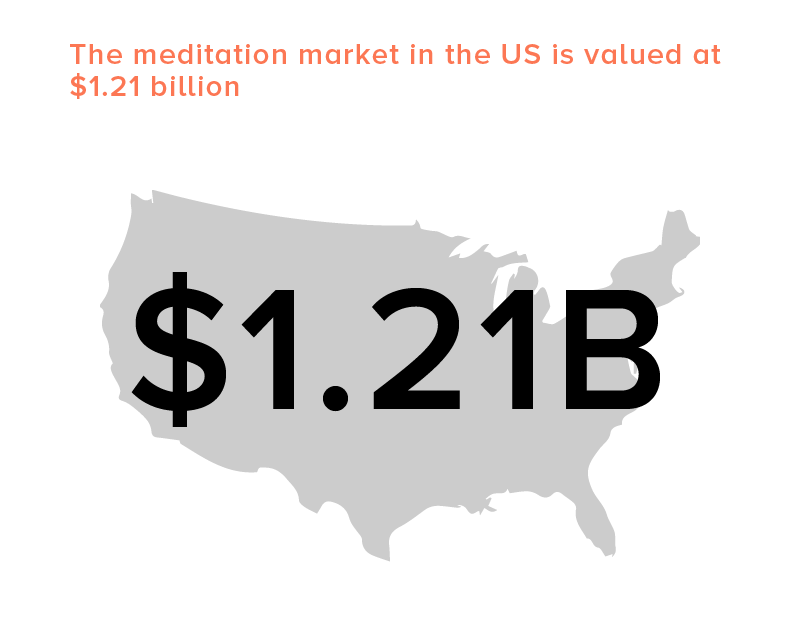 10. Meditation apps are the most purchased health app category in the US

As per Statista, 34% of the most purchased types of healthcare apps in the US are meditation apps. This puts meditation and mindfulness in the third place, just behind nutrition and sleep tracking apps.

11. iOS is preferred over Android in the self-care meditation app market.

The battle of Android vs iOS has remained prevalent in the world of meditation mindfulness too. It has been found that though the number of apps designed on both platforms is increasing, iOS is leading the game.

12. Android is forecasted to drive a revenue of USD 74 million by 2029 in the meditation app market.

Though iOS is preferred over Android to enter into the meditation app space, the latter is driving more downloads and revenue. It has been found that USD 74 million will be generated by Android meditation applications by 2029, more likely because of advertisement and other such bankable monetization strategies.

[Also Read: How much does Android app development cost?]

13. 53% of US senior citizens meditate at least once a week.

One of the mindfulness facts and statistics worth considering in the US region is that though everyone is practicing meditation weekly, people of 65 years and above are devoting more time. 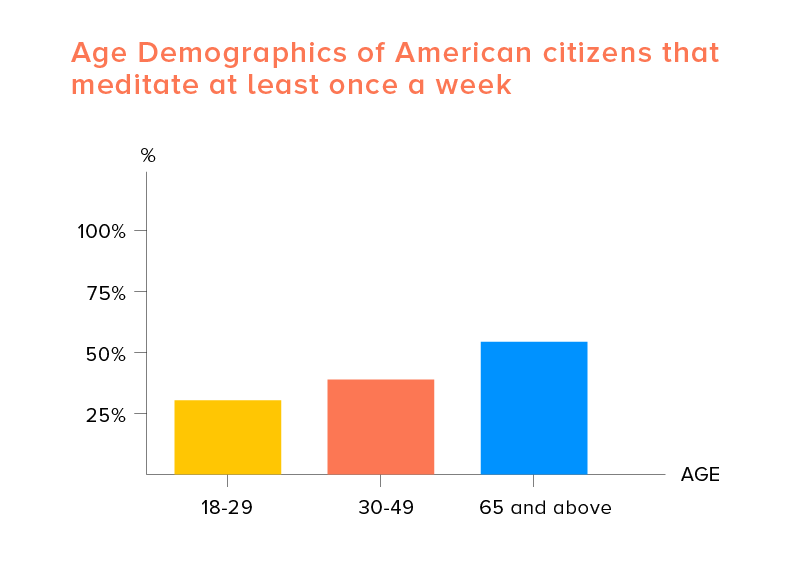 It’s true that the senior generation is meditating every once a week, but it should be  taken into account that the number of children getting into this direction is also increasing. The ratio has  surged by 800 times since 2012. This may be basically due to an uncertainty and instability of their future, and round-the-clock stressful schedule.

15. Women are meditating regularly, in comparison to men.

Another important meditation industry statistic to consider while focusing on the demographics of meditation app users is that 16% of females perform meditation. Whereas, only 12% of males are doing so.

Apart from the functionality of experiencing calm and peace in the midst of chaos, users are focusing on various other features while deciding which meditation app to choose. This includes an option to keep track of their progress, experiment with different practices, enjoy audio and video playback, and more.

So, considering these features while planning to build or taking an estimate of the cost of developing a Headspace-like app is also imperative to relish higher benefits of the meditation app market.

Various technologies are proving to be a catalyst towards revolutionizing the future of mindfulness apps. One such technology is virtual reality.
The technology is enabling users to visit different destinations and environments virtually and improve their mental health. An outcome of this is that the VR-powered meditation market is anticipated to expand to USD 3.9 billion by the year 2023.

18. Headspace and Calm are the rulers of the meditation mindfulness app market.

As per Sensor Tower’s report on the top meditation apps globally based on the downloads and revenue generation, Calm and Headspace are the unrivaled platforms.

This has further brought into notice that developing an app like Calm or Headspace is ideal to make your presence in the mindfulness meditation application market.

19. The Headspace application is used in around 190 countries.

Headspace, the leading meditation app, is available in nearly 190 countries.

20. US users invest 63% of their total time on InsightTimer.

Another meditation app statistic 2022 one should know is that though various apps like Headspace are a part of users’ daily activities, they’re found to spend a majority of their meditating time on InsightTimer. 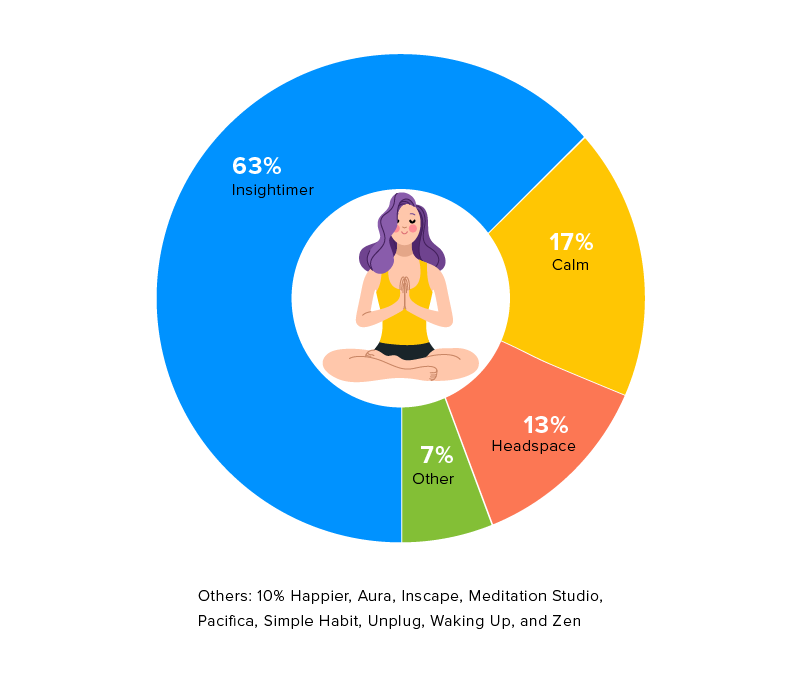 A probable reason behind this is that InsightTimer is quite cheaper and brings users closer to an active community of people like them.

Unlike offline meditation courses and classes, apps let users pick the time duration as per their convenience. This has not just led to the rise in meditation apps market popularity, but has also brought a difference in the data recorded in terms of the price they are ready to pay according to the time duration of meditations. 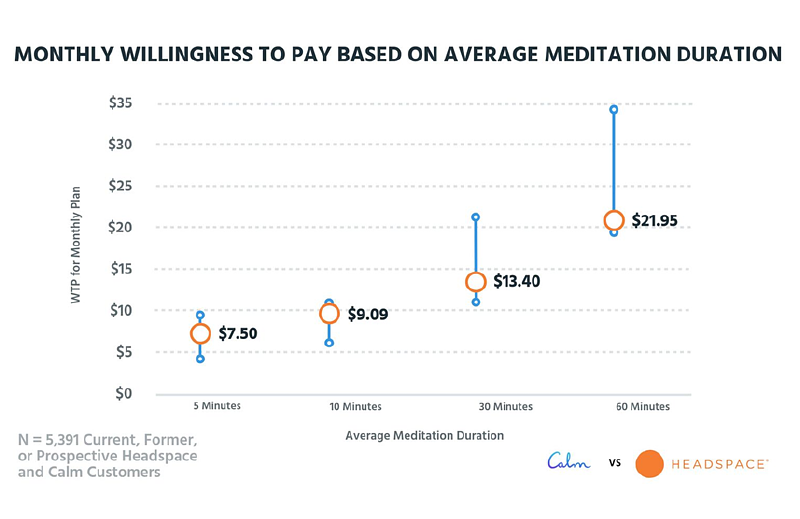 22. Users are spending money on subscriptions for Calm and Headspace apps for different purposes.

Users are ready to pay different amounts as monthly subscription rate for relishing different benefits on Headspace and Calm apps, such as building relationships, de-stressing themselves, and enhancing athletic performance. 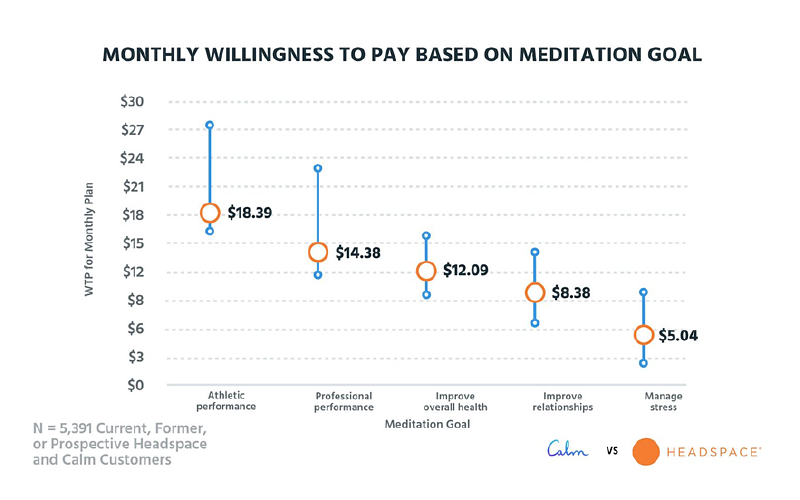 23. Users are eager to pay different subscription charges for Headspace and Calm apps as per meditation frequency.

A variation is observed in data in terms of the frequency in which users meditate using these applications. It has been found that users are more likely to go with the application that lets them practice meditation for more than one time daily under the same subscription plan.

24. Calm’s annual market potential in California from private senior homes will be $23.4 M.

Since senior users (especially those retired) are spending more time on meditation mobile applications, Calm has introduced new services as per their needs and expectations. A result of which is that Calm’s annual market potential in California from private senior homes is expected to be around $23.4 million, with an additional $158.8 million from all private or semi-private retirement homes in the US in the coming few years.

Seeing these meditation facts and statistics, it is quite evident that the mental health development market is exploding like never before. Various new brands are investing in this domain, wherein many meditation mindfulness industry trends and technologies are taken into account for driving higher competitive advantages. This is making both business enthusiasts and users excited to know what will unfold in the future.

At Appinventiv, we have developed many apps for our users. We have a highly skilled team of app developers who have mastered the technologies that are needed to develop top-notch healthcare and meditation apps.

So, in case you also have some interesting app ideas on your mind or want to uncover current meditation app trends, feel free to contact us. Our experts will offer trustworthy medical & healthcare app development solutions and bring your idea to life.

Q. How many users does Calm have?

A. As per the latest Calm app statistics, the app has over 4+ million paid users and over 100 + downloads.

Q. How many meditation apps are there?

A. As per the latest statistics, there are more than 2,500 meditation apps.

Q. How to build a meditation app?

A. To succeed in meditation app development, you need to follow the below-mentioned steps:

Future Of Wellness Industry Market In 2022 And Beyond!

Remember the workout tapes, aerobatics, yoga, and whatnot! Those were the times when people used to work out from home watching all those tapes and following instructions. Earlier if you met somebody before Covid-19 struck and asked them (excluding gym freaks!!) about healthy living and their views on it, odds are you probably won't get…

A Quick Guide to Mood Tracking App Development for Entrepreneurs

“Gosh, not again.” “I’m feeling anxious.” “I don’t know why I’m feeling so emotional. I want to cry my heart out”. With the increasing stress and negative emotions in our lifestyle, such thoughts have become common. People, these days, are struggling with their mood swings, which are affecting their personality and mental health adversely. This…

How to develop a Calm-like meditation app?

WhatsApp deactivated.  Facebook uninstalled.  Airplane mode on. For a long time, smartphone users have followed this approach to focus or simply live a stress-free life. They often curse mobile applications for the distraction and anxiety they face in their daily lives. But, this perspective changed drastically the moment mindfulness apps came into existence. Mobile applications…