How to Integrate Siri into Third Party iOS Apps?

One of the biggest announcements that Apple ever made was on Apple’s WWDC about the Siri API being available to developers. This new framework is known as SiriKit and it allows developers to integrate Siri into apps, making it easier to get things done.

Imagine if you can get these things done through your apps:

“Hey Siri, add flour to the grocery list in My Lists App.”

“Hey Siri, message a Thank You to Dad via Messaging App.”

This is basically all that you can achieve by integrating Siri with your applications. In this article, we will discuss how you can integrate Siri into apps and use voice commands to complete certain tasks.

Siri was developed by Apple in 2011 and it is  the first ever AI voice recognition assistant. The programming for this was done using Objective-C for platforms such as iPhone, Apple iPad, Macintosh, Apple TV, etc. This invention was one of a kind and it allowed customers to use voice commands for their mobile devices.

Siri has been loved by users ever since Apple introduced it 6 years ago but due to some restrictions, iOS app developers could not use the Siri framework for their own applications.

There is no doubt that Siri is being used by millions today and after the launch of SiriKit, it will only see more growth. Using SiriKit in iOS apps is something every developer wants to do since the voice recognition market is seeing high growth. The voice recognition market is set to hit $13.8 billions by 2023 and therefore Apple has launched SiriKit for developers.

How does Siri Work?

By now we are all familiar with what Siri is and what it does. Usually, users don’t bother about the tech behind Siri as long as it does what it is supposed to do i.e. take voice commands and execute them. But the mechanism behind Siri is quite interesting.

Siri uses two technologies: Voice recognition and natural language processing. The voice recognition is used to convert the voice command in a text form. For instance, when you say “Hey Siri”, you will see the same text appear on the screen. This is when Siri wakes up and is ready to take command.

However, this is not that easy. The language that each person uses may be the same but the accents vary from city to city. This brings in difficulty to analyse the command that Siri receives.

With the launch of SiriKit, this technology can be used in other apps as well with Siri third party app integration.

SiriKit is a framework that Apple developed recently for iOS app developers. This allows iPhone app developers to add tailor-made features to Siri which can be integrated with third party apps to achieve the best user experience. Earlier the Siri app integration was restricted to some types of apps such as ride booking, messaging, photo search, payments, VoIP calling and health, but the list is continuously increasing with the launch of iOS 12.

However, it must be noted that SiriKit does not support all the app domains. A domain is a group of things that Siri knows about. Within the domains, there are Intents which are activities that Siri can perform. Let’s say Payment is the domain under which transferring funds and bill payments are the intents.

The domains SiriKit supports are:

What Can Siri Do for you

Siri can be incredibly helpful for those who are accustomed to it. In addition to offering high visibility to business through integration in App Clips, it allows users to perform a large variety of day to day tasks on their iOS devices, such as setting reminders, etc.

In case you want Siri to be a little more helpful, ask it to do things like place a call, start a FaceTime chat, launch an app, send a message, set up a calendar event, get directions, play music, find a restaurant, etc.

With Siri compatible apps, the thing that you may find relatively surprising is the assistant’s candidness to answer, or at least the attempt to answer “human-like” questions in a similar manner.

What are the Pros and Cons of using SiriKit in iOS Apps?

Finally, Apple is catching up with Google Now, Cortana and Alexa by opening up its framework to enable Siri third party app integration. Apple launched SiriKit for developers to integrate Siri into apps, but it still comes with some pros and cons. Let’s take a look at them one by one.

What are the Pros?

What are the Cons?

What is the Market and Competition 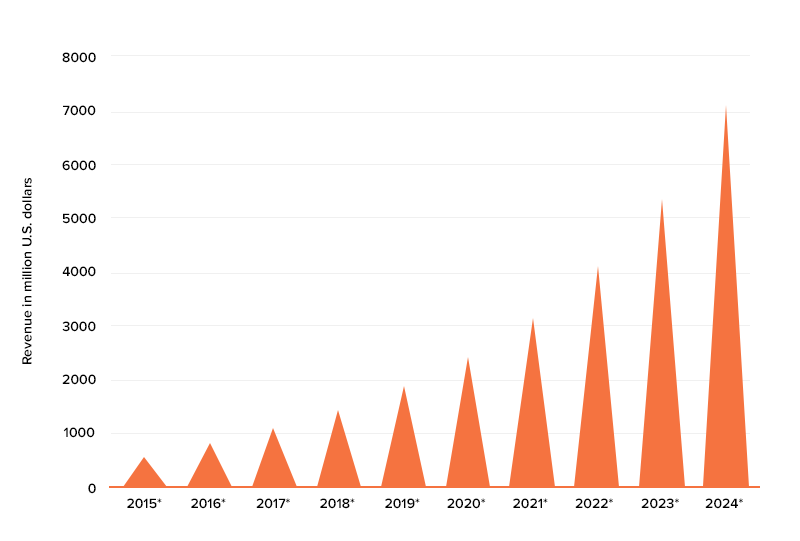 According to App Store statistics 2018, Apple has seen tremendous growth all these years when it comes to mobile apps. However, one thing Apple didn’t allow was Siri app integration with third parties which is surprising considering all its competitors are way ahead in this segment.

Apple might be a little late when it comes to letting in the third-party applications use voice recognition. The competition in this market is high with Google Now, Windows Cortana and Amazon’s Alexa. The market revenue is set to grow tremendously in the future as the chart above reflects.

The major players in the voice recognition market other than the ones mentioned above are:

With this, we end the introduction part. In the next section, we will now get into details on how to integrate Siri in your app.

How to Integrate Siri in your Apps?

We finally arrive at the answer to the frequently asked question ‘How to extend your iOS app with Siri?’. In the following segment, you will learn how to integrate Siri with your app in a very simple yet detailed manner.

As mentioned beforehand, two apps that run on their own cannot interact with each other on iOS. This is where SiriKit comes into the picture. It allows one app to interact with the other as well as share data. This mechanism is known as extensions. Siri uses two extensions for this:

Intent extension is how Siri and the application will interact with each other. It is crucial for the interaction and without this extension, Siri cannot be used.

Once the extension is added, the intents extension’s info.plist is edited to let the app know which requests to process. Developers can add further information such as category, title, description, parameters and its types, etc. This helps understand which intents are acceptable by the app.

The developers must specify the words that will allow the requests to be processed. This makes the work of the app a tad bit easier. The specified words also help the app to understand what the user wants.

That is all you need to do to run your iOS app with Siri integration. Also, make sure that Siri is enabled in the App ID to make this work. Follow these steps to implement:

Once everything is done, start your interaction with Siri and see how your intents extension works.

Some of the apps that use Siri and have already integrated Sirikit are Pinterest, Whatsapp, Trello, LinkedIn, Google News, City Mapper, Car Commands, etc.

Here are some examples of siri third party apps that have integrated SiriKit:

What is in the Future of Siri?

Keeping the users in mind, Apple recently launched its iOS 12.1 with numerous features and now they have introduced SiriKit for developers. The convenience of the voice command is a lifesaver for users and Apple is likely to add more apps to the list other than the others it already has.

These AI based voice recognition technologies are going to change the way we live in the near future. Although Apple came late to the race, it is going to catch up fast with other players. It will be a great surprise to see what else AI can do for humans.

As an iPhone app development company, this is our take on Apple’s new SiriKit and ways to use SiriKit with your third party apps. But if you wish to know more on how to extend your iOS app with SiriKit then contact our team of experts and we will get back to you.

Q. What apps does Siri work with?

While previous versions of iOS enabled only limited Siri input for third-party applications,  iOS 10 introduced a multitude of third-party apps that accept in-app control from Siri. You’ll need to ensure that Siri is both “on” and enabled for interactions before using Siri with compatible applications.