How Chatbot Development is Shaping The Business Growth Story

My mother recently booked an Air India flight through a leading travel website. After booking the flight that suited her, she got a message on WhatsApp from the site, with her flight’s PNR number: A Chatbot Application doing.

Now being a part of a company that specializes in Chatbot App Development, my interaction with the technology is much greater than what my mum has (Who, by the way, got very excited after being a little skeptical).

The reason behind her skepticism yet attraction towards the technology is similar to companies, who have now incorporated Chatbots in their service plan, once had.

Chatbot development is now no more a new concept for the world. Today, almost all the companies belonging to the Service and various other industries, having analyzed the pros and cons of chatbots, are invested in the interactive and highly profitable mechanism. The chatbot development using NLP has opened a whole new realm of customer engagement for businesses across all domains.

Naturally, what was a rising trend in 2017, Chatbots are now going to be mainstream in 2019 and beyond.

What is a Chatbot, Really?

Chatbot or Chatterbot is a computer program, which simulates human conversation through the text chats or voice commands or at times, both.
Through Chatbot application development, the software can either be incorporated in your existing application or it can also act as a standalone app like Siri.

With the definition out in the open, let us first look at the Chatbot App Development Market before moving on the industries that have successfully make them a part of their business and the working of the in high demand technology.

You’ll see nothing but growth when you sit down to do Chatbot Market Analysis. Something that was validated by Grand View Research in their recent report.

Here are the key findings from the report:

The reasons behind this surging demand for Chatbot development can be directly linked to its widespread uses in a few of the most once-traditional industries, driven by the perks that come entailed with a well-planned chatbot design strategy.

Messaging apps had already revolutionized industries by bringing them on the world’s fingertips, years ago. By becoming available on just a text distance, messaging apps solved one of the biggest issues faced by the customers and the brands: timely response.

While, the messaging apps solved a major issue, but it still had its limitations. It was not possible for customer care reps to be available on the text at all hours. A problem that now got solved with the advent of Chatbots.

By incorporating a chatbot mechanism, companies now no more had to worry about not responding to users on time, as they now always got an automated response. Performance wise, well-developed chatbot features now stood on top of all the metrics to evaluate chatbot performance, which also were synonymous to the definition of excellent customer service.

Let us look at the four industries that have already/ on the verge of adopting the chatbot development methodology in their processes:

Beside answering students’ queries and scoring their essays, Chatbot has found itself reminding students to take a lesson or to go through what they studied, again.
By taking over two of the most mundane tasks – grading and making students repeat what they learned, Chatbots are opening up spaces in teachers’ daily task sheet to upgrade the education system, globally.

One of the most evident uses of Chatbots can be seen in the Customer Service industry. Every time you visit a website or app that says ‘Live Chat’, the chances are that the one who would be replying to your query is not a human but a bot developed by chatbot companies. And it’s not just limited to website chats. With apps like Elves, you can now easily order things online, check the status of items you ordered or are out of stock by having a highly interactive chat session with a Chatbot.

Feeding emotion trigger words in chatbot application development can have customized interaction with the users, proving to be a very empathetic, efficient tool when it comes to handling mental health issues. There are even apps in the market like Nadia, which have personalized interactions depending on your tone of voice and word usage.

After customer service, the most on the most on the face example of Chatbot development services is Assistance. Apps like Siri and Google Assistant have been used by the world since a very long time now. Upon being connected with a device’s operating system, these assistance Chatbots perform a series of functions from playing music to calling someone on the user’s behalf and even booking tickets or making a search on Google.

While these are just the four areas whose Chatbot adaptation is openly there, there are many other industries like Banking, Travel, Healthcare, and News & Publishing that are getting in touch with top chatbot development companies to keep up with the trend.

I am sure it would have been established by now for why your brand need to invest in Chatbot development, let’s now look at the basics of Chatbots: Of how they actually work.

How does the Chatbots Application Development Works? 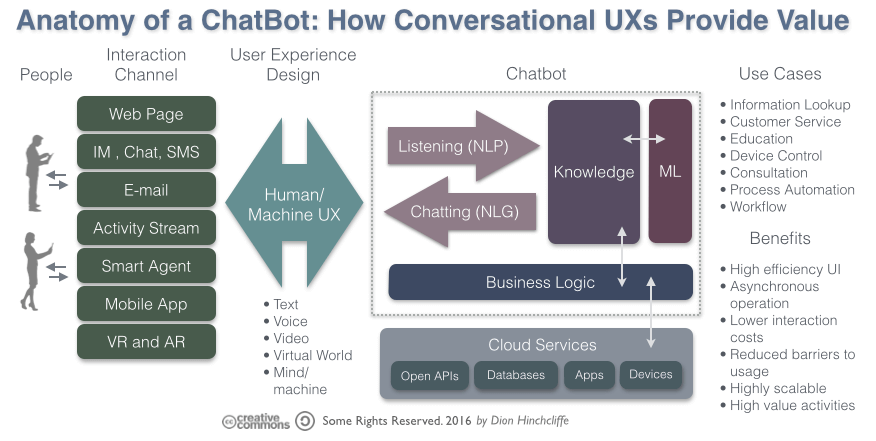 Chatbot development methodology is categorized into two groups according to the functions they serve: 1) those who work on explicit commands and 2) the ones that uses machine learning.

The first type is very simple. Bot is designed to respond to specific/ strict commands, if a user says something otherwise, it won’t be able to understand.

The second category is a lot more advanced. Chatbot app developers use a number of elements to develop interactive chatbots, like – Natural Language Processes and Machine Learning Algorithms, so they understand not just the specific commands, but also human language, as they expand their learning while communicating with the users. In short, they have a brain of their own.

One of the factors that has played a major role behind making chatbots a part of all industries’ future is – Machine Learning technology. It is entirely focused on the creation of programs, which can study and respond to previous experiences and patterns.

To make quality interactions with the users, the bot needs not only to learn how their users interact but also understand them.

Natural language processing is based on various types of machine learning algorithms, which offers language generation and language understanding. It enables users to interact with a virtual bot, not with the help of commands, but as a human.

Since you now know the types of bots available for use, let’s now finally see how to integrate Chatbot development services in your mobile app.

How to Develop a Chatbot Application?

When it comes to chatbot development, a company has two options. A. Use readymade platforms to make your bot on or B. Make it from the scratch using tools.

When using a platform to place your chatbot on, you have a number of options ranging from Slack, Discord, Telegram, Kik, and Facebook Messenger. The limitations in using these platforms are that you can only host your chatbot tools on these and not elsewhere.

To remove this limitation, companies also use chatbot development tools to develop their own chatbots that can be hosted anywhere. For that, there are a number of tools, but these are the chatbot development frameworks that we use – wit.ai, api.ai, textit.in, IBM’s Watson, and coverse.ai.

You are now set to make your customer service game stronger, with your own Chatbot.

How to Build A Chatbot with Deep NLP?

Earlier,chatbots used to be a nice gimmick with no real benefit but just another digital machine to experiment with. However, they have evolved into an indispensable tool in the corporate world with every passing year.  Developing and maintaining a chatbot is, of course, a time, effort and money draining job. Yet, compelling businesses, new and…

How Much Does it Cost to Develop A Chatbot?

The modern-day business world has found a number of uses for chatbots. From increasing the user engagement count to play a major part in the lead conversion process, chatbots have entered the world across industries. The fact that chatbots are equally famous among baby boomers and millennials, increases the user base of the technology to…

48% of global consumers accepted that they would rather connect with a company over chat than any other source of contact. 35% of the users would like to see more companies incorporating chatbots. As for the business side of the story, chatbots save around £6 billion per year and a simple chat option in the…