We have entered into a glorious year for the mobile application sector. The number of new applications entering the space, across genres, is at an all-time high while the competition between Android and iOS has maintained its cutthroat intensity.

While the result of this competition has been a great user experience for the users from both sides of the operating systems, app entrepreneurs also have reasons to rejoice. Statista has researched that mobile application revenue count will reach $693 Billion counts in 2021.

A key reason behind the growth that the platforms are witnessing is the doings of constant improvement that both the OSs are coming with.

In this article, we will be looking into the list of iOS app development trends that we can expect from the successful OS in 2021 and beyond. But first, let’s reinstate the constant success of Apple and iOS through the point of view of its users’ count. 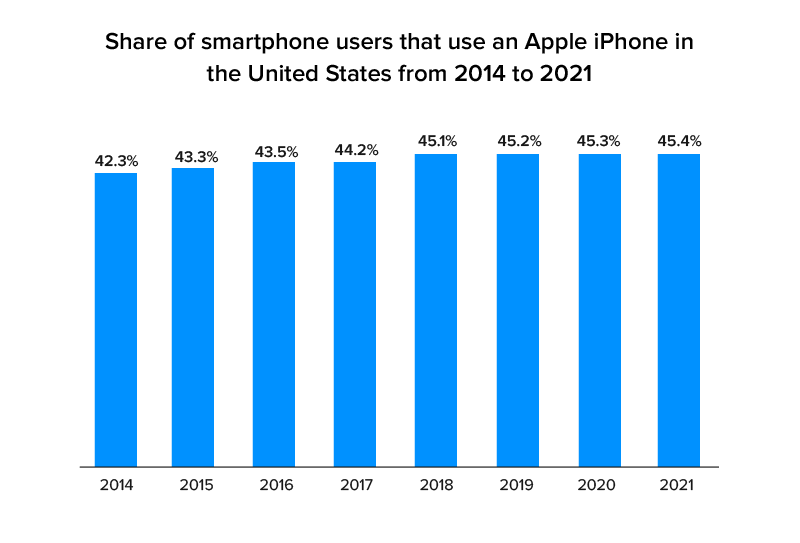 Top iOS App Development Trends For 2021 and Beyond

In 2020, we saw Swift 5 and Swift 5.1 entering the development domain as a better version of the iOS app programming language. It came with a number of reasons why businesses should invest in Swift 5, like:

While the details of Swift 6 feature sets are still under wraps, there are a few things that we can expect to get better this year – Better tooling with Package Manager and Swift Language Server at the center, work on accurate diagnostics, faster build, better-debugging support and memory ownership model, the addition of concurrency support in the iOS app programming language, etc.

One of the most exciting new trends in iOS app development is how it would build upon the Core ML updates that formed a great part of last year’s iOS app trends.

2020 updates around Machine Learning were planned in a way that reinstated that AI has now become a norm. This year will be no different. We believe that Apple will continue to build upon the improvements of 2020 Core ML updates –

Irrespective of what awaits for the ios app development domain, there is one thing that we can say with the utmost guarantee – we will be seeing a lot more intelligent applications entering the market.

But when we look at AR development specific iOS trends 2021, we can see that there are a number of reasons for the community to be happy about.

Last year, Apple introduced features like face tracking and depth capabilities to ARKit 4, making it easy for iOS app developers to place AR experiences at geographical points inside the apple. This year, we are anticipating that we will get to witness a greater connection between ARKit and Apple Neural Engine making virtual experiences extremely realistic.

On the IoT front, we are expecting to see Apple working on bettering the efficiency of HomeKit. We are likely going to witness iOS app developers using the HomeKit framework to configure accessories and creating actions for controlling them, triggering them Siri.

Although we don’t have any concrete statistics backing it, we are positive that 2021 will see watchOS, iOS, and tvOS apps getting integrated with the HomeKit accessories on a number that is much higher than the years that have gone by. By the time we reach the second quarter of 2021, the efforts being taken for HomeKit development will have made it one of the key latest trends in iOS application 2021.

One of the most promising iOS app development trends especially for an iOS mobile app development company would be the consistent bettering of the Apple cloud service. With over 1PB of free storage, developers can store their entire app data in iCloud backed by the functionalities of real-time syncing, simple sharing, and powerful services like authentication and server-side storage and scale. 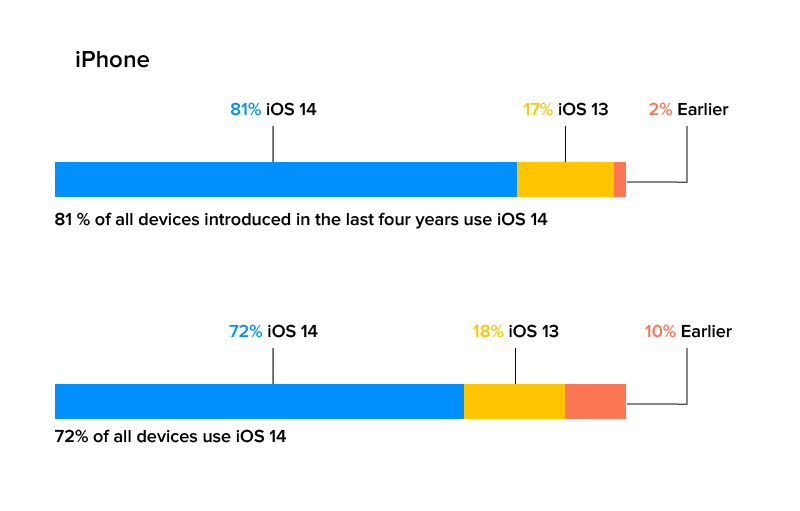 The features that iOS 14 was announced with was truly revolutionary in nature. Right from an overhauled widget experience to App Clips, an expansive set of ARKit 4 tools, and a range of privacy tweaks, iOS 14 set a new standard for customer experience.

While it’s too soon to talk about the features that will be introduced in June 2021 about iOS 15, we are sure that they’ll be as extraordinary as iOS 14’s if not less.

iOS application development services are renowned in the industry for their security features and the iOS 14 update reinstated the fact.

2021 will witness every iOS mobile app development company revisiting their development and deployment approach, ensuring that there is no loophole in the application.

Here were the different trends that we believe will rule 2021 and beyond. However, it is only time that will tell if these would dominate the sector or Apple will come up with some other revolutionary offering, setting the base for new future iOS development trends.