Why Should Startups Invest In Android App Development?

You as an entrepreneur would only want what’s best for your business in the long run, right?

Well, one piece of advice that we could venture you in is to go for the most popular mobile app development platform globally – Android.

One has to take into consideration several benefits of Android apps for business growth to conjecture why it is the right choice. Ipso facto, we should better get started with the statistics proving as a solid cornerstone to our argument on why Android apps for business are a viable option. With Android 11 getting prepared to offer their set of benefits to the businesses, the time is all the more of the essence here for choosing Android as a go-to approach for mobile app development for startups.

Since numbers work the best when calculating profitable pursuits for businesses, this graph below representing the market share of OS platforms is evidence enough. It is clear that Android has more voraciously captured the global market and has become the first choice of many hardware companies as well as users in general. 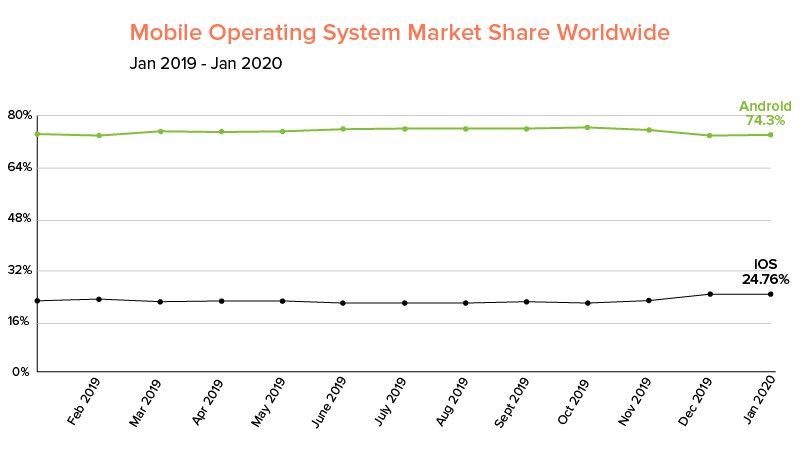 More statistics such as Google Play made almost 3x more first-time app installs in the third quarter of 2019 than the App Store, amounting to $21.6 billion during the quarter – a change that accounted for an 11% YoY increase from Q3 2018, are what make people invest in Android.

In fact, according to Sensor Tower reports, the Play Store generated $7.7 billion in revenue in Q3 2019, an increase of 24% YoY from $6.2 billion in Q3 2018 – a reason that justifies the android app development cost across genres. 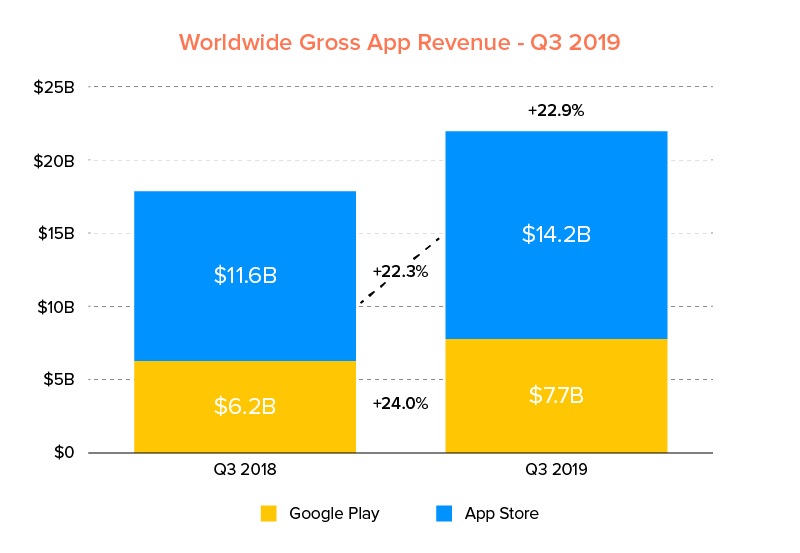 If you are still skeptical and unsure as to why develop an Android app for your startup then, here are some reasons that might convince you to firm your decision: 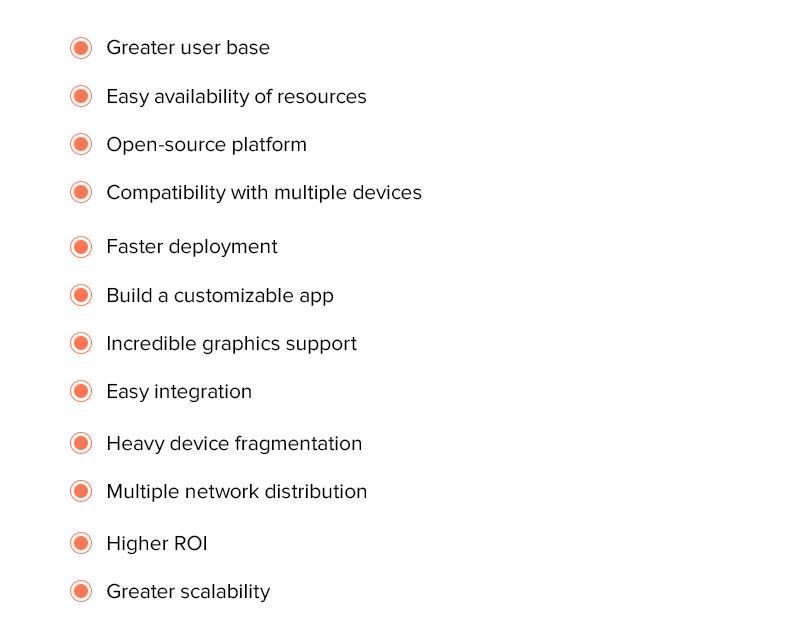 Today, most of the users across the world are using android mobiles. And from what we have read so far, this is surely the truth. The majority of users globally use Android-powered devices as compared to its contenders, which gives you a large pool of potential users.

Moreover, not having an android app for business means losing limitless business opportunities. No business can afford such a loss, especially when there’s cut-throat competition going on in the market. Thus, it is advisable to look for Android application developers to convert your website into an app.

Android application development services are primarily based on the base language Java. The programming language, one taught at the graduate level as a compulsory subject, makes it extremely easy for every android app developer for startup (even freshers) to adopt and learn.

For a startup, the fact that they have to spend less time and money on developers’ training makes Android the best choice for their app needs.

Android is an open-source platform. That implies Google doesn’t charge any fee for using this platform. In fact, Google provides Android app development tools and technology for free. Hardware device manufacturers such as Samsung, Xiaomi, etc., all use Android as their default OS. This is because the Android code is open-source and hence free.

This allows Android to capture the majority of the market. This also acts as a great factor in cutting the cost of the entire project. Although the android app development cost does vary from company to company depending upon multiple factors, the more devices you connect with the operating system, the greater would be the overall cost that your android app startup ideas will have to bear.

One of the biggest advantages of choosing an android app over iOS is that there’s no restriction on devices to be used for building an android app. You can build an app on Windows desktop, Mac as well as on Linux system. The fact that Android allows you to expand your brand across devices and systems makes it a go-to platform for all the sectors with interoperability needs.

As a matter of fact, Google provides application development tools and technologies for all. Moreover, submitting apps to Play Store is easier and the subscription fee of Google – $25 (one time) is much lower than that of iOS – $99 (per annum).

The duration of deployment for iOS apps stretches up to weeks whereas making an android app live on the Play Store takes only a couple of hours.

Another interesting fact or rather a primary pro of choosing android application development services is that it allows the android app developers to customize the apps as per the business requirement. This means your business app development will get done with the right requirements which might not have been possible with any other platform.

In a nutshell, no matter whether you are a product-based company or a service-based company, having an Android app for business is a must. It will act as a channel to reach maximum customers and hence improve your sales.

Another reason for choosing Android mobile app development for startup is because it offers amazing graphics support by providing incredible features. In fact, this is what makes it a perfect choice for Game app development, and apps that will be more centered around the graphics. The platform also provides support for 2D and 3D graphics.

In terms of integration, Android is a great choice indeed. Ask any android app development company and they will tell you how easy it is to integrate third-party APIs with your Android app. The ease, in turn, positively impacts the total cost and time of the app development towards a downward way.

Though it is true that fragmentation can lead to up to increased development cost and testing time, however, it has its own benefits to offer. The variety of devices that the Android ecosystem is made up of: smartphones, TV, home assistant devices, wearables, etc. inevitably points towards the big market all ripe and ready for you to target with your application. Unlike iOS, your app won’t be limited to just a set of devices.

If you look at the advantages of the Android mobile app development for startup, you will find that the apps are not just limited to the Play Store. Meaning, you can publish your app on other app stores as well, namely Samsung Galaxy Store, MI store, and so on.

Since you have such a wide market to target, the return of investment on your android app development for business would be instant and always on a higher end. From the time you publish your app on the store, there is a big pool of potential users you can tap into. All you need to do is devise a robust marketing and promotion strategy and follow best practices to get your app featured on the Play Store – processes that a sound android app development company can help you with.

This is another strong reason why businesses aim for becoming Android based startups. The platform is not limited to just smartphones, but can also be integrated into devices running on other technologies like IoT, AR, and VR. This provides a larger scope of scalability for businesses. It is this versatility that shows why businesses across the globe are looking for skilled android app development companies for startups.

Though it is true that Android and iOS are tough competition for each other, and deciding which to choose can be difficult since they have their own benefits to offer to businesses. However, even if you choose the benefits of android apps for startups over iOS, you can always try cross-platform development to target multiple platforms for expanding your reach.

Q. Does having an app increase business?

There are several reasons which back the fact that every business can flourish with more speed if it has a mobile app to support it. Every business needs a mobile application to grow. You ask why? Well, besides building an audience and creating brand awareness, a mobile app for startups can help them in assessing business growth while providing a competitive advantage.