Over the past years, we have seen the drastic change in technology and how the software development companies have brought new tools and methodologies to improve and enhance their performance. Continuous production is one the latest of them which has spread like forest fire.

In simple terms, companies like ours have started a practice to deliver multiple software codes in one day. This was not possible until just a few years ago when one software development process took months or even a whole year. This new change was seen in the recent past and we have ever since tried to adopt it.

Big brands like Amazon, Facebook, etc. have taken up this practice and has threatened other development companies with the rapid development. Some methods to do this is by adopting DevOps, Continuous Integration and Continuous Delivery. We will talk about all this in detail further in the article.

Times have changed for software development. A year ago companies used to take a month or so to release one software whereas today they have successfully come to the point where software is released multiple time a day.

In a survey, it was found that a percentage of the total software development companies didn’t produce any software in the year 2014. 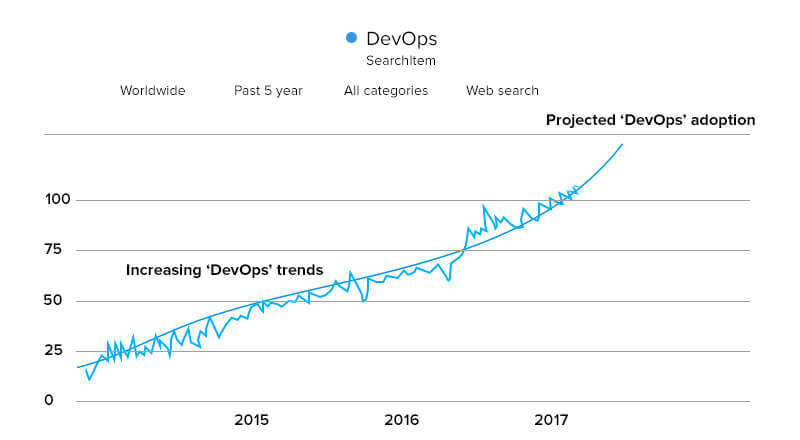 That is not the case now. The above chart clearly shows the rise in DevOps adoption in 2017 and ahead. In another survey, more recent, it was found that 57% of the companies in 2015 released softwares on a weekly basis. In that year they were expecting it to rise by 10% in 2016. And today in 2018, the practice has come to multiple software releases in one single day.

The rise was thought-provoking and we have found the reason behind it. Let’s look at them below: 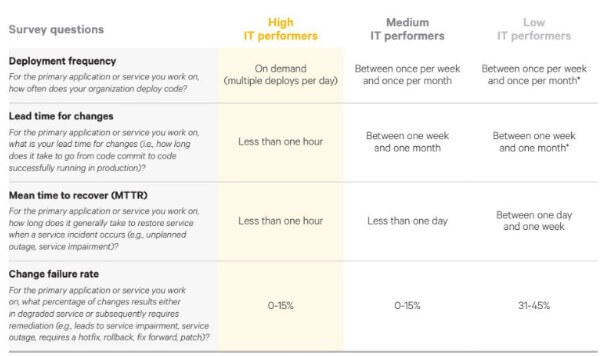 Big companies are doing it

When big companies are doing it, small companies tend to follow them. The fear that the big players will take away the customers is what drives the medium and small custom software development companies. One of the biggest mistakes some companies make is that they give all their time to designing which leads to either a delay in the delivery or compromise with the infrastructure of the software.

Here is how the big players are doing it:

Amazon– releases codes every 11.7 seconds on an average.

Facebook– moved their entire infrastructure to a configuration management platform.

Etsy– releases 50 times a day to it production resulting in less disturbance.

Our developers give priority to the infrastructure of the applications and then move onto the designing.

How are we doing it?

To get this long process done faster and without errors, we have come up with fantastic solutions. So, without any delay let’s get to them:

To empower integration, collaboration and automation among the software developers, DevOps was created. To enhance the speed and quality of the final product, we perform IT operations. DevOps is basically a combination of development and operations which means that both development and IT operations should work in a combined way to deliver products at high velocity.

DevOps is the most preferred cultural practice which helped the continuous delivery norm come into existence. This not only encourages teamwork in organisations but also has become one of the most wanted skill set in the development market.

Not integrating continuously may cause difficulty in finding errors which can slow down a project or even make it past the deadline. Some benefits of continuous integration are:

By continuous integration, we make sure that the codes put in by our developers test themselves and make sure it works to fulfil the purpose. These tests are called unit tests and when they are approved green signal is given which means we can release the codes successfully.

Continuous Delivery is an extension of Continuous Integration. It works to make sure that any changes made to the system can be released at any point with a press of a button. This allows the developers at Appinventiv create a software that matches the client’s demands for which changes can be made easily.

However, CD also has challenges which makes it hard to implement them in the process. The good thing is that these challenges can be overcome. CD is the way of releasing in a more risk free way and any developer who has worked with it knows how beneficial it is.

Continuous Delivery makes sure that the codes are prepared and tested automatically and can be released at any time. It has the following benefits:

What is in the Future?

The future is DevOps and Continuous Delivery. We have adopted these two practices and are already seeing improvements in automation, innovation and have a better feedback system. This is also enhancing the client experience which in return is increasing the sales and strengthening our position in the market.

It might be apt to say that the companies that will adopt these practices can only survive in the future market. The demand is clearly increasing for error free, quick and flexible way of development.

If companies follow the above points then they will see the same benefits that we have seen:

But above all, the biggest advantage is in competition. Very few companies are able to follow this for the reason of lack of the skilled team, awareness on the subject or simply because they can’t manage the work. This gives the edge to the competitors.

If you are, as company, willing to adopt the DevOps culture you can deliver faster, develop better and reduce chances of error.

The Impact of Employee Training and Development

Do you want to know the secret of making your employees stay in your company? The answer lies in learning. According to LinkedIn, 94 percent of employees would stay with a company longer if they were given the opportunity to learn. But why? Encouraging new thinking with a solid training and development programme increases employee…

Appinventiv’s Cultural Twist - How to Recruit & Retain Talent in Lockdown

The outbreak of COVID-19 has impacted nations in an enormous way, especially the nationwide lockdowns which have brought social and economic life to a standstill. The global crisis has brought new urgency to some of corporate India’s long standing challenges, and that companies which act now to address these priorities and adopt the “next normal”…

We Partnered With JobGet, the leading hiring app, to Solve Blue-Collar Job Challenges

The blue-collar job trajectory is increasingly becoming unattractive for the youths. The fact that the pay is lower than white-collar jobs and that physical labor comes with the image to be unpleasant adds to the stigma that surrounds blue-collar jobs. While unpleasantness lies at one end of the spectrum, on the other end lies a…