If you have been avidly following the news, you are probably aware of the havoc created by the COVID-19 outbreak. The world economy, which was quite stable and growing at the beginning of this year has, unfortunately, hit rock bottom on the top of the stock-market swoon.

As dismal as it is, we are standing on the edge of the cliff where looming recession can come any time to push us into the economic downfall, mirroring the situations that occurred in the economic downturn 2008.

Before discussing any further, I feel we should first clear the air around the “Recession” itself.

What accounts for a recession period?

It is a period in the business cycle that comes at a time when economic activities are in a receding phase. The typical examples of recession are the increased unemployment rate, declining average income coupled with consumer spending, peaking business failures, and of course, crashing stock markets. Nevertheless, recessions are an anticipated occurrence in the modern economy.

Speaking on the business front in detail, outsourcing is one of the things that businesses become more skeptical about during recessionary times. So we are here to change this perspective and open your mind to the various possibilities you can avail of by outsourcing your IT-based needs during the recession, which also includes outsourcing mobile app development agencies.

Companies that survived 2008 recession through outsourcing

The skepticism around outsourcing during the recession is quite understandable for many reasons. However, it is also an acknowledged fact that people tend to follow the footsteps some industry giants have taken.

In which case, let’s have a look at some renowned organizations who took shelter under outsourcing when the recessionary economy was forcing them to lose the money.

Apple Inc. has been known to outsource manufacturing from China; however, some are not aware of the fact that one in every three Apple engineers is outsourced. And the company continued its practice while the big economic recession of 2008 was going on. In fact, to date, Apple still practices manufacturing and IT outsourcing.

If anyone has created a lasting impact in the tech world it is IBM. While the company itself offers outsourcing for many purposes, it also outsources its needs from other countries and partnerships. In 2008, IBM signed various outsourcing contracts – a fact that can put many minds at ease.

One of the many companies to do IT outsourcing is Cisco Systems. The company sailed through the economic downturn turmoil by downsizing through outsourcing.

What makes outsourcing a time-tested solution to stay afloat during recession?

It is cost-effective – a plus in downturn economy

There are many benefits of outsourcing, and this is an important one among them. As opposed to the in-house team, outsourcing in a recession allows businesses to reduce costs for activities and duties that do not need a full-time team. And since you are outsourcing your part-time needs, you will be able to retain the employees who are more valuable to the company.

This is something which is also true for mobile app development since the hourly rates for developing mobile applications and digital products, in general, are way cheaper in the east as compared to the west. Plus, you only need to create an app once, so hiring an in-house team makes less sense.

One thing that’s a concern for employees besides getting fired is the loss of benefits, which to be fair, doesn’t play to the advantage of the business either. So, if you outsource departments such as accounting, HR, IT, and marketing, you can save up on the money since you do not have to pay them the benefits and offer them to your personnel instead.

When a business fires the low-level employees (an impact of the global recession), the pool of resources obviously shrinks to the minimum. In which case, all the low-value tasks, wantingly or not, fall on the shoulder of the higher-level employees hampering their productivity at best. To avoid such losses, outsourcing in a recession will come in handy and pose as a perfect solution, especially for startups or mid-sized organizations.

If employees expect one thing after the mass firing due to the downturn, it is the over-workload. It is obvious that responsibilities pile up on their desk with no time to manage things.

Such situations are catalytic for work-stress, which obviously diminishes the potential of a perfectly capable employee. Hence, outsourcing your needs is your ultimate weapon against stress, unproductivity, and all things alike disturbing the smooth flow of companies.

Recession or no recession – How to get started with outsourcing? 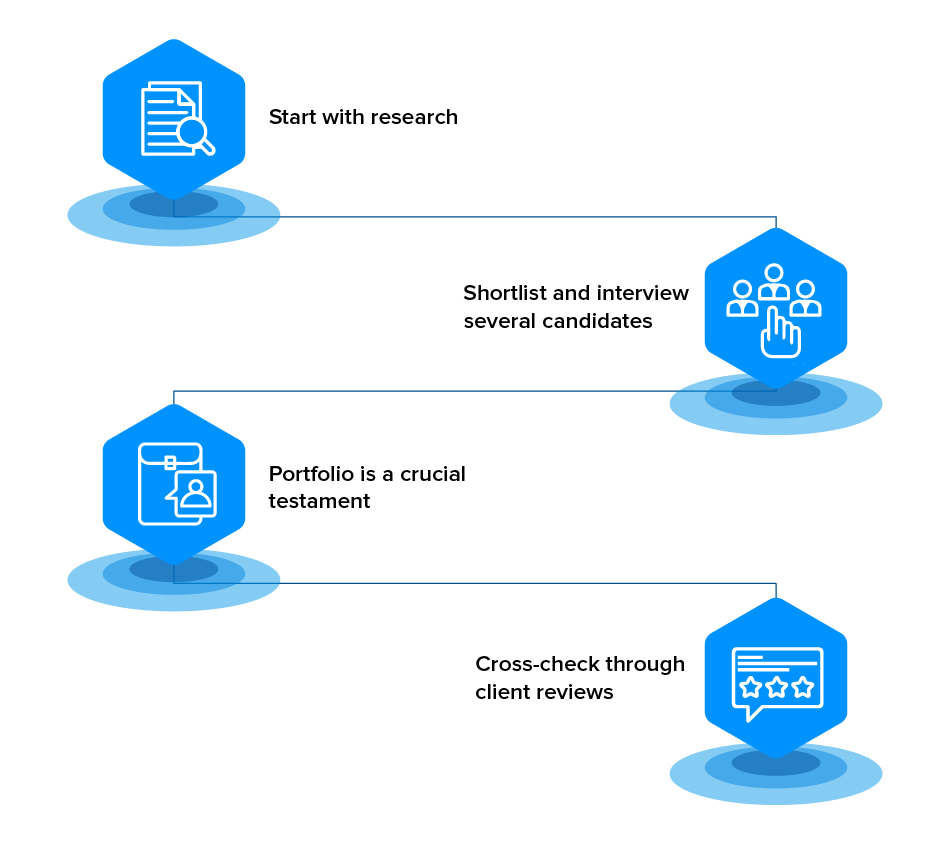 After everything is said and done, comes the question of “How to get started with outsourcing?”.

Especially for those entrepreneurs who are new to this concept, it can be comparatively challenging. So, let’s discuss how you can outsource with effective measures.

An obvious one though, you can start your outsourcing process by doing your homework. When you are looking to hire remote developers, browse on the internet and search, read reviews, and last but not the least, ask local businesses for referrals. You can also refer to some esteemed renowned platforms like Clutch for the most reliable choices.

Once you have prepared the list of most viable candidates, you can start by interviewing them by scheduling a call with each company. If it’s an off-shore software development outsourcing company, then video conferencing is an ideal way to go. It is important at this stage that you state your priorities, vision, and important elements to the companies to get an idea of whether they are fit to be your technology partner or not.

Portfolio is a crucial testament

It goes without saying how important it is for every entrepreneur to demand the portfolio from the selected company. The portfolio is something that provides insights into what kind of potential a company holds and whether or not it can fulfill your needs.

It is imperative for you to ask for client reviews since they can help you in comparing the difference between the promises/claims vs reality. Keep this in mind that best IT outsourcing and mobile app development companies would be more than willing and able to provide reviews. Once these conditions are met, you can seal the deal.

If you would like a more detailed tour on this topic specific to app development, then I suggest you check out our intense article “How to Outsource App Development? (2019-2020 Guide)”.

How has modern-day outsourcing evolved since the 2008 Grimness?

Almost twelve years have gone by, so naturally many trends in outsourcing emerging from the great recession.

To start with, ‘Recession-proofing’ future outsourcing contracts are a thing now. Meaning, contracts that are created now are more flexible keeping the point of the looming recession in focus. Back then, the contracts have been drafted restrictively that exploited the imbalance of bargaining power – which absolutely proved futile after the major changes brought by the black swan of businesses – recession.

Robotic Process Automation technology is yet incredible change capable of transforming the outsourcing market by bringing the costs down a notch. Since, on the mobile app development front, a pretty high amount of data is exchanged between the company and the clients regarding designs, prototypes, MVPs and whatnot of the product – something can be easily managed now with the advent of RPA and AI technology.

How can Appinventiv help you?

Appinventiv is a leading digital product development company with a distributed agile team of professionals. Our team functions across multiple geographical locations instead of one office space, which eliminates the risk of getting affected from economical situations. Recession or not, we never compromise on the quality of our services and products, posing as an ultimate choice for your outsourcing needs.

Q.  What is outsourcing in business?

Outsourcing is a process where organizations hire other service providers for certain business tasks and purposes.

The best time to start a tech startup was when the dot com era was becoming mainstream. The second best time is now. But the best time to go public is evergreen. In this article, we are going to look into the IPO process - one that is designed to effectively give a chance to…

The Non-traditional Funding Models to Consider for the next Quarter

The stock markets around the globe have been taking several punchings and pounds. The weeks to come didn't seem overly hopeful as well. The speculations around coronavirus outbreaks, declining oil prices, and the lowering gold prices are playing a massive role in scaring the stock markets and the investors alike on how dire would the…

A Guide on How to Hire a Team of Remote Developers

The first pillar of a tech-based startup success is always its software development team.  The competition in digital space is on an obvious rise. Meaning, if there was ever a time where you could pass the user acceptance test on a low quality or glitchy software, be definite that the time is long gone.  Today,…