Ways Electronic Health Records Will Continue to Improve in 2022

EHR systems have already come a long way in the industry. However, they can be improved for better patient care and information availability.

Electronic Health Record (EHR) is an electronically stored collection of patient-related information. Progress in the proliferation of screening tests, medical imaging, and diagnostics have produced a plethora of data on patient health.

There are ways to share information across numerous healthcare networks, for instance, providing the ability to offer a greater level of healthcare based on the ease of information availability and collection, to medical professionals.

Electronic health record systems are a perfect solution for better patient care. These days as more patient data is getting digital and an increasing number of consumers are aspiring to have mobile access to health records, the role of EHR is improving and digitizing in healthcare.

One can state from the fact that in 2014, almost 75% of doctors responding to the National Physician Survey were found to be using EHR. In 2017, the figure increased by 5.3 percent, i.e 80.5% of hospitals began EHR selection.

In general, the EHR features and framework has constantly been perceived as a surefire method of improving medical care frameworks.

In this article we will talk about the EHR implementation challenges over the years, benefits of electronic health records, and how technology is helping to overcome the issue for the year 2022. Hop on to the article, How to build an EHR system? Features and cost breakdown, to know how you can build one successfully for your business.

Based on expert opinions, here’s what the future holds for electronic medical record systems and trends in 2022 and beyond:

With the facts and statistics stated above, it’s evident that EHRs are expected to improve even more in 2022 for both providers and patients. But there are still some limitations that are being faced in the current situation.

With the healthcare sector moving towards technology in a fast-paced movement, it also needs to be aware of the risks associated with it. History is a witness for incidences where these types of technologies became prone to hackers because of being exposed to the internet without any security mechanism. Despite all the potential benefits that it provides, physicians still have a hard time adopting EHRs. 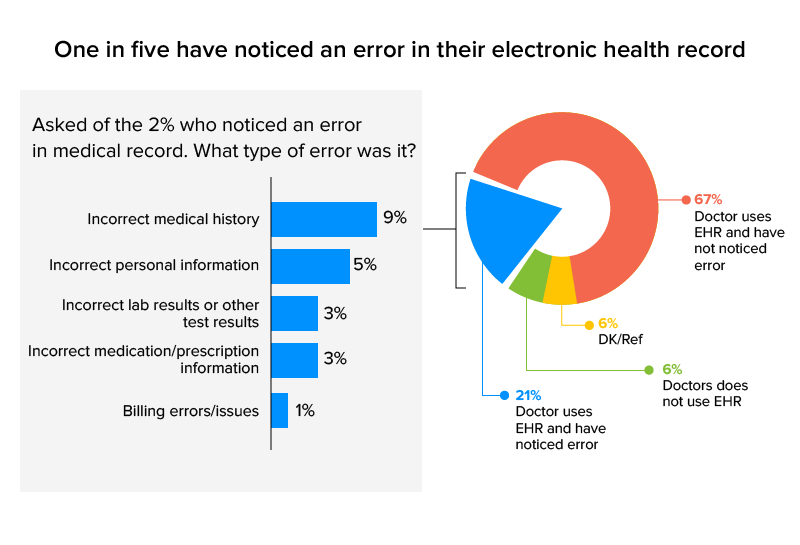 The most prevalent issue in the current healthcare sector is physical burnout. According to research, an estimated 50-60% of physicians have experienced burnout that resulted in lower patient satisfaction, reduced patient safety, and higher malpractice claims.

EHRs contribute to the burnout of physicians because of their hard-to-understand user interface. There’s a significant amount of time required to feed the data in EHR systems. Due to this, physicians don’t get enough time to work on communication with patients.

As a result, the quality of patient care is decreased and physicians also experience more stress and lower job satisfaction. Moreover, in multiple instances, EHRs are also said to be a financial burden on both the providers and practitioners.

Interoperability is described as the capability of EHR softwares to provide data and information to other devices so that multiple users can make use of it. 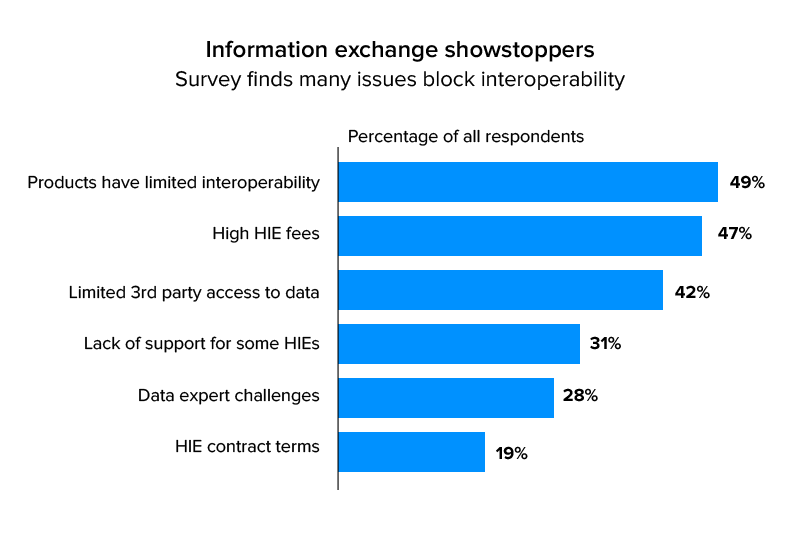 The issues ripple down to the EHR systems as well where challenges implementing electronic health records becomes a big problem because of a lack of interoperability between disparate systems. To get a complete picture of a patient’s medical history, it is imperative for the systems to communicate efficiently with each other.

Communication of data in an EHR often gets delayed because of insufficient interoperability inside segments of a similar EHR or from the EHR to a different system. There can be cases such as where clinicians couldn’t get to labs for an emergency or a hospital patient from records held in a different part of the hospital.

It remains an immense test for healthcare app development company providers to build an interoperable framework that enables the exchange of data among multiple providers.

Technology As a Boon for Improvement of EHR System

There are many factors that are affecting the adoption and EHR usability in hospitals and medical care practices.

Apart from technical issues like interoperability, the main concern comes from the issue of privacy and confidentiality and a lack of health information data standards. Technology is changing the face and future of  (EHR) electronic health records domain through automation and data storage and usage.

Voice recognition technology is a great asset for EHR systems as it helps clinicians to enter information and patient data hands free. It reduces inaccuracy and errors by dictating records in EHR which further speeds up the information recording process.

There’s a track record of Artificial Intelligence transforming the healthcare sector by helping doctors in recognizing historical trends about the condition of a patient and making diagnoses. That’s why several companies are trying to incorporate AI into EHR with the help of voice recognition technology.

For instance, a physician would be able to ask the EHR system about the last recorded iron levels from a blood test of a patient by using voice-enabled technology. After giving the commands, the system will notify the doctors about the health status of the patient. A working example of this is how  Northwell Health and Allscripts have already partnered to start developing AI-based, Voice-Enabled EHRs. It will be a very helpful system for providers with a very hectic schedule.

Specific healthcare app development services use AI-powered analytic methods such as statistics, data mining, and modeling in compliance with AI to provide clinical outcome predictions based on real-time device data and EHR to enhance the patient experience and care delivery.

The NorthShore University Health System has already developed a Predictive Engine for Clinical Analytics that works with the EHR system to provide more actionable information to clinicians about the patients in 2018. Known popularly as CAPE, the project uses critical information such as admission histories, lab results, and vital signs to generate a risk score for patients that helps in determining their likelihood of suffering from cardiac arrest.

3. Preparing Extensively for the 5G Network

It’s a no-brainer that the 5G network will capture the major share of the healthcare market in the future. There are several infrastructural updates going on in many residential areas to check the performance of the network.

While the majority of industry verticals are already prepared for 5G, a lot of people believe that the healthcare sector is not ready yet. The major reason for this incapability is likely to be the lack of compatibility between the 5G network and EHR optimization strategies. In case the shortcoming never resolves, there’s no use of the benefits and speed offered by the 5G network in the medical field.

However, not all the preparations are dependent on EHR optimizations. For example, there’s a 5G network tower installed in the Rush University Medical Centre of Chicago just because it didn’t want to manage the outdated wiring.

The scope for 5G in the healthcare sector is immense with offerings like real-time data monitoring, telemedicines and so forth. That is why people are looking out for the best healthcare app developers to enable better healthcare delivery.

The preparations for the arrival of the 5G network are expected to pace up very shortly. As it happens, the authorities also need to determine in what way it will affect EHR and several other aspects of patient care.

4. Moving to the Mobile and Cloud

As you may already know that the major benefit of having an EHR system in place is the ease of accessibility of patient data, it completely makes sense that the data will become more complex as the population rises.

This calls for the need for mobile-computing and cloud-based infrastructure to store and access the data in a safe manner. This will allow healthcare professionals to access the data with a tablet or a smartphone and helps them be more productive in their clinical environment and provide mobility solutions for long term success. 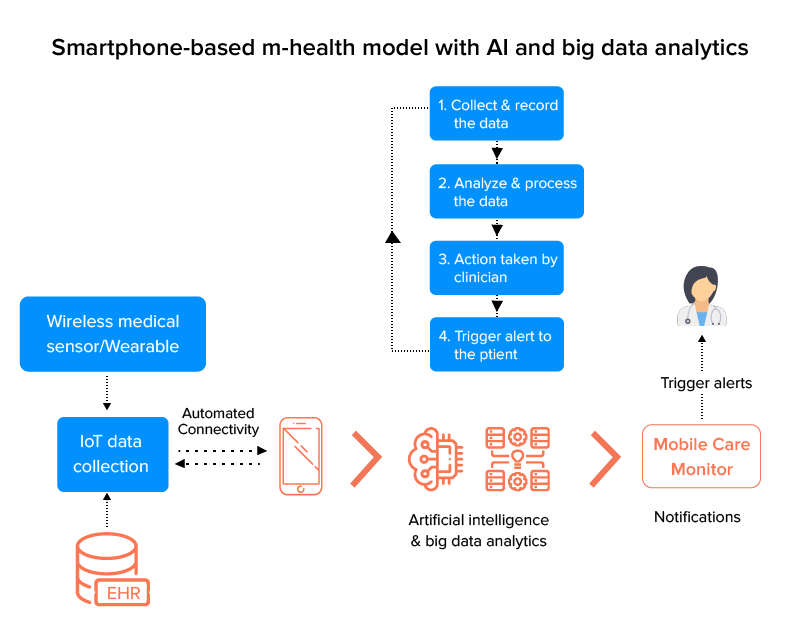 Moreover, as the privacy and security challenges start solving, a major portion of electronic health records will be stored in the cloud. With that said, the mhealthcare sector will also use gadgets such as smartwatches to upload and track patient information automatically and allow remote monitoring of the patients.

[Also Read: EMR Vs EHR Development – What Should you Choose for your Healthcare Business?]

The Future of EHR

It’s evident that EHRs have already come a long way in the industry. However, there’s still a lot more to achieve and the future holds numerous benefits for electronic health record systems.

Healthcare mobile app developers will be soon seen using the model of value-based health care to answer How to Prepare for EHR Optimization. Do you have an idea around betterment of EHR process and making it future-proof? Share it with our business consultants.

AI has not taken very long to make an impact across industries. And, the healthcare industry is no different. Healthcare providers are using AI to assist patients around the clock. Patients are able to receive the required information as and when they need it and have a better healthcare experience with the help of a…

How to comply with HIPAA in software testing?

Disclaimer - The article only covers major HIPAA compliance software testing areas and not elements like physical safeguards such as non-deployment of software on workstation with open screens. Also, do note that the strategy will depend on the app’s requirements, meaning it won’t be applicable for all the applications. Healthcare organizations are falling victim to…

Building a custom LIMS software - Understanding the Why's and How's

Laboratory Information Management Systems (LIMS) is a solution used in laboratories to automate recurring tasks, and manage lab samples and related data. An LIMS system assesses every step of the process, from the moment the samples arrive to data recording, storing, reporting, and archiving.  Due to its efficiency, LIMS software development makes its way into…