How to create an app like Signal has become a new inspiration for entrepreneurs but what’s the cost of developing such an app?

On January 6th, WhatsApp made an announcement which caused a massive uprising against the application across the world.

The announcement which asked users to share personal information with Facebook led to a massive number of the app’s users turning against it and instigating mass uninstallation.

While on one hand, WhatsApp had to resort to damage control by advertising how its updated policy doesn’t compromise on users’ data, Elon Musk tweeted 2 words and the fate of WhatsApp took an even dire turn.

The two words were Use Signal. And the messaging platform lurking in the shadows of WhatsApp suddenly came strongly to the forefront. Its encrypted messaging feature got people’s attention in no time.

The result of the tweet was two-fold – on one hand, the user base of the Signal messaging app increased to a massive level and its downloads climbed up by 4200%, on the other hand, how to create app like Signal became the new inspiration for entrepreneurs looking to enter the heavily profitable domain.

Today, we are going to find answers to the one question that a number of entrepreneurs have started asking – How much does Signal like app development costs.

Before we get into the features and Signal app development cost elements, let us first look into the WhatsApp announcement that led to the sudden peak in the Signal registrations. 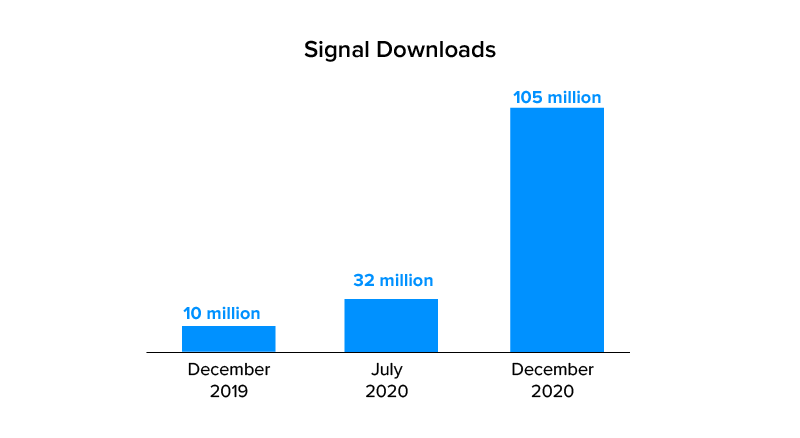 What Was the WhatsApp Announcement About?

WhatsApp told its users on January 6th that they will have to agree to let Facebook and its subsidiaries collect WhatsApp data – including location and phone numbers before Feb 8 or they might have to lose access to the application.

A Sensor Tower representative said, “From January 6 to January 10, Signal saw approximately 7.5 million installs globally from across the App Store and Google Play,”.

WhatsApp has since then been taking measures to reinstate that the move will not leave users’ chats unprotected. They also clarified that the effect will only be seen by users outside the EU and UK.

What Are the Must-Have Features for Signal Like Application?

There are a number of features that contribute to the process when you build a chat app like Signal. While 80% of them are the same as any messaging platform, there are a few elements that make Signal special as every social networking app development companies would tell you.

Let us look into what they are. 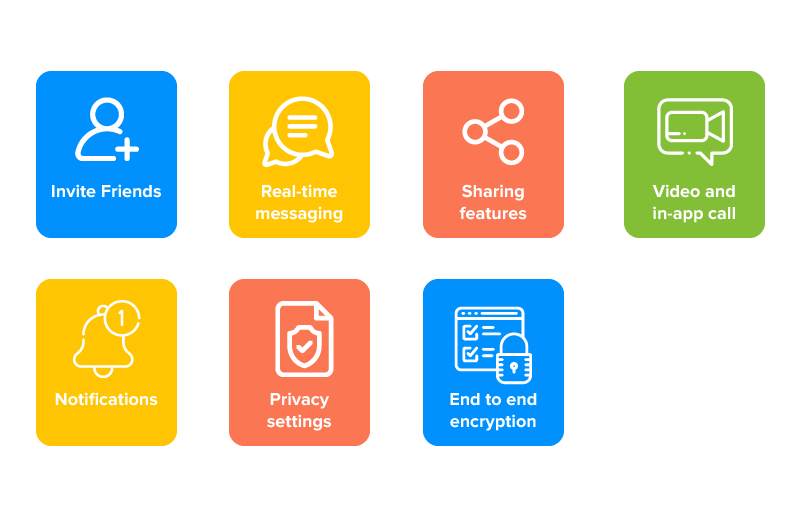 The option to invite friends and start a new group is the first thing that users see when they open the Signal social media app. The invite friends option, which we consider a must-have functionality asks users to give the app access to their contact book.

At the core of the Signal app features lies the functionality of real-time messaging. Signal enables users to interact with each other from around the world in real-time, without any evident concurrency issues.

Signal private messenger app makes the sharing process easier for the users by giving them the option of sharing documents, contacts, media (images, videos, and GIFs), and location with their contacts or in a group.

Calls have become a must-have feature of today’s messaging platforms. While once limited to text messaging, today users are demanding the facility to make video and in-app calls to their contacts.

Devising a strategic push notification strategy is not difficult for the messaging apps domain. The application only has to show messages, call and missed call prompt, and when it’s time to back up the data. Signal, however, gives users the option to turn off lock screen notifications on their devices.

The Signal chat app comes backed with a series of privacy settings like screen lock, incognito keyboard, etc. Following WhatsApp’s failure to give users a guarantee that their data will be secured, privacy settings like these are poised to become a must-have element of answers around how to create app like Signal.

End to end encryption is one of the top ways to secure a mobile app. The open-source end to end encryption feature of Signal private messenger app makes it impossible for telecom companies, advertisers (Signal doesn’t allow advertisements in the app), and even Signal to read users’ chats or view their activity.

While these are some of the must-have features for Signal secure messaging like application development, there are a number of other features that are native to Signal but absent in other messaging apps. Some of those are Disappearing messages, Safety binary numbers that one can cross-check with their contact’s to ensure that there’s a complete end to end encryption, group chat with 8 users, and voice record functionality.

The privacy and security of Signal are one of its key selling points and also one of the prime elements of Signal like app development cost. So in order to know how much does it cost to build a messaging app like Signal, it is first important to know what makes it truly secure.

How Does Signal Encryption Works? 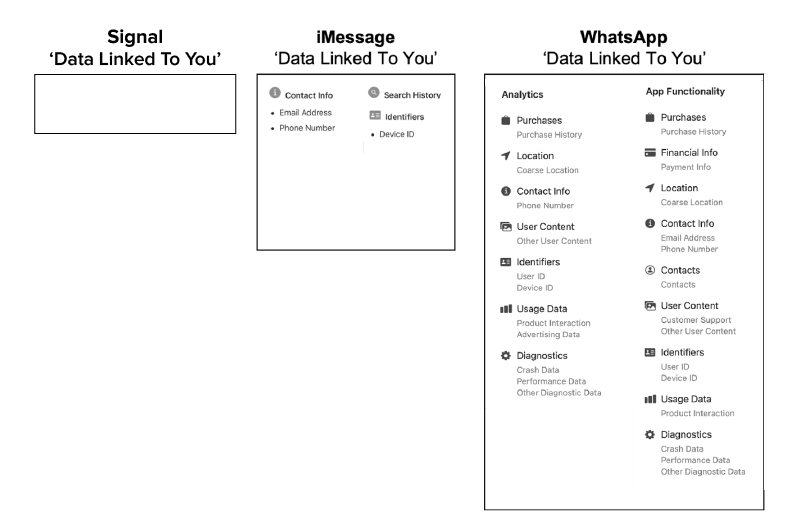 The uncontested reputation of Signal privacy backed by high-profile users like Edward Snowden and Brian Action is something that is leading the onset of a new movement – one where users’ chats are kept truly private and encrypted.

Here’s how the most secure messaging app of 2021 works.

With most encryption systems, when an application is installed in a phone, a permanent key pair is created. The pair is then used for encrypting and decrypting messages: one ‘public’ key is sent to the messaging server and is used to identify users, and the ‘private’ key never leaves users’ phones.

If the private key gets compromised, messages become prone to decryption and misuse.

The protocol that Signal uses changes the key after every message by generating multiple temporary key pairs for users in addition to their permanent keys. When a user sends a message over Signal, the application merges the permanent and temporary pairs of private and public keys for both the users and creates a shared secret key which is used for encrypting and decrypting the message.

Since the generation of the secret key needs access to the users’ private keys, it lives only on their devices. And Signal’s protocol system of the temporary keys – where it constantly replenishes keys for every user – enables the app to get new shared keys after every message.

Besides the encryption protocol, there are a number of other things that make Signal fairly unhackable –

How Much Does It Cost To Build A Messaging App Like Signal? 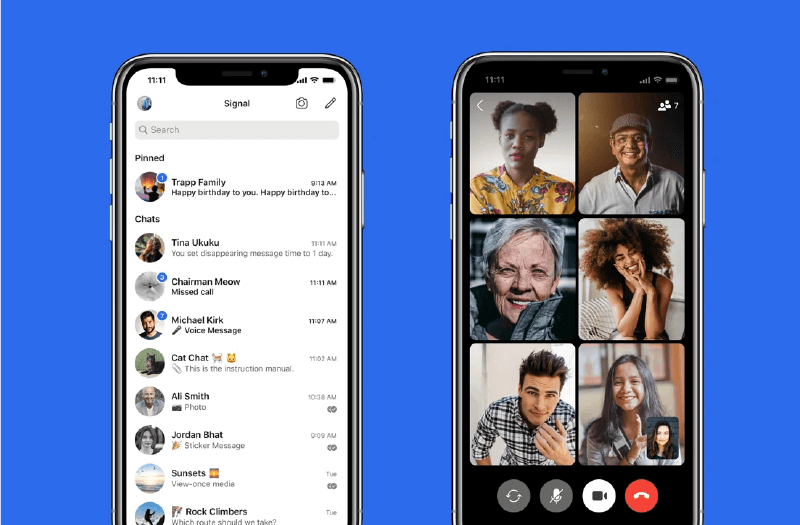 When we talk about Signal specifically, imitating the same feature set will prove to be on a higher side. So what we recommend is to create a messaging app MVP and add the encryption protocol in it. This way, you will be able to test the waters before launching a full-fledged application.

Now that we have reached the end of the piece, let us throw some light on how you can earn money at the back of your Signal like application.

How Can You Earn Money From Your Signal-like Application?

It is extremely difficult to answer how Signal makes money because it doesn’t. It is a non-profit business meaning they stay afloat from government funds and donations. While this is a noble stance, it can make it difficult for entrepreneurs to enter the space.

But then with in-app advertisement out of the picture, since that is what raised havoc on Facebook in the first place, what other options do entrepreneurs have?

An option that you can explore is extending your brand to enterprise users. You can create a version specifically looking into business communication needs with features like third-party integrations and on-premise deployment.

The key to whichever way you finalize to make money from your app, ensure that it doesn’t go against the moral value of the application. It should not put users in an if this then that situation. You should have a workaround to give users the same experience whether or whether not they share their data.

The creation of a Signal-like app is in many ways different from building any other messaging platform, both on a business and ethical level. You will have to ensure that the application respects people’s privacy and that there is no loophole for data to flow out from. Let us help you create a business plan, contact our team of social media experts today.

How much does it cost to build a mobile app in the UAE?

All thanks to technological advancement, mobile apps have become the most dominant form of digital communication. Playing the most vital role in the overall success of a business, they are capable of offering the amenity of access on-demand to information and solutions. Now, mobile apps are one of the latest and most adapted marketing methods…