How Much Does Anonymous Social Media App Development Cost?

Social media networks take multiple forms to keep up with the users’ changing demands. One such form is anonymous social media.

As per Wikipedia’s definition, Anonymous social media app development is a subcategory of social media whose main social function is to share and interact around content and information anonymously on mobile and web-based platforms.

Is There Anonymous Social Media?

Started in 2014 with Whisper, Secret and other ways, anonymous social media started off as a fun experiment but grew on to become a popular entertainment and social connect option for users who craved privacy.

Even after 5 years of its existence, anonymity apps have found themselves standing strong in the online world, even though there are negative connotations surrounding it.

The people who frequent these apps are mainly those who want to take measures to not get tracked by advertisers, employees, government, or simply people from their past. This need to exist anonymously on the internet and on social media is what has kept the attraction for the anonymous social media market high.

These apps are one which only offers one functionality – send chats to others anonymously, without revealing the true identity.

This is the category which Whisper and YikYak generally belong to. They allow users to send different types of content with other users in the app, anonymously.

Irrespective of what type your anonymous social media app belongs to, there is a set of information that you will have to protect in order to maintain the anonymity factor. Let us look at what those pieces of information are before we move on to the technical side of apps like Whisper.

What User Information Should You Protect?

To know the information that has to be protected to keep the integrity of apps like Whisper intact is just a part of the whole application development. There is another crucial side to it – The features set.

When you invest in the development of a Whisper like application, you have to focus on not one but two versions of the application – A. Of the Customers’ Side B. Of the App Admin’s Side. 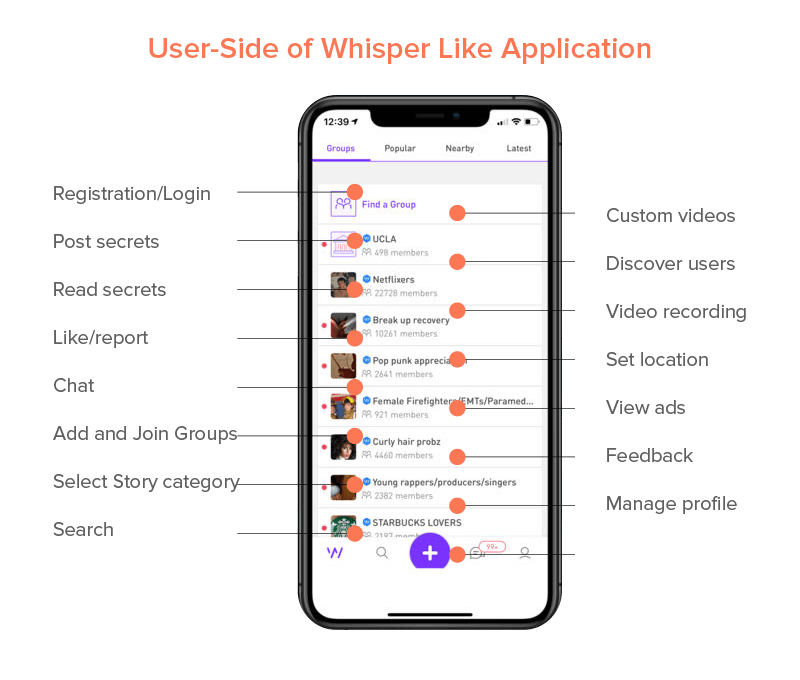 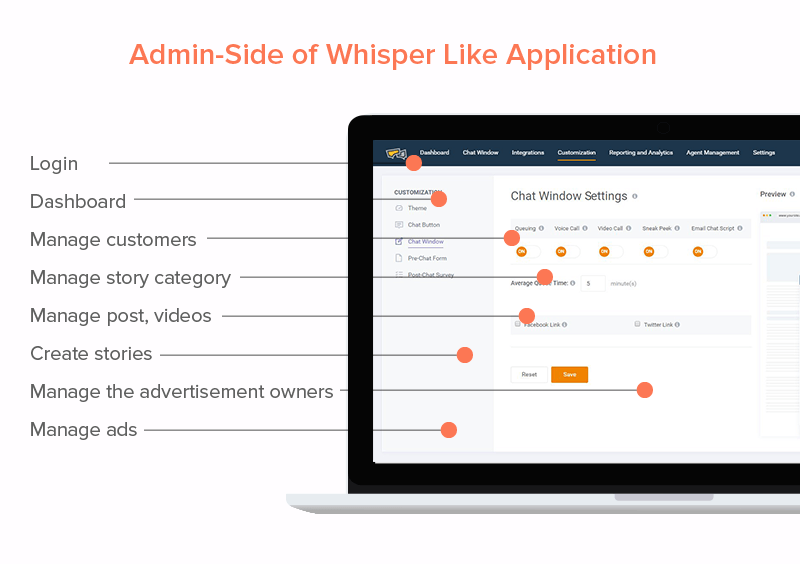 While these are the must-have features that your Whisper like application developers will be working around, there are a few other features as well, which would be inherent to your whole Whisper like app development process.

Anonymity is the one feature that the application is based upon. It gives the freedom to the users to post and share their feelings with the other users without getting their name revealed.

To maintain anonymity, a nickname is given to them by the system. This way they get to interact using their system generated names instead of the actual one.

These are a pivotal part of any anonymous social app. Only when you have a chat log system in place you will be able to take necessary measures against people, if found

The feature facilitates real-time reporting of how people are interacting with the application. By combining analytics and real-time reporting, app admins will get access to users registrations, most engaging posts,  ads tracking, etc.

Integration of cloud storage in the app not just helps in keeping the data secure but also ensures that every activity surrounding post upload, modification, reporting, etc. happens in real-time

Whisper app comes with a functionality that makes it possible for the users to see what people around their geographical location are sharing. For this purpose, the app makes use of a location tracking feature.

Admins should be able to access the number of users who are logged in a system at any given point in time.

How Long Does It Take To Build A Social Media App?

Building a social network app relies upon your degree of expertise, choice of platform, tech stack, and time that you will invest daily to build the app.

Honestly, an application created from scratch stands apart among others with its remarkable design brand, and functionality. But such an application is probably going to require time and cost. So, The answer to how long does it take to build a social media app and how much it costs all lies in the type of app you want to make.

To make an app you need to catch the feature list, make detailed prerequisites and scope of the application. On the off chance that you or your social media app builder is good at it, then you can do it in around 2 weeks or less for a small application, 2-3 weeks for a moderate sized application, and almost a month for a bigger application.

Before starting the development journey, you should take a look at other applications in the market and choose what features are significant for your application.

How Much Does It Cost to Create a Social Media App?

Based on Whisper Like Anonymous Social Media App Development Cost

Estimating the mobile app development cost of a complex Tinder like app or a semi-complex application like Whisper can come across as a challenge for there are a number of intricacies involved.

However, it will be possible for us to give you an approximate range on the basis of the feature set mentioned above.

And that range of whisper-like app development will be approximately from USD 61K to USD 81K.

However, do note that it is simply an MVP range of anonymous social app development cost, which would increase as the features set are increased in number.

Now that we have covered the market, technicalities, and the answer to how much does it cost to create a social media app, let us look into the factor that would determine the success of your anonymity based social media app.

No matter how well-designed and robust your app development process is, it will all go downhill very soon if you don’t have the necessary measures to keep cyberbullying in place. For there are a number of people who can use the opportunity of anonymity to create a lewd and inappropriate situation for other users.

Here’s how you can ensure that it doesn’t happen to you.

But before we go on listing the measures, let us first answer a pivotal question – how will you track the culprit when everyone is anonymous?

In Whisper, it is impossible for you to chack anybody’s profile

But you do, in fact, get push notifications on your devices when someone likes or replies to your post. It means that the app knows the device it should send notification on even when the information was not asked when you were logging in.

In the case of non-login apps, like Whisper, it is not possible to get their name or email address.

In order to track anonymous users, the social media app developers would generate the token or unique user_id that would be associated with the users’ device. When the user accesses the app from some other device, new code or token will be generated and a new entry will be created in the database.

The user_id and all the posts that are made from it are stored in the backend, making it possible to send notifications when somebody performs an activity on them. It is also possible to access the users’ location using the app’s nearby feeds.

There are a number of anonymous apps which, although allot a nickname, require user details to enter the application. In this situation, tracking works like any other social media app.

Now that we have looked into how to track anonymous users, let us look at the prevention side of the app as our parting note.

How Can We Prevent Cyberbullying in Social Media Apps Which are Anonymous?

When not tracked, your whisper-like app can become the house of a number of illegal activities that can take your brand image down very soon.

But only on the back of a few measures, you will be able to be a part of an application where people are safe. Here are those measures.

Users should be given the ability to flag the posts that are inappropriate. And then the admin can perform a necessary action of those posts and the user who posted them.

There are a number of apps that are developed in a way that they are restricted in some geographical locations like schools or offices etc. By applying the facility in your app you too will be able to limit their usage in places which are the breeding ground of bullies.

There are a number of posts which are difficult for machines to identify and categorize as harmful. In this case, when it comes to social media management, human’s involvement becomes absolutely necessary, for they are better able to gauge the state of the post. At Appinventiv, one of the known social network app development company in USA, you will get a chance to know the social media tools to build anonymous social networks.

Now that you have looked into everything that is needed to get on the journey of anonymous apps like whisper development and have the answer to how much is the cost to build a social media app, the only thing left to do is actually get on with the process. Let us help you.

Fill in the contact us form below and our team will get in touch with you shortly.

From the users’ point of view, yes anonymous apps like Whisper and Yik Yak are truly anonymous. But on the admin or parent company point of view, they are not. It is not impossible to identify the users who post content or make comments on other users’ posts.

Q. What are the best anonymous apps?

There are a number of anonymous social applications that are being widely used in the world which demand secrecy and anonymity. Some of the top ones are:

How to build a social media platform like Yalla app?

What started in 2020 has today become a global sensation. There was a time when the social media app category had fallen into a rut. Every new application was having the same feature set - image sharing, messaging, voice/video call, etc., then came 2020 and an app became the new sensation. The app was Clubhouse. …