The Secret Behind Apps That Go Viral

Development of an Addictive App that gets its first thousand users straight under 24 hours of its app store launch, is believed to be a privilege that is only bestowed upon the brands that have already established themselves in the crowded market, like Rovio or King.

However, the belief is far away from the truth. Every brand that knows the formula for creating an app that gets hooked in users’ minds, can become the next Rovio or King or much bigger.

But, is there a secret formula behind giving the users exactly what they need? An app that they would not just become a regular user of but would also make their friends and family follow with same dedication?

Here is the secret, backed by human psychology, to developing addictive apps…

In his book Habit-Forming Products, Nir Eyal attributes app virality to the elements of a circle, which he calls a hook model.

The model helps understand the human psychology that works at making an app viral in the market.

Let us Look at the Model that Paves the Roadmap to Develop Addictive Apps:

The model portrays that there are four elements – Trigger, Reward, Action, and Investment which run in a circle and together lead to the conversion of an app or a product into a habit. Thus, making an app the most viral app in the app store. 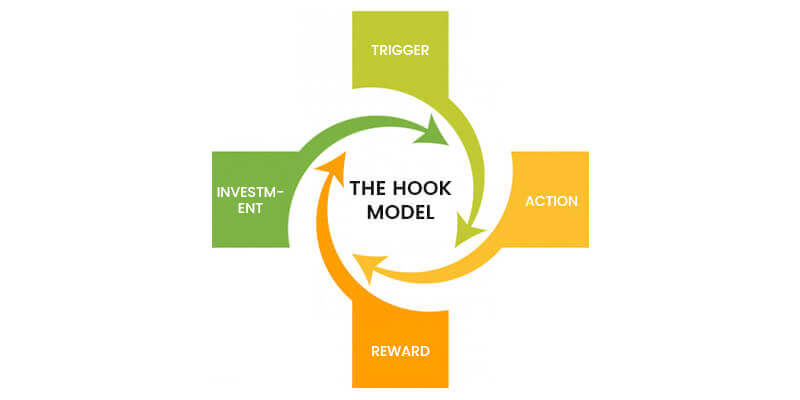 These are the four elements explained in detail –

Trigger: For an app to become an addictive app, it should be able to hook the user using triggers. The triggers, which are divided into –

External Trigger: These simulations are based entirely on the outside information. Those triggers could be an ad image, notification,  a review or rating, recommendation, emails, or CTA buttons etc. These are how the user reaches an app or gets triggered to use any of the app’s functionality.

Internal Trigger: These are mainly the reasons behind the development of the app, i.e. they define the real intention behind the creation of the addictive app. For example: The apps could have been the response to users’ boredom (Social Media/Games/Music or Video Streaming), need to productivity (Slack), or for making a difference by introducing a unique concept (Sea Hero Quest).

Action: Once your users get the push, the time comes to take a planned action. Now, the action entirely depends on the users’ ability and motivation. When the user’s desire to take action comes in sync with their capability to do so, it brings you one step closer to the realization that you have developed an addictive app. Just take a simple, real-time scenario.

To develop addictive apps that mix motivation with ability, ensure that your app has bare minimum hooks to help keep all the users invested.

So what you can do to ensure that you hit upon motivation and ability at the same time? You do this by offering features even when the internet is low. Plan your app in a way that the users are able to work around the app even when the speed and network conditions are not in their favour. Allow them to continue what they were doing when the network reestablishes.

Reward: For doing even the simplest of the action inside the app, the user must be rewarded. The reward can be anything – appreciation, a form of acceptance, or special attention, all in return for an action, which they perform within the app.

Here is an example to explain the point:

Suppose you are enjoying your time in a puzzle game app and after reaching the 50th level, you get a notification saying that you are top 5th player of that round and then soon you start seeing praises flowing in from all directions in your notification feed and you get 5 extra lives to use in the game.

The puzzle game here is offering you appreciation in form of the extra lives and attention in form of all the messages you are getting from the other users.

You can offer a reward through your app in any form. For example:

Investment: as soon as the user gets hooked on the app, they start investing. The amount of investment user has is directly proportional to their reaction towards the hook. The blend of triggers, ability, and motivation together create Hook, which is what keeps your user invested in your app. Hooks are the features that keep your users coming back to your app. They can be anything – Name Mention Tweets, comments/likes/share on Facebook, live stories on Instagram, or picture filter on Snapchat.

Good hooks work, irrespective of with what intent the users are involved in the app with.

So now that we know how the users’ psychology works and what elements your app must have, to make the users get hooked with it, let us now move on to looking into some other time tested ways that are known to have set the standards for the top mobile app development companies.

1. Develop Something That Users Would Get Inclined to Share 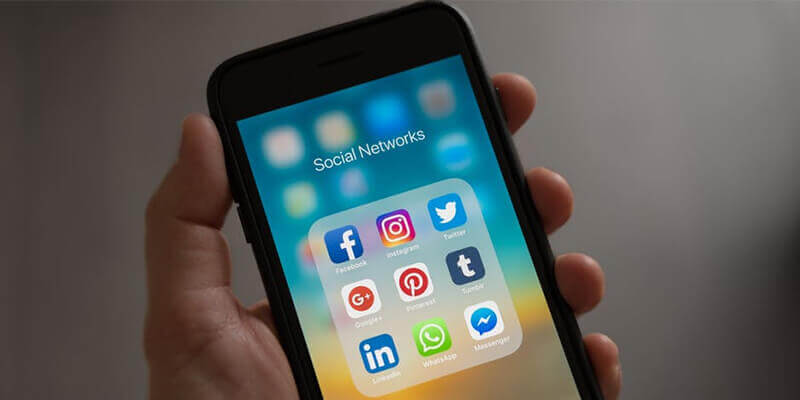 The number one way of getting the users hooked to an app is through giving them an app that they would love to share. Now, the kind of apps that users tend to share have either of these three and at times a mix of these features –

The route to offering all these features starts with a valuable app idea, the one that users would get some benefits off.

The mobile app time belongs to the millennials. A generation that is impatient, loves everything that has a buzz and craves being updated with everything that is happening around the lives of people they admire or are even remotely acquainted with. 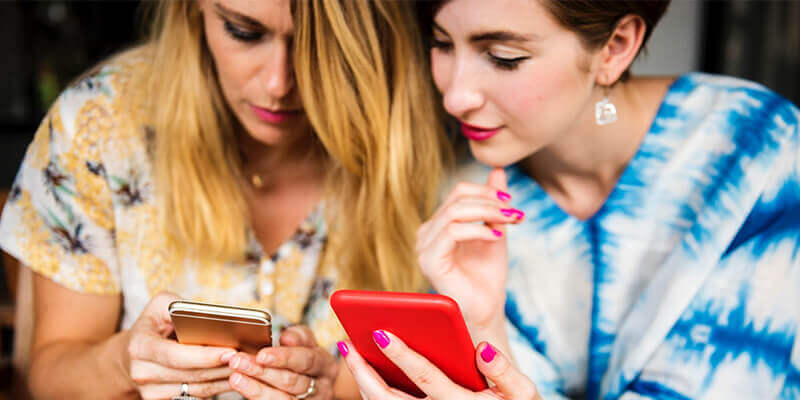 Snapchat, one of the most popular social platform, got their first 10,000 users through word of mouth of high school students and as the history of Facebook goes, the app was first launched to enable students to rate their classmates and schoolmates.

So, to successfully develop an addictive app, find a way to include millennials in it, one way or the other.

3. Have Sharing Buttons Visibly Present in the Right Places

The no brainer but sometimes gravely ignored secret of creating an addictive app is having sharing button placed at steps which the users would want to share. 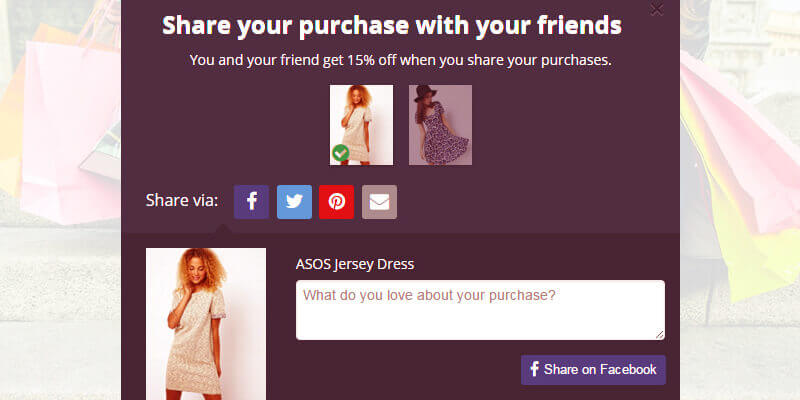 How many times have you visited a mCommerce site, liked a product but have not been able to share it with your friends in a single click because the social APIs are missing? I am sure it’s a common occurrence. As users, we always end up copy pasting the product page link to another window.

If you want yours to be an addictive app, it is time to enable single click sharing to social platforms in your app.

4. Get a hold of your app analytics

You can only keep the users hooked to your app when you know why they are leaving in the first place. The right set of tools when integrated into your mobile app, will give you the numbers and highlight the problem areas.

Every information related to – the stage where your users left, the season in which your app saw maximum uninstalls or bounce rate, and even the acceptability of your app sharing reward can be measured and acted upon in time using the analytics. 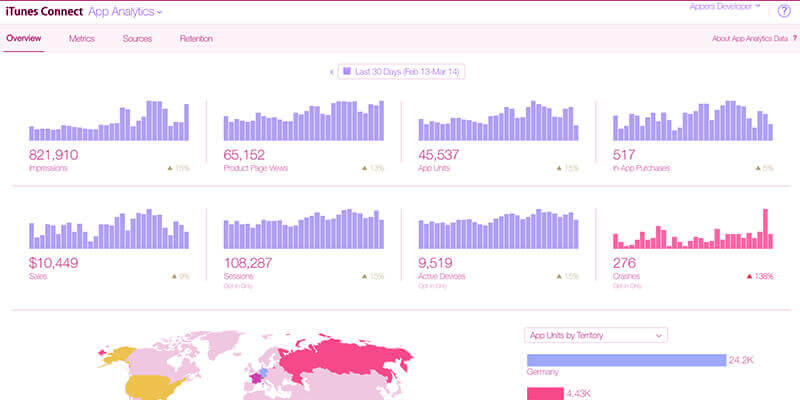 While there are a number of other ways you can make users get addicted to your app, our secret as the top social media app development company for addictive apps, has been the inclusion of features that – make an app useful, make it different from what the users have worked around, and offer something that the users need in return of them sharing the app with their friends.

Although the framework, language, and tools that go into the development of an addictive app in no way different than what goes into creation of apps that get uninstalled after two runs, what brings in the difference is the development process that is followed and above all the app idea.

If you have an app idea that you know people will fall in love with, contact our team of developers who have developed apps that have hit the million download mark, today.